With assorted scissors trim as much watercress as you like, let it nest on the warm ash bread served with a pinch of Maldon salt and a meringue of each - a lightly whipped smoked and buttermilk butters. This delectable gardening will keep you busy until the first course arrives.

Ecco on Snow is now the best restaurant in the reach of St Moritz. Shaped by talent and precise sensibility to natural ingredients, chef Rolf Fliegauf and his team create an almost magical gastronomic moment. Well deserved two Michelin stars. 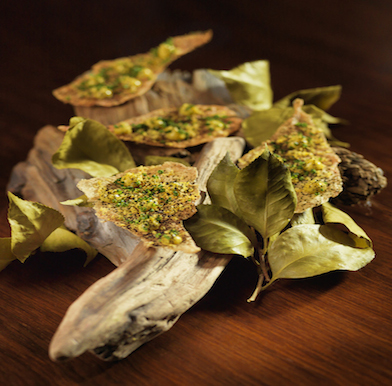 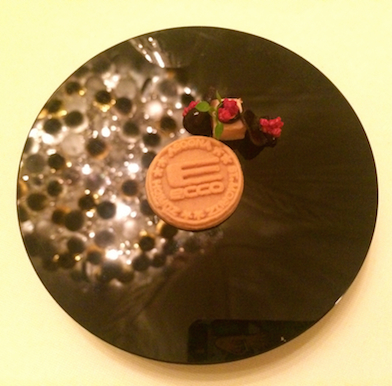 The 34 years-old chef at Ecco has developed a fine palate translating the intensely balanced flavours brilliantly in his contemporary European odyssey. The Swabian German, Rolf Fliegauf deserves the two Michelin “macaroons” for each, Ecco on Snow in the hamlet of Champfèr next to St Moritz for his winter craft, and his genie with the summer ingredients in Ascona, an ochre old town touching on the fairy Lago Maggiore dividing the Swiss-Italian border. With the flip of the seasons he personally cooks at both. Et Ecco, you get no flying chef of Ducasse and Robuchon type, but an honest participation of the chef. 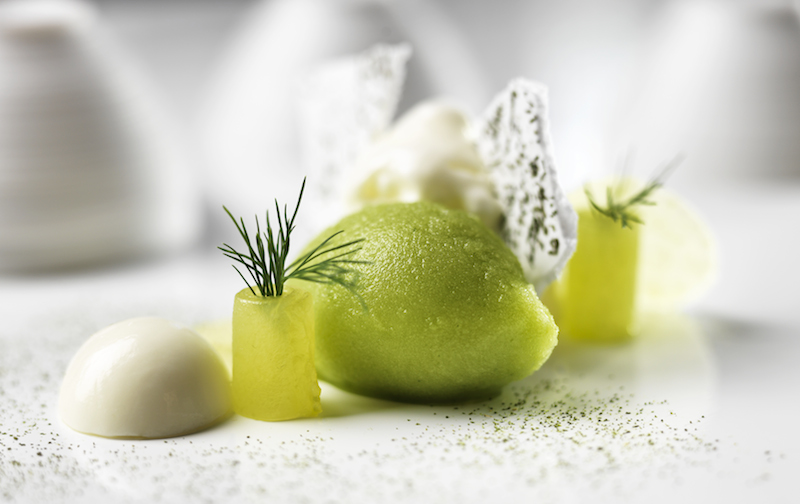 As the Michelin precept guarantees, little extra nibbles will pop up throughout the long meal to keep your mouth entertained. A dry branch hands you bite-sized crispy chicken skin crackers with corn cream and dried egg yolk, a foie gras formed as a coin is laid on the overhead crystal chandelier reflecting glass artwork, and then a hands-on finishing act sparks up the passivity of just eating and conversing. The presentation entertains. With assorted scissors trim as much watercress as you like, let it nest on the warm ash bread served with a pinch of Maldon salt and a meringue of each – a lightly whipped smoked and buttermilk butters. This delectable gardening will keep you busy until the first course arrives. Since the chef’s favourite ingredients include “citrus fruits, dill and oysters” you taste them often from his menus. 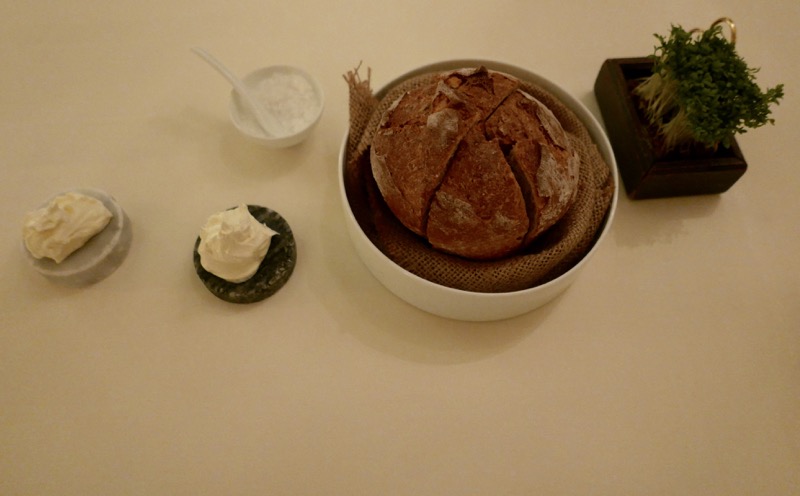 The guardians of quality though are seasonal ingredients, carefully sourced and transformed into conceptiually similar plates. Arriving to the Ecco’s kitchen mostly from the coasts and mountains of Europe, the natural produce shines in his two flexible tasting menus. Fliegauf asserts that “in both menus the dishes are coordinated so that they match and harmonize“. Nevertheless, the chef allows for you to be the arbiter of taste so you can mix the dishes from both menus.
The Fine menu offers three, four or five choices. The two of us started with the light Breton edible crab, citrus fruit and avocado cream. A superb display of the love for citruses married in a perfect partnership of raw seafood and a rich fruit. 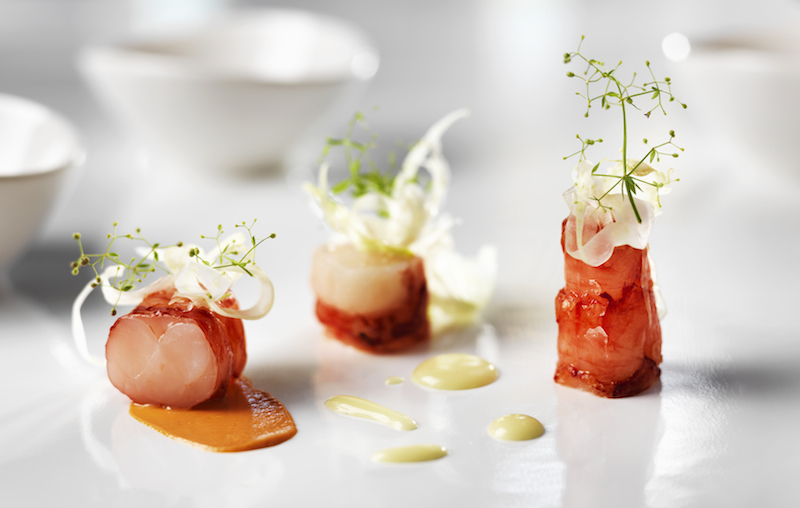 The Delux menu expands to six, seven or eight courses, where their portions decrease with more courses. Another personal favourite of the chef, the gillardeau oyster, was originally paired with king mackerel and horseradish in a surprisingly not so fishy result. The optional (add 30 CHF) Prunier Paris caviar on side adds salty and contrasting texture, so is worth paying for. Each time I go for the creation with Norway lobster, recently served with the pumpkin raviolo and sea buckthorn. Spotless, cooked just right, tender and juicy, while enriched by the choice of accompaniments. The previous year the lobster was prepared with carrots and seaweed cracker, different but superb. 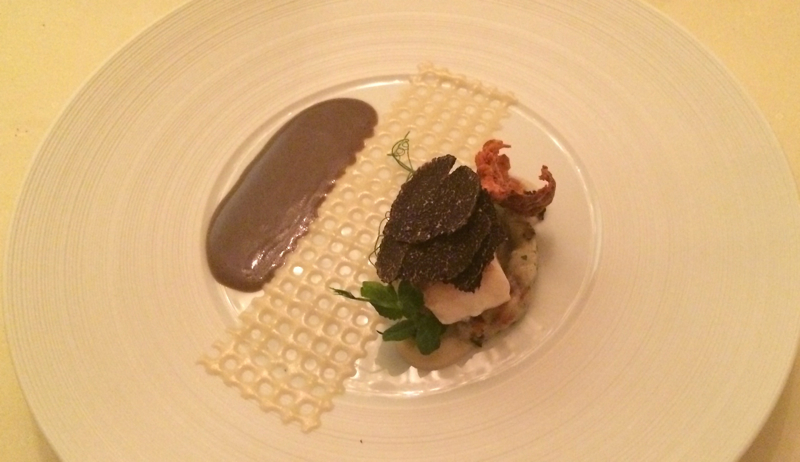 If the menu features the Brüggli salmon trout then go for it. The flaky, soft river fish with shavings of radish in a smoked fish velouté was my second favorite dish right after the lobster. The previous year my fish course of choice was the Atlantic Turbot with Perigold truffle and Jerusalem artichoke, also perfectly embracing the European heritage.
Meat naturally occupies its spot in the mountain menu, yet less than you would expect, which is incresingly supported not just but many top chefs but also the diners seeking balanced dining out. Last year I went for a course with deer and my husband enjoyed the veal Tafelspitz, while his choice of the Luma pork with brussels sprouts and black pudding on a recent occassion confirmed the chef’s talent even with the ingredents that my husband rarely appreciates (pork).
Although it is not printed on the menus, vegetarian requests are always accommodated. 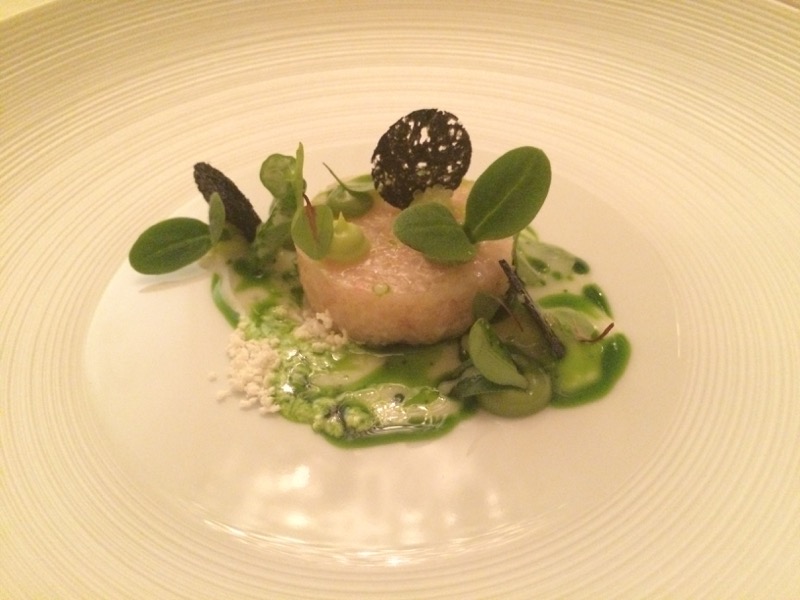 Before the desserts, try the selection from Swiss cheeses, usually including the Emmental as they are presented “a bit differently, showing a more modern way of a cheese plate“.
The sleek, delicate and modern form of cooking will not weigh on the fondue effect on your body, so put your trust into the multi-course tasting menus. The chef stands for a cuisine that is “light, accessible to anybody, aromatic and exiting when it comes to the combination of aromas.” The Fat Duck effect of his experience at this iconic British restaurant sparks from the surprise of some of the dishes, yet rustic meets haute cuisine in his culinary philosophy. His cuisine also incorporated slow food by all means – his veal stock takes 60 hours of preparation! 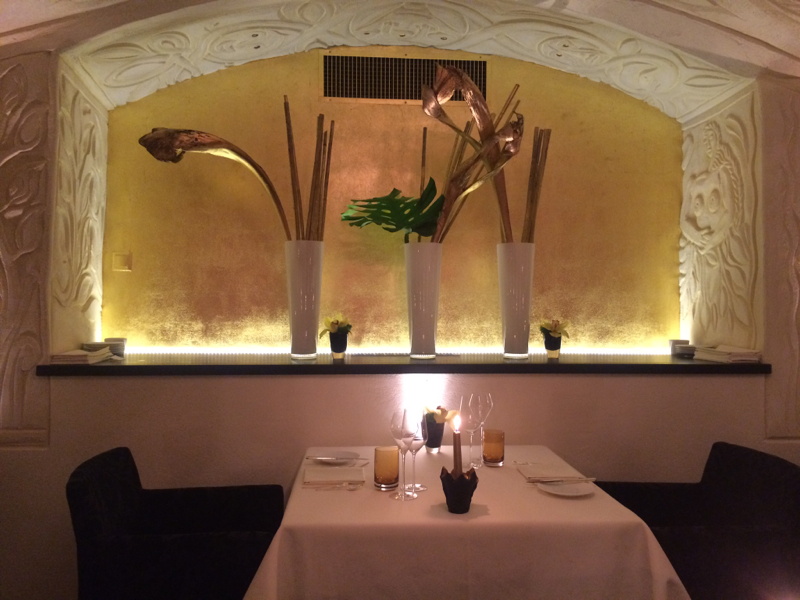 The organic aesthetic quality of the chef’s plating style and the tranquil setting of the restaurant underground in a golden cave reset your emotional state. Like in a spiritual moment, dining at Ecco on snow transports you into a fairy land, far from mundane concerns, but rich in awing experiences. The gold leaf on the walls was inherited from the previous restaurant, but it is so unique that the Giardino hotel, where Ecco is located decided to keep it.
The mother of all the Eccos in the Swiss Ascona recently gave birth to another child with the same genetic make-up and sourcing from the same producers. The Ecco Zurich opened in December 2015 at the Atlantis by Giardino hotel group. We are craving to dine at both when an opportunity to travel to there arises. The summer jazz festival in Ascona is surely a tempting invitation. 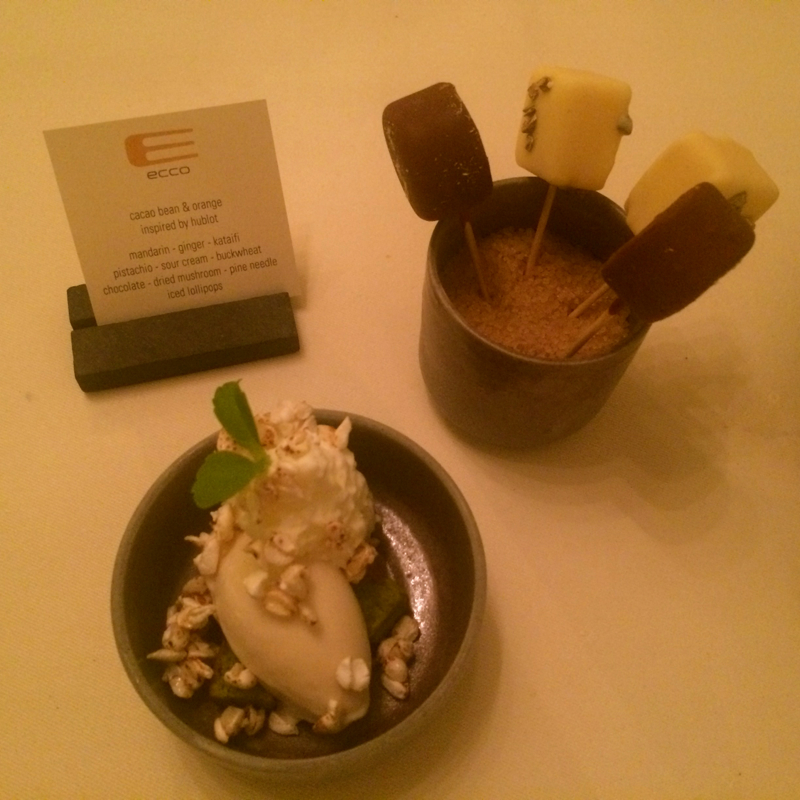 Ecco’s sommelier was one of those wine experts that persuade you to do something rather daring. Despite our past disappointments, we entrusted our wine palates into a pricy Swiss Pinot Noir. The Monolith 2012 by Obrecht was a turning point sparking our belief in the Swiss wine making excellency. Our love for Swiss Pinot was born with the first glass of this wine. The well-appointed wine list offers plenty of choices, yet each time we ordered the same bottle and vintage to be once again mesmerised by its shining brightness and savoury complexity. Like with the after movie credits that you rarely read, the finish was long lasting.
The chef confides: “First, we want to inspire ourselves and stay loyal to our own concept. I think that is way more important than trends or following trends“. The flare of his kitchen team and the quality of Fliegauf’s cooking confirm that he is on the right path.