Cha Cha No Ma literally means a dining room where tea is served. Hidden from the sights of the Tokyo’s manic shoppers in the narrow maze of shopping cul-de-sacs in Omotesando, the Tokyo’s most hip and trendy shopping district, the small and cosy tea room is a balancing escape from the fast-life in Tokyo. 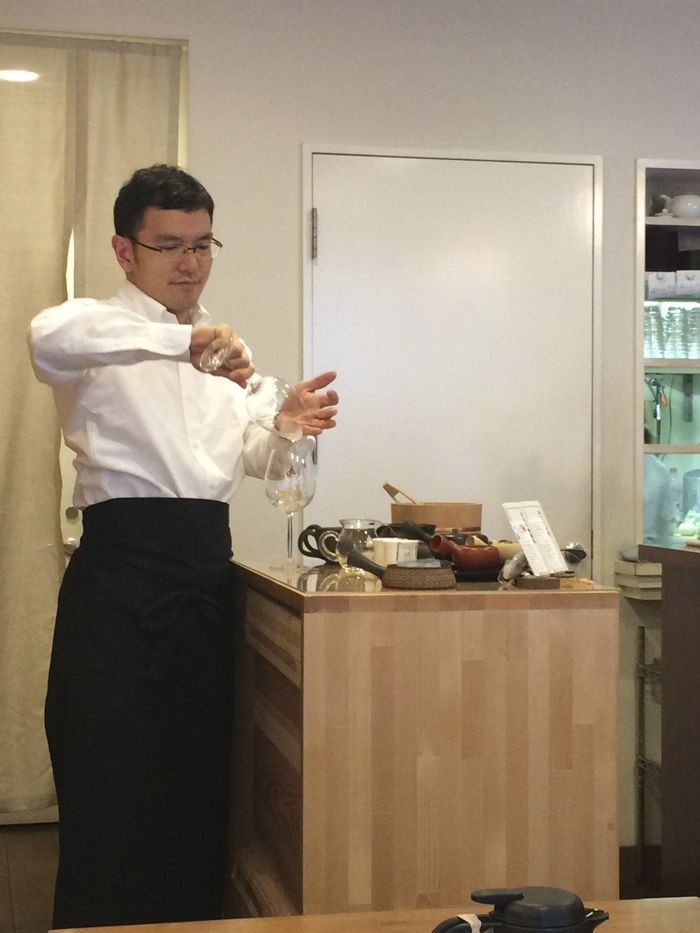 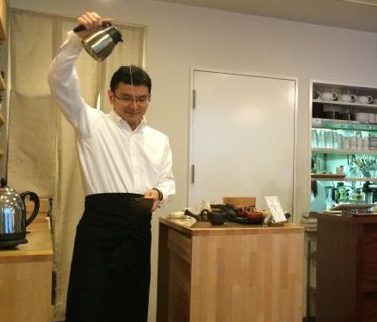 Yoshi Watada, Cha² No Ma founder and certified ‘Japanese Tea Instructor’ by the Green Tea Institute in Shizuoka, personally selects each year about 30 types of tea for his store, tea room and a casual diner in one. All of his tea is hand-picked mostly from Shizuoka, the largest tea growing prefecture in Japan. More, he provides you with little tasting cards for each tea, so you remeber which one you liked. 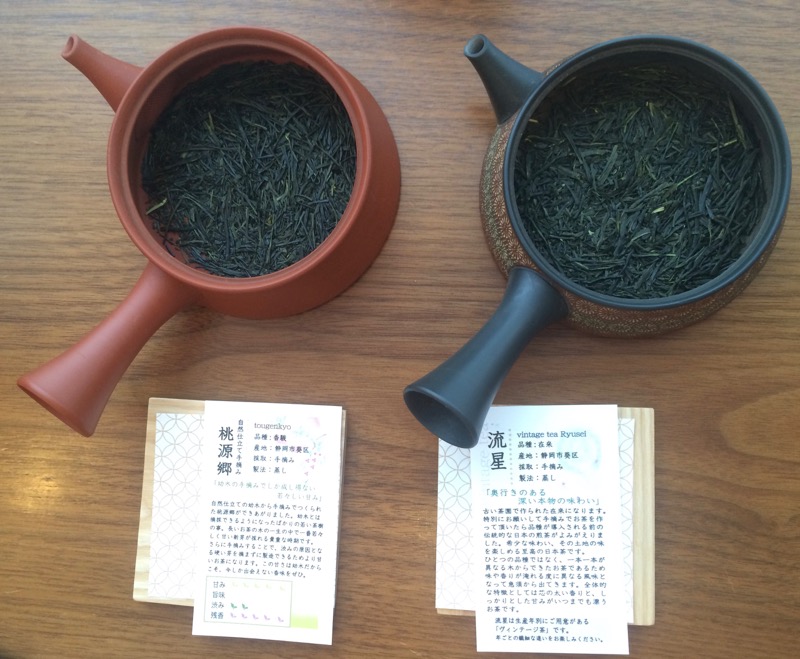 Mr Watada also authored a book on tea in 2009, an English translation of which is now in the works. While, he is aware of the long tradition of Japanese tea drinking, he adjusted the methods of preparation of the local green tea, sencha, his passion, in particular. Adjusting it to the modern time, he employs cold dripping through ice cubes, adding ice into brewed warm tea, serving it with sparkling water or steeped tea leafs on ice cubes, all alongside the traditional hot water brewing (80ºC max for green tea). You an witness his complex tea ‘ceremonies’ at Cha² No Ma or if you read Japanese, get his book. As I tasted a number of different teas in his suggested preparations as well as the usual way, I can conclude, that I was bemused how differently the same tea could taste! Its sweetness, level of bitterness as well as body (mouthful) can be highlighted or suppressed depending on which preparation is selected. The brewing temperature, as well as the length of steeping the tea leafs, affect the flavour tremendously. You can spoil your pot of tea so easily, so be careful!

The Japanese tea culture: the past meets modern fast times

He explained to me how different is the contemporary Japanese tea culture from the traditional. The oldest tea style, popularized by the Japan’s father of tea ceremony Sen Ryukyu, was the powdered matcha whisked into a fluffy beverage seved in a wide bowl. As tea became commercialised, it is now drunk in an informal style anywhere from Starbucks to a specialist matcha ‘fast-drinks’ chains such as Nana Tea in Tokyo. The formal tea ceremony is mostly performed for tourists. Still, the most popular daily tea in Japan is bancha, or tea that is drunk with a meal.
The tea barrista prefers sencha, a new style of steamed Japanese tea which can differ so widely that it captured his curiosity. At his cafe, he serves pre-selected varieties of a single farm and type every vintage. Although he tends to keep the same picks every year, tea like wine differs from a vintage to vintage, and this fascinates him. He even sells some vintage sencha such as the that I purchased recently.

Ryusei is a Japanese native wild tea tree grown and hand-picked by the farmer Mr. Tsukiji. Since it is a wild tea, the size of the leafs and the flavour of the brew can differ from a batch to batch. Unlike most of the steamed Japanese green teas, it benefits from multiple brewing as with each pouring of hot water a new fragrance reveals itself. Try it warmly brewed, in an ice-drip-preparation or with ice cubes added into the glass. The 2012 vintage of a “deep genuine taste” was very powerful in all dimensions, a strong bitterness, big body and also pronounced sweetness that shows best if you prepare the tea through the ice-drip method. After a coupple of brews I realised that it should be steeped for a very short time in the warm pot, 30s max.! 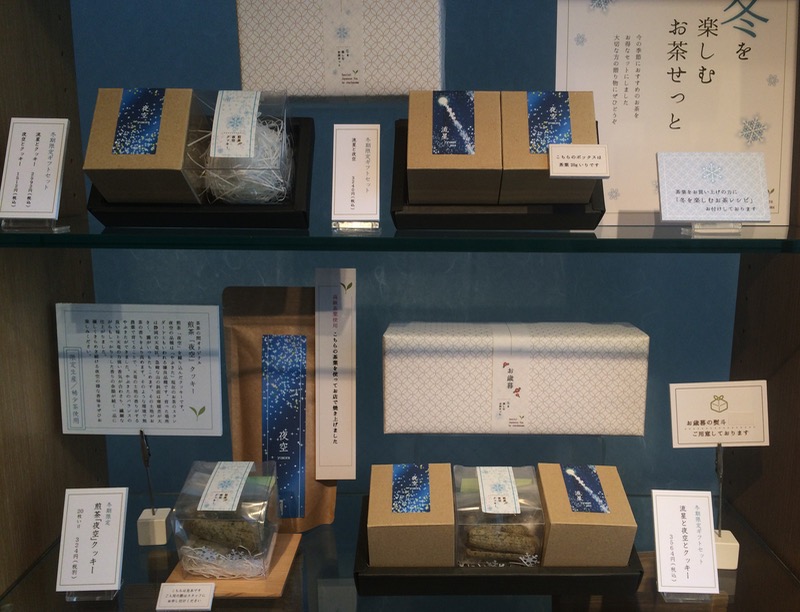 The bestseller is Aoi Tori of the Sofu kind. This hard-stem young tea was hand-picked and steamed, and because of it not being as bitter and having a smooth flavour, it became the friendliest of all senchas at Cha² No Ma. Also grown by Mr. Tsukiji in Shizuoka, it has a “fragrance taking you up in the clear blue sky“.
I like Sakuya, the “noble atmosphere” evoking steamed tea of the Koshun type. It was grown without the use pesticides, is balanced, floral and very clear, so it drinks smoothly. Like the Ryusei, it can be appreciated in multiple brews as the flavour changes with each pouring of fresh water.
If you like naturally more sweet green tea, than try Tougenkyo also of the Koshun type, but with more pronounced peach scents, particilarly when served cold.
The Ujigyokuro is generally the highest grade of green tea in Japan. The tea bushes are shaded from the sun before harvesting so the chlorophyll levels are increased yielding brigter green leaves with a more sweet, rather than bitter taste. The first harvest late in April and May produces the highest quality of this tea. The vigour of the spring shows in the bright and energising flavour. Mr Watada likes to serve it in all his four ways. Unlike for sencha, the warm pot should be steeped in a maximum temperature of 60ºC. 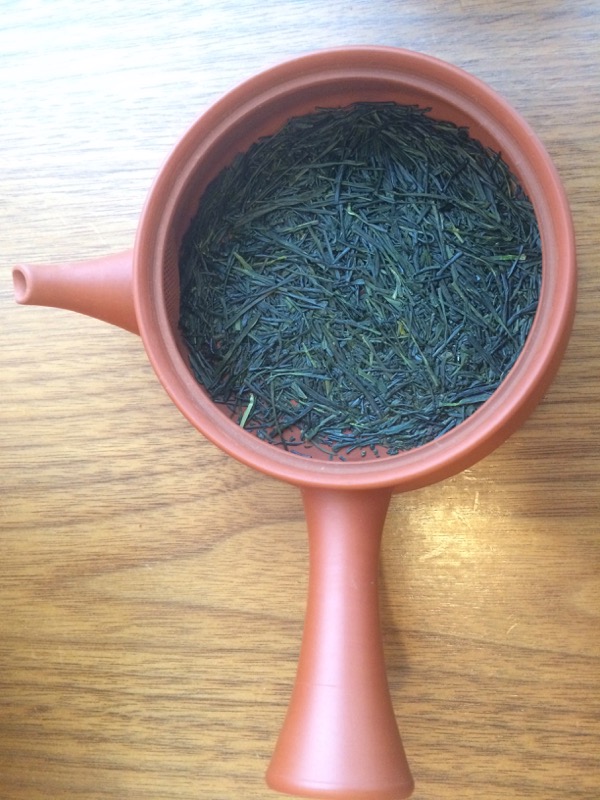 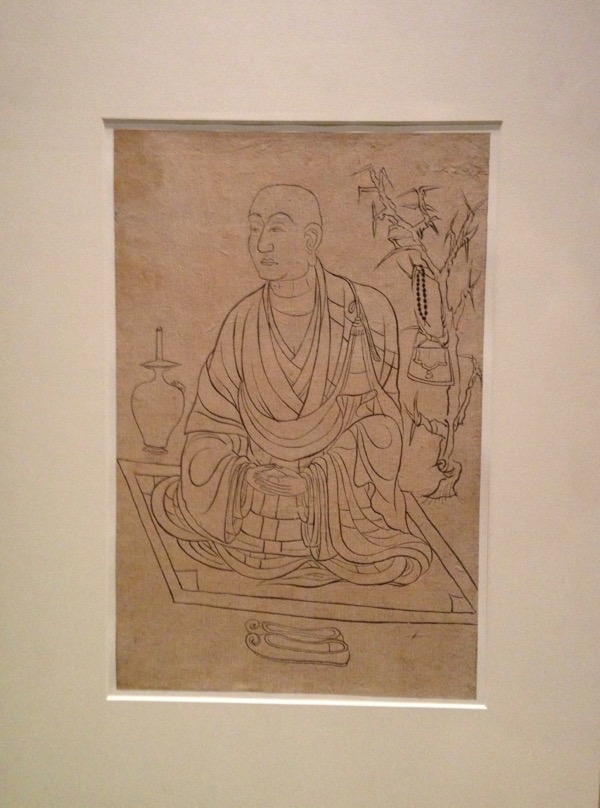 At his cafe cum tea house, he will happily explain, in his slow yet adorable English, anything about Japanese tea, shows you the various preparations and highlights the impact on the taste of each tea. He is not as keen on having certified organic teas. After talking with many local producers, for the quality and taste to be assured annually a little bit of “medicine” [aka pesticides] is generally used in Japan. He also added though, that the good farmers do not add any chemicals if the weather conditions of a certain year are favourable.
The food for lunch is always fresh and healthy. The bento-style plates in the daily set-lunch menu with three choices from the main plate, one of them always vegetarian, one usually a fish and the third a meat course. All served with rice, a soup, some tsukemono (pickles), a mildly sweet dessert and a barley porridge. A typical cup of bancha and a glass of iced green tea are included in the price. We honored the Japanese tea pioneers, the Buddhist monks, who brought tea from China to Japan in about 800 AD as we usually choose the vegetarian meal. A bowl of sesonal steamed mushrooms and veggies is usually served in this veggie bento. 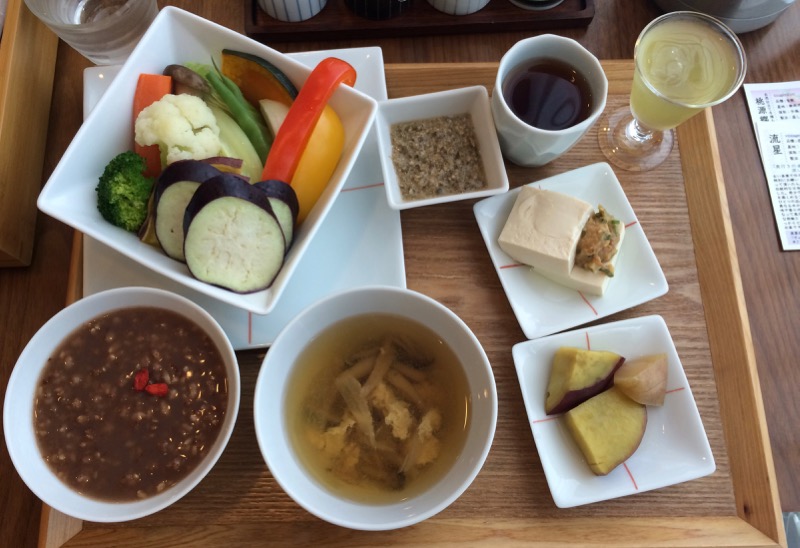 As is a Japanese custom, sweets are also available to accompany your pot of tea. We had matcha mochi, the sticky morsels made of gooey flour, water and covered in powdered green tea. They make for a nice pairing with green tea.
When looking for the discreet tea room, you may get lost in translation as it often happens in Japan. My advice is to look at the Chanel and Dior boutiques alongside the main shopping Avenue in Omotesando, then turn into the side alley between them. Lunchtime is very popular with locals coming from the offices in the area, so you better book. If you want to enjoy just tea with some sweets, then better come outside the lunch hours so you can chat about the tea with the expert.
5-13-14 Jingumae, Shibuya-ku, Tokyo 150-0001
Mon-Sun: 11am-7pm
+81 3 5468 8846 chachanoma.com