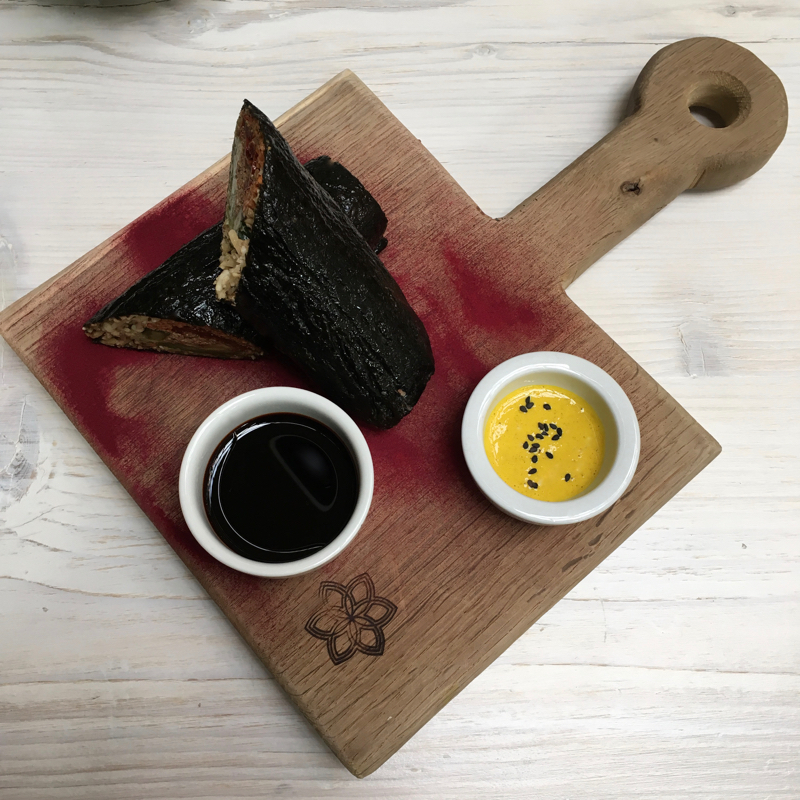 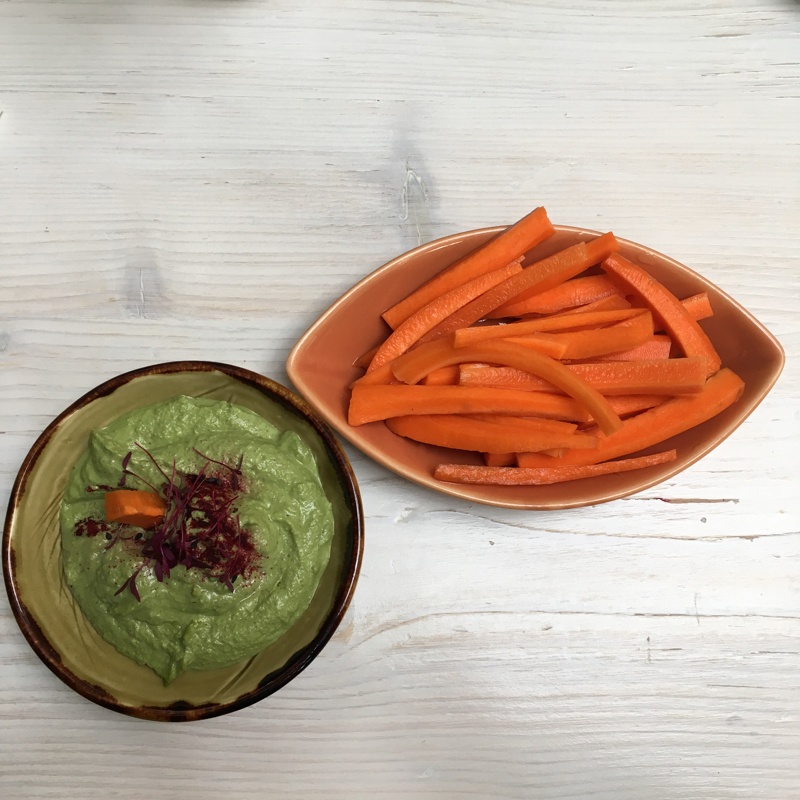 The plant-based cafeteria was ideologically nourished by a personal healing experience through vegetable juicing after a serious car accident, that left then a teenage Tanya unable to consume any solid food. “I healed instinctively on juices. Mint tea with Manuka honey was the first think I could have without throwing up at the hospital after the car accident seriously damaged my inner organs.” Vegetable juices followed and, to the kiwi doctors awes, she recovered. Tanya’s Raw Cafe in Chelsea, therefore serves cold-pressed juice blends, potent elixirs as well as pour-over coffee, one of the rare hot beverages in the house. Of a Russian origin, she grew up with her family in New Zealand and only in her twenties moved to the UK, where she curated her raw diet for years before opening with a partner Tanya’s Raw.
The passion translates in the kitchen as slow food made from scratch from organic seeds, nuts, spices, natural sweeteners, vegetables, and fruits. Having a breakfast just after the highly successful launch about two years ago, and a couple of lunches in various seasons, I can confidently nod to Tanya’s consistent appeal and development of the food, but wary of not so seasonal and mostly not locally grown menu challenging to source on the British Isles.
Having interviewed the co-founder Tanya Alekseeva, in the first days after opening, then a fresh 30 years old woman just before getting married, adopting a new surname (Maher) and pregnancy, gave me a well-rounded perspective of where Tanya’s Raw is heading. Serving energetically sufficient and nutritionally balanced raw foods in London has proven to be “the most difficult thing about serving raw food in London”, confessed the brain behind the recipes, nutritionist, and certified health coach. Locally sourced ingredients are hardly realistic. Despite having about 20 suppliers, for example  finding an avocado, the popular “creamer” in raw recipes, during all seasons is not pliable so creativity thrives.

Experience raw from breakfast, lunch through desserts and cocktail hour

I am not a fan of the almost flavorless tiger nut “milk” served with the organic pour over coffee, in itself superb. From the morning warmers, the date sweetened and almond protein enriched My Hug in a Mug of immunity boosting Medicinal Mushroom Latte as well as the inflammation reducing Golden Turmeric Latte won my taste buds over. From the juices, if you are concerned about the taste, not just the potential “health benefits”, then My Vision (carrot, orange, turmeric, mango and juices) is delectable. For a late breakfast (they open at 10am on weekdays, 11am weekends) or brunch, I quite liked the Aussie-inspired savory Avo un-toast, which is a dehydrated onion bread based on sunflower seeds, raisins and the odorant bulbs, topped by a smashed avocado and chilli flakes, is one option, but the date sweet Grawnola based on sprouted buckwheat and served with coconut yogurt is the most popular. 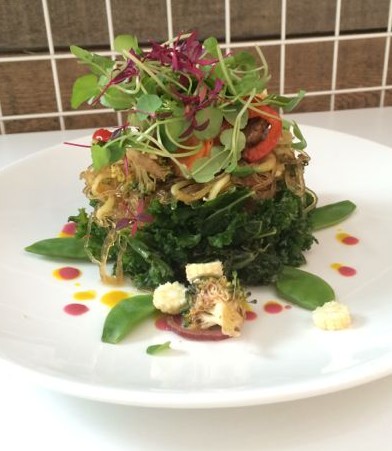 My menu favorites include the creamy side of the pesto-hued Herbed Almond and Cashew Ricotta dip with the superb, sweet carrot sticks. The founder’s favorite plate are the Thai Curry Kelp Noodles, that have been on the menu from the start, and I liked them too for their light spicy kick, plenty of fragrant sprouts and seasonal vegetables versatility. As most of Tanya’s recipes, traveling has been a well of inspiration for the mother of a nine-month baby girl named beautifully – Lake. The author of The Uncook Book. From her travel-inspired Adventure Salad bowls, that I tried I loved the pickle-rich Europa Adventures including the marvelous spiced-up Korean carrots (also available as a small side dish) and smoked pepper hummus. The deep white plate was decorated with powdered matcha and by the US chef, Matthew Kenney inspired flower, that I also adore at the Milan’s best raw restaurant Mantra. Tanya confessed that her admiration for Kenney sparked because “he produces art on the plate”. The almond and cashew ricotta, sundried tomato paste and walnut meat stuffed courgette Lasagna are superb, while the Nori wrap was perhaps too mushroomy fermented tasting, yet both remind me of Kenney’s plates at his now closed M.A.K.E in Santa Monica. The raw burger that was popular after the opening yet has thus far vanished from the menu.

Raw foods: good for everyone and any ingredient?

In order to grasp the raw “uncooking”, the definition by the European Food Information Council [EUFIC] of what is cooking helps: “Cooking is the process of producing safe and edible food by preparing and combining ingredients, and (in most cases) applying heat. Cooking is a means of processing food, without which many foods would be unfit for human consumption.” Often, the reason behind why most contemporary raw (heated bellow 47oC) food public eateries stick to a plant-based diet, is safety. The EUFIC warns; “at temperatures over 70oC most bacteria are killed and below 5oC most food poisoning bacteria can only multiply slowly or not at all”. Raw food is served at room temperature and prepared using maximum 46ºC heat so the bacteria can possibly thrive in the unpasteurized, cold-pressed, raw juices. They must be kept in refrigerator from the moment they were made. Still, either Salmonella and Listeria monocytogenes can thrive in unwashed vegetables as in animal produce, therefore it is important to store and clean the veggies thoroughly. Some foods are rendered edible by the physical and chemical transformation during cooking, and some vegetables are even poisonous when eaten raw! Therefore, you will not find potatoes on the raw menus. Ideally, inform yourself of what ingredients are suitable for consumption in their raw form. This is also why well-established and for safety scanned raw cafes, juiceries and restaurants like Tanya’s Raw are very useful. 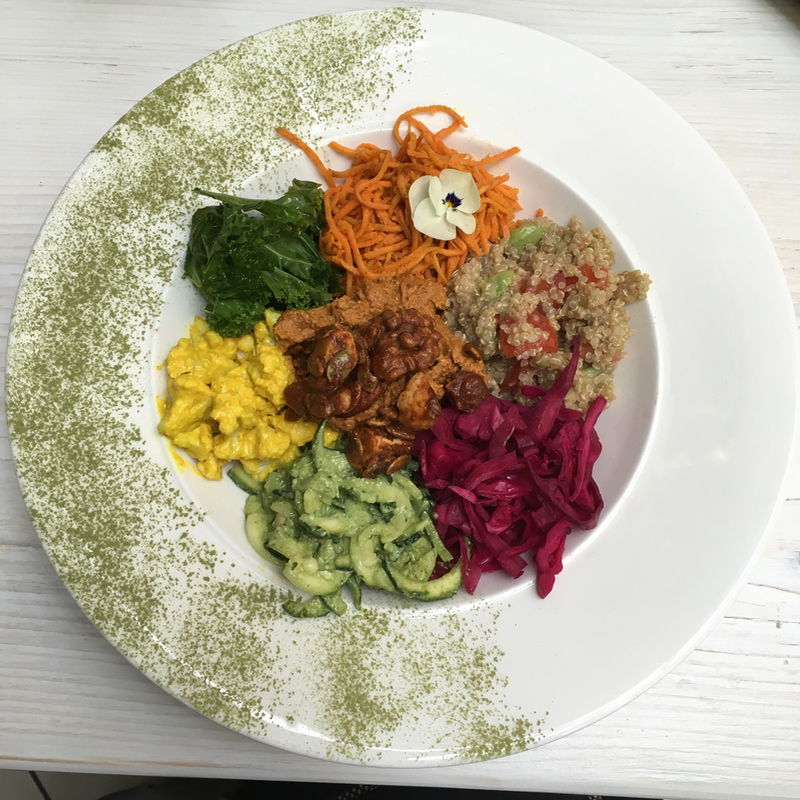 Cooking is a very complex process and if you are concerned about nutrition and digestion then you must consider each ingredient on an individual meter. For example, certain carcinogenic compounds (nitrosamines) are formed during specific methods of cooking such as grilling, smoking and other high heat processing. Sulfurous compounds add flavor in baked biscuits, bread or in cooked meat, but they can upset sulfate sensitive individuals. The EUFIC further warns that “water-soluble vitamins, in particular, are heavily affected by cooking processes that involve immersing food in water for long periods of time, and fat-soluble vitamins tend to be lost during cooking processes where foods are cooked in fat.” The raw foodists are right that enzymes in food are killed by heat, and our body has to work extra hard to produce its own enzymes to digest and absorb the nutrients from the food. Yet, it is not black or white.
On the other spectrum of the cooked versus raw contest is the fact that “heating itself does not affect mineral levels but they are usually leached if cooked in boiling water” (EUFIC). Further, “many of the nutrients contained in foods are not readily accessible prior to cooking and thus, cannot be easily digested by the body.” Take onion, that I have troubles eating raw, but when you serve it to me cooked, I have no difficulties digesting it comfortably. Yes, you kill some of the heat sensitive Vitamin C, but the balancing consideration is all about finding what suits you. One person is fine with raw veggies and nuts, while another’s body has a hard time producing the necessary enzymes to break it down. “Cooking foods containing starch (e.g., cereals and vegetables) aids the action of amylase and the consequent digestibility of the carbohydrate component of the food.” Pregnant women, vulnerable babies and small children are warned against the potential harm of consuming raw food. But again phytochemicals and pigments such as chlorophyll in green vegetables are degraded during long cooking with a fat. Carotenoids in direct contact with air undergo oxidation, but using lid or pressure cooker can prevent this. Water-soluble anthocyanins and anthoxanthins should not be soaked or boiled for a long time. Stir-frying is the most pigment saving method to flavonoids…it is complex, I said.

Tanya’s Raw Cafes proudly use only natural, mostly low GI sweeteners such as xylitol, stevia, but also dates (although unprocessed they are too high in fructose and glucose, with over 67% carbs beware), and raw agave. The cashew creamy Blueberry Cheesecake tantalises the taste buds of many female but also male customers. By indulging in it, your body will get a super antioxidant boost since one cake contains 4 and a half cups of blueberries! The Key lime pie and Carrot Cake are also being rotated on the daily dessert offer. In the real raw philosophy, desserts are consumed before a meal to get the digestive juices rolling.
Some of the cocktails and shooters contain responsibly sourced Manuka honey. Although limited to a small number of drinks, honey and bee pollen are the only two non-vegan ingredients used. Ethical sourcing is native to her business. The raw cocoa and cocoa butter are fair trade. Beware, though as Tanya warns that “your cravings might be telling you something different than omg! I need some chocolate now! It may be that your body is asking for magnesium after a stressful event or during women’s period.” Our nerves need magnesium. The body is smart. It knows what it needs. You better give it a raw dark chocolate that is more nutritious than the normal, with white sugar packed chocolate. 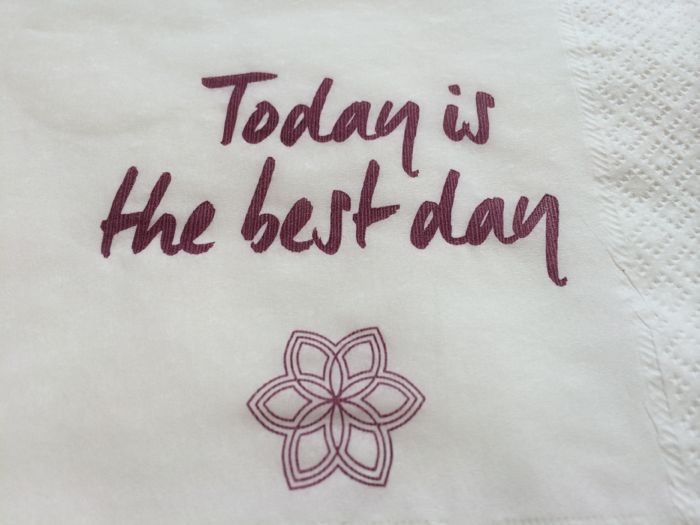 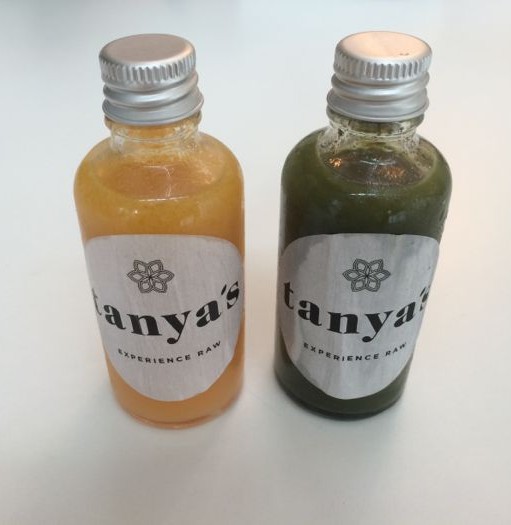 Tanya revealed something, that stroke me as a considerably shocking and controversial claim: “When you cook food you are addicted to sugar, think about an apple, what happens when it is baked? It turns sweeter because all the carbohydrates in the fruit have turned into sugar under the high heat. Raw foods are less sugary in their nature.” Indeed, cellulose, pectins, and starches in the apple are broken under heat into monosaccharides such as glucose.
This sweetening under heat depends on the raw material though. My chemistry background directed me to a well-trusted, scientifically sound research. I found that some cooking methods actually reduce the sugar taste of its carbohydrates and turn them into more bitter compounds. For example during caramelization when the most dark to black caramel are formed. [source: EUFIC] 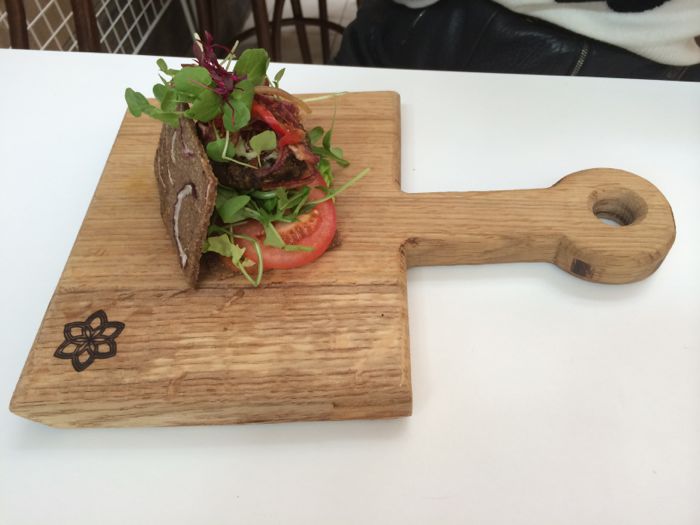 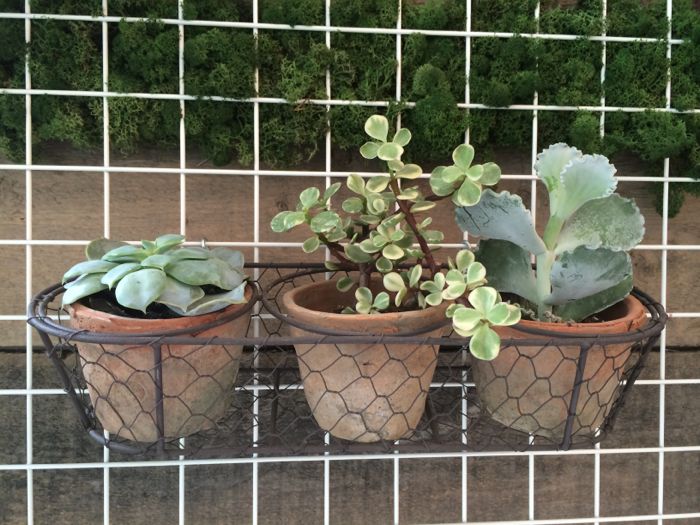 Beyond cleansing, organic beer and wine: shaking up innovative and nutritious cocktails

Sipping on a cocktail as a vitamin and mineral boost? A purportedly rejuvenating supplement meets indulgence at Tanya’s Raw Cafe. Although the limited juice, raw soups and raw snacks incorporating cleansing programs are a significant part of Tanya’s raw business, there are many other delectables and organic beverages to rejuvenate through. Organic European wines, as well as gluten-free Czech lager, are imported, but it is the mixology behind the counter that steals the show. Superfoods like matcha, cacao and acai are blended with organic gin, tequila or vodka or rum. These superfood organic cocktails are Tanya’s raw signature creations.
You can now savor Tanya’s Raw at two locations: Tanya’s Chelsea, the original raw food restaurant and superfood cocktail bar; and Tanya’s Parson’s Green, a much smaller cold-press juice bar and a coffee shop. Recent pop-up at Selfridges for over a month this year promises more to come to London. Tanya hints: “Raw foodies are not our target market. Most raw food eaters prepare their food at home and rarely dine out. Myself, I try raw restaurants, eat there once or twice.” It is about balance, and having more health and nutrition focused restaurants at your convenience helps  to create a better nourished life when you are out and about.
Tanya proves that her positive persona is not just a superficial posterity, but a deep belief, as she instinctively concluded our conversation: “I don’t believe that everybody is suited to eat 100%raw food, it’s important to include it in our diet but you should listen to your body for what it wants.” I cannot more agree.
35 Ixworth Pl, London SW3 3QX,
+44 20 7225 7538
Tue-Sat: 11am -10pm; Sun: 11am-4pm; Mon: closed