"No wonder this thin stuffed Franco-Vietnamese delicacy was such a perfection. OMG, the best Vietnamese crêpe I have ever had! Served only at lunch, the Vegetarian Vietnamese Crêpe was mastered with honours."

Enter the waterfront of the San Francisco’s iconic Ferry Building and open The Slanted Door, literally. As the woks sizzle in the background, the trendy, yet casual modern Vietnamese eatery hums with a dense foodie chatter. Originally set on the now hip-centric Valencia Street, since 1995 The Slanted Door has been stirring the California palates on its hot, but not spicy Asian fare. Now expanding its Mission district success, and ready to go, lined on the counter fronting the semi-open kitchen, the freshly prepared plates do not hang out for long, the restaurant is always full. Young couples, American-Asian girlfriends on a night out, entire families and even merry groups of elderly diners, all mingle in the large, U-shaped room. 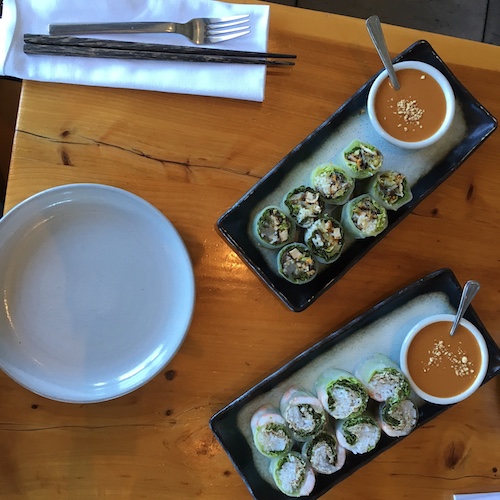 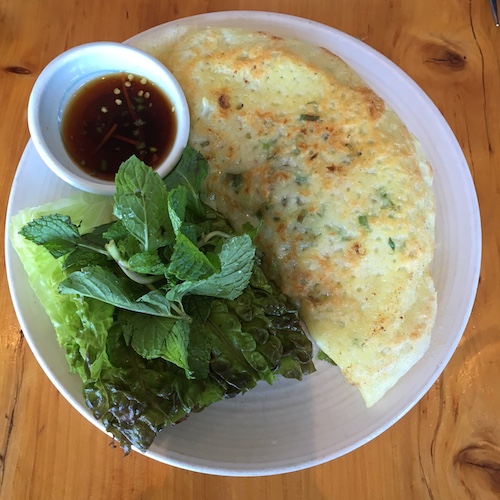 Sustainability is at the core of the business of its founder and the Executive Chef, Charles Phan, whose inspiration came from the Bay Area pioneer of ultra-local fare – Chez Panisse. Locally sourced, and often organic ingredients are being applied to the chef’s contemporary Vietnamese culinary vision. With the seasonal plant produce, wholesome carbs like brown rice, handmade yuba (tofu skin), glass (cellophane) and rice noodles, chef Phan proudly claims to be also offering “ecologically and humanely raised meats, game and poultry found at farms around the San Francisco Bay Area”. Dairy in the deserts and coffee arrives from the nearby family-owned and organic Straus Family Creamery.

The chef’s journey into the cooking world was rather unusual. Studying architecture, moving to garment design in a family business, and being swirled by the Silicon Valley behemoth software business did not stop Charles Phan to turn back to his Vietnamese roots. Opening a small crêperie was just a start to get the San Franciscans’ saliva talking. And, business is growing as The Slanted Door reaches a new exciting destination this fall (more later).
Most plates are designed to be shared, the eastern way, so bring friends or come really hungry to eat it all. Perhaps, just next time I wouldn’t want to share that crisp and with steaming veggie-stuffed, OMG the best Vietnamese crêpe I have ever had! This thin stuffed this Franco-Vietnamese delicacy was such a perfection, that he mastered with honours. Served only at lunch, the Vegetarian Vietnamese Crêpe stuffed with tofu, cabbage and tree ear mushrooms, was my absolute favourite from about the ten dishes (between two!) we grazed through. A side of crunchy iceberg lettuce and a bundle of fresh mint balanced the delicate, but inherently oily nature of the ultra-thin pancake. Pour or dip in the soy and chilli side sauce …crack, chew and savour! A meat version filled with gulf shrimp, pork shoulder, bean sprout and yellow onions is also popular.
Integral with its sustainable mindset, vegetarian plates such as the superb Green Papaya Salad, encourage a balanced grazing. More white than green hued the raw papaya was tossed with shaved pickled carrots and slivers of raw ray ram, known as vietnamese coriander, and sprinkled with fried shallots and cracked roasted cashews. Mixed in was an egg-coated fried tofu for a wholesome and deliciously refreshing plate. The Vegetarian Spring Roll appeals to more mellow palates and could be boring unless you dip it into the generously dense peanut sauce on the side. Tofu, white rice, hairy spikes of glass noodles, mushrooms and lettuces though called for a different accompaniment than the nutty dip. Perhaps a refreshing sweet and sour cilantro vinaigrette would make a better combo. 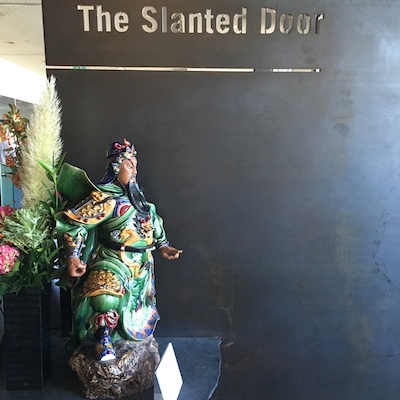 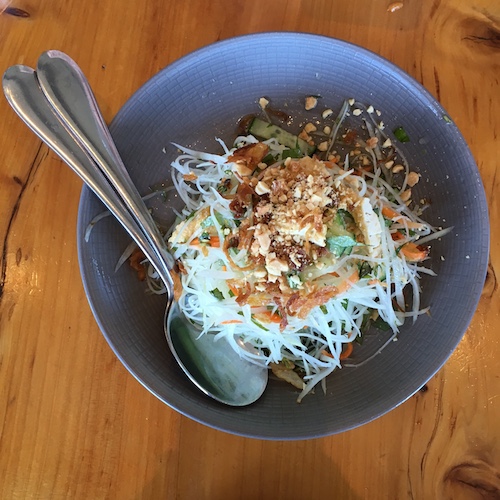 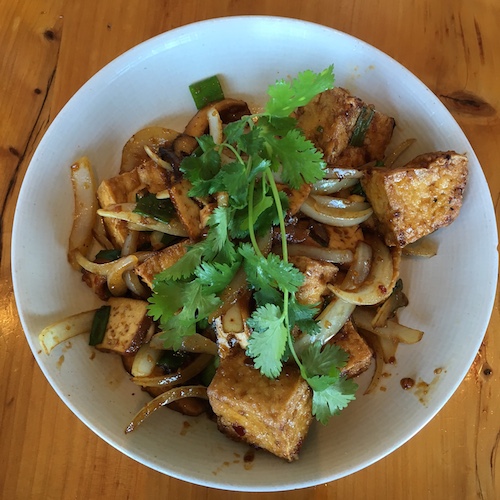 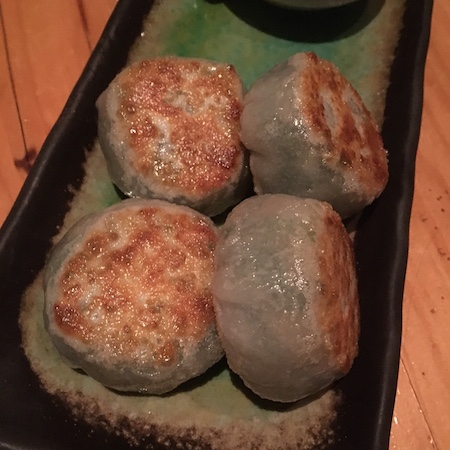 0
The vegetables are sourced from Full Belly Farm, Catalan Farm, Dirty Girl farm, All Star Organics farm, and other local purveyors of delicious goodness supply their diverse plant produce, and in the Alice Waters contagion their names are always included in the menu. One of them being the Star Route Farms, the oldest continuously certified organic grower in California. The side of crisp pan-seared Joyful farm baby bok choy with baby shiitake mushrooms is a clean accompaniment to any of the tofu main courses such as the stir fried Hodo soy beanery organic tofu. The organic seal assured that the soy came from a non-GMO source, chopped in cubes and with slices of smoked pressed tofu, lemongrass, mushrooms, scallions and succulent yellow onions in sweet roasted chilli sauce. Topped with the anti-inflammatory dose of cilantro proved that a healthful meal at The Slanted Door is possible. NO sauce here comes from the bottle, except for the non-GMO soy staple. Everything else is made from scratch, no msg or artificial additives or colourings. Even the bacon is house-made.
Going for meat, we tried two animal plates, but were rather unimpressed. The Emmer & Co.® heritage chicken staged in the Claypot or Stir Fry is always organic, pastured and rich tasting, In our diner order, the Organic Chicken Stir Fry was the most disappointing dish. Next to the high ladder of appetisers that we enjoyed before, the blend was just too much. With the slightly overcooked chicken were soy-marinated cashews, fresh gingko nuts, walnuts, sweet raisins and Chinese dates. A handful of cilantro with its stems covers most of the mains, but did not add moisture to the dry meat. A side of Massa organics’ brown rice will supplement your meal with more fibre, minerals and vitamins.
Pork is a Vietnamese staple and the chef proudly serves it in a number of diverse plates, from the rolls through nourishing soups and the succulent Grilled Prather Ranch 14 oz. Pork Chop. We tried the Pork Spring Roll but since we both do not like the fragrance of pork, we were not able to appreciate this typical Vietnamese snack.

Picking seafood to maintain diversity in the Pacific ocean

The chef works very well with local seafood. Wild Gulf shrimps and Monterrey squids as well as sustainable fish like catfish. With our aperitif, the very American-sized wild uni from Mendocino nesting in its raw nakedness on avocado and cucumber was slurped in its entirety from ceramic spoon. A decorative touch of squid ink coloured tiny flying fish roe (tobiko) added flavour and valuable nutrients to this delicate uni. Contrasting with its ultra-rich Southern sister from Santa Barbara, this was a revelation of how a little distance in the ocean can create a very different flavour of a sea urchin. The golden baked Gau choy gow or six wild gulf shrimp & green garlic chive dumplings dipped in a savoury soy sauce this made for a perfect sharing experience. Hmm, vibrated from one side of the table to the other. Bound to the chef’s mixed Chinese-Vietnamese origin are the Cellophane noodles also known as Chinese vermicelli, or glass noodles. They are made from starch and water. In Vietnamese cuisine, there are two varieties of these noodles: bún tàu or bún tào introduced by Chinese immigrants and made from mung bean starch; and Vietnamese, called miến or miến dong, are made from canna (dong riềng). In our order the transparent noodles were tossed with green onion, fresh chunks of Dungeness crab and sesame. Superb! 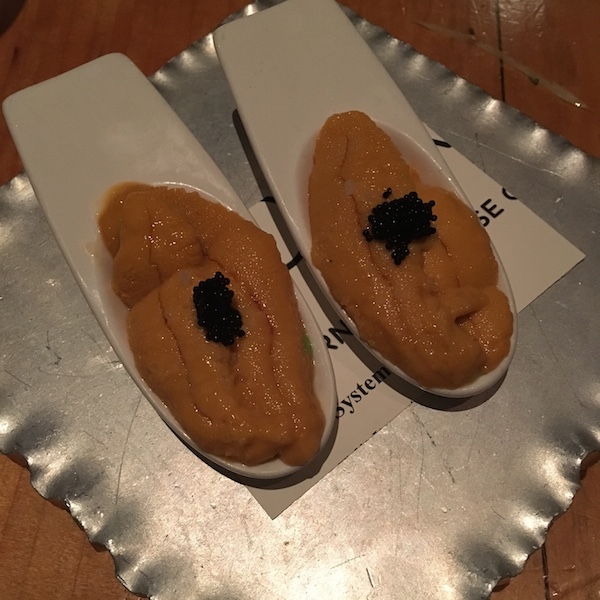 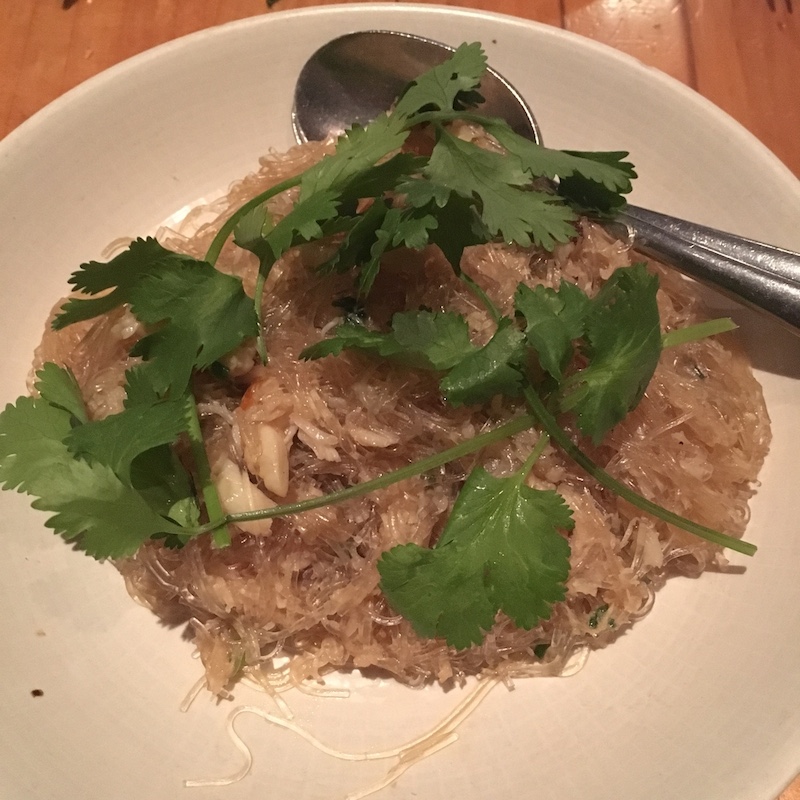 The carnivorous Cobia fish on the menu would happily feed on the luxurious crab meat as well, but luckily for the local ocean wildlife it was caught by California fishermen and grilled by the sustainable-minded Slated Door chefs. Cobia, also known as black salmon, is non-native to the California waters but has recently appeared to mess with the local biodiversity after a large numbers of this fast growing and hungry fish escaped from its farmed warm water environment in Equador. The summer waters around California tend to be warm so some of it migrated, and according to Milton Love, a research biologist with UC Santa Barbara’s Marine Science Institute (disclosing in an interview earlier this year) “this is the first time that Southern California waters have a large and voracious non-native species invade, these non-natives may have brought diseases with them that are not endemic to the Pacific Coast”. A worrying example of how risky is fish farming. With the rules more loose in some countries than others, threat do biodiversity is potentially rampant.

What to sip on with Vietnamese food

We enjoyed the savouries so were too full for the desserts and tea, but the Afternoon Tea offering assures a wide selection of sweet treats as well as a diverse tea selection from the fragrant jasmine to the earthy vintage black Pu-erh. 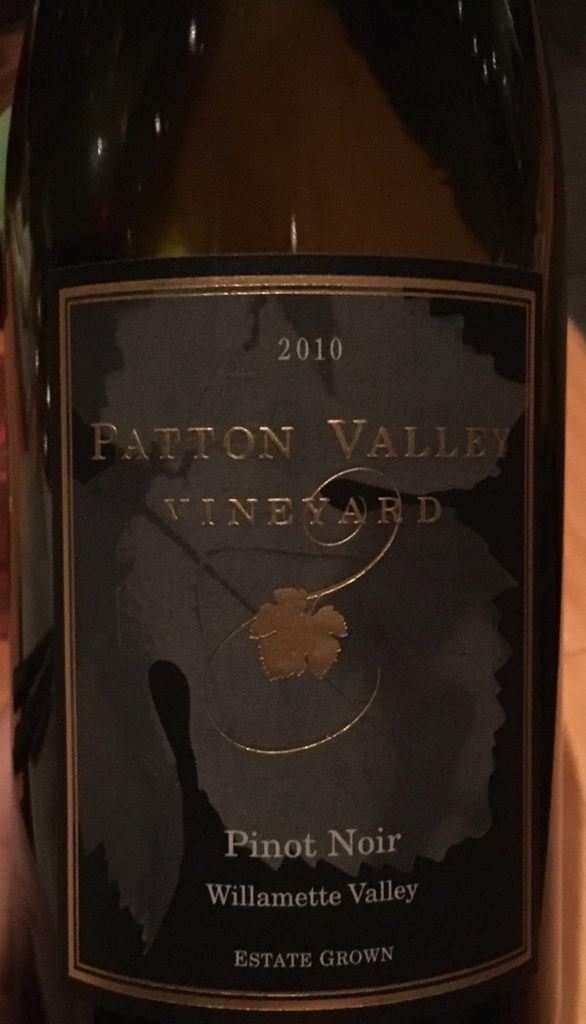 While cocktails rule the order tills during lunch time, and tea is sipped with the Afternoon Tea service, the wine list begins to be flipped over dinner. German Rieslings, orange wines, Champagne but also American finds. The wines on the list are organised by their character so the customer can select by momentous cravings. In the mood for “mineral driven, lighter bodied reds”? We were so during the buzzing dinner service we sipped on the Estate Grown Patton Valley Vineyard Pinot Noir 2010 from Willamette Valley in Oregon. Sustainable farming practiced on this vineyard reminds of Burgundy, where the world’s best Pinots are still being made. Bright, clean fruit but a savoury earthy character flattered our taste buds. By the glass or even the welcome by half-glass wines the well selected breadth covers the right picks for the fiery and often sweet Asian cuisine. Reds such as the bright Beaujolais or a funky blend from Jura surprise you next to the food friendly array of sherries, that drink well with Vietnamese food.
Angelenos can anticipate the James Beard award-winning outlet opening this fall. If the chef’s sustainable, locally sourced ethos translates well into this Southern California megapolis, it will fare well with the LA farmers market frequenting crowds. I wish, it was located more West and not in the Downtown’s newly opened City Market South, but this is good for the local workforce. I will rather stroll to the San Francisco convenient spot.
One Ferry Building #3, SF, CA 94111
+1 415 861 8032
Open daily LUNCH: Mon-Sat: 11:00AM—2:30PM & Sun: 11:30AM—3:00PM
AFTERNOON TEA: 2:30PM—4:30PM & DINNER: 5:30PM—10PM