Leaning forward to savour my first amouse-bouche, suddenly, I stopped and wondered... Uttering an extra word revealed an intriguing design feature - the round, umbrella-like ceiling structure above each table creates an echo. The other person won't hear it unless he bends forward as well. So everyone at the table must be in this private space where art and sound ushers the diners into their own little world.

There are only five tables at the three Michelin starred Le 1947 restaurant. Not many restaurants can afford seating just a pinch of diners, but we are at the luxurious Cheval Blanc hotel in Courchevel, the high-flying ski resort in the Savoyard Alps. The luxuriating tasting menu without any beverages was in winter 2017 priced at €395 per person, so the math can equate any potential loss. Attention to the guest is taken into a new level in the intimate setting as is a more direct experience with your food at Le 1947 restaurant. Beyond seeing the cooks in the kitchen, you will be shown a close-up of the preparation of the elaborate dishes that in some instances took days to prepare and you are about to eat. 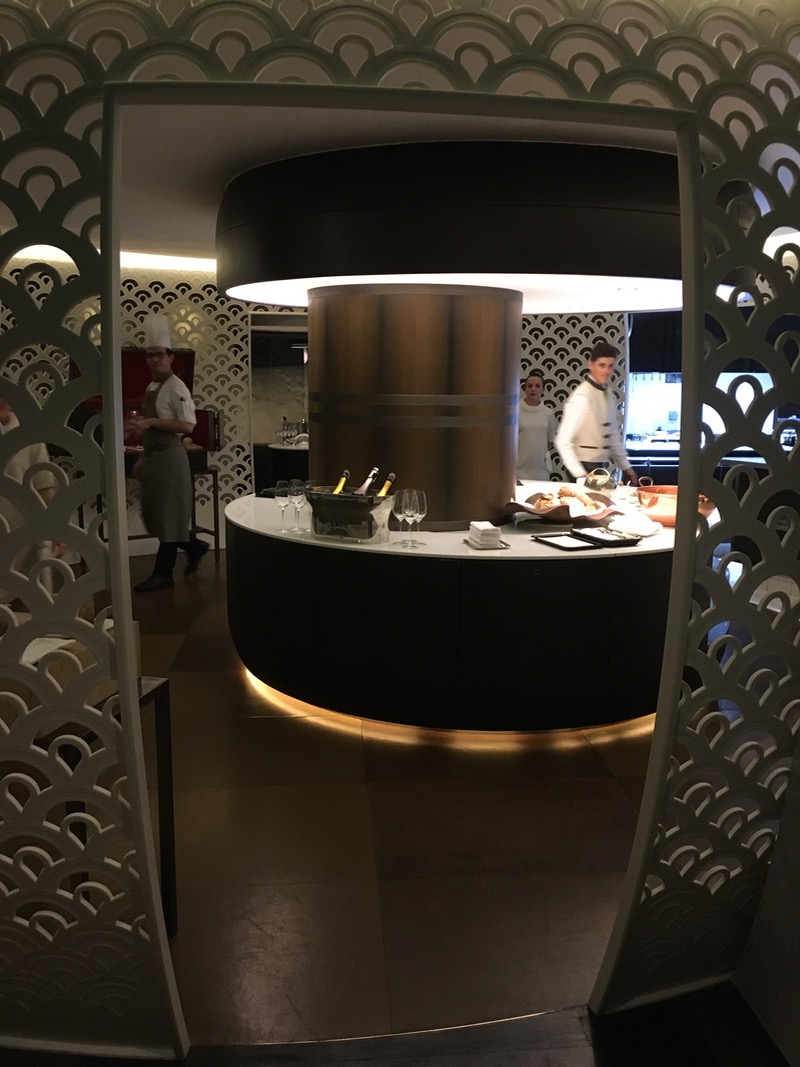 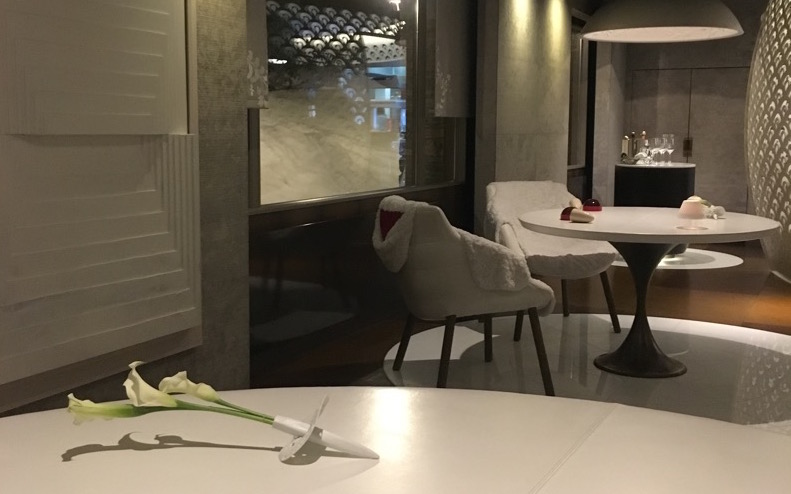 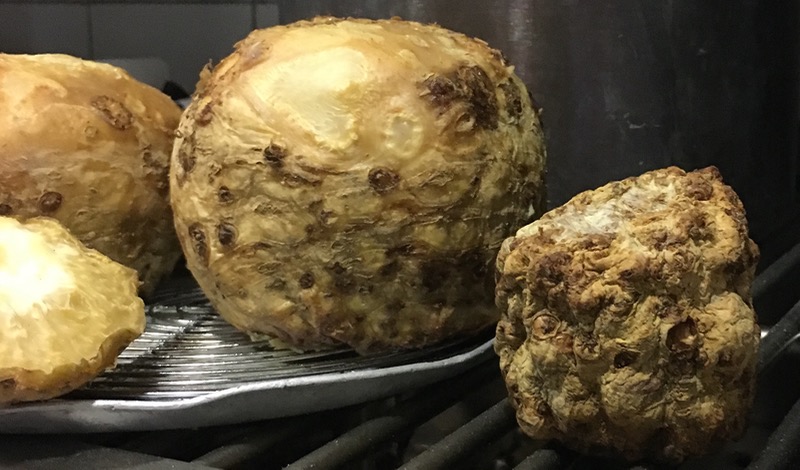 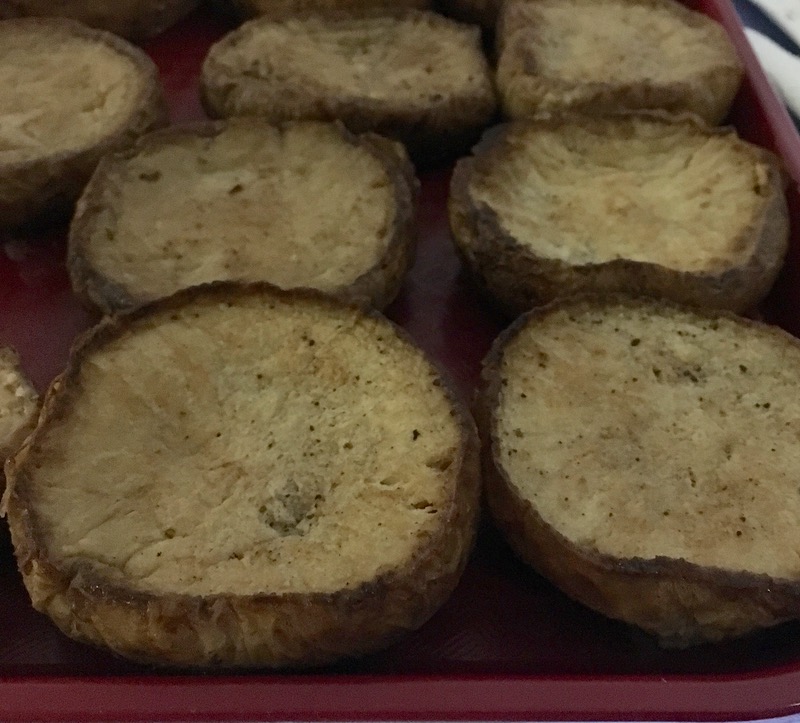 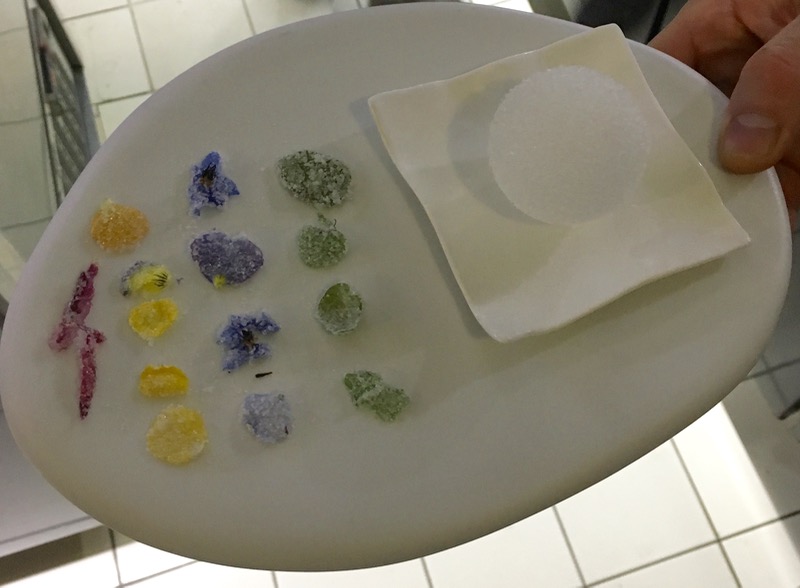 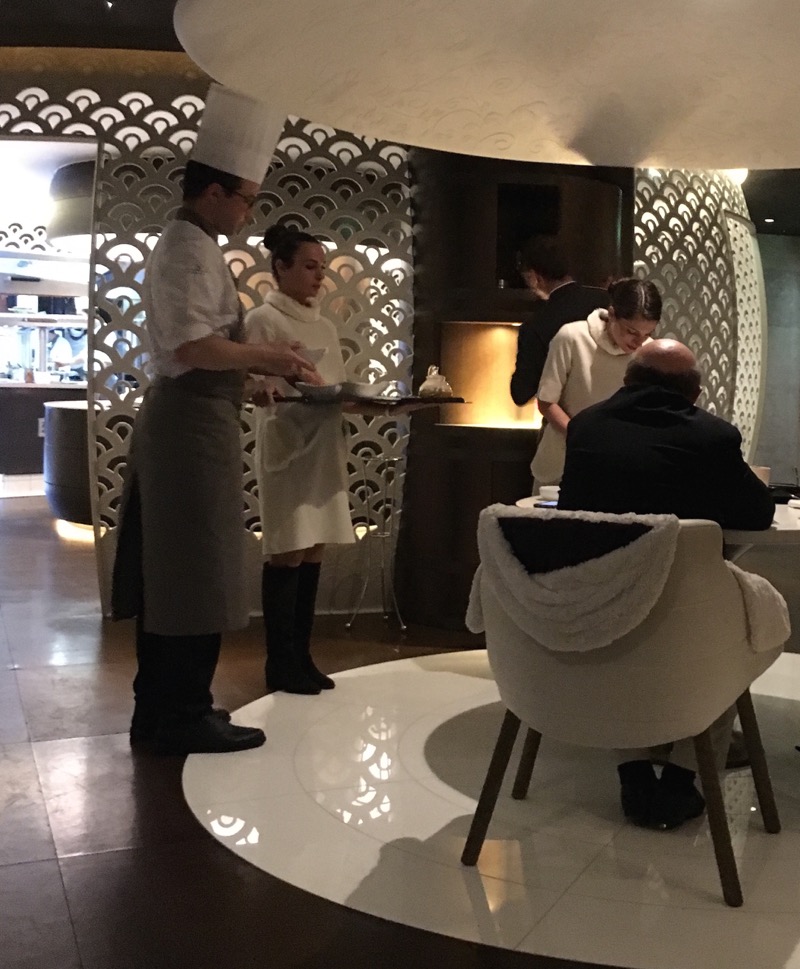 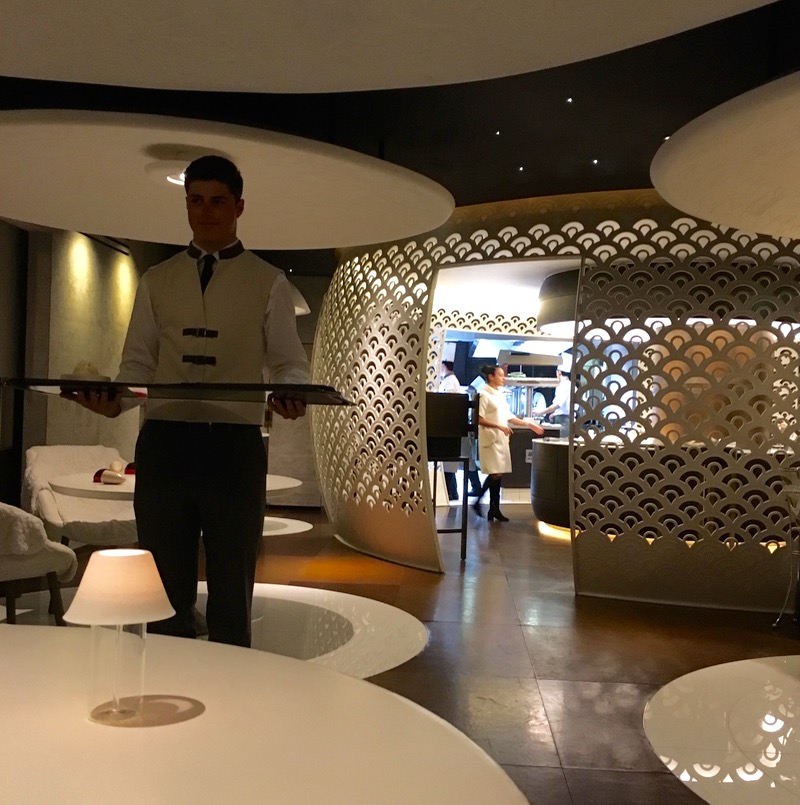 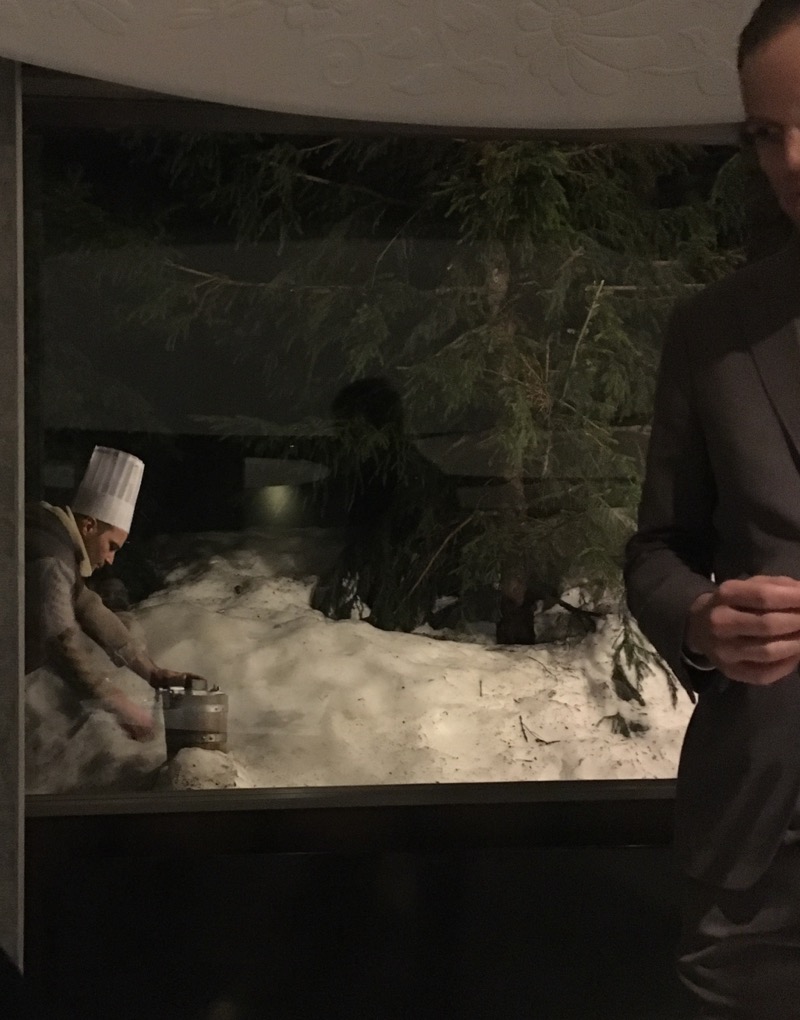 So why the number in the name? 1947 is the most prestigious vintage for the top Bordeaux growth Château Cheval Blanc, and the hotel named after this legendary wine is owned by LVMH, who also owns the château. The head chef at Le 1947 restaurant Gerard Barbin, is a protege of the Paris culinary legend Yannick Alléno. His know-how and the patented approach to Modern Cuisine was imprinted in the three Michelin stared Pavillon Ledoyen in Paris and his elevation of Le Meurice that predestined Le 1947 restaurant to the new heights of success. Le 1947 was finally awarded its third Michelin star in the 2017 Guide, but the journey was not straightforward. You will see Alléno’s name on the menu, a franchise-like practice haloing also gastronomic restaurants today. I think, that it would be more fair to give also some visible credit to the head chef who actually directs the kitchen team. Reaching the third star in the Michelin guide is never an easy ride. 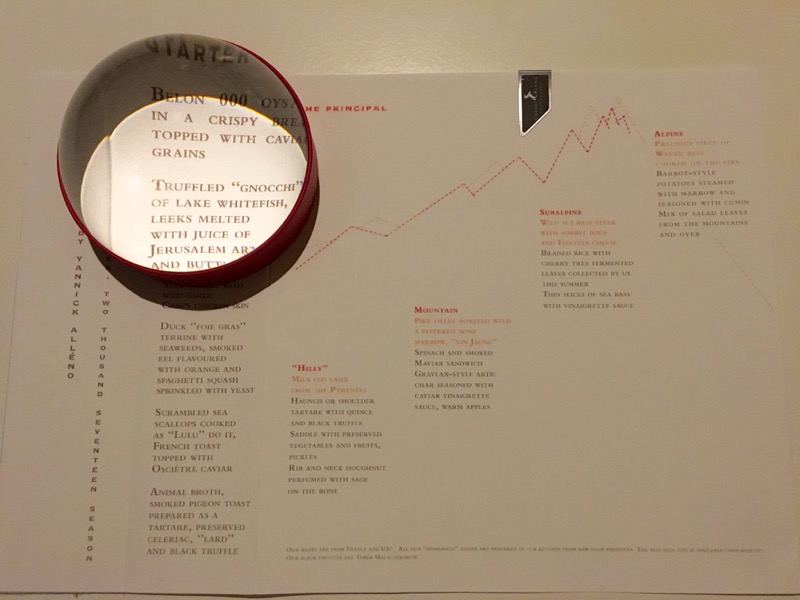 I have dined at the Cheval Blanc’s gastronomic restaurant for years and the transition was clearly illustrative of what separates one star from three star dining experience in France. The restaurant used to be in the large breakfast, lunch and dinner room all in one in this ultra-luxurious hotel. There, the attention to the diner as well as the experience itself were quite limited by the logistics. A couple years ago the gastronomic restaurant moved to its new, private room, lower down overlooking the snowy slopes on the chic Guerlain spa level. In its previous spot remained a casual brasserie filled with rare art pieces, yet suitable for any occasion.
Le 1947 was conceived with a totally open kitchen so, if you are curious, watch during your meal the happenings in the kitchen. You won’t hear any noise [and kitchen swearing] there though, as the acoustics are brilliant.
To spark our palates, a bubbly aperitif (vintage Dom Pérignon) was offered in its central space – the perforated Corian sphere – between the kitchen and the dining room, all while we were invited to peak around the kitchen with the chef Gerard answering any queries. Well-informed, we settled into the mountain softness of the fluffy white chairs. Leaning forward to savour my first amouse-bouche, suddenly, I stopped and wondered… Uttering an extra word revealed an intriguing design feature – the round, umbrella-like ceiling structure above each table creates an echo. The other person won’t hear it unless he bends forward as well. So everyone at the table must be in this private space where art and sound ushers the diners into their own little world. Soon we were to learn that each table at Le 1947 restaurant is treated as a private guest. 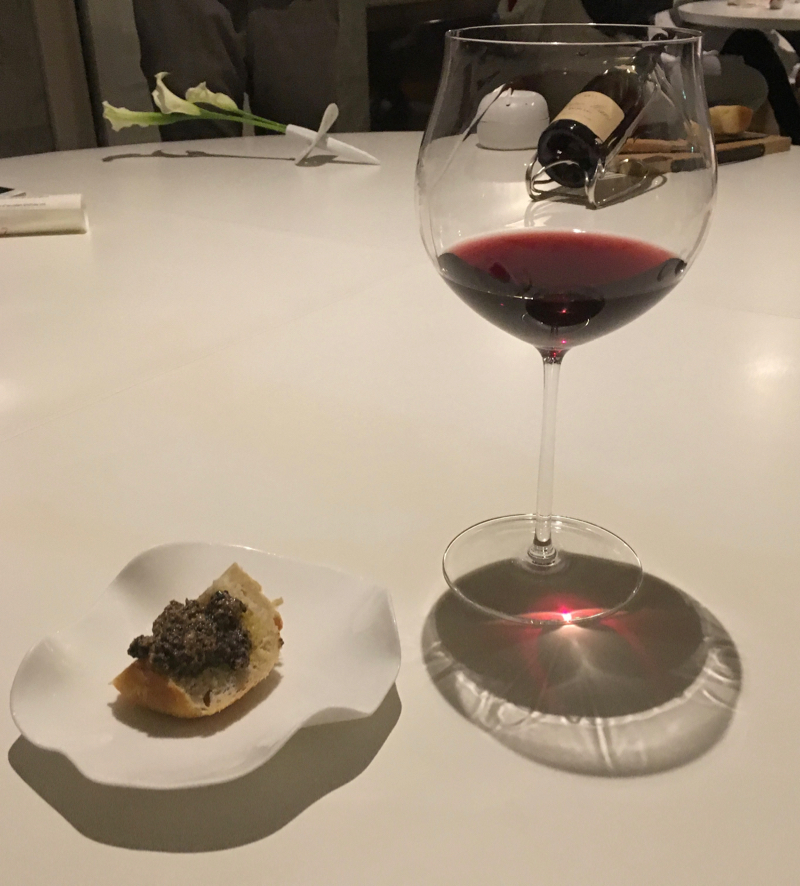 A series of diverse canapés were delivered like a suite of gastronomic attaches presented to a diplomatic mission, each more intriguing than the previous. From the Tiramisu face of the foie gras mousse, through a spring roll dressed fish rilette in a crispy potato topped with clover, a popcorn with potato crisps, a firm jelly with creamy touch and cracking pumpkin seeds. Then came the Butchers’s bread with truffle dressing. Our waiter cut the fragrant bread bun in half and stuffed it with a truffled flesh that accompanied our first sips of Pinot Noir. A more classic pan de campagne (country bread) was also served. No choices, unless you request the gluten-free phenomenon, but the bread was served with a superb mountain butter next to the more awkward hay butter creation of the chef.
At the table was poured the Soup of stones with a delicate “Royale”. Accompanied by a seasoned stone that was to be be “licked” after eating the very reduced broth with tiny shavings of truffles and ravioli. A real terroir experience! 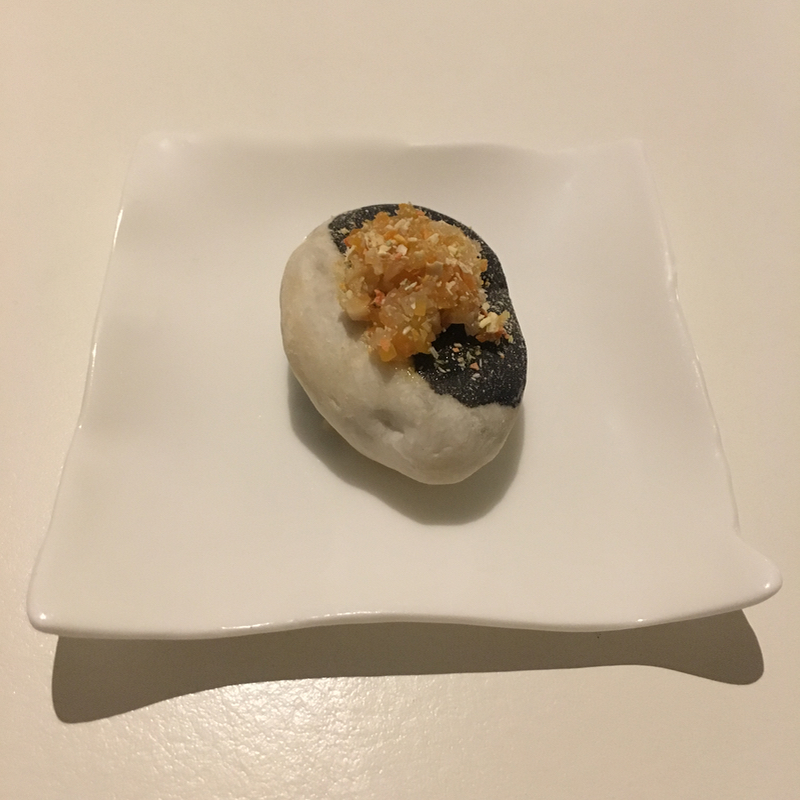 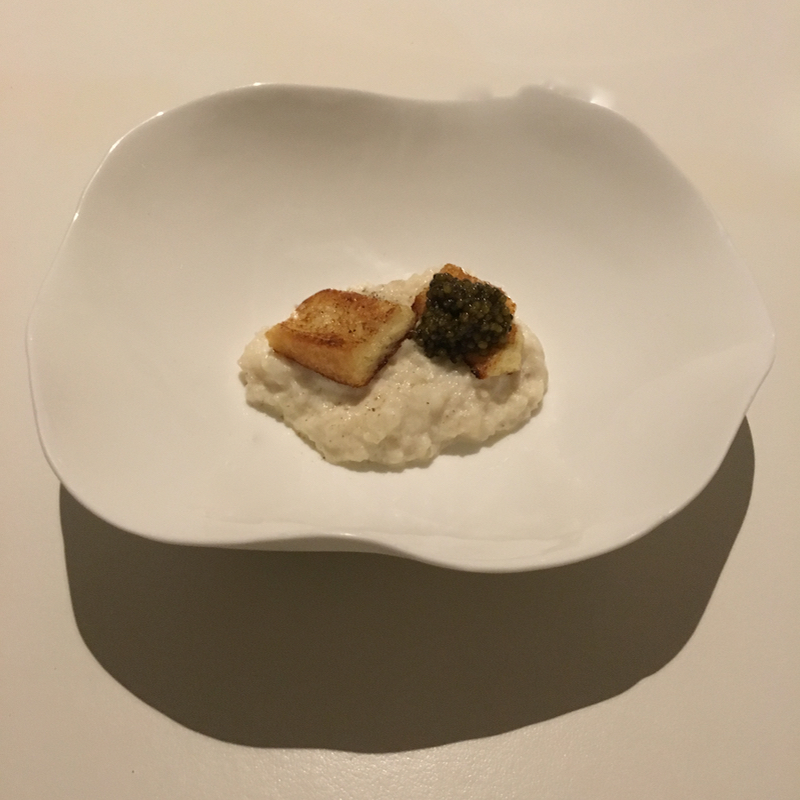 Some starters were not my cup of tea, but captured the contemporary dining trends. I got over the unethically produced duck livers on the gastronomic menus, so the Duck “Foie Gras” Terrine with seaweeds, smoked eel flavoured with orange and spaghetti squash sprinkled with yeast was out of question.
Aside this ethical slip, the choice was too appealing that each of us ordered two starters. I got Scrambled sea scallops cooked as “Lulu” does it, French toast topped with Osciètra Caviar (farmed as most legally have to be today). Outstanding! Lulu was a French lady who inspired the chef to scramble the scallops. The texture of the scallops resembled the creamiest scrambled eggs, the colour betrayed the by imaginative concoction though. The scallops looked more like a risotto, and although it was delicious, my mind kept going back to that “scrambled” concept on the menu.
My husband went for Bellon 000 Oysters in a crispy bread topped with caviar grains. The oysters were delicately baked into a fried bread-like cushion. Served with the seafood-friendly lemon and decorated with gold leafs, this was a small, yet decadent plate.
To follow, after the turnip was introduced to us in the kitchen, we both had to try the Turnip Confit during two days enhanced with mushroom extraction, stewed morels with wild garlic and crispy chicken skin. A mouth-puckering intensity of the extracted broth was supported by the honeycomb-shaped morel mushrooms and the very slowly, on low temperature, cooked turnip. The torn strips of crisp chicken skin were the cherries on the savoury tart of this plate.

Sauces and Terroirs in Modern Cuisine 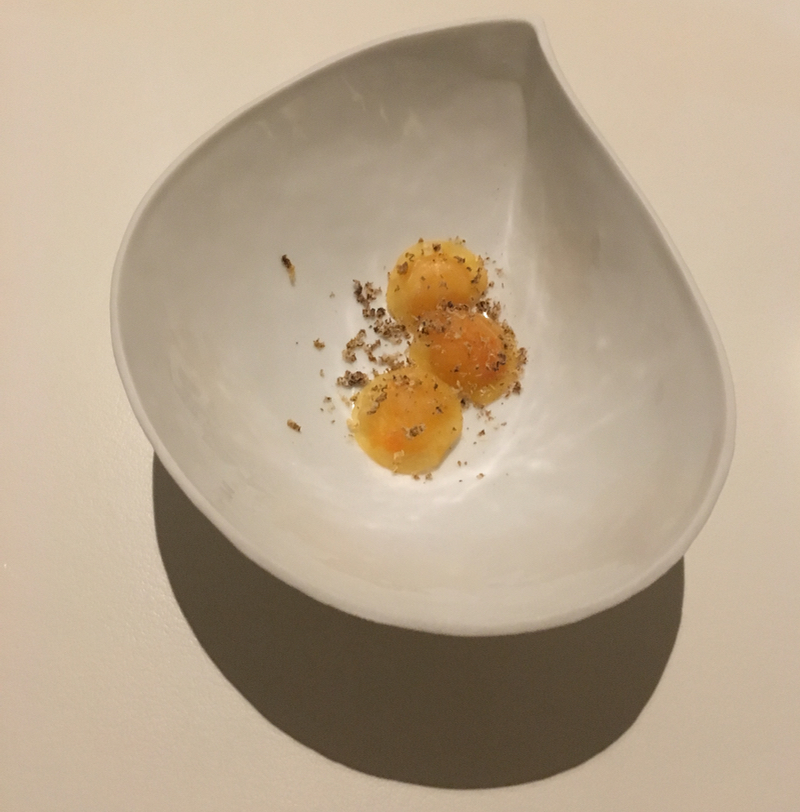 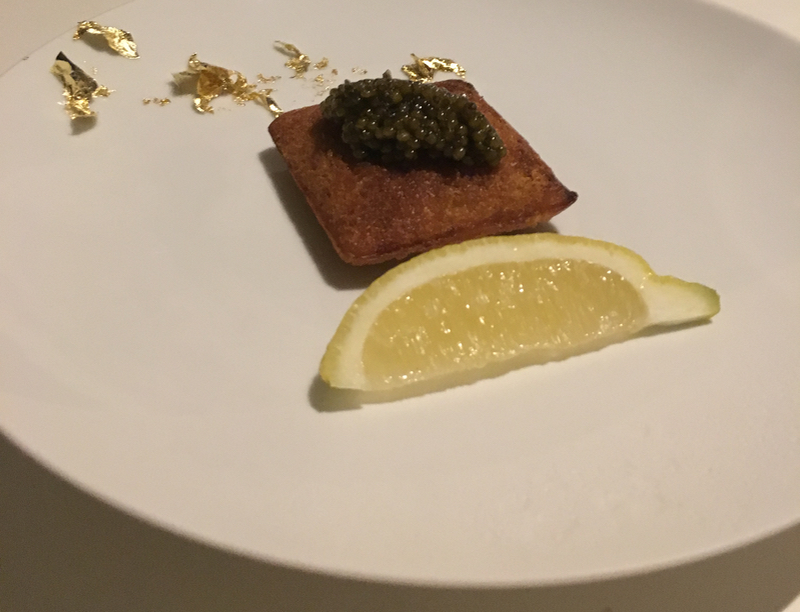 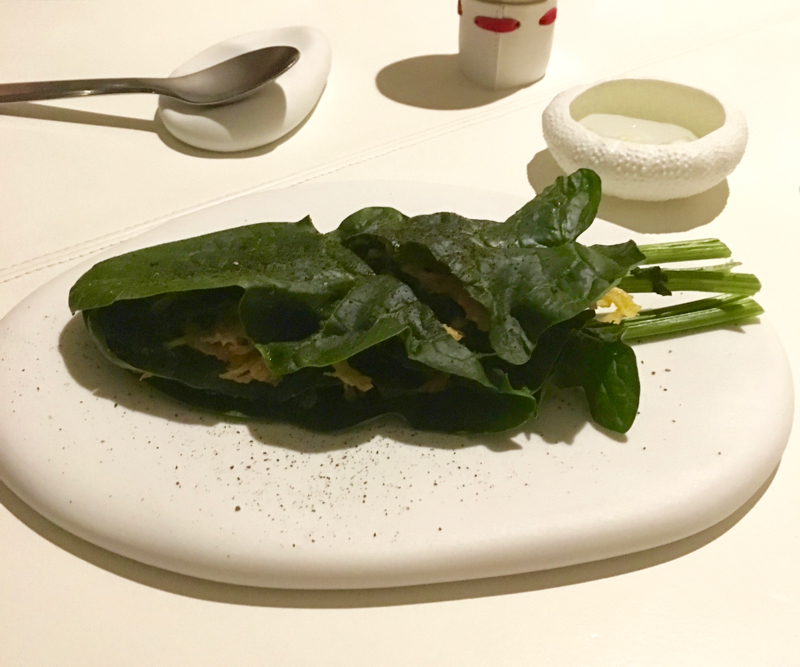 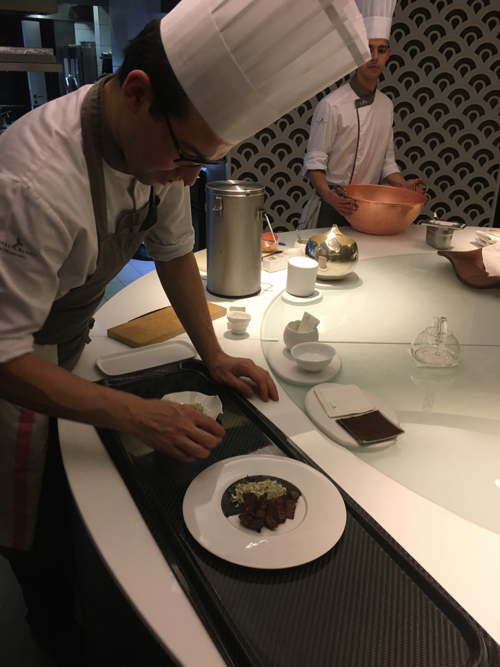 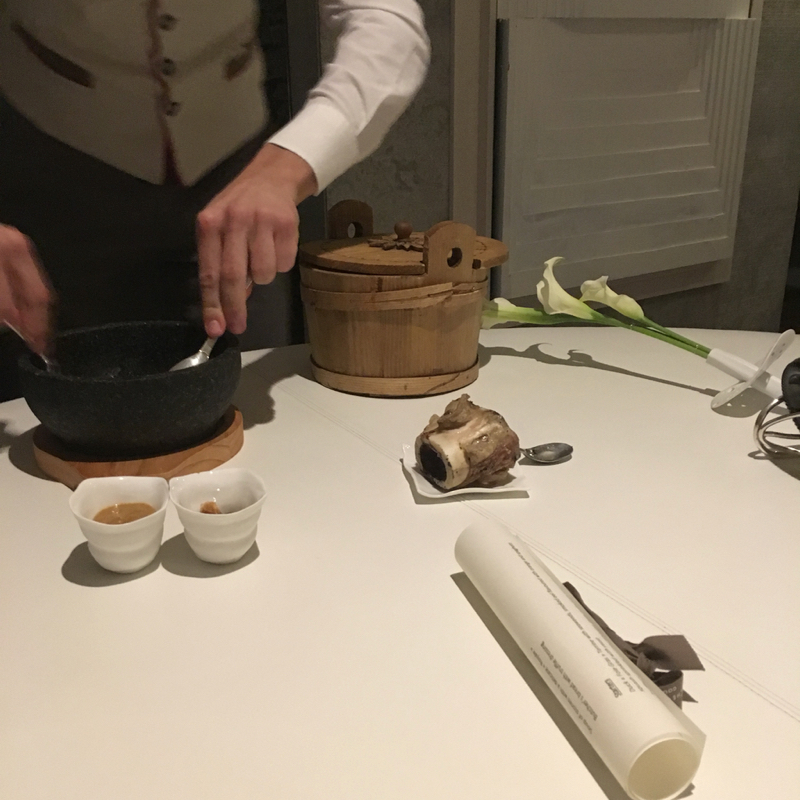 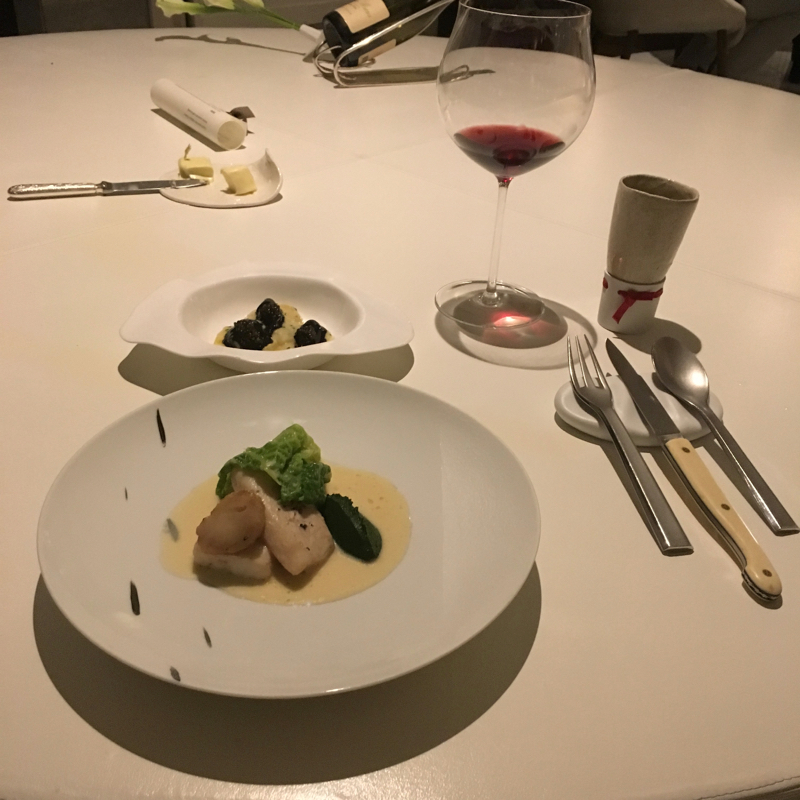 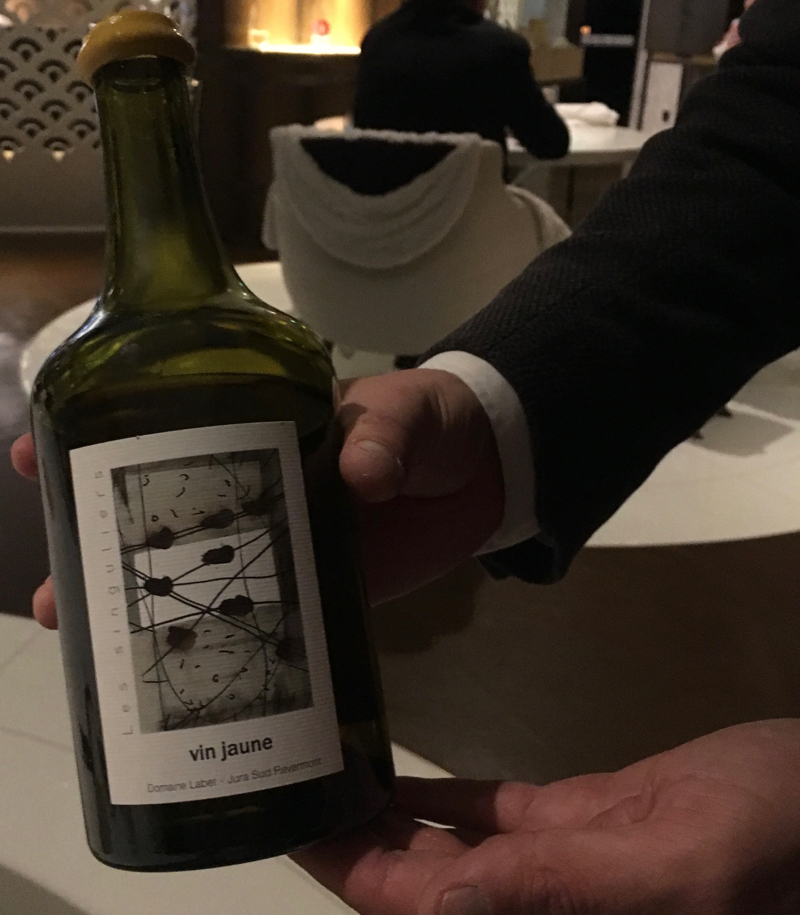 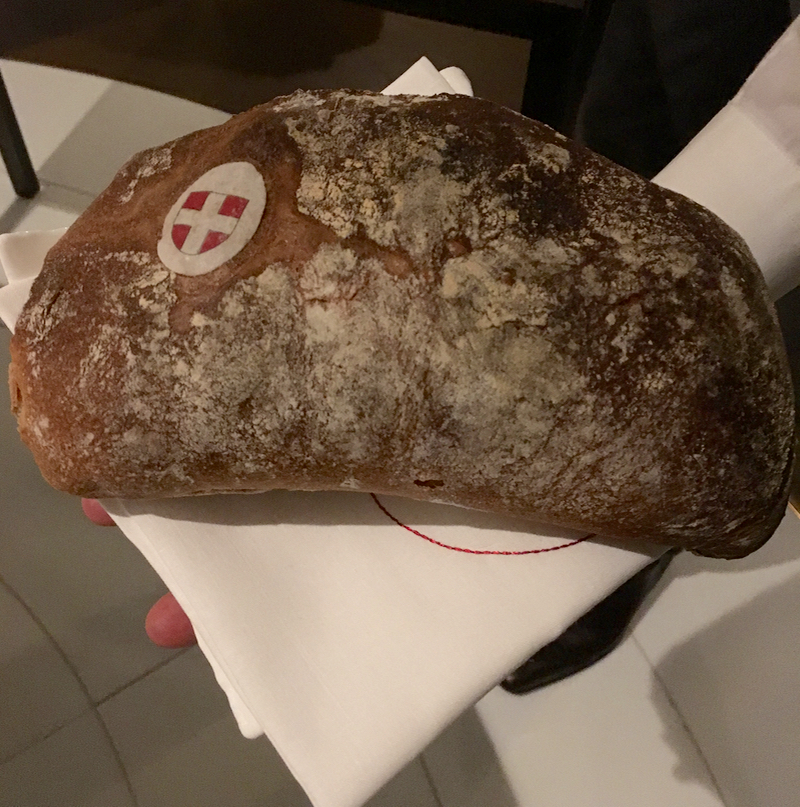 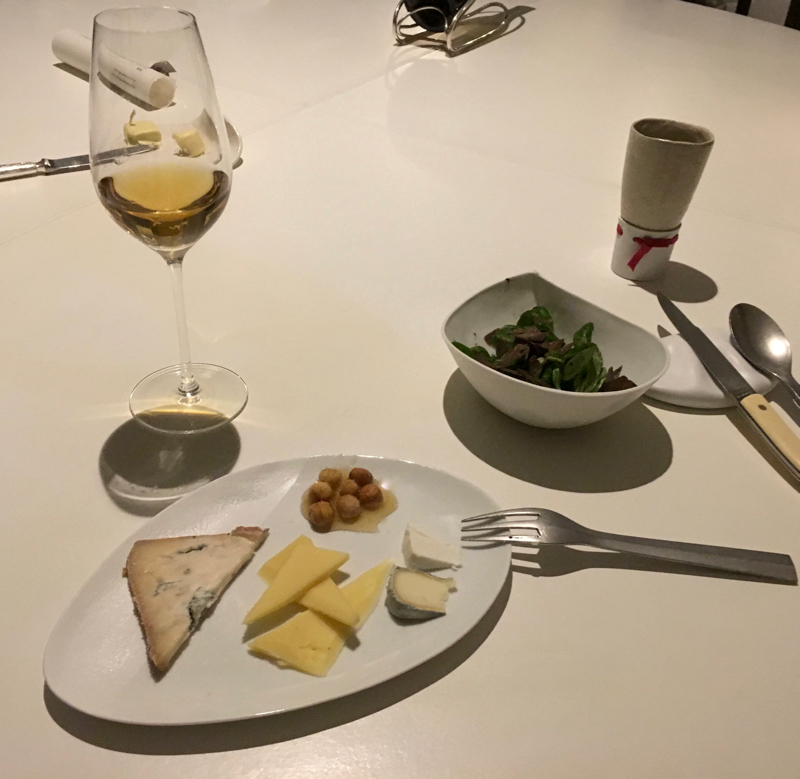 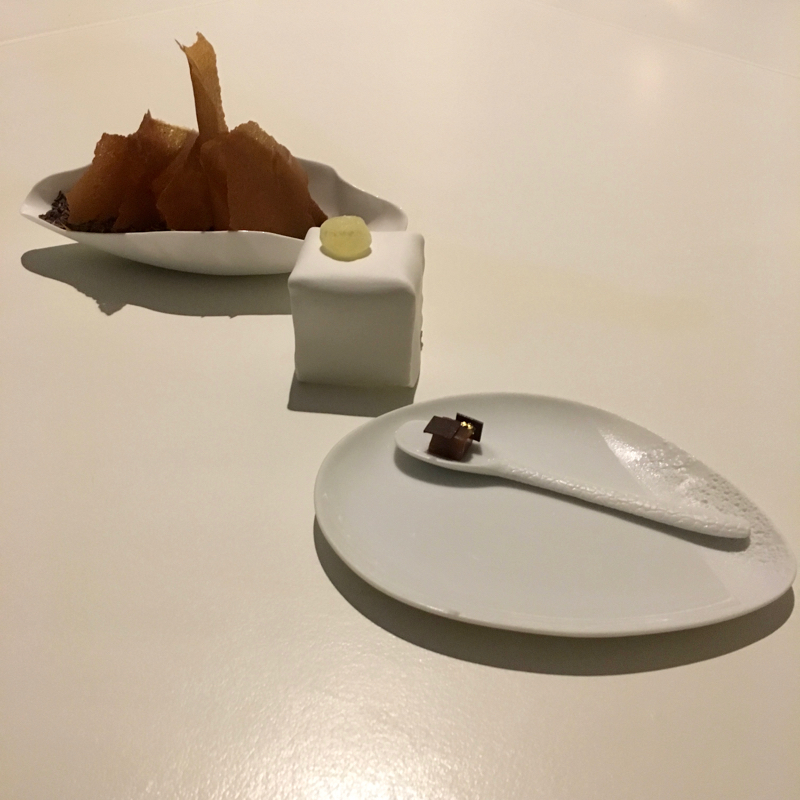 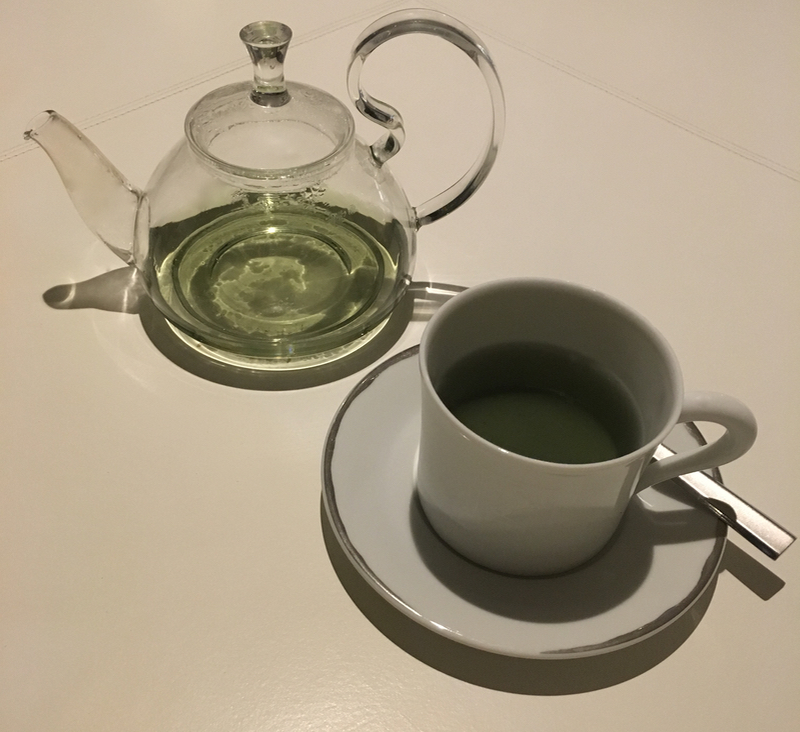 The chef shared a recipe for Spinach and smoked Maviar “sandwich” served in the tasting menu that is utterly delicious as he treated me to. It looked simple enough for me to make at home. Imagine, rösti potatoes wrapped in greens with a dash or creamy ricotta. Now, I am warming my dehydrator to make the spinach ash.

Wash, peel the potato then slice it thinly and cut as a julienne. In a non stick pan with clarified butter cook a thin pancake of potato julienne. Mix spinach ash with ricotta cheese, season with salt, pepper and olive oil.

Spread a layer of ricotta and spinach ash on a big leaf(washed)of spinach, then place a piece of potato pancake. Cover with another spinach leaf, grate on top some nutmeg and espelette pepper.

Eat it as a club sandwich with your hand.

The chef had also a surprise for my ‘Alpine Journey’ taking husband, whose “Precious piece of Wagyu beef cooked in the Fire” served with on our table mixed Barbot-style baked potato steamed with marrow and seasoned with cumin, got a bit of molecular cuisine touch. Watch in the video bellow how the liquid nitrogen is being used to cut the lettuces into a crispy sorbet-like side dish. I got a bowl too and the sommelier assisted on the preparation. The chef played the role of the director during the entire evening. He did not cook at that time, just finished all the plates with his fine touch.

The wine list sparks with vertical bottles in some mesmerising sizes of the Chateau Cheval Blanc red Bordeaux. This elegant beauty from the right bank enchanted me when tasting the 2009 vintage en primeur. Each year, a different vintage is served by the very pricey glass at the Cheval Blanc’s Bar from the enomatic dispenser, but at the Le 1947 restaurant we were granted an extra option, the grand 2005 vintage poured from the more advanced Coravin. This system does not let any oxygen into the bottle, while sealing the empty space with a protective gas so the bottle remains as if it was never opened. The thin needle like a bee sipping on the precious nectar of a blooming flower, just sucks in what is desired for the glass. Our bottle of Grand Cru Bonnes Mares, Burgundy Pinot Noir by one of our favourite producers Domaine de La Vougeraie was no less enchanting. The sommelier knew his carte des vins well advising on the vintage that was now perfect to drink. 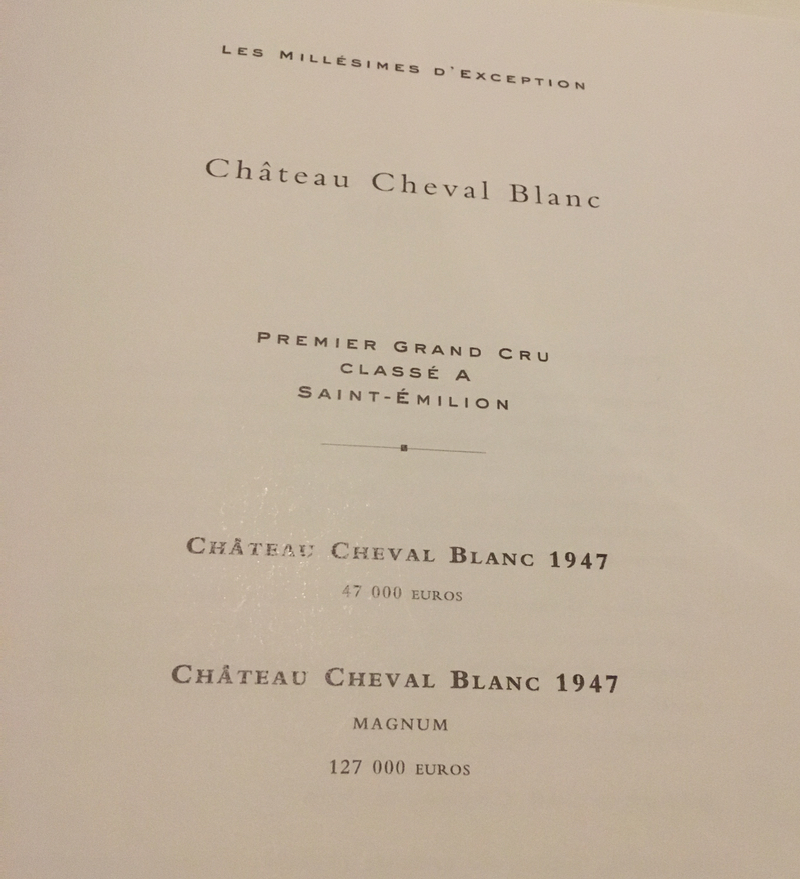 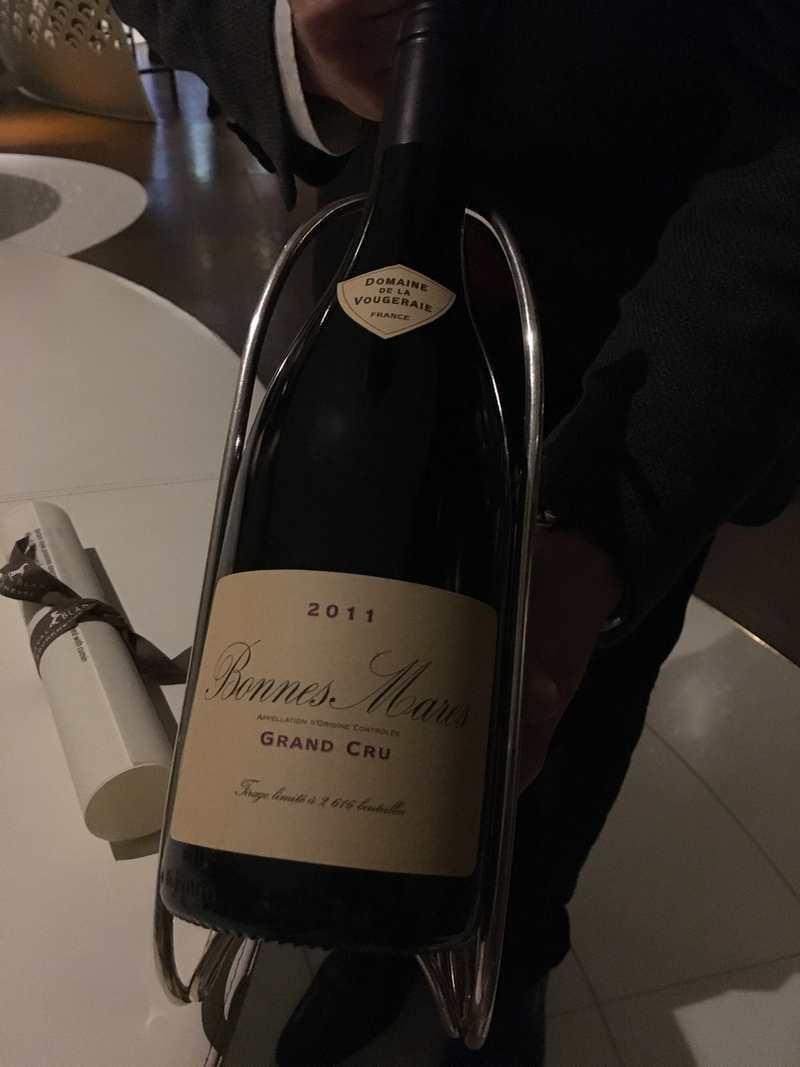 Mesmerised by the vinous pleasure from the Cheval, my favourite glass that evening was a Vin Jaune that I decided to pair with the extraordinary cheese [the cheese made it!]. The rare, aged Beaufort Chalet d’Alpage 2015 vintage from the award-winning cheesemonger Fromagerie Les Alpages in Grenoble was oozing with joy when it found a friend in this nutty and super dry white wine By Domaine Labet from the Jura. They have an online store offering the best French cheese, oh lalaa! The limited selection of just four, superb cheeses was served with honeyed hazelnuts, a small lamb’s lettuce salad with freshly shaved black truffles and traditional Savoyard bread.

Le fil fouge sucré a concept of a Grand Dessert of 12 sweet flavours is part of the degustation menu, yet our experience at Le 1947 restaurant ended with in snow prepared ice cream, that we saw being churned by one of the cooks in the course of the dinner and small assortment of sweets to accompany a super green mountain herbal tisane. A great digestion was assured, and we are already excited about the next skiing season to indulge at Le 1947 restaurant again!

For a more casual taste of the Alléno’s cuisine I like the café at the Dior in St Tropez, and I am looking forward to the new opening of bistro Terroir Parisien in Paris and Hong Kong this year.