Rising in the austerity as a positive side effect of the economic struggle and for some even a bare survival - On the shores of the mythical islands and on a larger scale in its capital something else has been bubbling up in the recent decade: the street art in Athens.

When you hear about Greece these days the echo beats the Greeks protesting against the austere measures imposed by its heavily indebted Government or the cries of the refugees swimming for their lives across the Mediterranean. On the shores of the mythical islands and on a larger scale in its capital something else has been bubbling up in the recent decade: the street art in Athens. Rising in the austerity as a positive side effect of the economic struggle and for some even a bare survival. “The financial crisis was an influence for artists in general; since then you were able to see that some graffiti artists started to relate their work’s concepts to this economic phenomenon. This means that the street art you could see would be more linked to our everyday reality. This makes the quality of street art better as concepts were more linked to our everyday political, financial and social life“, confirms Nikos Rude, a local guide and insider in the Athens street art scene.
He works for Alternative Athens, a group of local touring experts on diverse facets of the Greek Capital. The tour of current street art in Athens is one of its strengths.
The quality and scale of the art freely available to any passerby to enjoy in Athens is mesmerising when considered on a European scale. Perhaps, only Berlin in Europe, Melbourne in Australia and the wowing murals, elaborate stencils and raw graffiti in the politically disrupted Latin America (my street art reportage from Buenos Aires) can match up to the public spectacle of the rugged neighbourhoods of Athens. Nikos adds: “The Greek street art scene started in late 80’s to early 90s’, when it was known as graffiti. The past decade has been renamed street art, because it includes other influences apart from the traditional graffiti.” 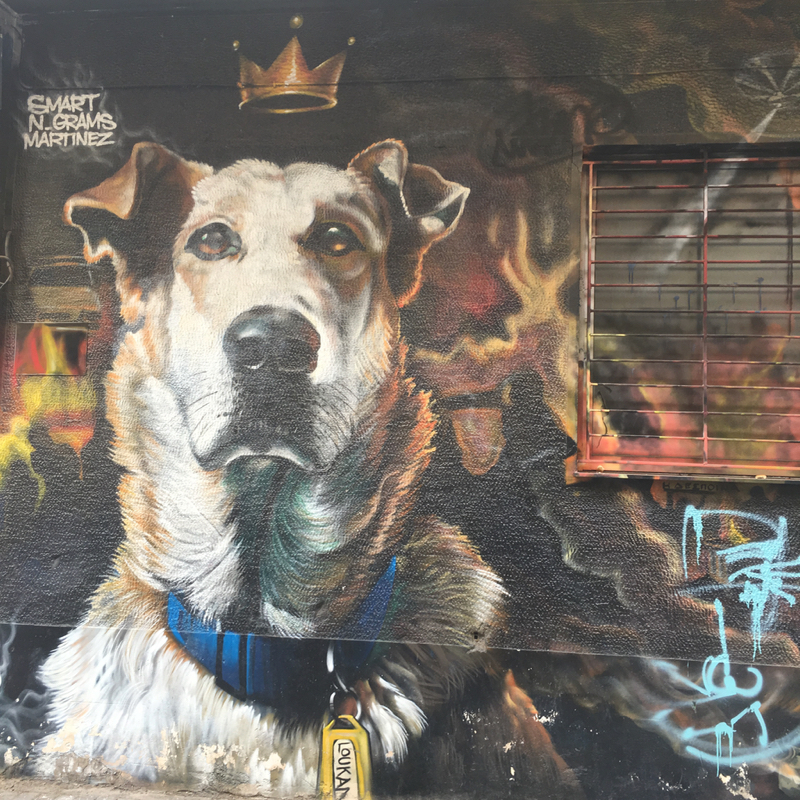 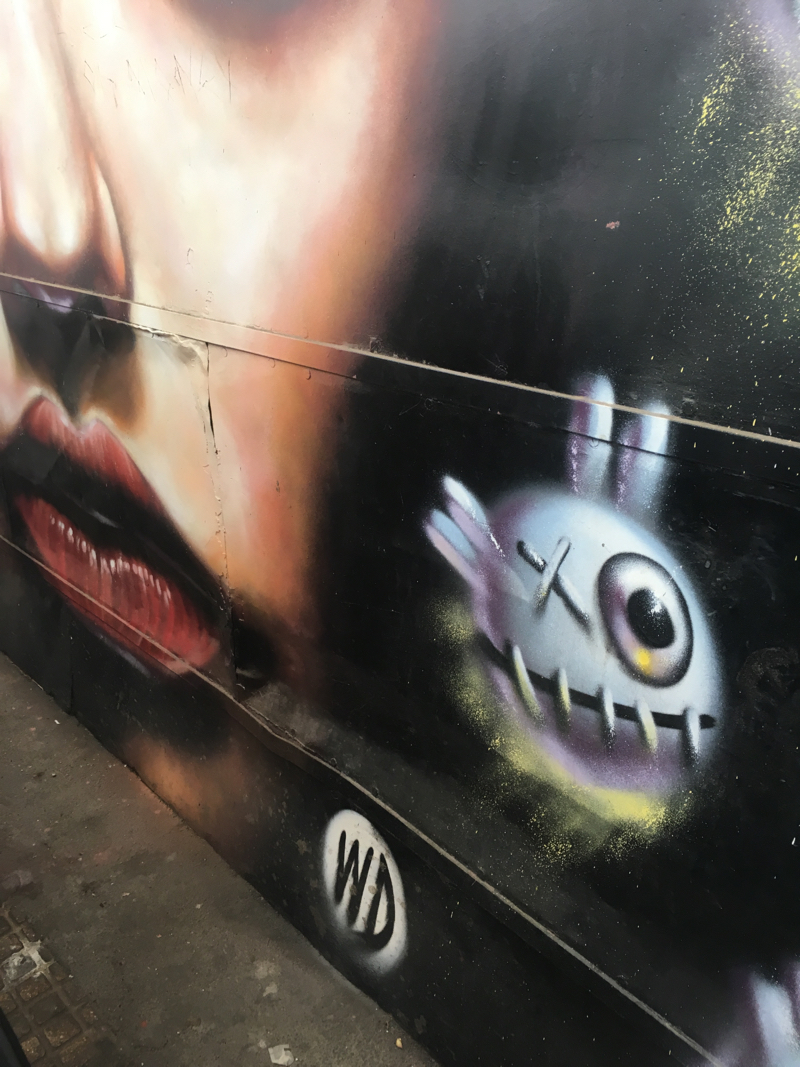 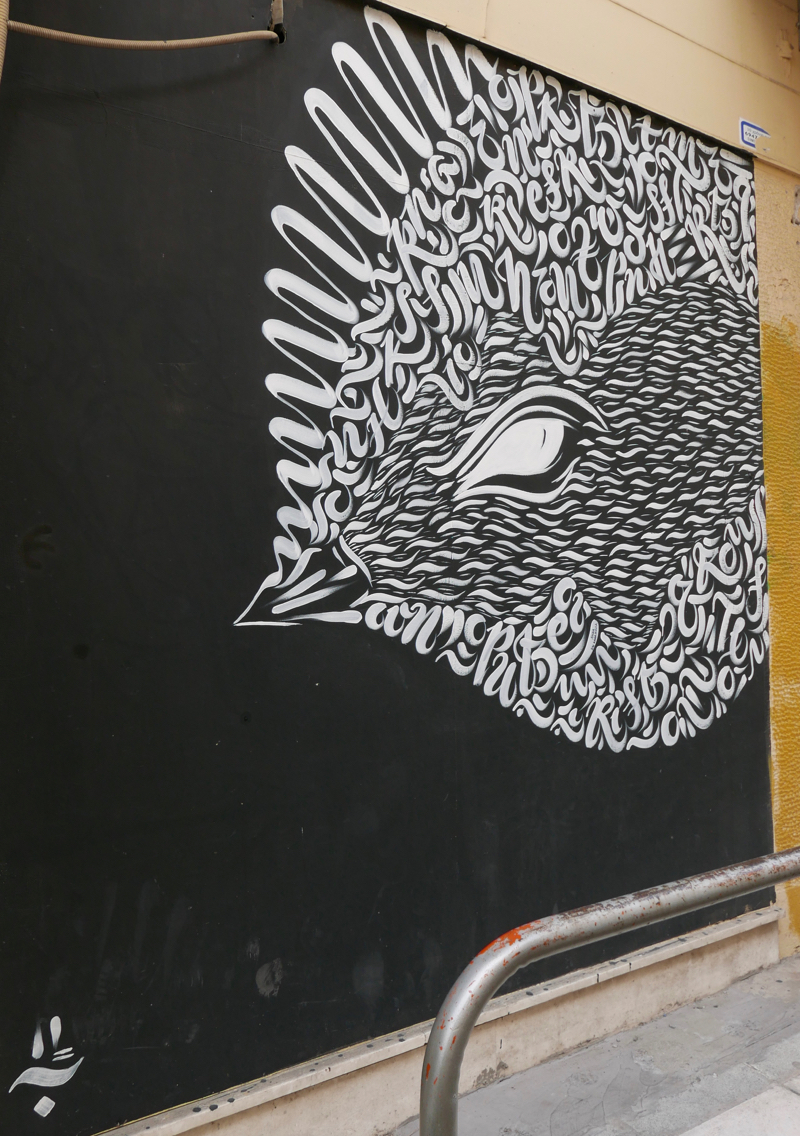 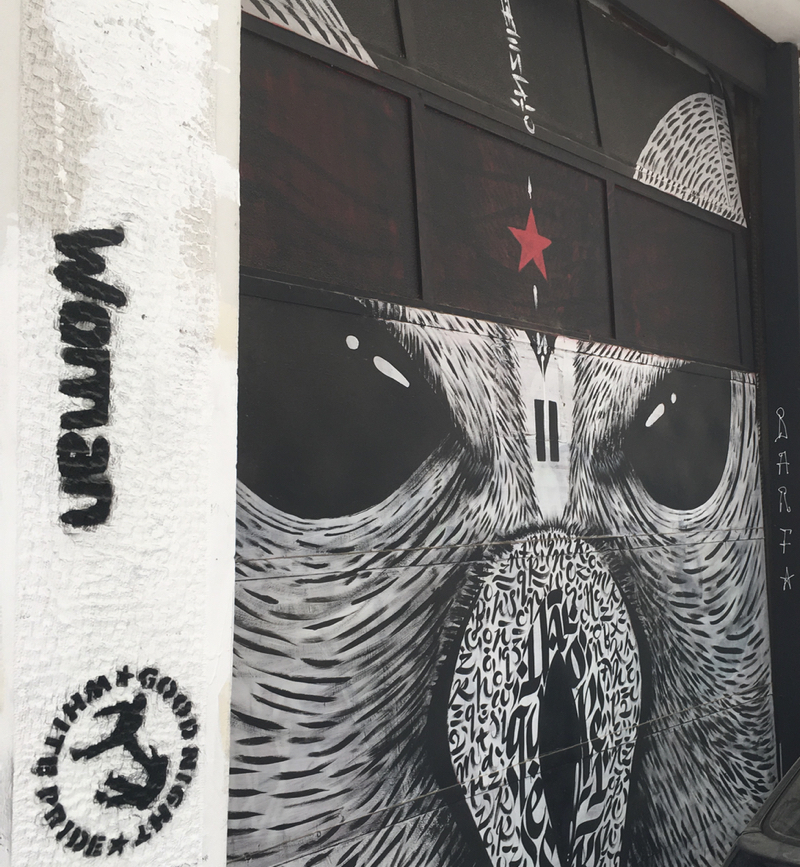 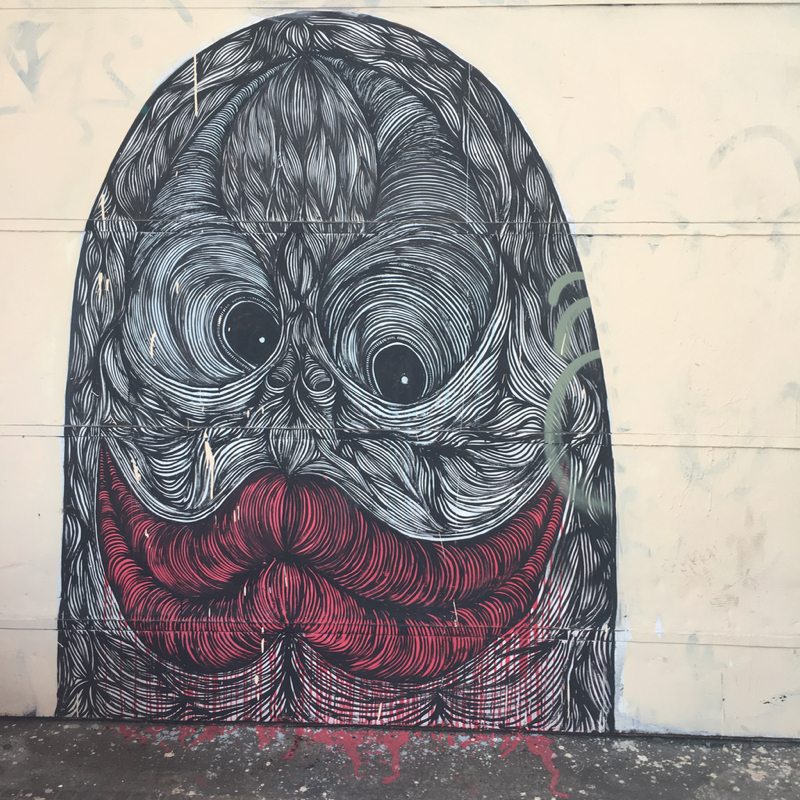 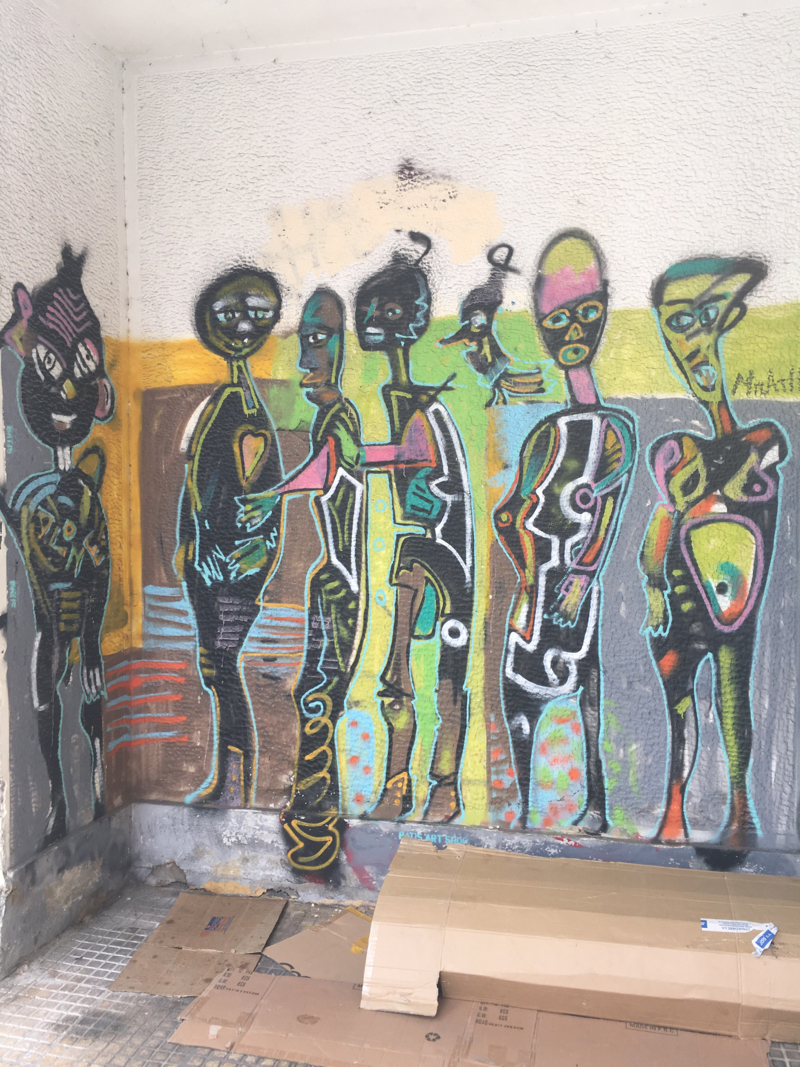 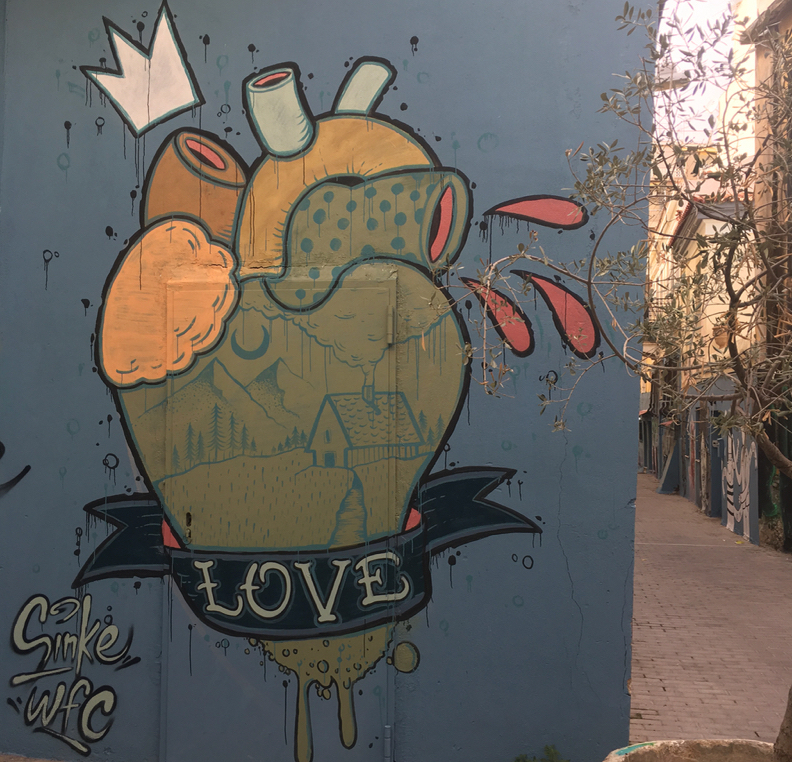 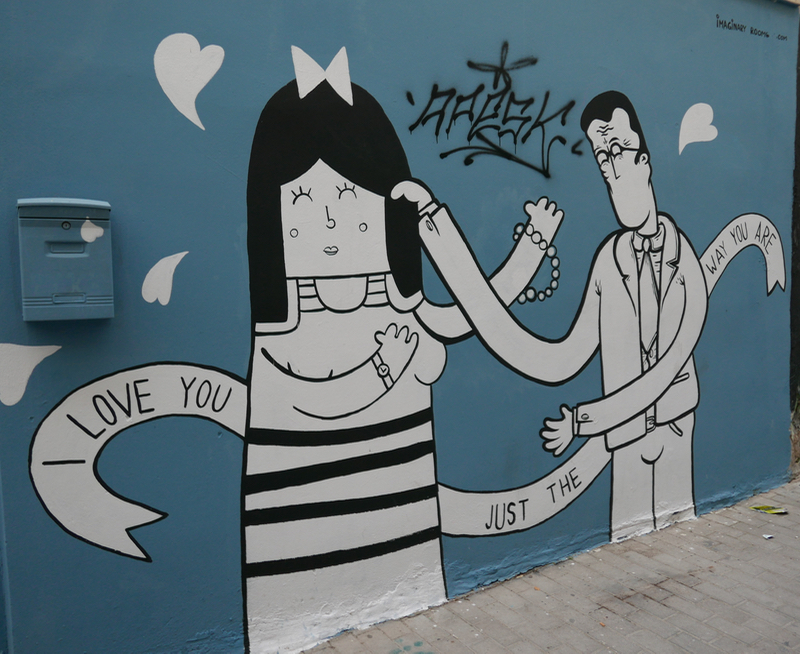 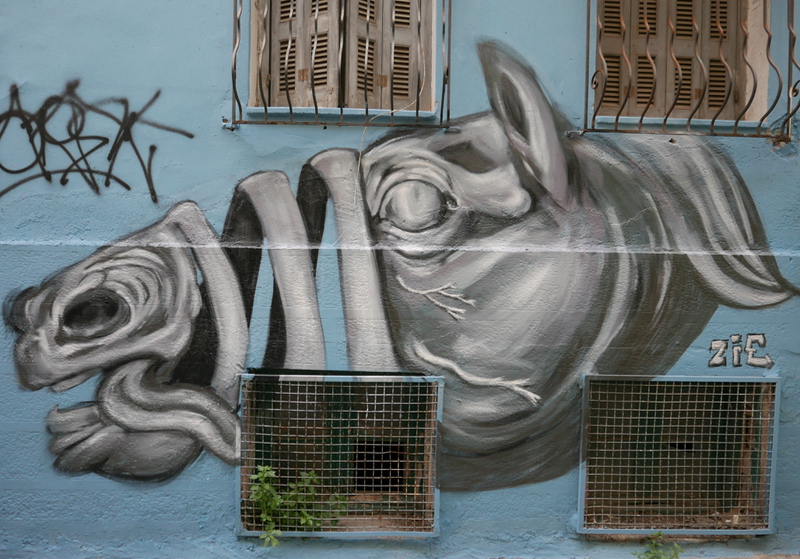 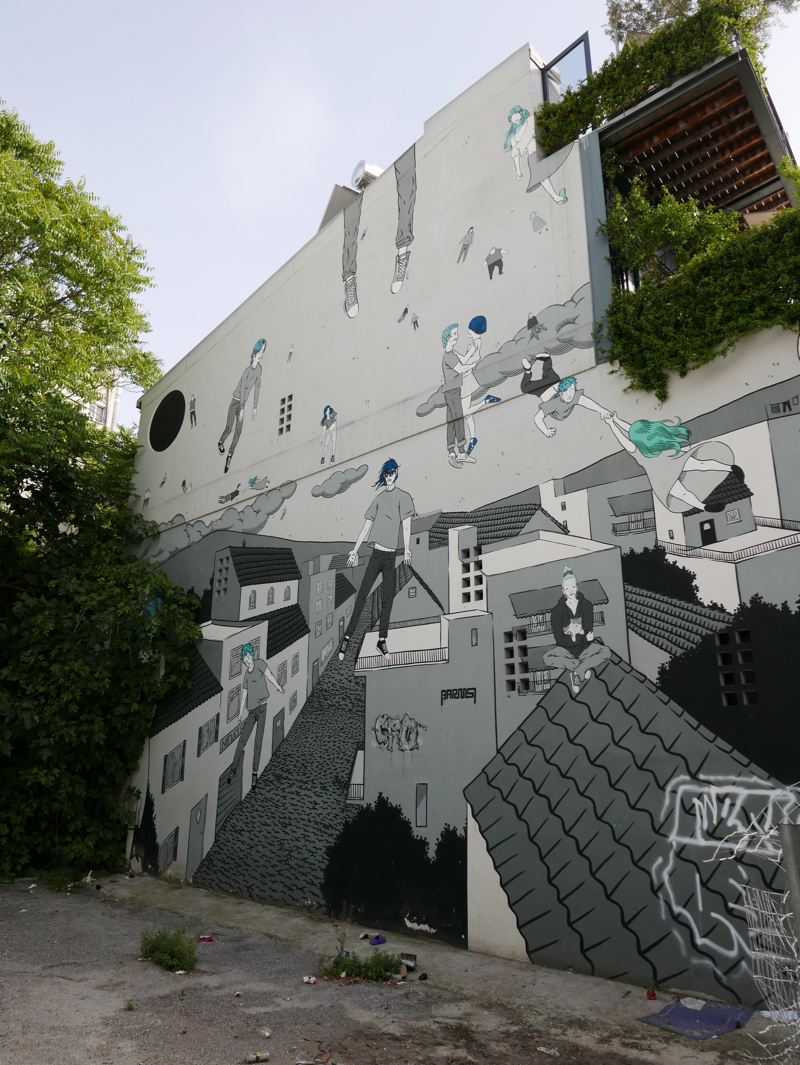 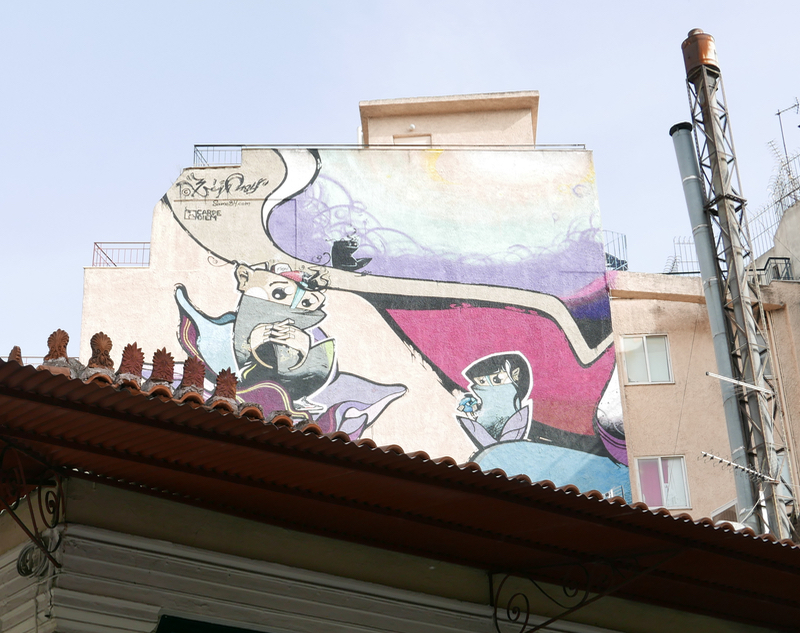 Internationally recognised Greek and some foreign artists (such as Osgemeos from Brazil, Bali [WD], America [Martinez],…), who exhibit their paintings in galleries, install contemporary sculptures around the world’s major cities, and practice art full time were commissioned either by the city, the Government or some private businesses to paint the walls with something more captivating than crumbling facades. Alexandros Vasmoulakis is one of them. His massive collages now appear anywhere from his home country, Berlin, Portugal, Tel Aviv to the industrial cities in China. His work has also appeared in print like The World Atlas of Street Art and Graffiti by Rafael Schacter and John Fekner and in a book by TASCHEN Trespass: A History of Uncommissioned Urban Art, Street Art Calendars. In Athens, the widely popular Superman (pictured bellow) was painted in 2011.
Some street art serves as public advertisement such as the Batis Art shop that supplies painting material. The colourful tribal theme above the heart image is one of such creative ads. Under it nests a covered temporary bed for a homeless person.

The street artists do not have a glamorous lifestyle in Athens. Nikos says: “Usually it is hard to make a living from street art, though I’ve met a couple of artists. The people that are producing street art are mostly working in creative jobs such as tattoo shops, graphic design, architecture. That doesn’t mean that these kind of jobs are always available when Greece is under a financial crisis.”

INO is another internationally commissioned artist making some money from his rugged walls beautifying activity. Nikos clarifies why; “Apart from the talent they have a great background in street art but also most of them own a degree in arts. This shows the level of the artists who are commissioned. They have gained a lot of fame from exhibitions, street art and other commissioned work.” Although anonymous, INO worked for National Geographic, Coca-Cola, the Onassis Cultural Centre, Story Nightclub Miami, Dj Avicii, and many others globally.

The US-born international artist Alex Martinez, also known by his tag name SHINE, worked as an illustrator and muralist in Greece and in London where there are many commissioned works of his. He even worked for an exhibition at the world-famous Madame Tussauds Museum. With them, the past decade saw these wall artists emerging in Athens: Bizarre, Bleeps, Heroes, STMTS (Stamatis), SHK, HIT, Sive, Ozone, Blaqk (in the gallery above the beautiful graphic black design), Simple Gee, and others like the skateboarder Billy Gee. The later utilised his degree in Graphic Arts and Realistic Design in his large colour-packed work based on realistic imagery. One of his most popular works on the streets of Athens is Loukanikos, in the above gallery the leading image of a stray dog that became a common sight during the austerity protests. 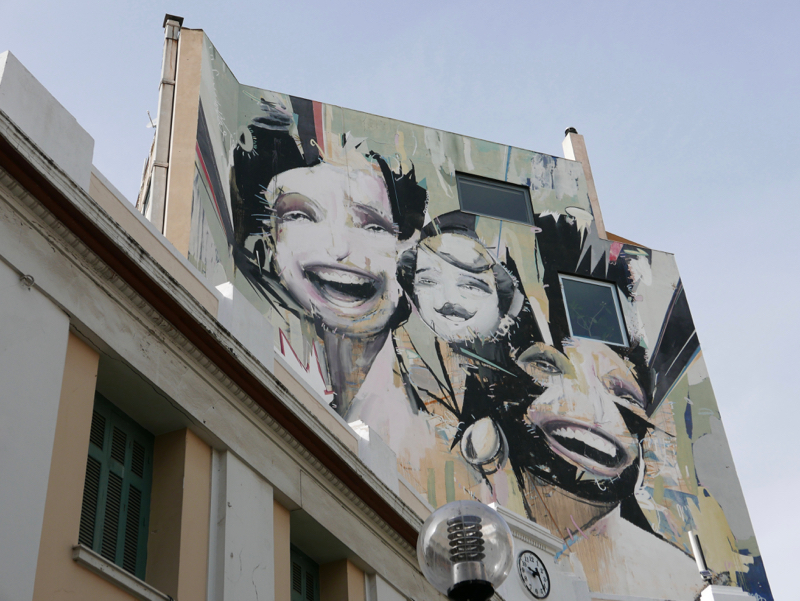 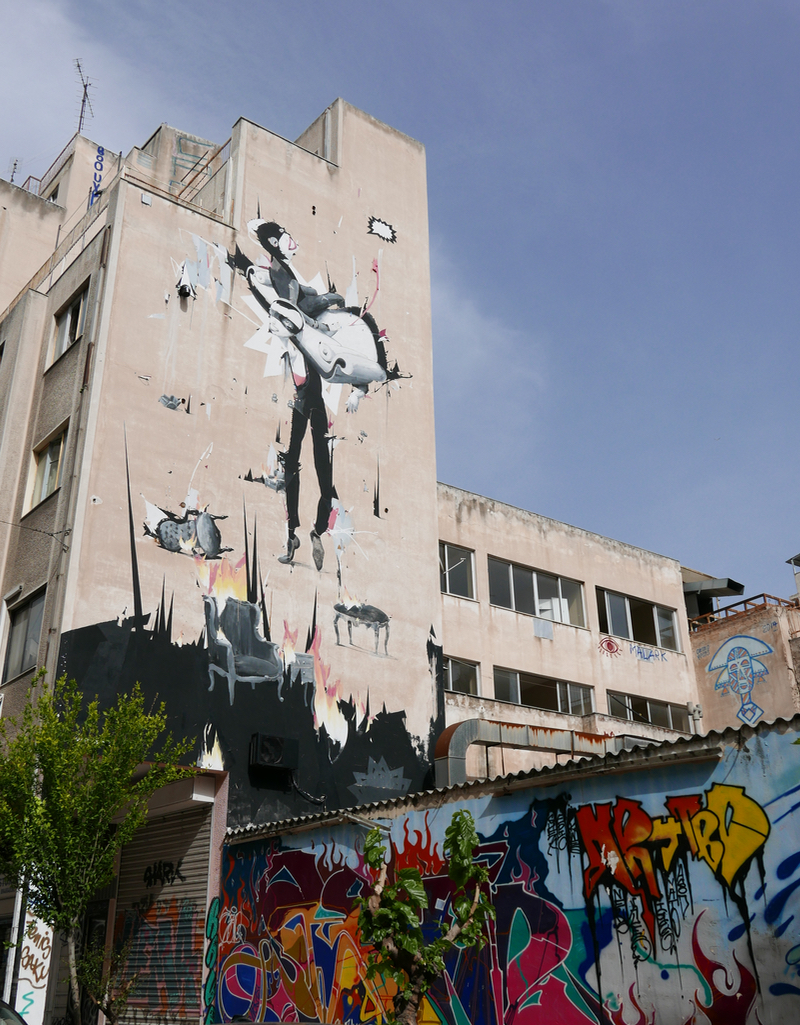 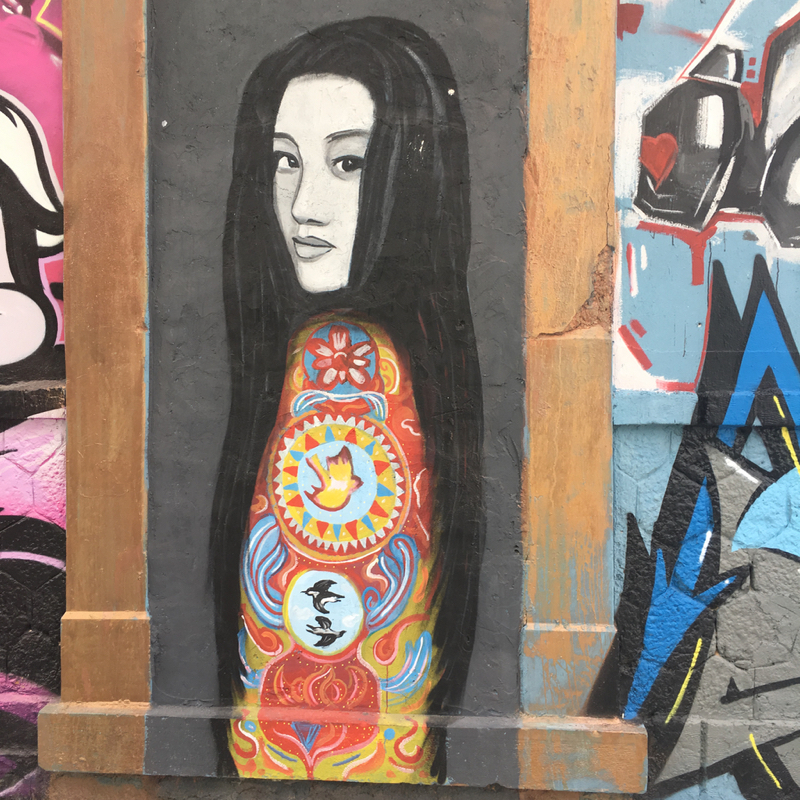 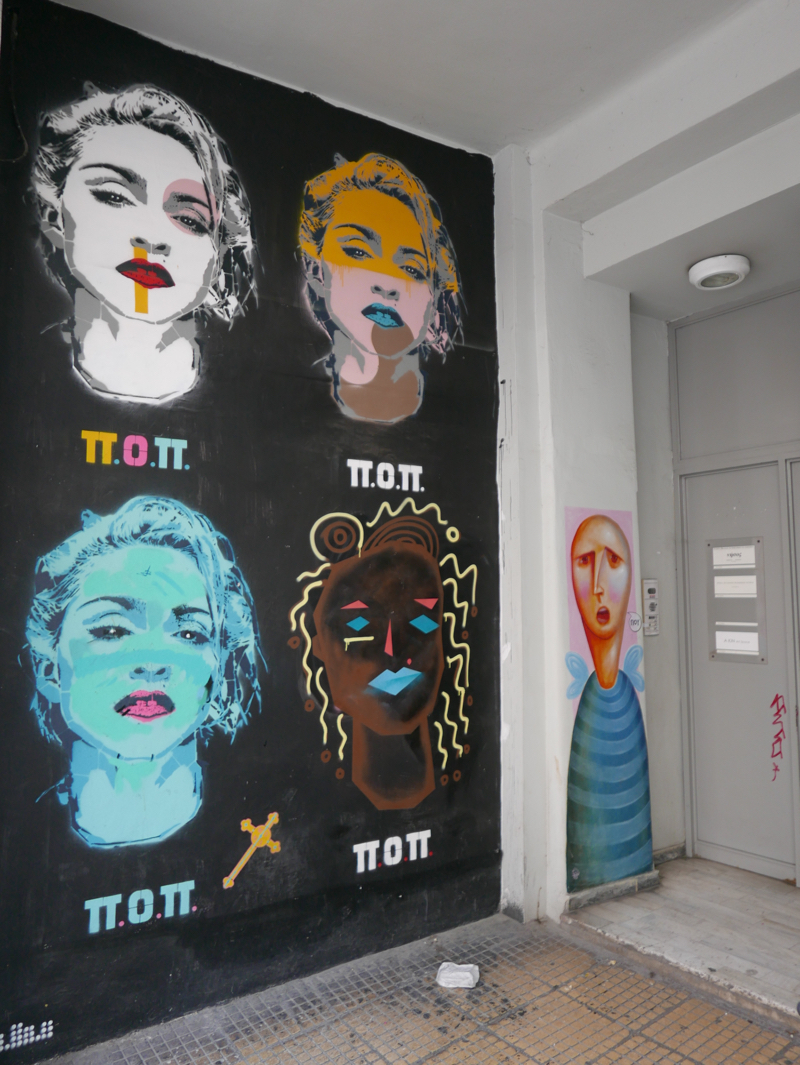 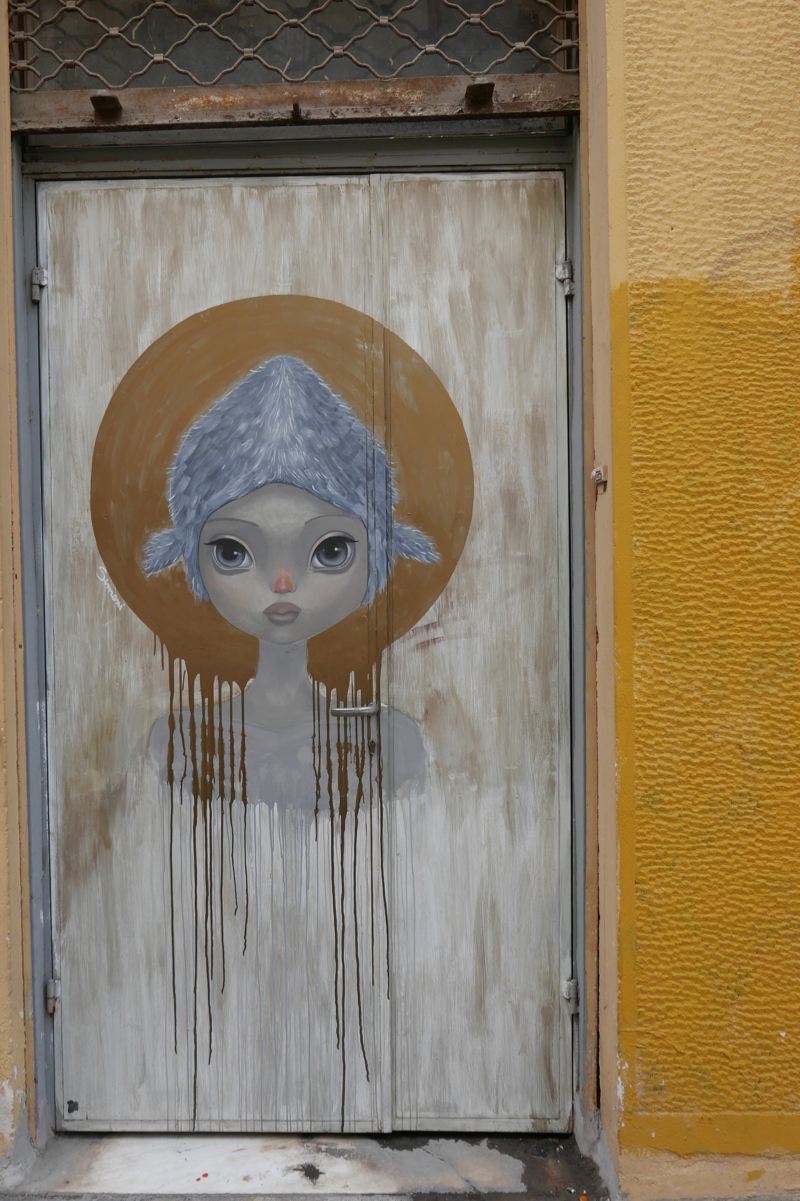 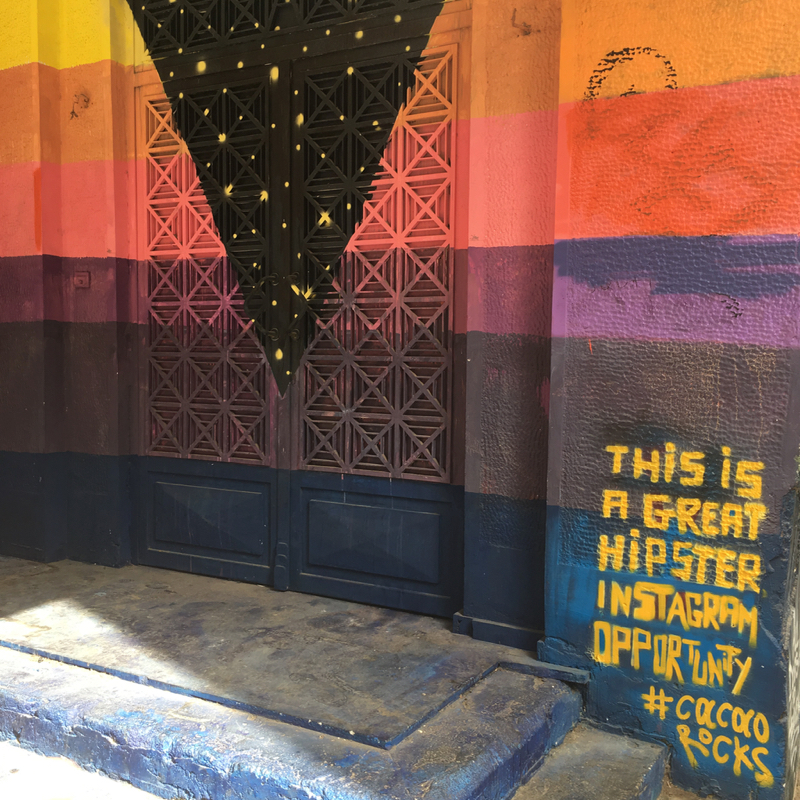 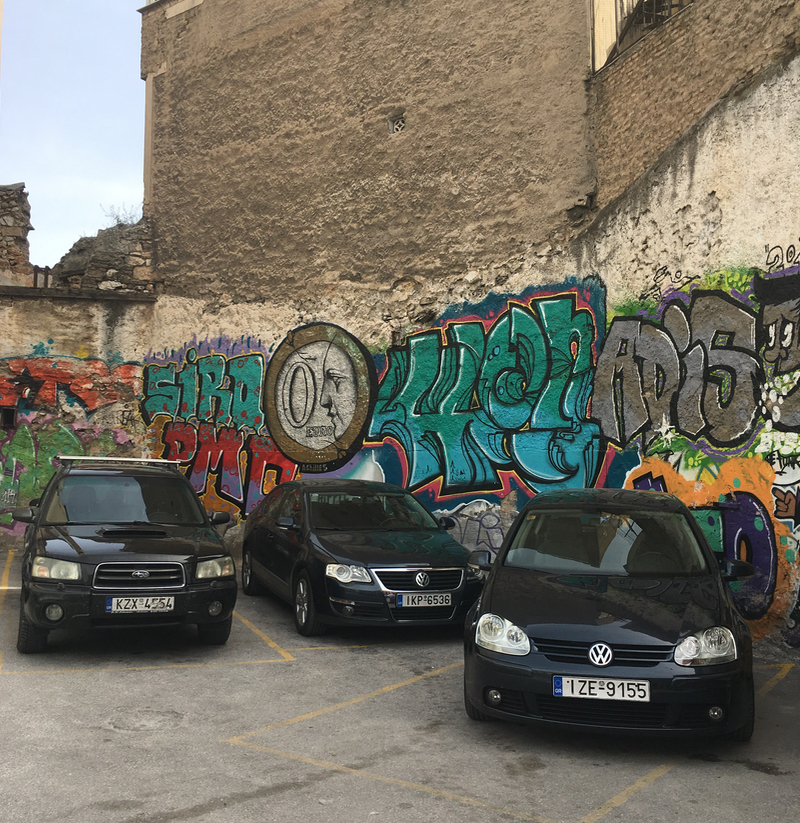 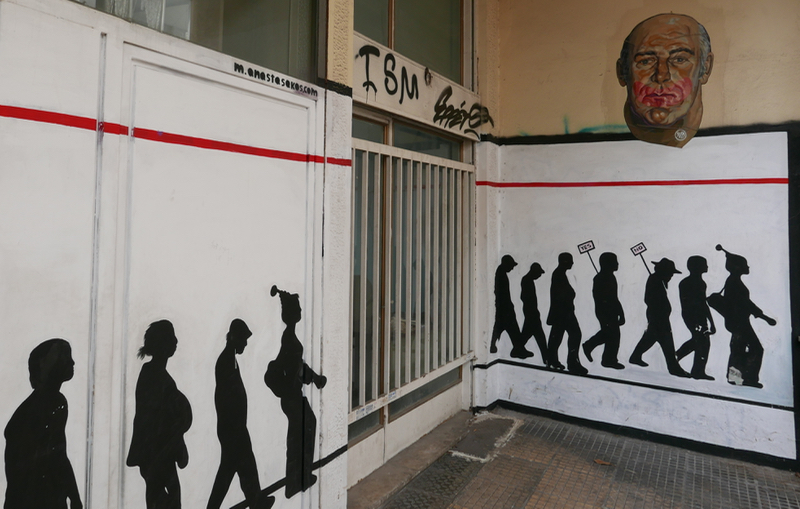 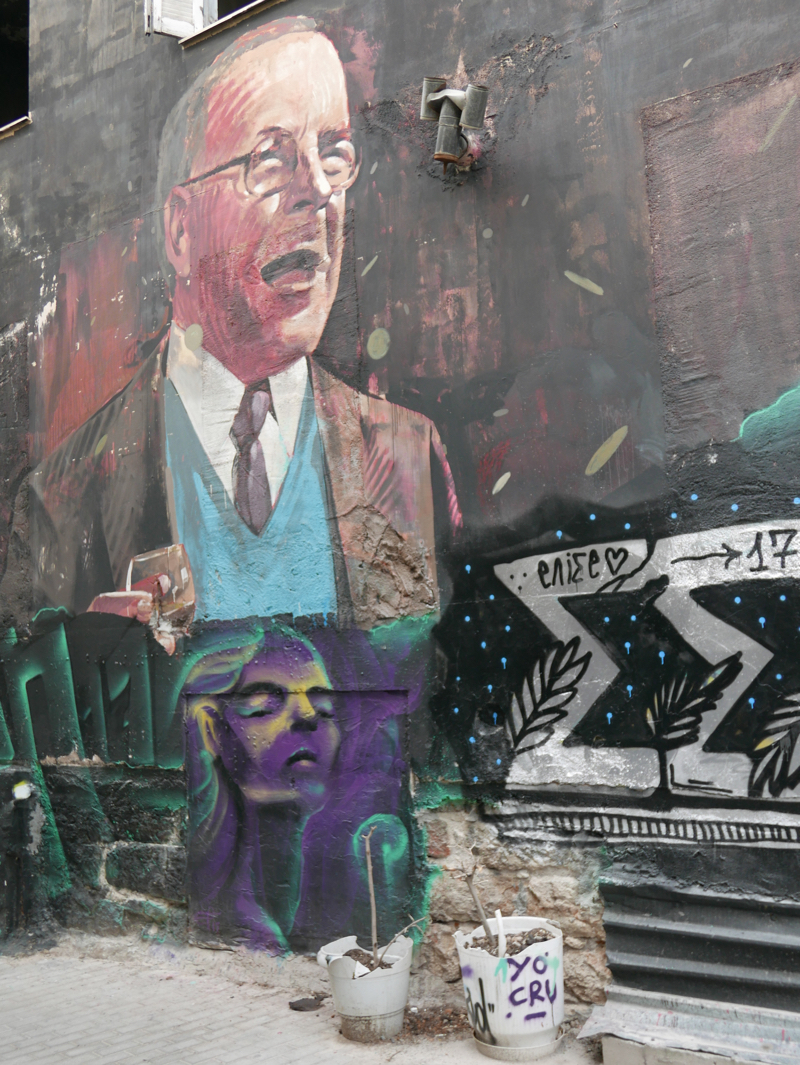 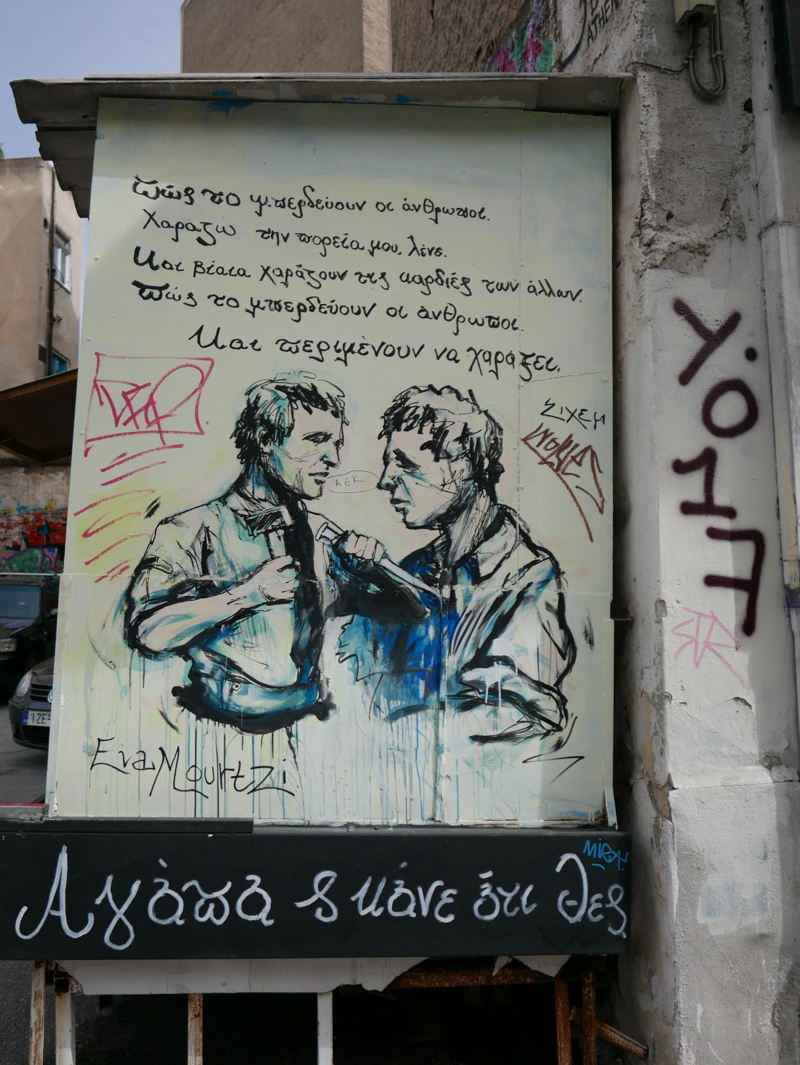 Art that provokes, does not support violence and promotes love

WD (Wild Draw­ing) creates organic murals that often melt into the surroundings as if they were just another reality inserted into the streets of Bali, Berlin, France, Malta, Sweden and much of it around Greece. Born in Bali, pocketing degrees in Fine Arts and in Applied Arts along the way WD started off as a street artist in 2000 and currently is based in Athens. Some of his murals are colourful like the female character we saw in the Psiri district, while others are more elaborate black and white strokes based gigs. Eyes, owls, masks and some mythical characters are WD’s frequent subjects. You can watch some videos of his creative process on WD street art website.

Cacao Rocks aka IASON (Jasone), who often uses a specific bright shade of blue and political motives in his art, provokes with a slogan “This is a great hipster Instagram opportunity” just around the corner from perhaps the most visited street art alley in town – Riga Palamidou in Psiri.

Collaborative works are common in Athens. Carpe Diem collective and TXC group are one of the strongest ones.

Perhaps because of the inherent vulnerability of graffiti “female artists were always around but less in number“, says Nikos. Street creativity blossoms in rough areas and these are usually even more dangerous for women than most young male artists. Still, there are some artists from the delicate gender such as Simoni involved in the Greek street art in Athens. As I witnessed in Buenos Aires, in Greece the legality of street art has also a fine line: “Police is most of the times stopping artists to paint in public spaces. They become just viewers only when there is a permission.” Yet, Nikos adds: “There are areas which are already painted too much and the public won’t be bothered to have just one more painting, like Exarchia, Psiri and Exarchia.“ 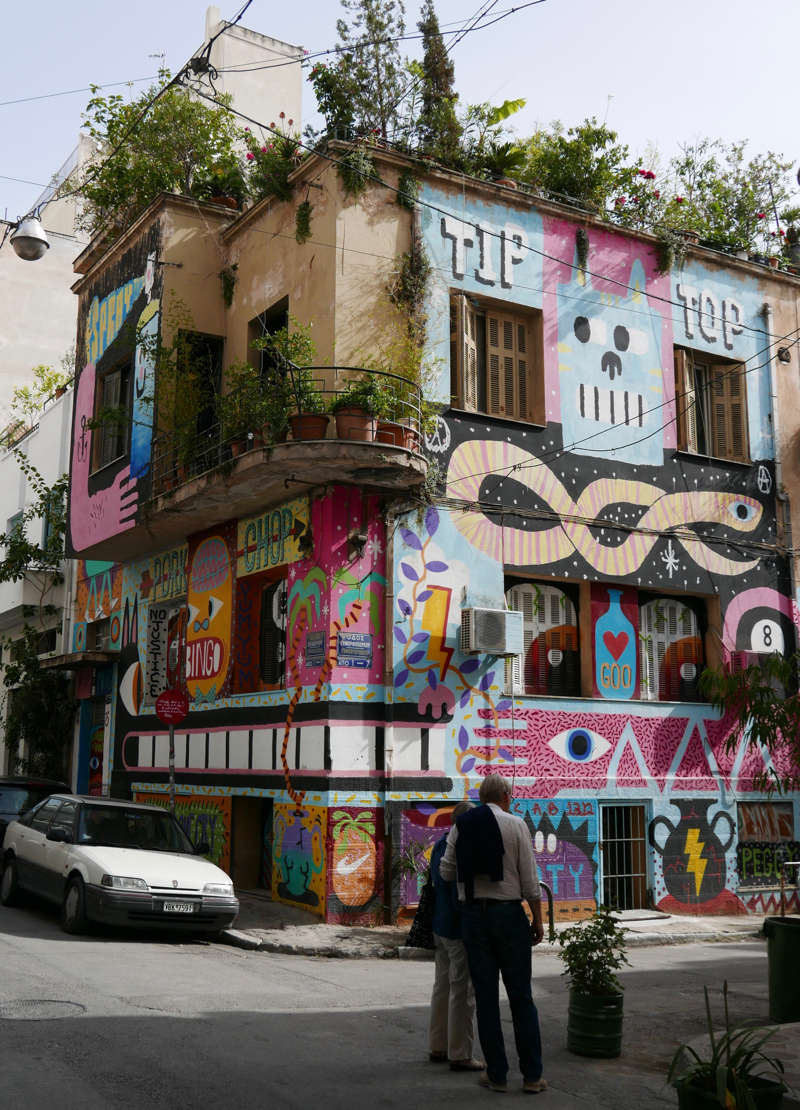 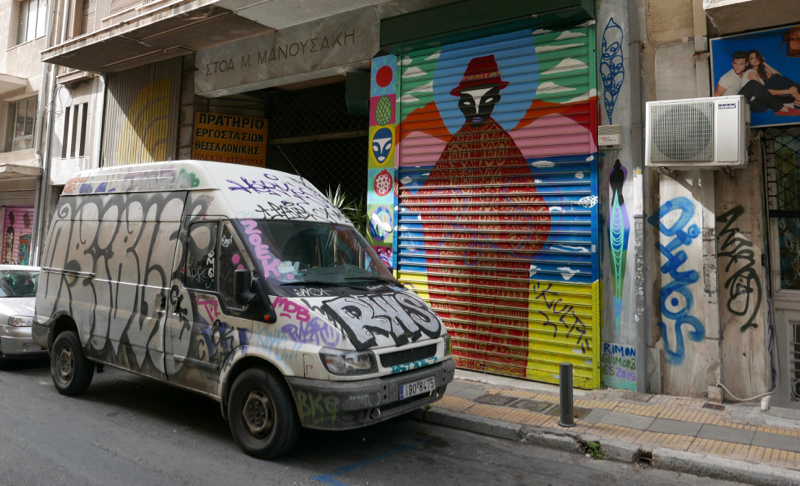 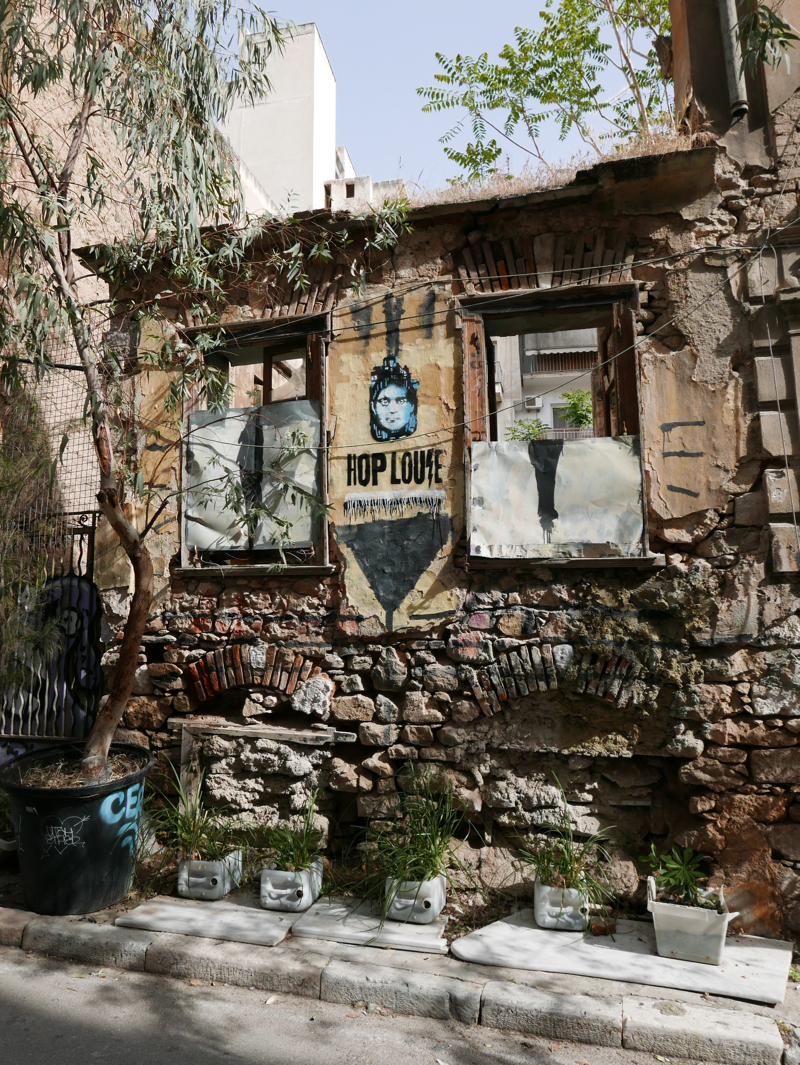 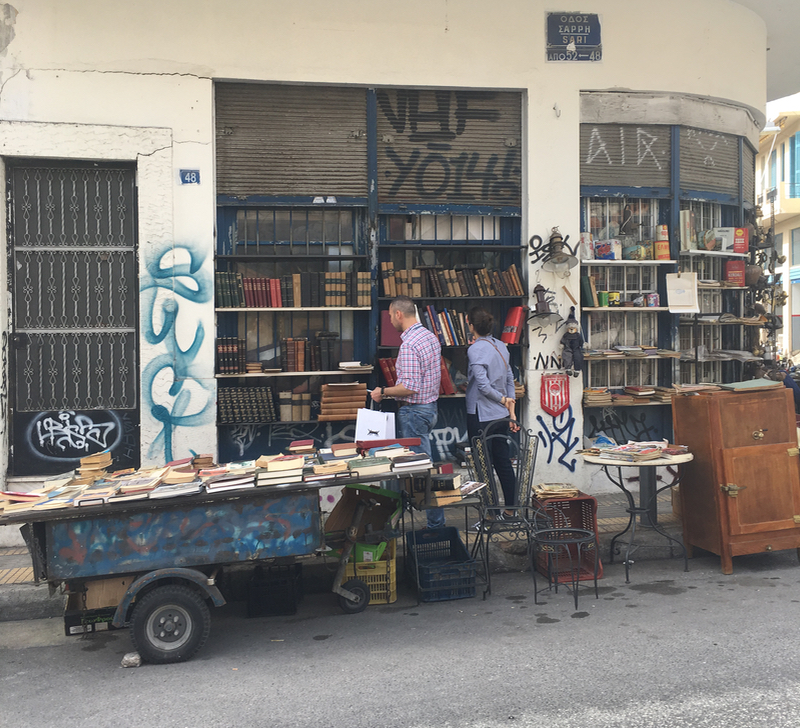 Like everywhere else the ephemeral nature of street art allows for a constant supply of fresh ideas, but the negative side is that what you see during one tour may not be there on your next viewing. The fragility of the art freely shared on the street walls makes traveling more exciting though. With an increasingly similar world, street art is the most free expression of the contemporary, often mostly local emotions. I toured the street art in Athens while visiting Documenta, the contemporary art show that for the first time in its history has moved outside its home in Kasel, Germany, and must admit that I enjoyed the local creativity more on the streets than inside the city galleries and lofty exhibition spaces.

NOTE: There is plenty of misinformation or incomplete description online about the street art in Athens. I caught even the usually meticulous British Guardian paper being too hazy (and lazy) in their reporting. Nevertheless, I found this post by Widewalls very informative and enriching my content with some older examples of street art in Athens. There is also Facebook page titled Graffiti in Athens with regularly updated content, but for the best experience you must walk it and see it yourself live in Athens. I did not receive any benefits or payment from Alternative Athens, I paid for the tour and can highly recommend using them to anyone visiting the Greek capital.