Ernst Loosen is ‘the king of German Riesling’. The well-known German wine producer won multiple awards that seal his persevering efforts to improve the image of German Riesling globally. Decanter, the leading British wine magazine rewarded Ernst Loosen’s efforts in 2005 when he was named the “Man of the Year”. In the US, Wine & Spirits added him to “The World’s 50 Most Influential Winemakers” in 2004. In his native Germany the Weinguide Deutschland awarded Dr Loosen the “Winemaker of the Year in 2001”. 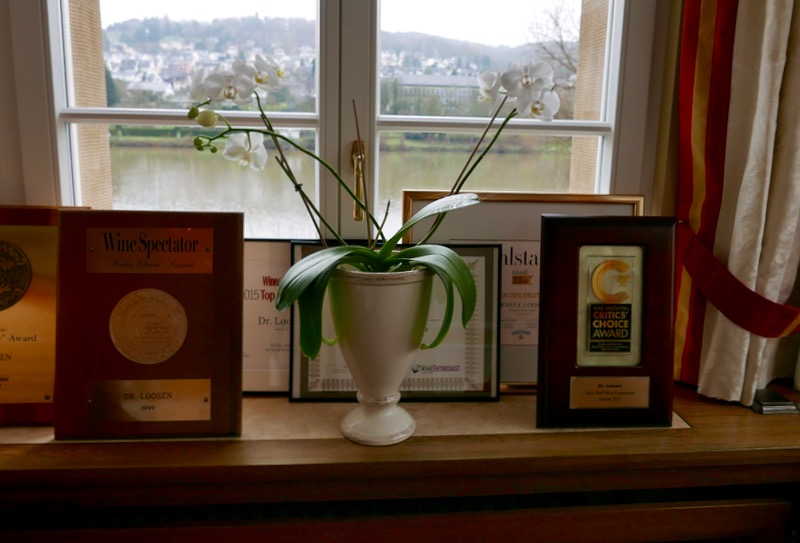 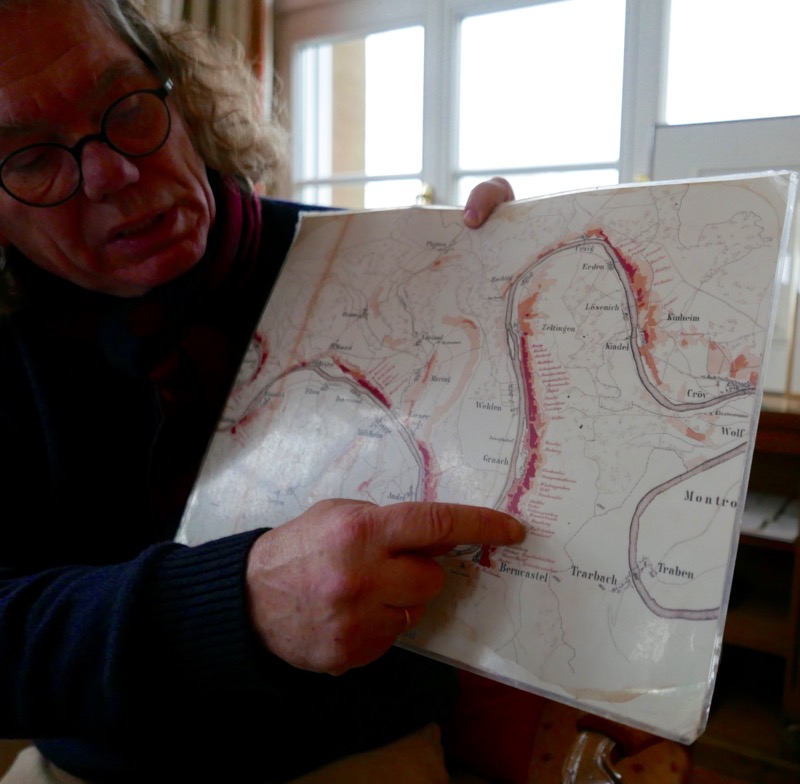 Plenty of honours proved his fitness as our guide through the most important German terroirs at a lecture in London (2012). Ernst Loosen explained with accompanying liquid samples the diversity of soils in some of the most significant wine regions in Germany and their influence on Riesling. Alerting us that “Terroir is not only soil”, pointing at the common misconception of most of the theory-skipping wine drinkers. To demonstrate how the annual weather fluctuations, winemaking techniques as well as the location of the vineyard (exposure to the sun, proximity to the water, geography, altitude, etc.) affect the vines and wine made from them, he brought his wines from different vintages, regions and also some bottles from his cousin Robert Weil. 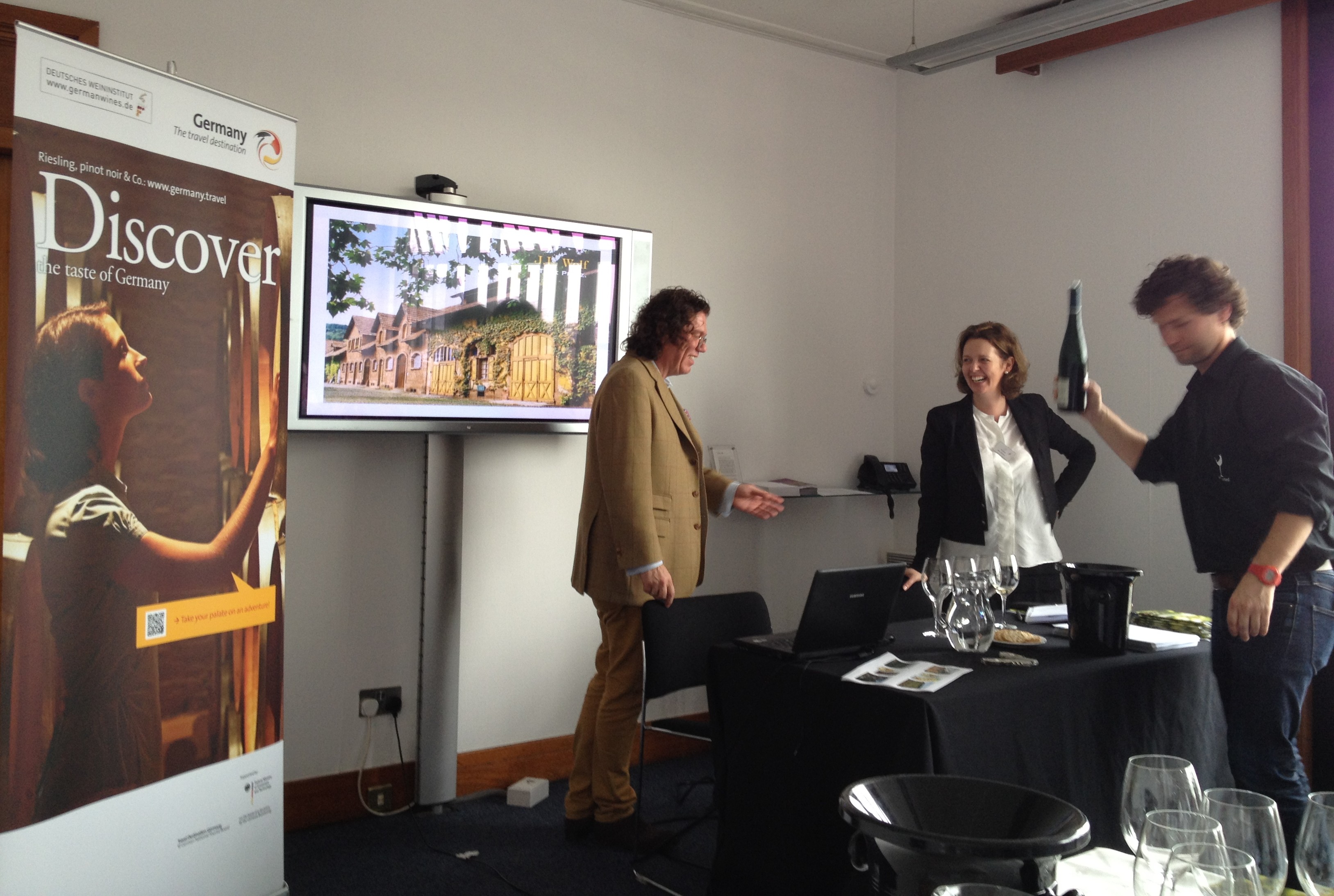 My second encounter with Ernst Loosen was this past fall at his estate in the Mosel, Germany. If you ever wander over, fly to Luxembourg as it is slightly closer than the busy Frankfurt airport. The infamous bridge made the travel to Frankfurt faster, but still it is better to fly from its EU neighbour.
On a damp, late fall afternoon after a hearty lunch at a local castle overlooking the mighty Mosel river valley, I visited Dr Loosen at his centuries old family house. His dog welcomed us with rattling tail, well behaved he spared us any jolly barks, just patiently waiting for his master before nesting comfortably on his master’s chair during our wine tasting. Antique furniture decorated the hall and the guest room where the winemaker hosts tastings personally. We were lucky, the globetrotting Riesling promoter, was at his home to share his characteristic humour and the stories from the worldly encounters. Connecting the theory from the workshop a couple years ago in London with the visual queues of the Mosel, my palate was illuminated further. The most prominent vineyards tail the Dr Loosen winery from the river up to the steep slopes of the rising Mosel valley. 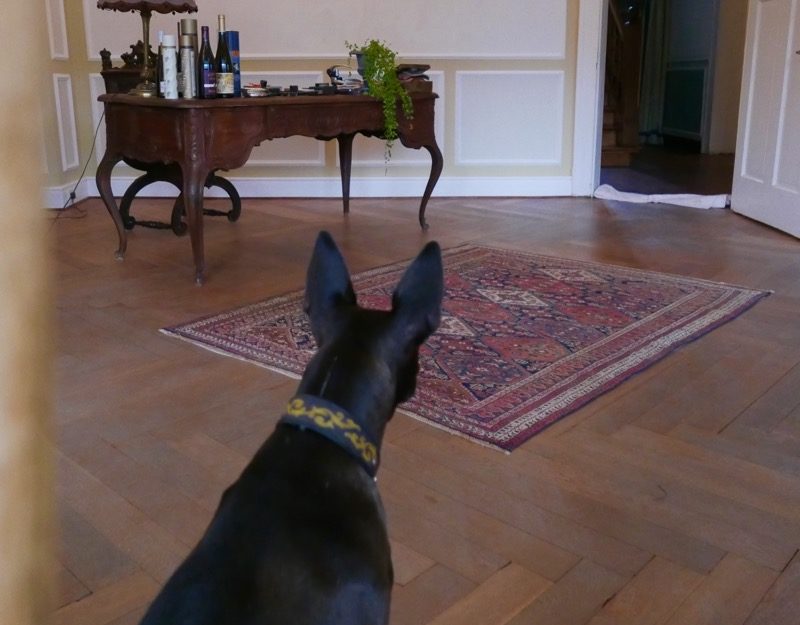 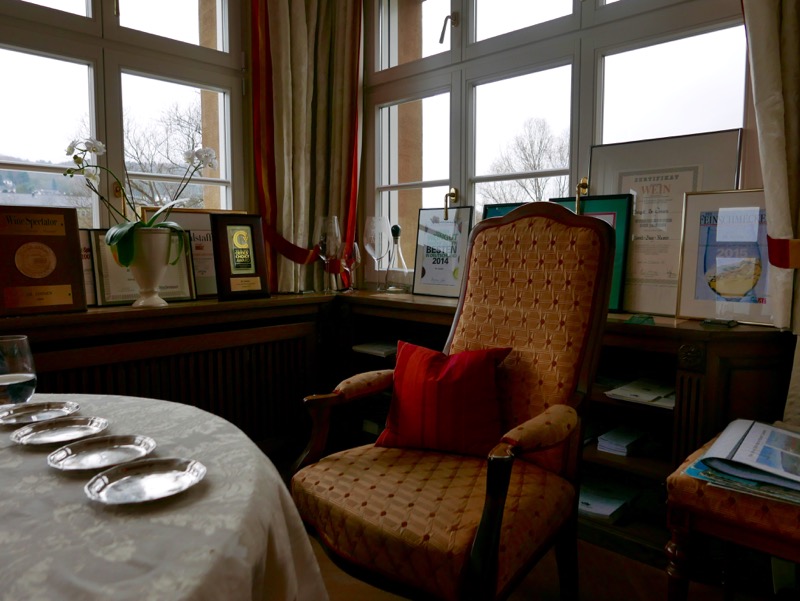 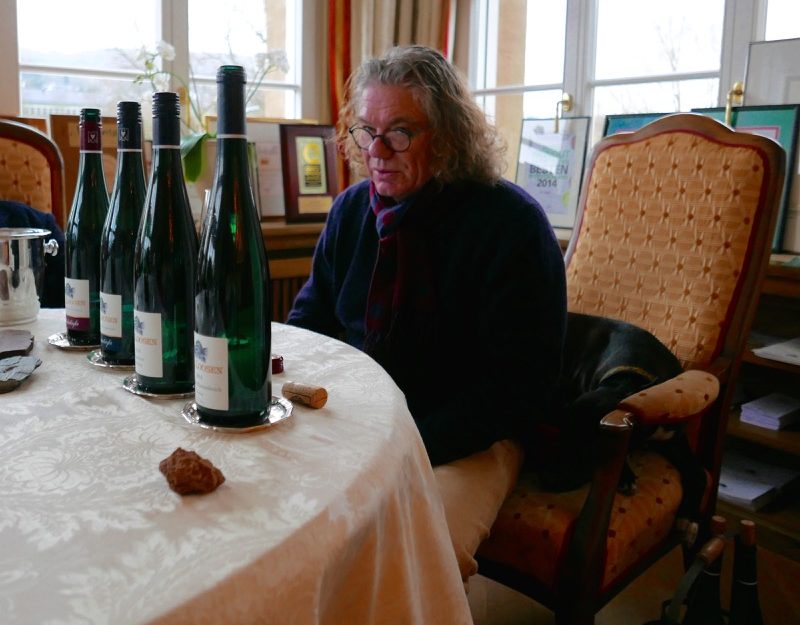 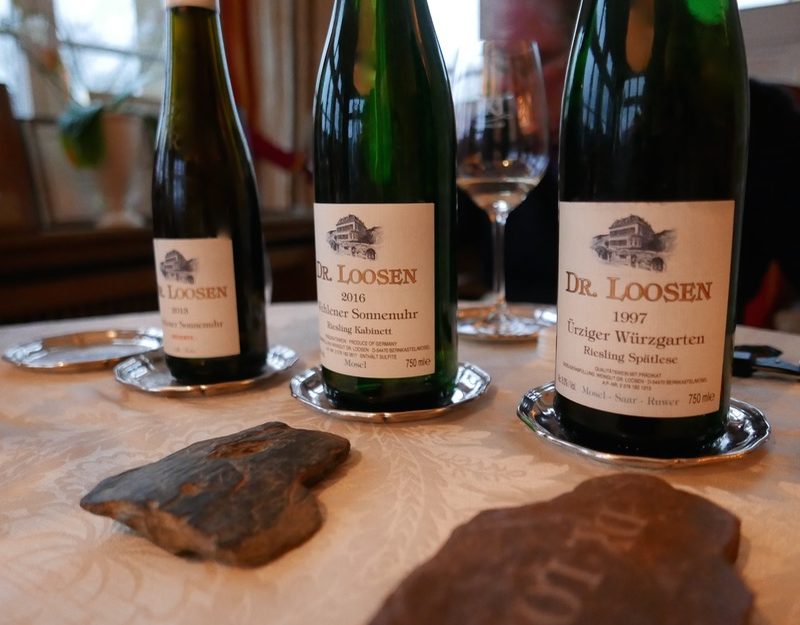 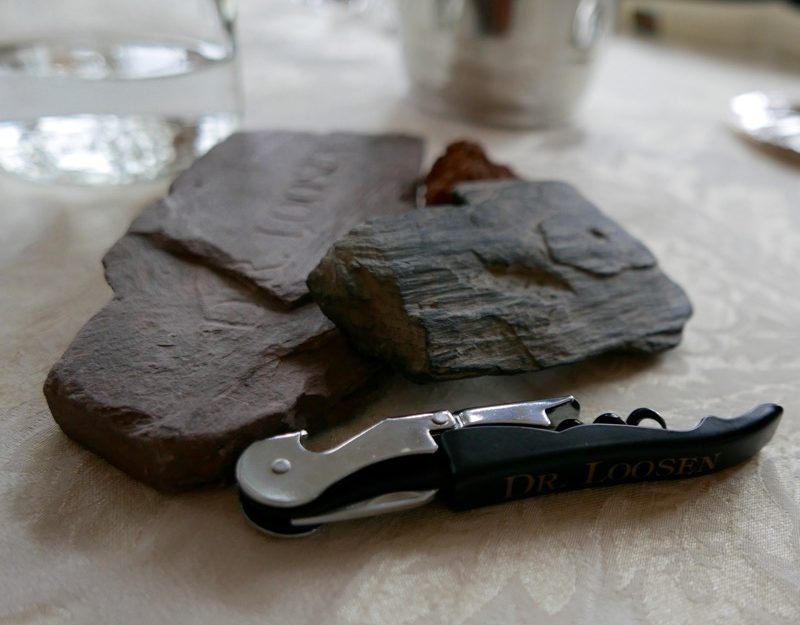 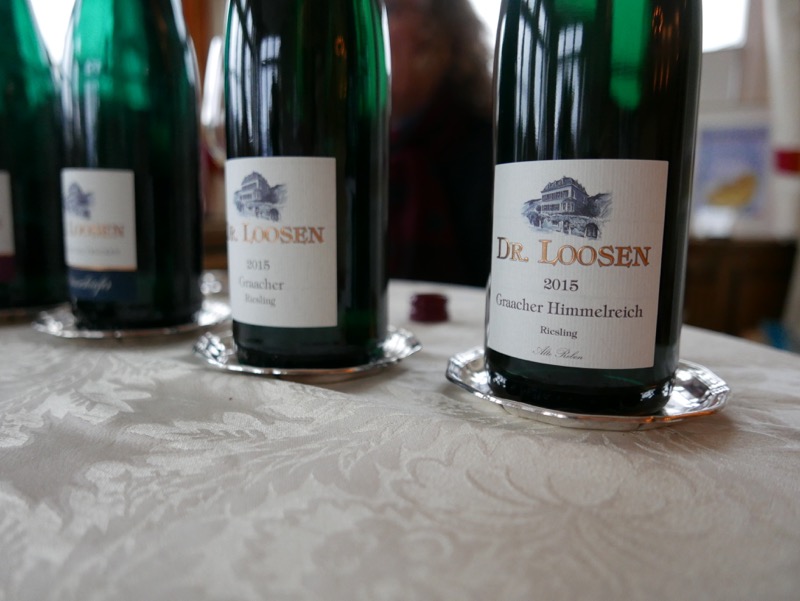 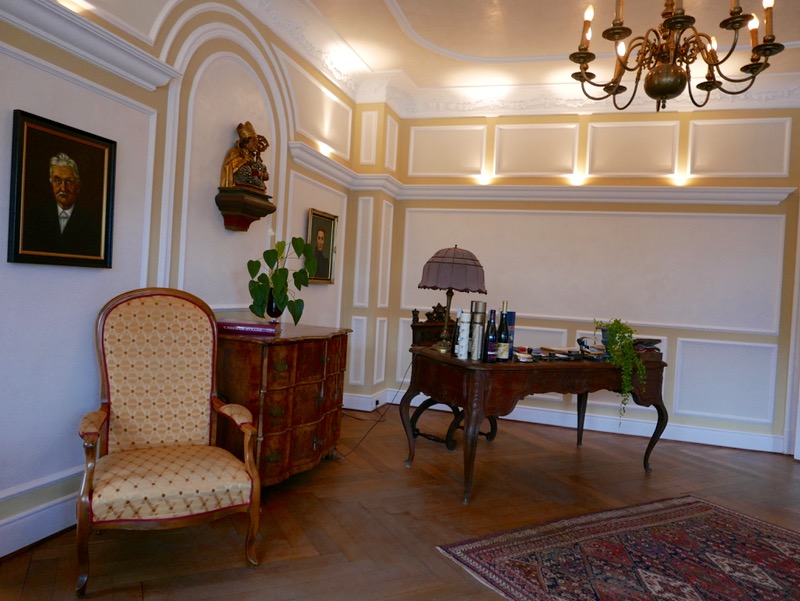 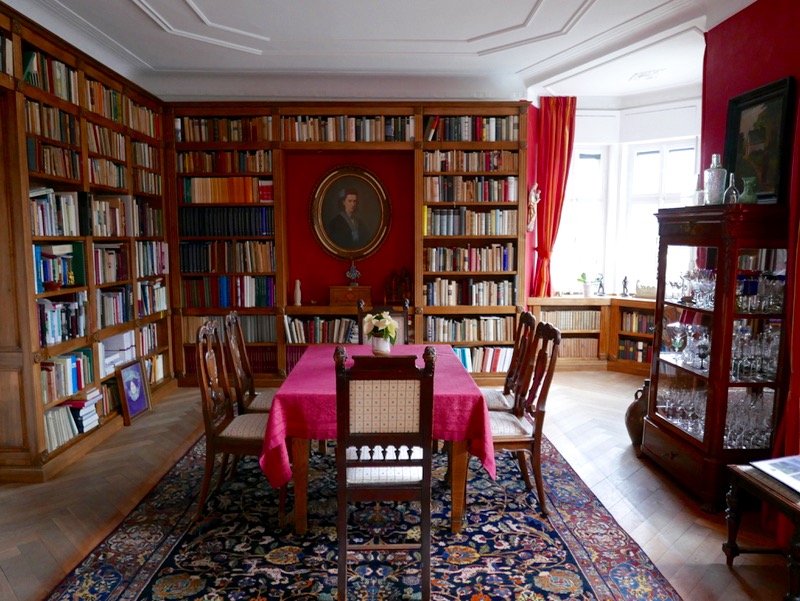 Middle Mosel
Dr Loosen’s estates are located in the midst of the Mosel river valley. We tried his wines from two types of soil found there:

The Mosel region has no danger of being struck with phylloxera. The soil is well-drained, steep, and its South-facing slopes in the proximity to the Mosel river protect the vines from cold nights because of the day heat is being held by the river’s water. The roots of the vines have to go deep into the soil to get what they need (water, nutrients) so the wines achieve excellent complexity.
Wehlener Sonnenuhr Riesling Trocken, 2010: Just after the opening it shows an austere nose which is balanced slightly with a pleasant fragrance of peach. The palate is more rewarding with a strong backbone and high acidity, citrus and peach ending with a long aftertaste.
Wehlener Sonnenuhr Riesling Spätlese 2001: This late harvest Riesling was the youngest of the three Spätlese (late harvest) we have tasted, yet most of us would think it was the oldest one. Smelling it one wants eat it as it had aromas resembling a vanilla cake and eggnog. It is delicate and rich with exotic fruits, cream and cake taste.
Wehlener Sonnenuhr Riesling Spätlese 1991: Less showy on the nose, yet still some cake and touch of mushrooms. Delicate, concentrated, but more fresh resembling a light yellow fruit marmalade.
Wehlener Sonnenuhr Riesling Spätlese 1983: The lightest in colour from the London samples, but also tasting like the freshest one! After more than three decades in the bottle, a well-integrated wine with fresh breeze and button mushrooms on the nose. On the palate it shows more minerality and again vanilla, butter scotch and exotic yellow fruits. At just 8% of alcohol it is surprising how well this wine matures, proving that acidity and just right phenolic ripeness rule the ageing potential. Ernst Loosen recommends it with game.
After tasting these three wines vertically, I thought that this Riesling ages in reverse – into its youth!

Pechstein vineyard – Loosen acquired it in 1996.

Weingut Robert Weil – Grafenberg (Erstes Gewachs)
Weil is a a cousin of Ernst Loosen, known also as a great wine producer in Germany.

Kiedrich Grafenberger Riesling trocken 2010 Erstes Gewachs: Full, mineral nose with floral and ripe fruit adding to complexity. Spices, exotic fruits (litchi, yellow mango) and high acidity (8.5 g/l) balancing the higher sugar level (11 g/l) bring the wine into harmony. Long finish assures a lasting pleasure from this complex Riesling.
Although, he is a grand fan of Burgundy, Ernst Loosen does not practice biodynamic or organic farming and winemaking, because of the challenges of the local climate he believes that for the wines to be great in the Mosel, a little help from chemistry is needed.
He was guided by the Prussian government’s 1868 vineyard classification map when he was deciding what to do with the vineyards he inherited almost three decades ago. Hence, learning from history can bring once famous wine star back to the stage re-gaining its Grand Cru classification. Read more about the global journey of Riesling in my previous post.