The British chef received three Michelin stars at the Fat Duck for his innovative - science and culinary history combining - approach to cooking. Now you can taste some of his most famous inventions at the London's Dinner.

Dinner by Heston Blumenthal is an elegant, but not uptight gastronomic restaurant in London adopting a more simple style of the millennial casual culinary entertainment. Here, at the luxurious Mandarin Oriental hotel, his contemporary British food is a remake of centuries old traditions that the science-bound chef helped to resuscitate to an international acclaim. On my three visits, Asian diners assumed substantial table allotments in the vast dining room. 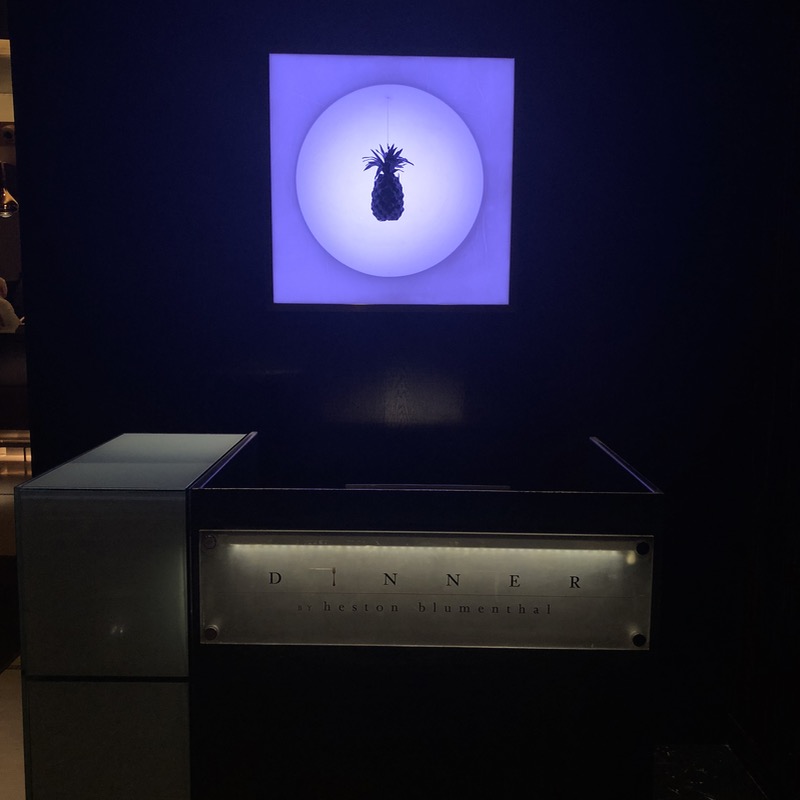 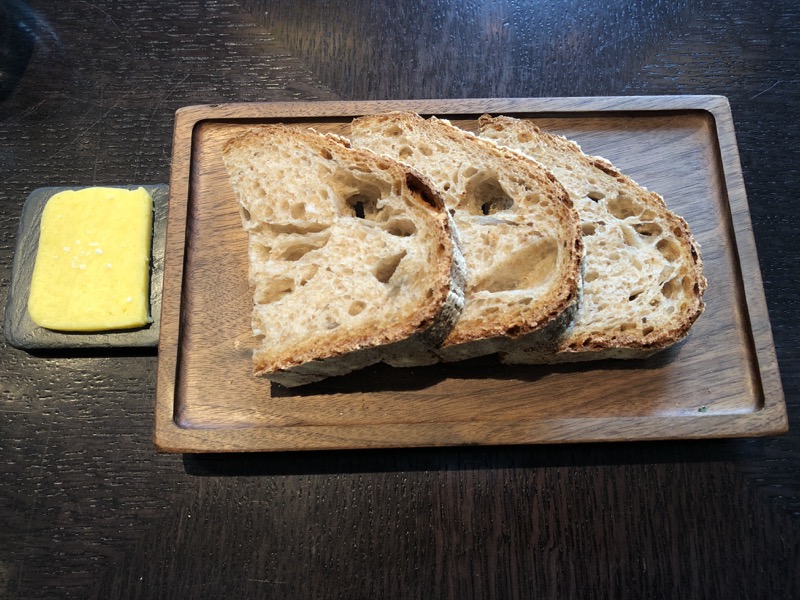 Wonder sparks from some plates, while others were simply updated for contemporary tastes.
Heston Blumenthal is celebrated almost as much as the Queen and David Beckham in the United Kingdom, representing the country abroad as an attractive gastronomic destination. Blumenthal’s restaurant Fat Duck in Bray, about an hour drive from London won multiple awards including The Best Restaurant in the UK and crawled high up on The Best Restaurant in the World ladder. The British chef received three Michelin stars at the Fat Duck for his innovative – science and culinary history combining – approach to cooking. Now you can taste some of his most famous inventions at the London’s Dinner. 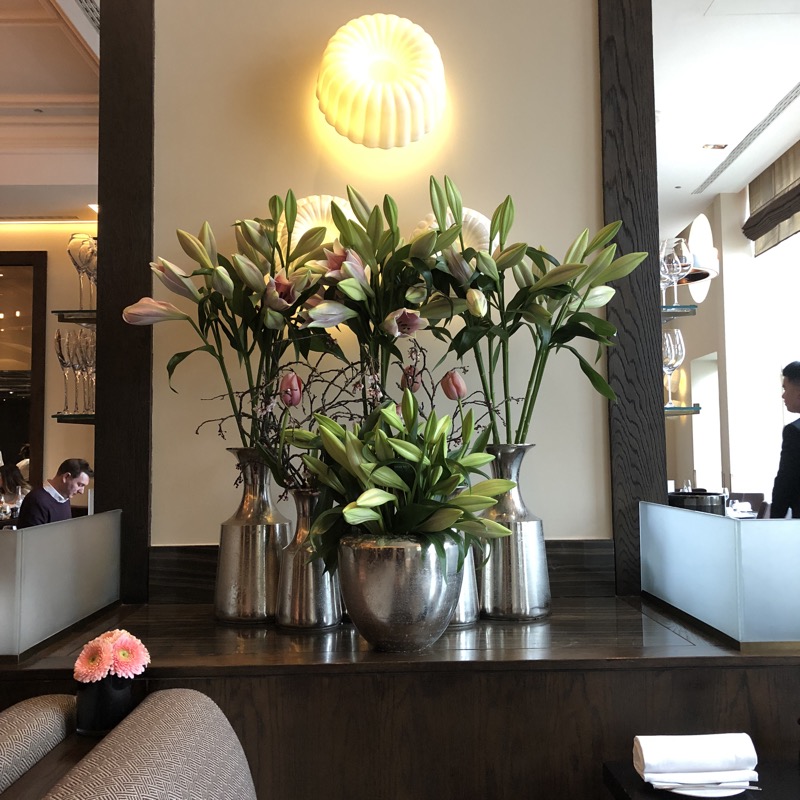 Set in Knightsbridge, the Dinner by Heston Blumenthal buzzes with business talk during the week. Dressing appropriately is highly advised. The dining space feels open and the tables are distant enough allowing for private talk. Still, unless you dine at the chef’s table or at the 10-people-seating private room, you will be exposed to the sights of others. The concept of an open kitchen entertains as much as connects you with your meal. 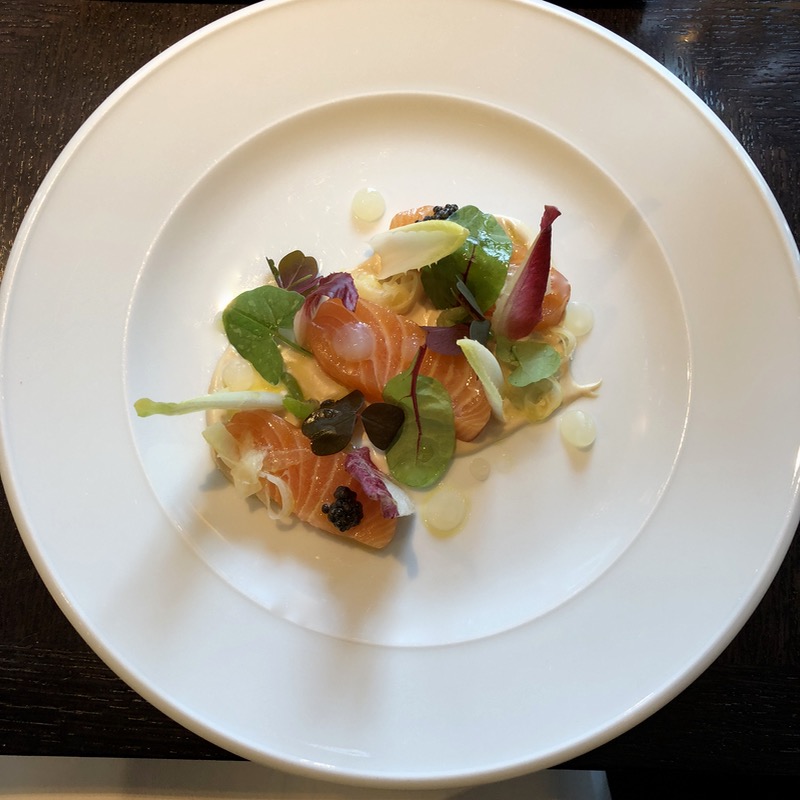 Some of the plates that were co-designed by the master of British molecular cuisine, Heston Blumenthal himself, are quirky, rich and interesting. Some of his dishes like the Meat Fruit Mandarin, chicken liver parfait & grilled bread will surprise you (always on the menu), others like the Lobster & Cucumber Soup will enchant with a complex roller coaster of fast changing flavours. The House smoked salmon starter was abundant with rich sauce, the fatty fish was sliced like a thick sahimi, a dollop of caviar for luxurious touch and seasonal leaves to freshen the load a bit. 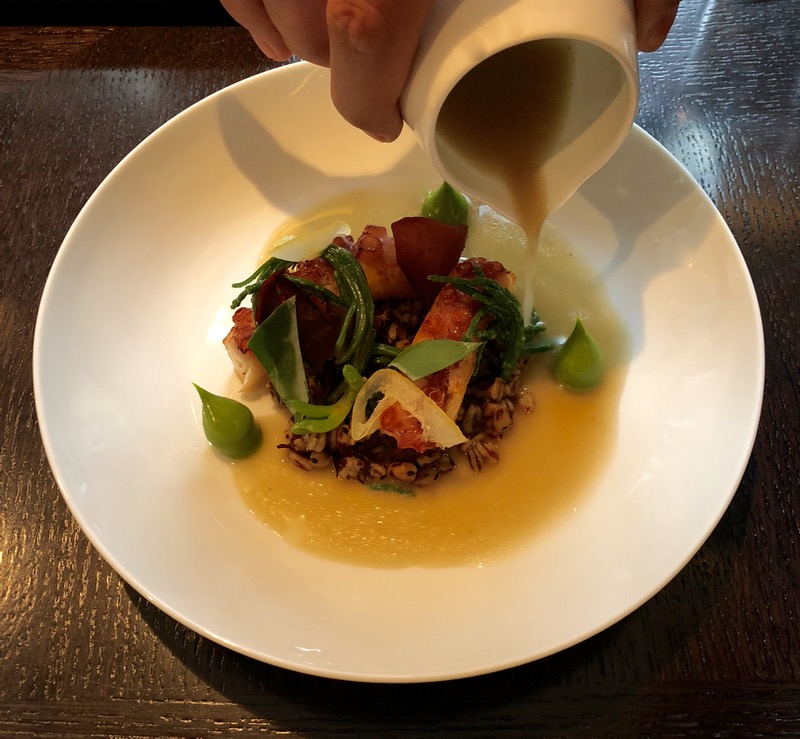 On the special travel-back-in-time menu, the history behind each recipe feeds your curiosity. An approximate year of the dishe’s birth transforms you into the distant gastronomic past.
The Cod in Cider with Chard & fired mussels looked like a marriage of tradition and modernity. The fish was perfectly prepared – delicate, its flakes softly fell apart into the rich cider sauce. Mixed with the mussels this drunken sea of flavours, the plate was quite simple and satisfying. Was it the most interesting fish dish I had recently? I am spoiled, living by the Mediterranean sea and travel constantly, so I got to eat better fish. Despite the harsh competition in the London restaurant world though, Blumenthal succeeded in making innovative and interesting meals. The food at Roganic by Simon Rogan (formerly at Claridges’ Fera ) is better, but not an ideal setup for a business meal. 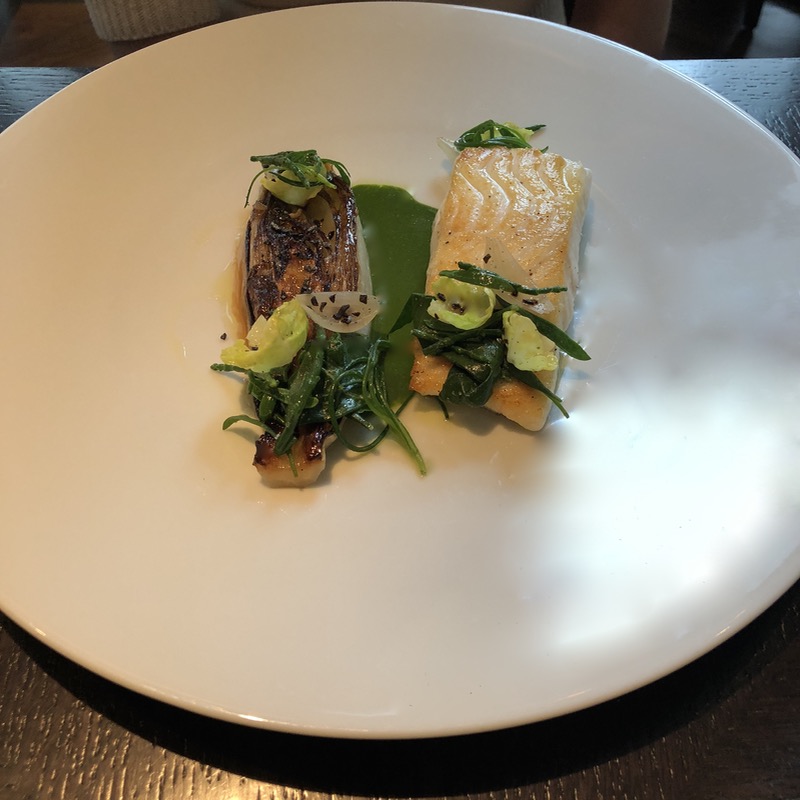 I was disappointed by the dessert once. Dipping my spoon into the Chocolate Bar with Passion fruit jam & ginger ice cream the mash up was overwhelming, far from balanced. In the tiny layers of chocolate millefeuille a filling of a passionfruit hard jelly and ice cream dollops with ginger ice cream served on the side just did not woe our taste buds. The chef’s addition of a small cup of chocolate mousse with a crispy biscuit served afterwards made up for it, sublime! In summer, the Rhubarb dessert was in another league. The quality of the very English sweet and tart stem was extraordinary. The British cheese plate served with house crackers did not offer much of a choice but was good enough to please. 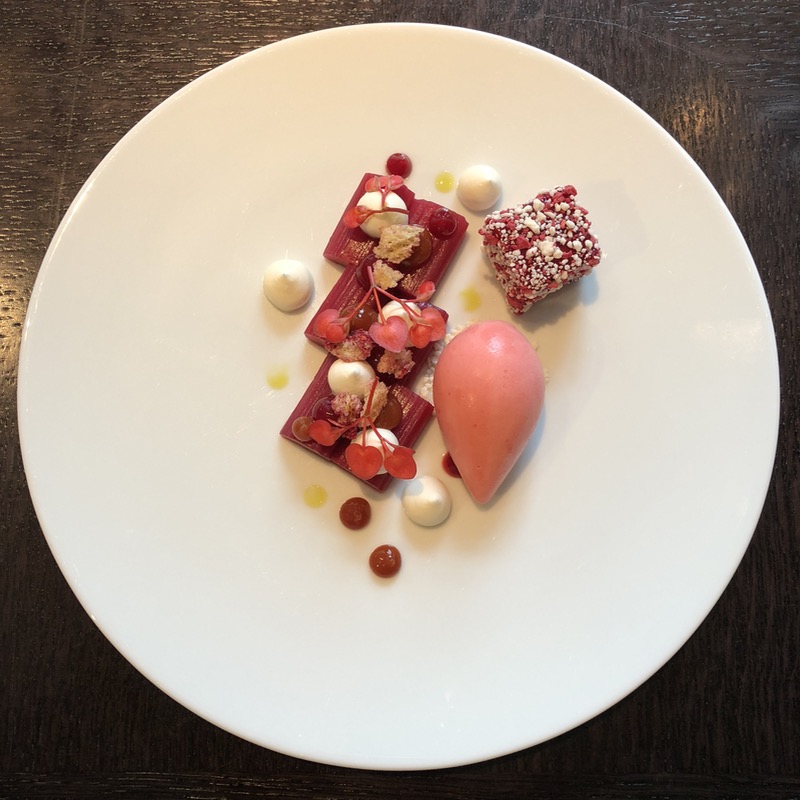 The rare tea selection at Dinner by Heston Blumenthal is very special and hard to find at any Western restaurant. I ordered a cup of loose lemongrass and ginger infusion to soothe my sore throat, but I was tempted to get the £25 per pot 1970s Raw Pu-er from China. The price may seem high for tea, yet one pays almost as much for a glass of great wine in London, so why not to splurge on vintage tea! 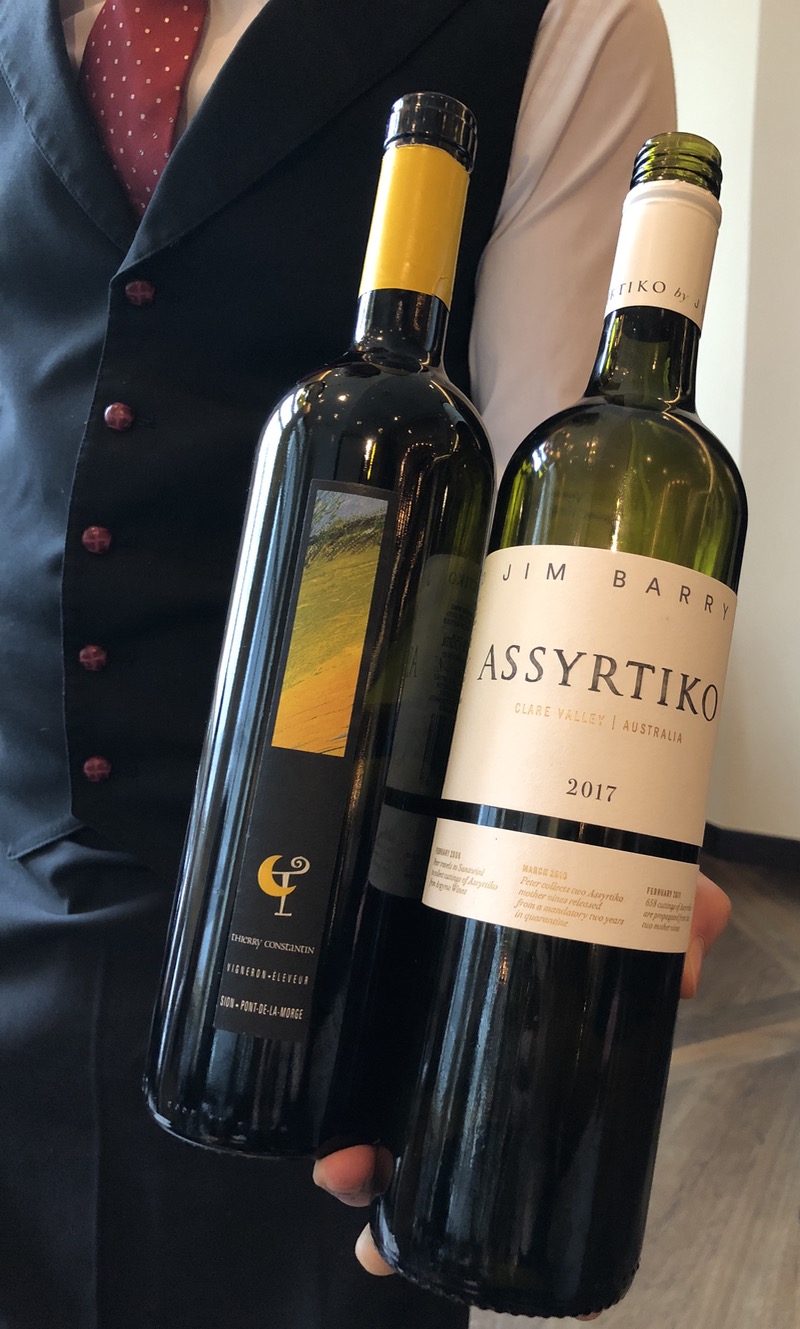 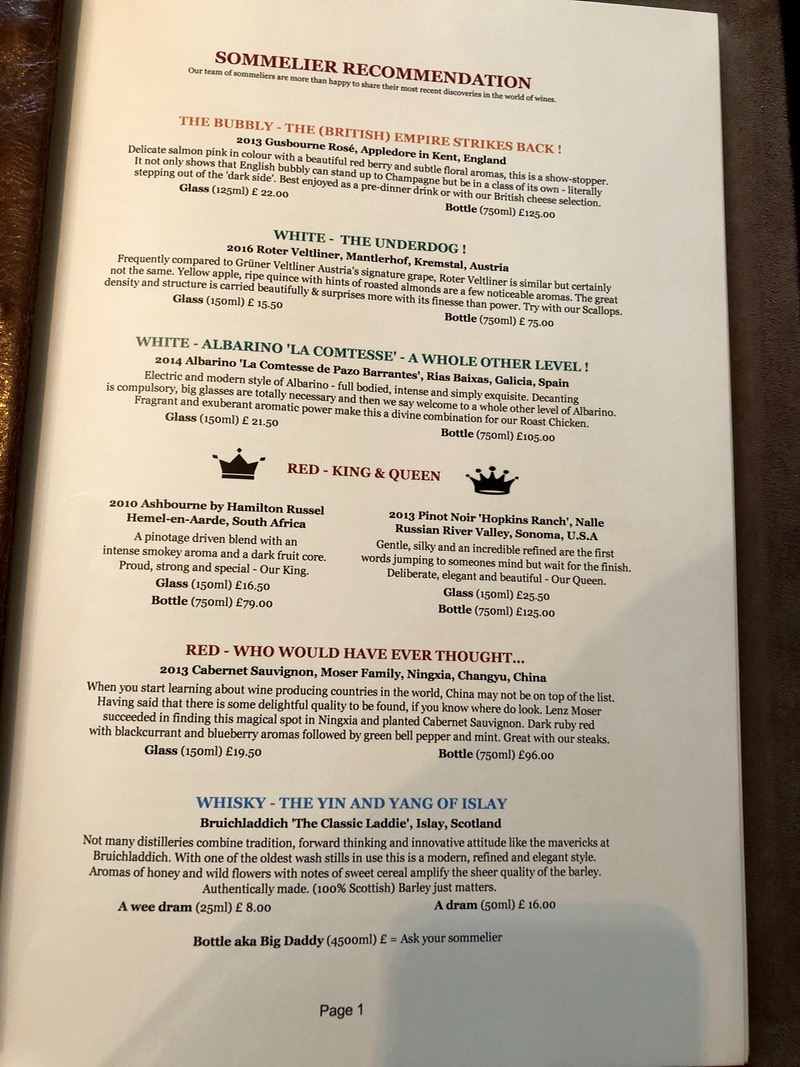 The wines served by the glass are interesting, although all the reds were in the heavier realm, quite a challenge to choose a glass of red to match our light fish main course. We settled on a Pinot Noir from Nuits St. Georges, delicious, but one of the heavier Burgundies. The wine list is otherwise worldly, with the award winning English sparkling wine, the Nyetimber, featured as a great and cheaper alternative to the big name Champagnes.
Cuisine: Gastronomic British based on traditional recipes and the so called “molecular cuisine”
Visits: September 2012 , summer 2018, April 2019
Price: High (a three course dinner with drinks including a glass of wine about £80 or €100 – mains a la carte around £30)
+44 02072013833
Mon-Sun: Lunch 12noon – 2:30pm; Dinner 6:30 – 10:30pm
Mandarin Oriental Hydepark, 66 Knightsbridge, London, SW1 X 7 LA