That Italians erupt with passion, mastered style and are proud of their traditional food is a well-worn truth, but that they infuse their wines with the enviable attitude of ‘la dolce vita’ infuses more joy with imbibing socially. A meal cannot go without sharing a bottle of vino di tavola. At least within the older generations, for times have changed even in the proud Italy. Debating with Italian winemakers, I learned that wine drinkers are now endangered species there. I have noticed myself that most of my Italian friends in London rather sip on a cocktail or beer than a glass of wine.

The traditional craft of Italian hands

The winemakers nevertheless strive to improve their wines. Natural, unfiltered, without added sulphur, no pesticides, herbicides and fungicides in the vineyard, has become a widespread culture in the Slow Food nation. The Italian fashion-embracing style is recognised across the world as are their spaghetti. They get creative not only with the labels [the fashion maven Roberto Cavalli crafted a stunning bottle design for his brother’s estate in Tuscany], but also with their brochures. Fingerprints, drawings by friends and family members, even poems elevate the artistic soul of the wine brand.

I was further recently reassured at a wine tasting event Passione Vino held in London’s St. James that the lively sweet live energy still sparks from the Italians working the land. The winemakers there often engaged in an all-expressing discourse, a blend of musical Italian speech with an amicable body language, that I was seduced to skip my afternoon psychology lecture to longer enjoy savouring their operas in glasses full of their liquid passion instead. 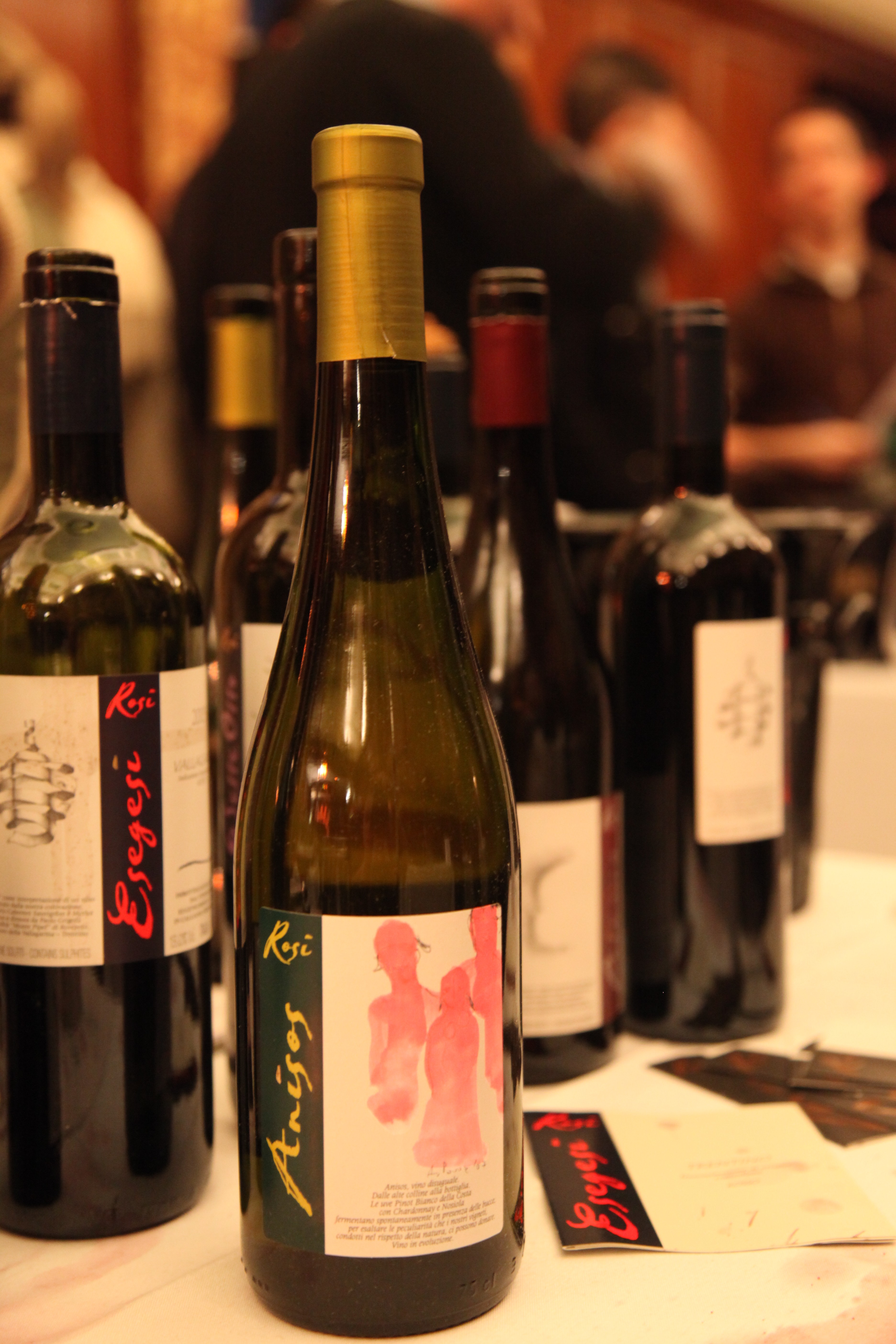 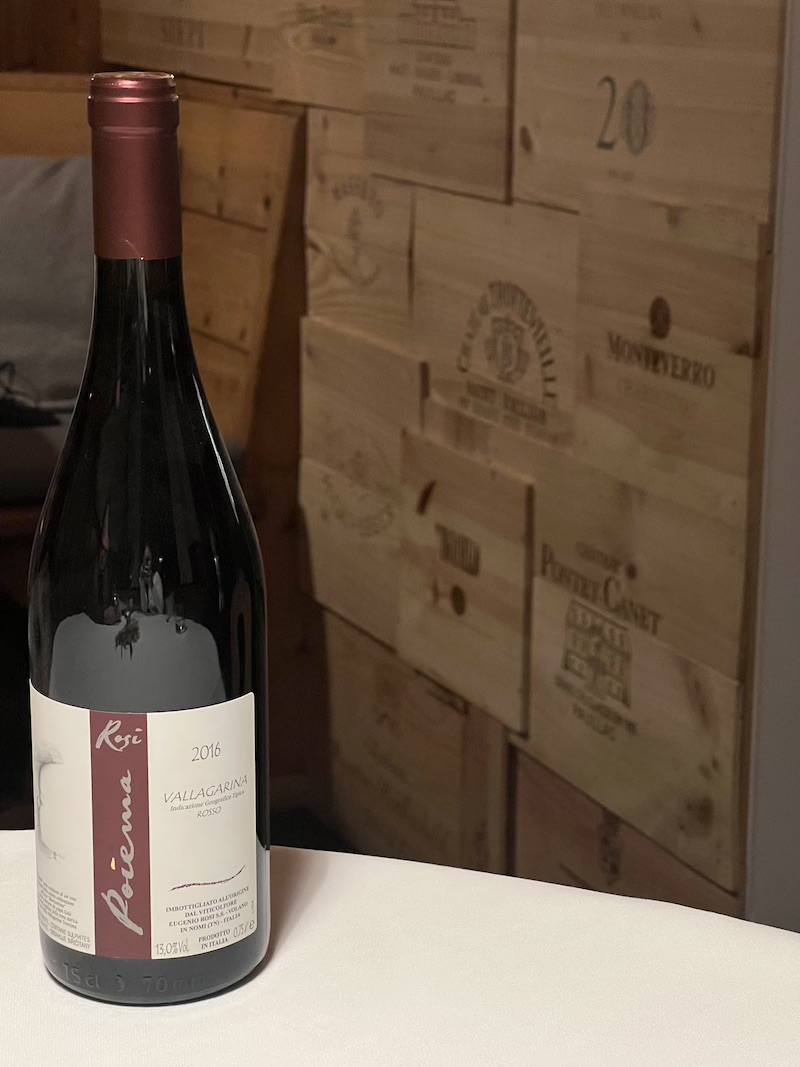 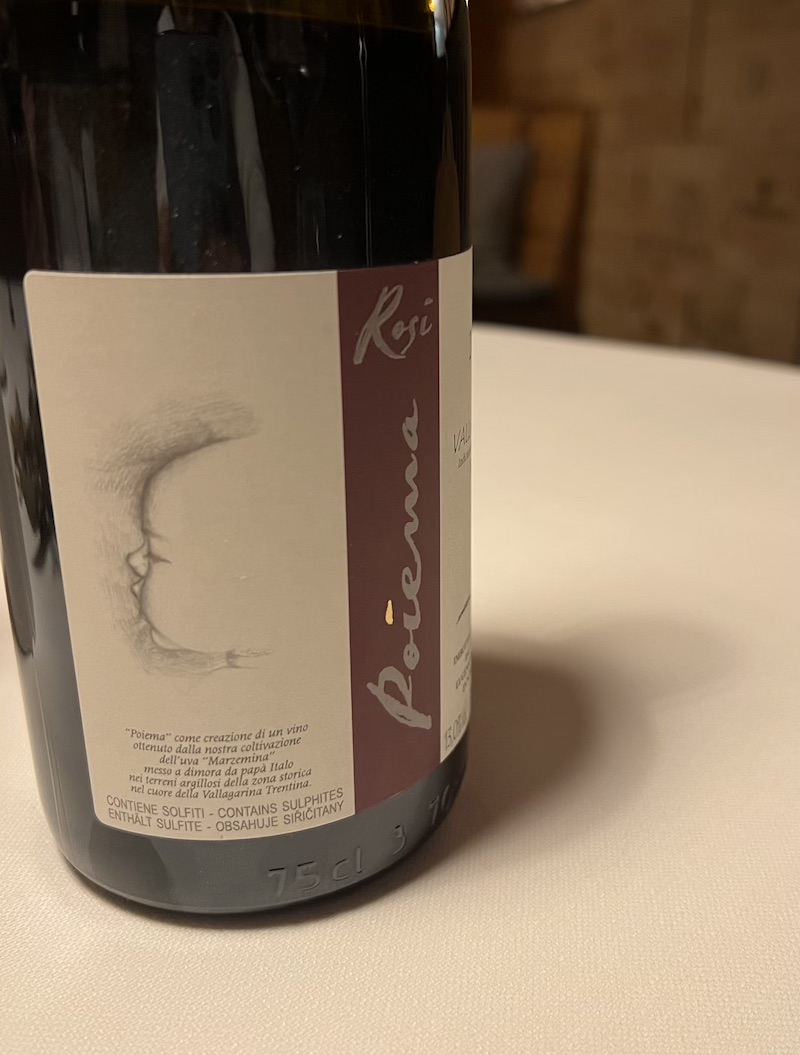 I admired drawings of the wife of Eugenio Rosi on his wines’ labels and leaflets. He and his wife Tamara live by and breathe wine and you can taste it. The wine of the day was his white “Anisos” Vallagarina IGT, 2007. An organic blend of Pinot Bianco, Chardonnay and Nossiola (a local variety reminding the more known Ribolla). I found myself on a short trip to Burgundy for a minute as the wine swirled through my mouth. Although not a 100% Chardonnay as the Burgundies, delightful creaminess and dried fruits came through in this wine. Hay and straw nose made me wonder who is the main culprit in this masterpiece. Is it the Chardonnay or the mysterious Nossiola? Perhaps the oak casks were imported from Burgundy? The winemaker shares the secret on his website, but before tasting I prefer not to know and wonder. I would rather pay a visit to Volano in the Northern Italian Trentino region where Rosi has vineyards. I also recommend another indigenous bottling by Eugenio Rosi Poema Vallagarina rosso that captured my palate. This bright red beauty ages gracefully, keeping its freshness well over five years.

There also are many mass producers in Italy these days and this sometimes cost for example Amarone its reputation. The Amarones have changed their style dramatically. Today we drink them sweet, and high in alcohol, sometimes too much. Not all producers took the road of popularity-driven winemaking though. There are still some keeping the production small and all their effort and focus go into each bottle they produce, piece by piece. Some like to experiment and trust their taste buds, while others take their wine drinking philosophically. Dott. Umberto Ceratti likes his Amarone sweet, lower in alcohol, bottled in low, flat and round containers. From a recommendation on his web site you get an idea of how much time he has devoted exploring the best way to enjoy it at its best.

Consumption: “alone, in conversation or in meditation or as an aperitif, accompanied by spicy cheese biscuits or hard cheese or fresh fruit after a meal.”

I can imagine meditating with ease after two glasses of this 13% + 3% Vol wine. Perhaps that is why he lets the precise percentage of alcohol in a safe + 3% zone – for some its after effects might be surprising. I tasted one of his ‘Greek White’ wines – the Greco Di Bianco DOC, 2006. It is produced in a ‘passito style’ where grapes are dried like raisins and then fermented. In Calabria the Greco Di Bianco grape gets plenty of sunshine necessary for this sweet wine. The most famous sunshine passito is Passito di Panteleria from the namesake island half way between Sicily and Tunisia. Calabria is South enough and the producer Azienda Agricola Nereide Ceratti exploits its sunny potential fully. Caramelized soft honey and dried exotic fruits transfer you to a hot sandy beach from the cold and cloudy London in a nick of a second, and – it feels really good as it lasts with its long, warming aftertaste. 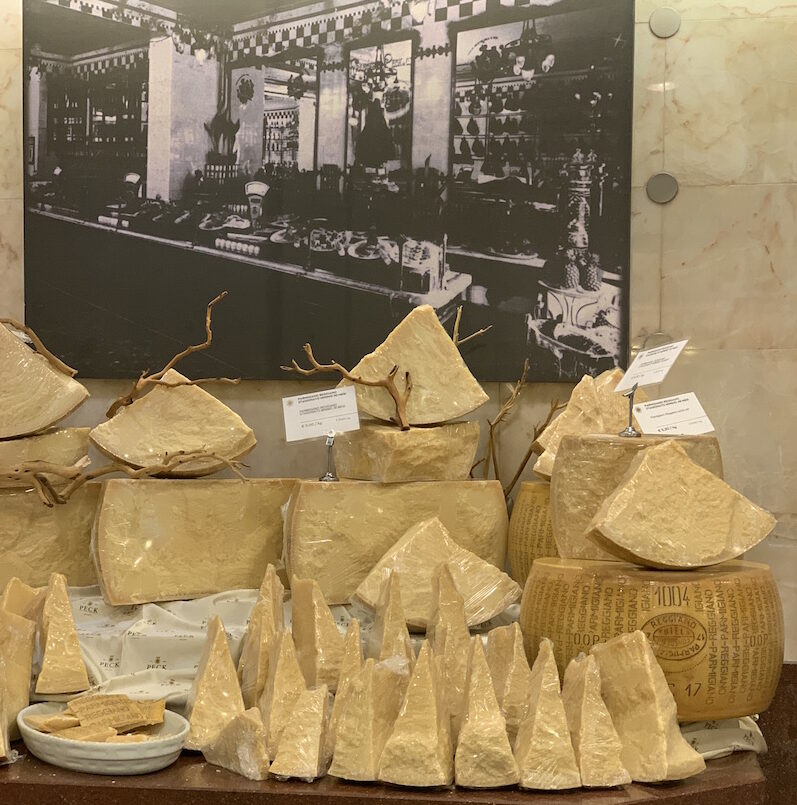 La dolce vita on your palate

The Roman ancestors stirred the passione vino as well as improved their cheese making, so today we can be grateful for their creation of cheese icons. La Credenza, an Italian delicatessen supplier to the UK, won’t disappoint real gourmets with their heavenly truffle pecorino or the intoxicating passito-infused blue cheese or Umbriaco matured in Amarone. You can buy La Credenza’s wide range of Italian Artisan delicacies on this online shop for delivery in and around London. I received no financial incentives for promoting them, they are just so good deserving my praise. Cheers to la dolce vita!

For more information about Italian wines I find this website very useful: gooditalianwine.com