The name of the restaurant came from straw baskets (called Escourtins) used to keep ground olive paste after being crushed by a stone wheel. L’Escourtin restaurant is located in a former olive oil mill near Fayance, in the heart of Provence. Le Moulin de la Camandoule was producing oil until 1946 in its 17th century building, and today it is a small hotel with a traditional restaurant in it. 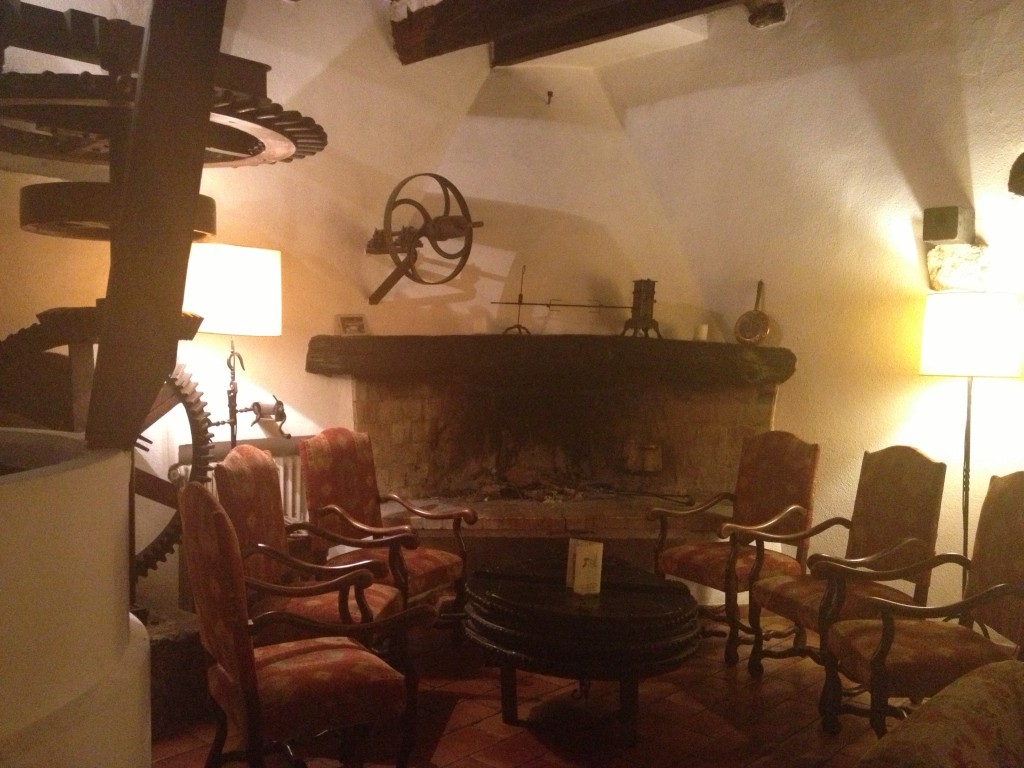 Its atmosphere is authentic – the humm of crickets in the garden, where the guests can dine during the warm summer days and evenings, surrounded by verdant flora, penetrates deeply into one’s bones, as much as the generous Provençal meal does. The indoor premises appear just as if its owners put chairs and tables in any space left between the iron, stones and wood elements of the old mill. Casual as it is, the food is prepared with love from produce sourced across Europe.
Cuisine: Traditional French
Visit: June 2013
Price: Medium (dishes between €12-35). 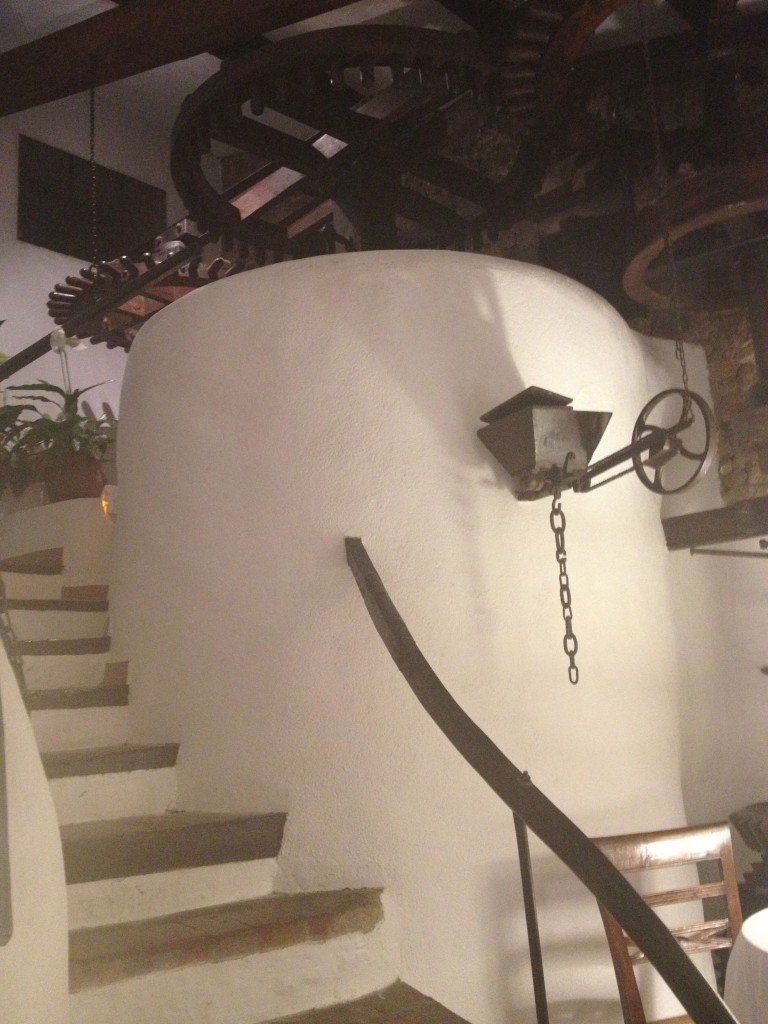 Food: L’Escourtin was awarded the title of Val d’Iris, by the French government. It is a designator of commitment to quality. The chef Philippe Choisy has been upholding the quest for quality at the restaurant for over 10 years and his passion for great food embracing tradition while moving it forward is visible for the eye and tangible on the palate.
The menu is changing according to seasons and the most suitable ingredients are used for its preparation. Dessert has to be decided upon right at the start when taking your order, which I find slightly inconvenient. What if my hedonistic brain decides – while chewing on my main course – that something sweet would best conclude the meal?
With or without the dessert, the food is domestic yet nicely presented. During summer months the courgette flowers decorate every local market seducing the cooks to made their own stuffed, fried, steamed or baked hors d’oeuvre. Philippe Choisy undertook a unique preparation. The Courgette fleur cuite vapeur en farce de crustacé, is steamed and stuffed with seafood, served with prawns roasted with Colonnata lard and a rich emulsion. 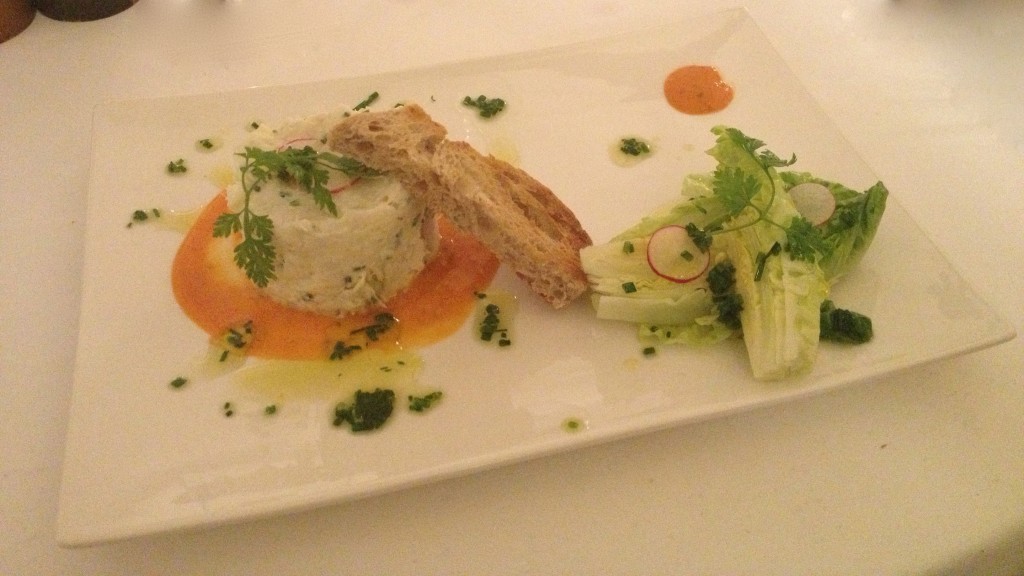 I really enjoyed the Tartare d’espadon mariné au gingembre et citron vert, which was a raw swordfish tartare marinated in a ginger and lime juice. The meaty rough texture of the fish is not too different from crab meat when served raw and chopped in a mashed-like fashion. Refreshing and rewarding, it tasted like in an ocean married to an exotic spicy princess with a warming touch (ginger).
As a main course, fish or meat are the usual choice. Roasted John Dory (Dos de Saint Pierre juste poêlé, trio de farcis provençaux, écrasée de pomme de terre, sauce vierge), cod (Dos de cabillaud à la peau croustillante, bayaldi de légumes d’ici au safran, émulsion d’herbes tendres) and other fish appear on the menu depending on the season as some fish are better in June, while others in October. I had the cod with its crispy skin served with saffron vegetables and fresh herbs sauce. The fish was tender and delicately flaky as a cod should be, the saffron added depth and richness, and the vegetables made it a light plate. 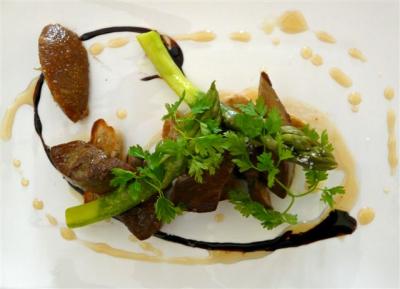 One of the restaurant’s signature dishes is its lamb. The Carré d’agneau was sliced to small succulent pieces, so one did not need to put too much labour into cutting and chewing. Accompanied by baked potato fondant, rich reduction, slightly dried tomatoes and steamed vegetables – all together striking a perfect balance. 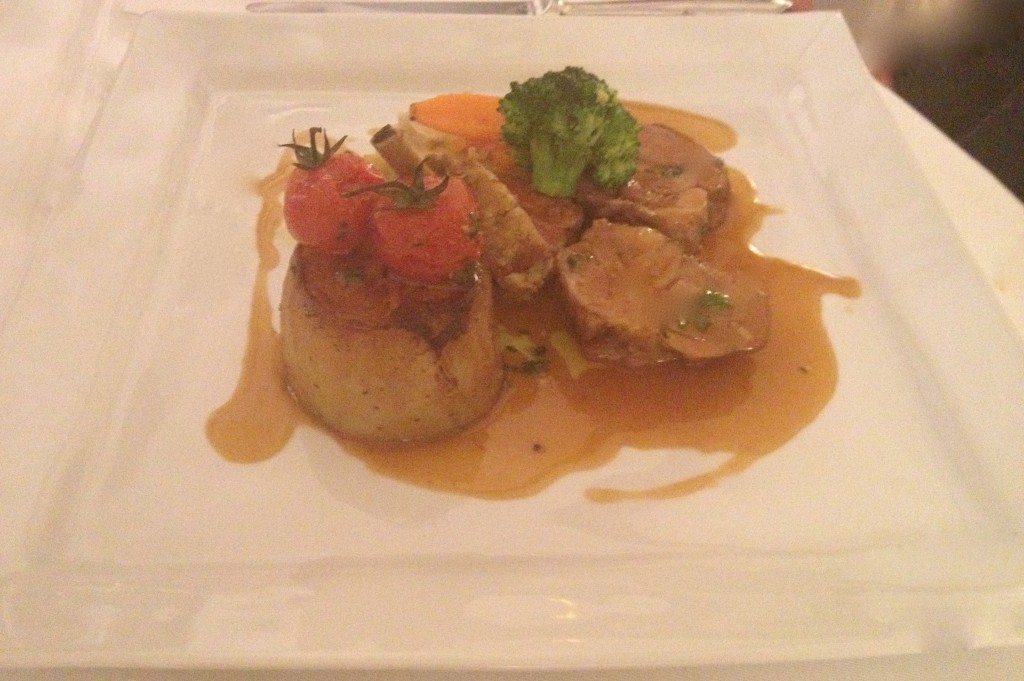 If the sugar department in your brain, calls for a supply, then you will have to take some other dessert than the Soufflé chaud au rhum brun, gelée d’ananas, because that one has to be ordered well-ahead for its special preparation. The hot soufle with dark rum and pineapple jelly might be a good reason to succumb to its soft sweet charms.

There is always a great Cheese selection (Le plateau de fromages affinés), so if the sugar rush does not overwhelm you or you forgot to order the dessert ahead, then go for it. It is excellent. Just look at the picture bellow and if you are a “cheeseholic” like me you will be in a savoury heaven. 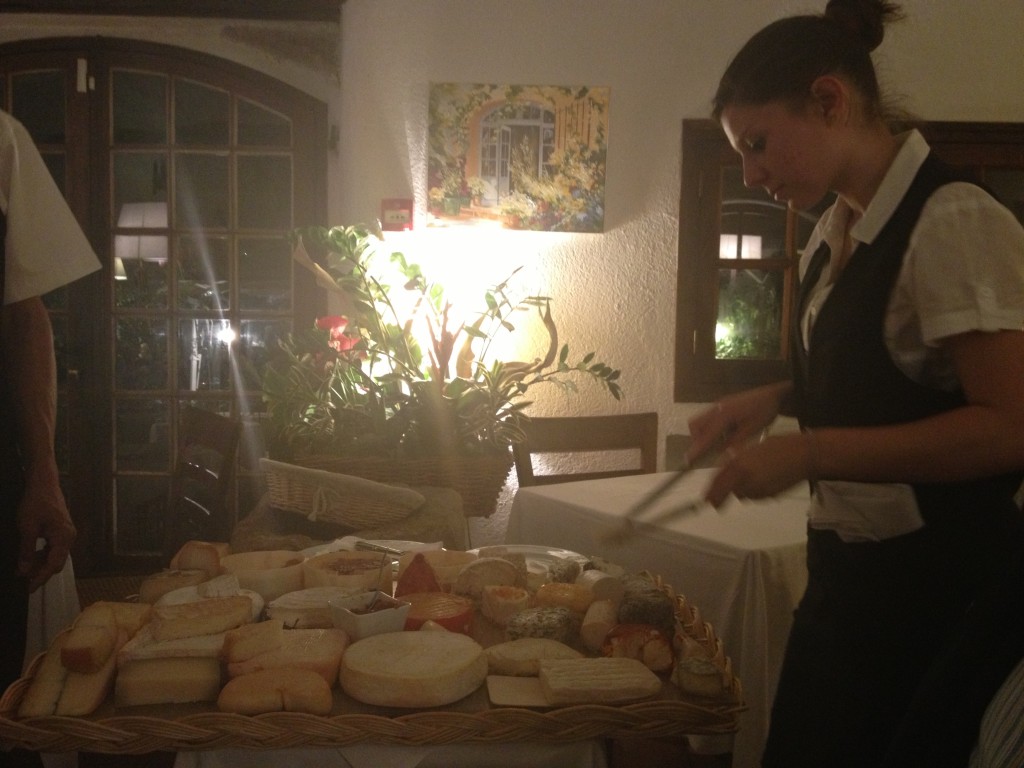 Drinks: The wines are very well-priced and there are many local ones to choose from. We usually go for a bottle of rosè or red Val d’Iris, Cotes de Provence, that is really good and it does not need to travel too much to the restaurant because the winery is about a 10 minutes drive away. If you like it like we did, you can drive the next day over and buy an entire case of this balanced and expressive wine. Their Cuvèe Eva is my favourite red wine and it costs only 9,50 € per bottle at the winery. 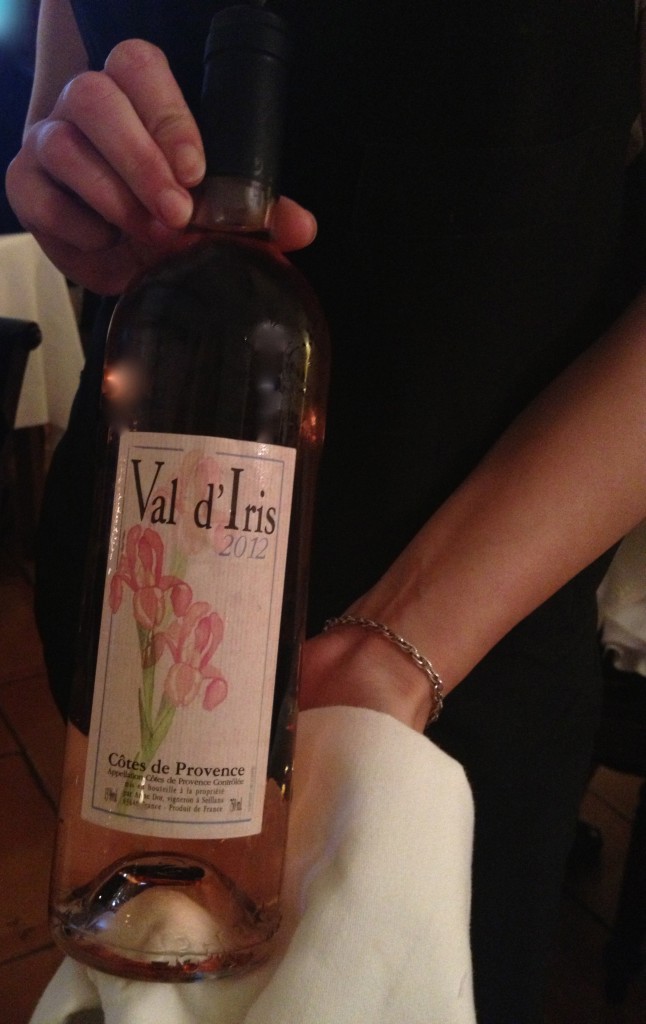