Straight from the farm an eco-conscious chef, Dan Barber, with his forward looking team of farmers, growers, cooks, as well as the backer of the project, David Rockefeller, together bring food’s future to the plates in New York. Supported by the efforts at Stone Barns Center for Food and Agriculture the produce from the Stone Barns farm in the fertile Hudson Valley of the New York State arrives daily to Blue Hill restaurant in Manhattan. To the metropolis the ingredients travel mere 20 miles, where they shine on the plates inside the chic dining room. The team’s quest for a sustainable future returns to the past, when cooking, pursuit of the ingredients and farming were in sync with nature. 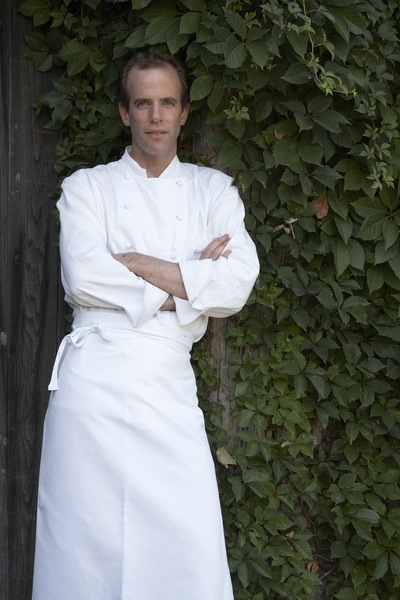 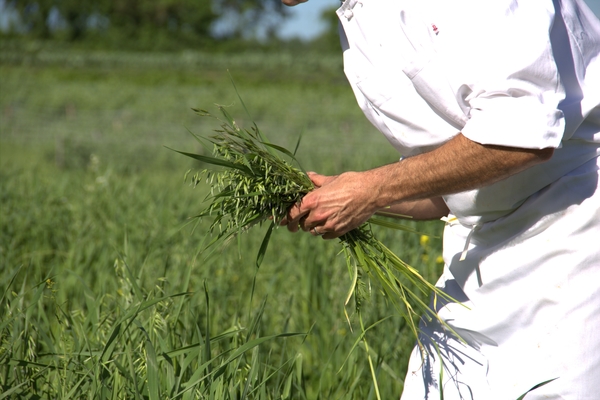 The Blue Hill is an older sister of the restaurant at Stone Barns, where various natural experiments are being conducted to increase taste but also to benefit the soil. Sourcing most of the ingredients from this farm and other nearby farms, Barber sowed the seeds for the blossoming interest of chefs seeking direct relationships with the produce they use. Although increasingly chefs grow their herbs and veggies in their kitchens or on the roofs, not many are blessed with growing and raising their staples on a farm where they can control the output. Imagine chickens and turkeys chasing each other on the rooftops in the Greenwich Village. Fun, but not an ideal solution for dining in a large city.
The chef is the heard leader as he encourages other colleagues to embrace sustainability. In March 2015 his pop-up project at his cosy neighbourhood restaurant used otherwise wasted ingredients to create a truly sustainable menu. This project titled WASTED was repeated in London in 2017 when a rotating shift of chefs cooked from the usual kitchen scraps at Selfridges, the fashion mecca of London’s consumerism.
Dan Barber is an outspoken activist chef, patron of the two distinctive restaurants (the first in Manhattan, then came Blue Hill at the Stone Barns), supporter of environmentally-conscious small farmers, good flavours, and the author of numerous books on sustainability. In the latest of his publications, The Third Plate, he explores environmentally sound possibilities for the future of our food system. He writes: “For most of human history, we foraged and then, out of sheer necessity, transformed what we found into something more digestible and storable, with better nutrition and flavor.” I reviewed this eyes-opening oeuvre at La Muse Blue in detail, so you can learn more about his in person direct experience findings on its pages. The plates at the restaurant will not shock with steaks liquified into a plastic tube or have-it-all with super nutrients boosted salad bowls. You may fathom these highly processed edible substances in the sci-fi literature and movies, but the current distrust in the over-manufactured food and the popular wave of locavorism hint better towards what you find at the Blue Hill. 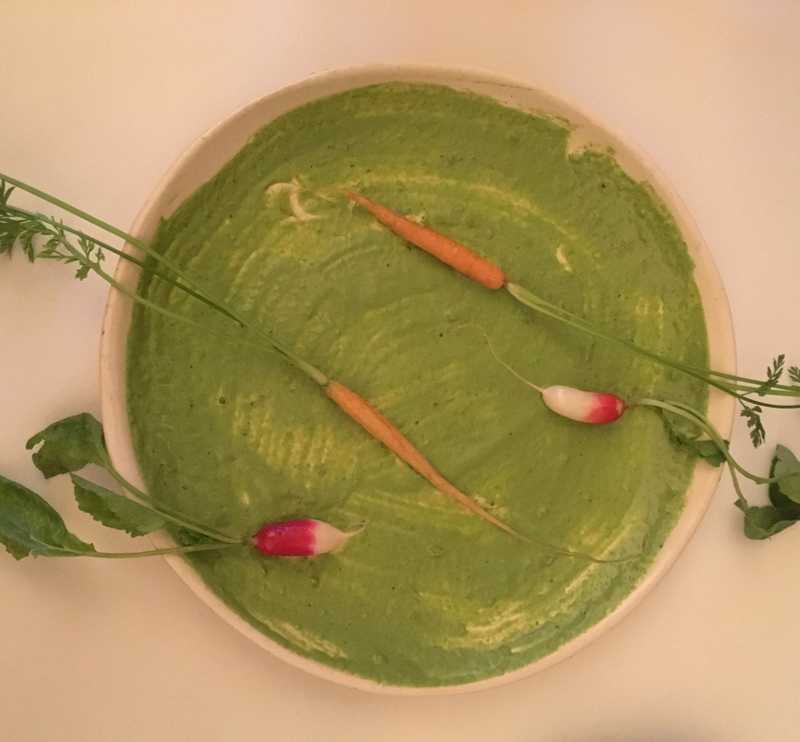 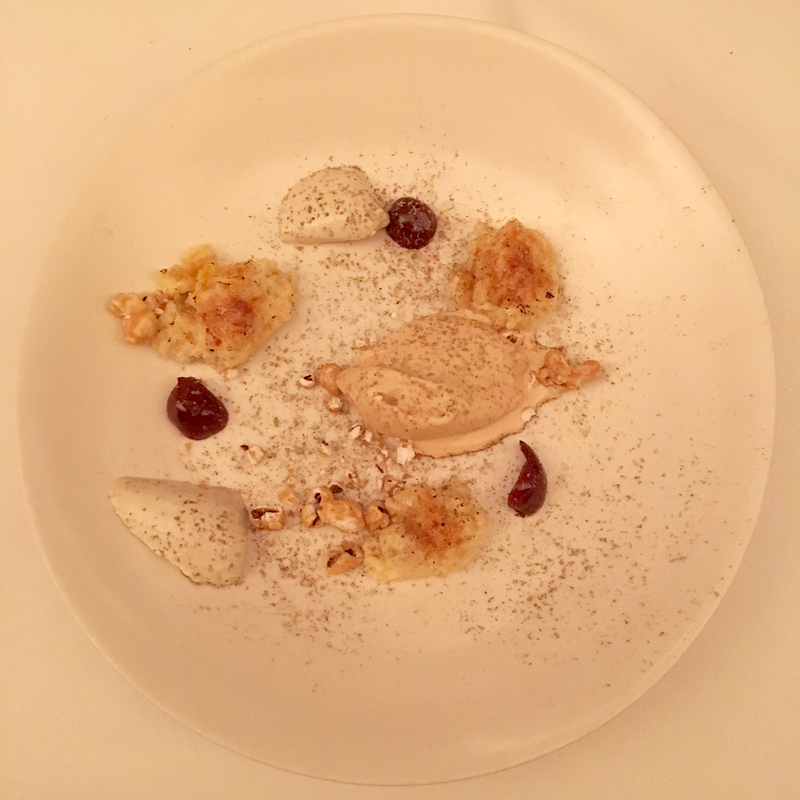 One late winter snowy evening, I was wrestling my steak knife into the superb vegetarian BLACK DIRT CARROT CUTLET with smoked apple, yogurt, spinach and adirondack red potatoes, delicious! Meanwhile, a cavalry of muscular men successively trawling through the dining rooms was carrying large sacks of vegetables, grains and boxes of butchered meat and fresh seafood. The veggies and grains, needless to say, outnumbered the flesh. Barber preaches sustainability, and reducing our consumption of the environmentally demanding animals (beef) and fish, particularly high on the ocean’s food chain, join his efforts to reduce food waste. The freshness shouts from the six-course tasting Farmer’s Feast ($98), where THIS MORNING’S FARM EGG is served. The recipe for the egg changes so you can have it with curried potatoes and potato chip broth in March as I had it or in a different preparation. A smaller four-course menu is also available. 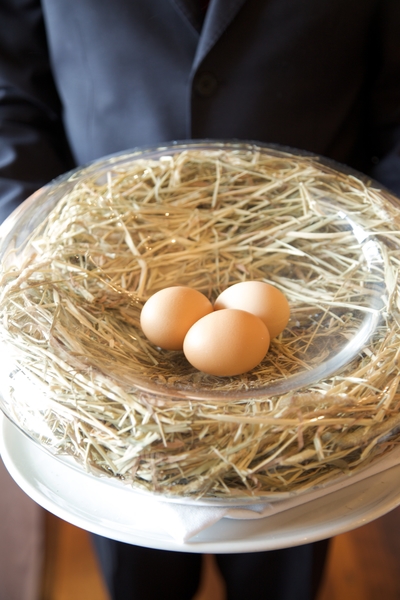 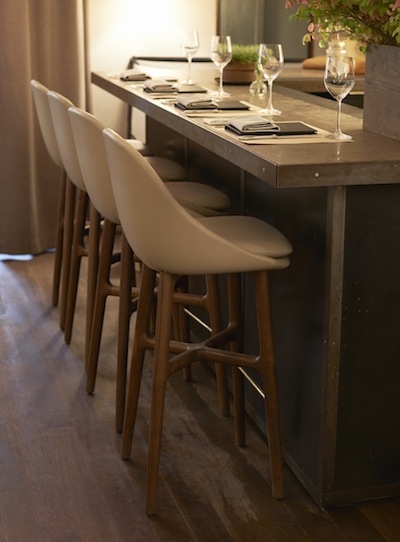 Ultimately dining out is about taste and the atmosphere, and while some have reservations to certain dishes on Barber’s menu, it is always a question of personal preferences. As with any other above-average priced restaurant, its adversaries may find the portions too small and the ingredients too humble (BLACK DIRT CARROT CUTLET anyone?). The dishes change seasonally, sometimes weekly, and if a specific tasty grain, plant or animal breed fascinates the cooks, then even daily. The carrot steak had some variations. Lately it was served as CHICKEN FRIED CARROT STEAK with potatoes and beet ketchup. You can better appreciate Barber’s understanding and connection to the soil when you try the food and find that it tastes very good. I have dined at the Blue Hill in the Greenwich Village in various seasons and even under the most challenging circumstances when most of New York was snowed deeply in, so it was a heroic task to deliver the produce from the upstate farm. Corn was probably in of the deliveries since the luscious dessert made with the EIGHT ROW FLINT CORN of corn cream, pickled cherries and the incredible popcorn ice cream graced the menu.

Seasonal touches on the menu at Blue Hill

Some of the dishes are inspired by a crop rotation. A complex blend of twelve local grains goes into the ROTATION RISOTTO bursting with more flavours and nutrition than its typical Italian version made with highly polished, fibre stripped, white rice. Adding legumes and seeds made for a wholesome, healthful dish. The chef likes to experiment with tastes “not based on convention, but because they fit together to support the environment that produced them”. Being inspired by the world’s best cuisines and their glamorous past he nods to nose-to-tail eating. Not only the Chinese, the French, but also the British and Spanish incorporated the “lesser” cuts of meat and fish into their iconic dishes. From the French pot-au-feu, though Spanish morcilla (pig’s blood sausage) to Chinese chicken feet and fish head, they are all edible libations. Barber may offer GRASS FED LAMB NECH AND BELLY with salsify and kale kalettes, but who knows perhaps the feet will find their place in one of his plates soon! VENISON IN LEAVES may be served in winter, while the Barber bread from specially bred perennial wheat accompanies every meal.
For a conventional diner the menu may seem off-putting. As daunting as it may sound, the food at the Blue Hill is much more than what you would be able to cook yourself at home. In tune with many world’s best chefs including the French multi-Michelin stared Alain Ducasse, Blue Hill also elevates veggies to the forefront. Culinary trends entered the chefs’ consciousness. Recently in the cauliflower “pizza” crust craze spirit, I had a POTATO “PIZZA” with broccoli, kale and melted and foamed cheddar cheese. It was interesting but more like a slice of potato gratin with vegetables than a pizza. 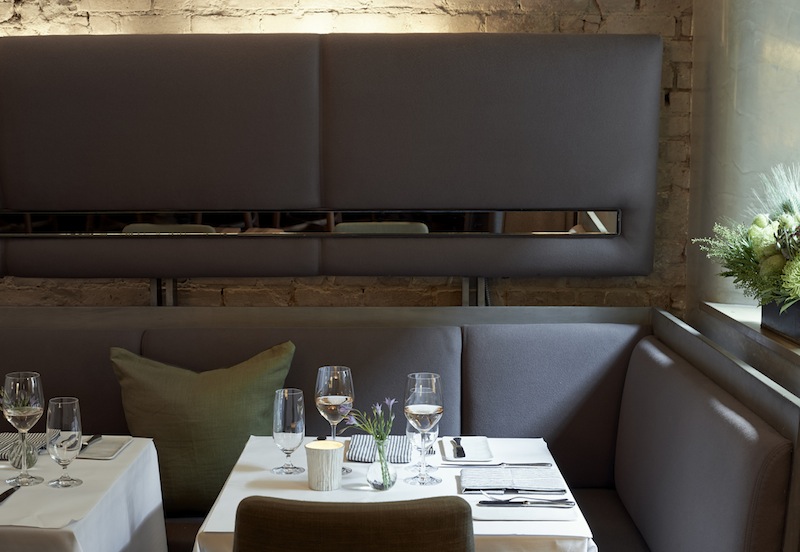 Blue Hill is an elegant and dimly lit restaurant in one of the hippest Lower Manhattan districts. A well-trained staff eagerly explains what each dish is about and happily advises if you cannot place the bet on one plate. The sommelier picks very interesting artisanal bottles as well as wines by the glass. We had a rare red wine from Santorini, the Greek island that had been flooded with the white Assyrtiko recently because of its immense popularity. Last time we had the Italian deep coloured and tannic Sagrantino red varietal in Rosso de Veo by natural winemaker Paolo Bea in Umbria. Only 7200 bottles were made, while its 15% of alcohol rendered us quite early light headed so we will not crave this bottle any time soon.
The cooking at the Blue Hill is “Like all great cuisines, it [is] constantly in flux, evolving to reflect the best of what nature can offer”. The seasonal approach not only to the ingredients themselves, but also to appropriate cooking techniques, defines the interconnectivity of the web of the food chain served proudly at the restaurant. Dan Barber is lucky though that he can “grow nature and encourage more of it” mainly because of the generosity of his affluent donors. I wish that more wealthy individuals invested in projects that benefit our land, our taste and ultimately bettering our and our children’s lifestyles.
75 Washington Pl, New York, NY 10011
+ 1 212 539 1776
Daily for dinner from 5pm-11pm