"Whether you are infatuated with "entophomagy" aka insect-eating, traditional in Mexico or more curious about a more appetising fusion of the adventurous local fare, Quintonil is the ideal initiation."

Pure, unpretentious and wood craving Nordic design meets local ingredients at Quintonil. As one of the most groundbreaking restaurants in contemporary Mexico, the Noma and Pujol experiences of the chef funnelled into an unconventional blending of regional Mexican cuisines.
Set in the posh Polanco, on a leafy street off the luxury-gleaming Avenida Presidente Masaryk, a discrete entrance secures comfort in the wildness of the 21 million maze of Greater Mexico City. Inside the restaurant wears a casual cloak of simplicity, allowing a room to a display of Mexican warmth and curiosity through its friendly service.
Jorge Vallejo, a youthful force behind Quintonil, is the rising culinary star of the moment. Personally sourcing from small farm operations to wield ultimate control over quality, and tweaking the home cuisine of his nation into more elaborate yet clean presentation, is smartly aligned to the current dining trends. Quintonil is a wild green herb native to the gastronomically abundant Oaxaca region in Southern Mexico. Since local herbs widely define the restaurant’s creative dishes, this name aptly captures its spirit. Locally sourced, native ingredients showcasing Mexico’s culinary diversity inspired by its resources.
Flowers, powders and miniature herbs highlight the visual artistry on each plate. The chef’s learning curve spiked when he joined the team (as the head of catering) at Mexico’s most lauded restaurant Pujol, while brushing through the kitchen of the then World’s Best Restaurant Noma in Copenhagen awakened his creative spirit. With Pujol’s chef Enrique Olvera flying more often to launch new restaurants, the three-years-young Quintonil remains more focused on its kitchen and it shows in the precision of the food. The chef’s wife, a trailblazer in the international hospitality management, perfects the experience by bringing a family warmth into the trendy yet cold contemporary austerity. 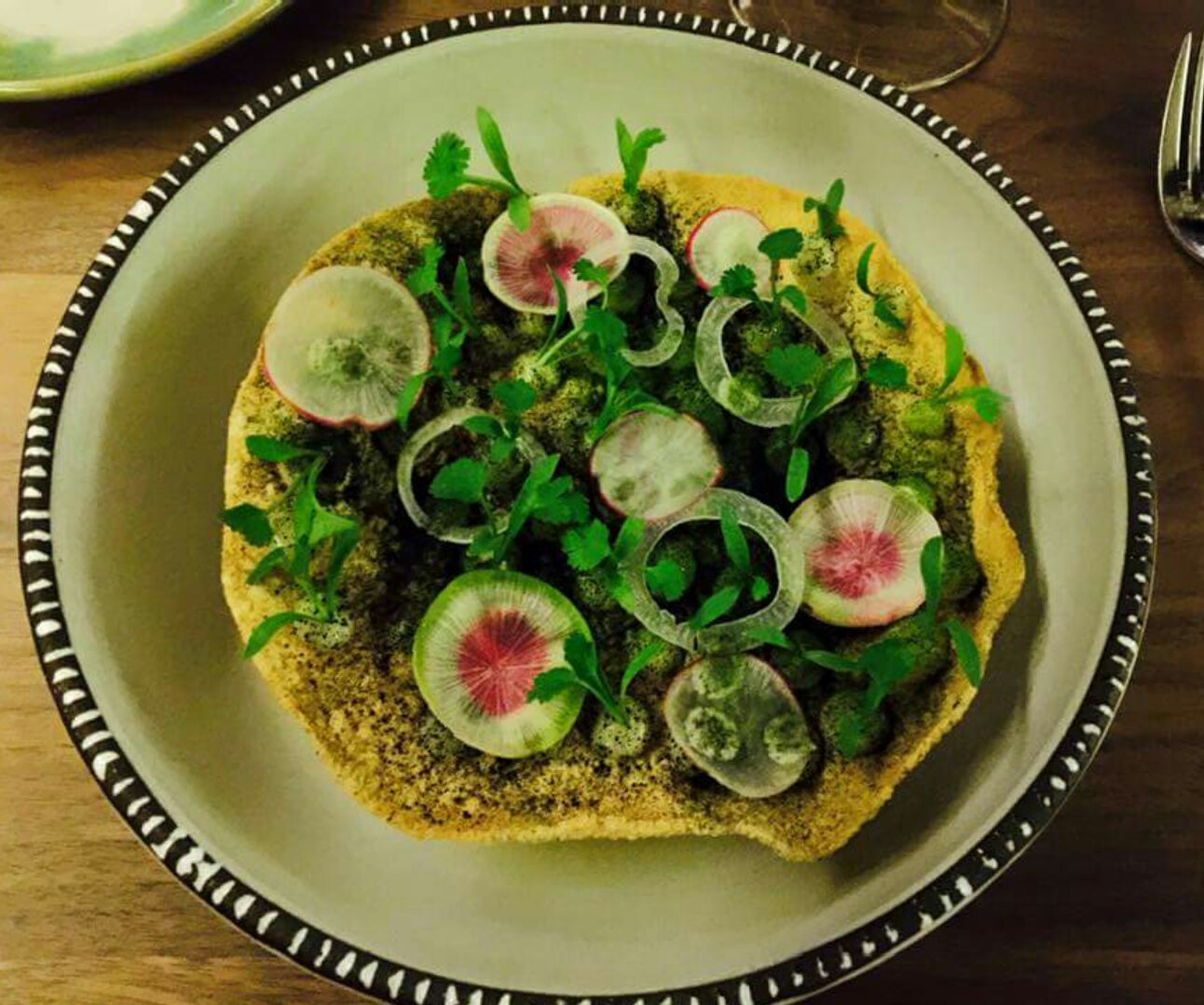 Distinctively Mexican ingredients such as poblano amaranth, avocados, beans, corn, sharp Cotija goat cheese, a rainbow of chilies, huitlacoche fungus infesting corn, all shades of green herbs such as epazote and huauzontle (green herby part of the amaranth), nopales from the prickly cacti as well as turkey (native to Mexico) are used by the chef.
By using the Mexican names of the star ingredients in each dish, Vallejo confuses as well as educates. The menu thrives through its patriotic language, and an outsider can find herself like Alice in Wonderland. Unless your dining companion is a well-read Mexican chef or the staff is willing to dive into the depths of your uncertainty, you will brace your dining experience at Quintonil with my well-researched highlights from the chef’s favourite ingredients, that he often incorporates into his seasonally changing menu. Here are the leading autumn flavours through the palate of Jorge Vallejo.
To warm us up to the Mexican culinary fiesta, a welcome compliment from the chef arrived in a crystal cup of refreshing cold nopales soup. My first ever slurp of this green been resembling, but thicker and more succulently textured paddle-like outlier of the cactus fruit. A good introduction.
Perhaps the most exotic appetiser for a Westerner was the “Salbute” with glazed mushrooms, “escamoles” and chile. Curious, I had to order this by Yucatan inspired antojito (snack). The Salbute is made with corn masa (dough base for all tortillas), that is cooked on a dry, hot cast iron skillet until slightly puffy. A delicate cut into the salbute for stuffing is then sealed and lightly fried. They are typically topped with tomatoes, lettuce, a slice of cucumber, ground beef or chicken, avocado and pickled onions. At Quintonil through the escamoles (ant eggs), mushrooms and spices were stuffed inside, while the crispy tortilla lid was dotted with caper-hued dollops of sauce covered by herbs. The firm egg-white texture of the ant eggs is nothing to worry about, its straight-forward and simple taste though calls for spices or a sauce, and the chef did a brilliant mix for the stuffing. 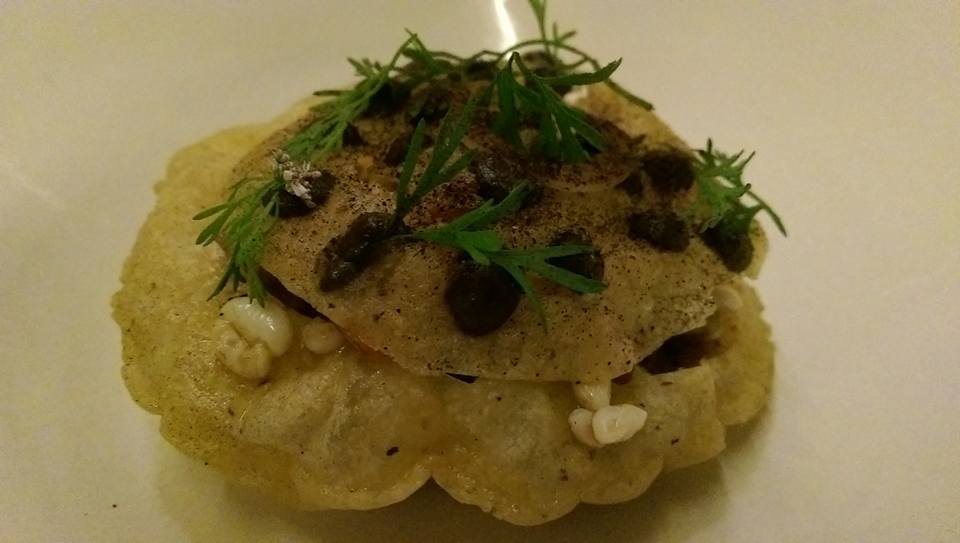 A hearty String cheese soup with fried pork belly and plantain is another re-imagination of a typical Mexican staple. Often a backbone of lunch, the main meal of the day, this stew-rich “sopa” draws from the popular Queso Oaxaca, also known as string cheese quesillo (used in quesadillas), ubiquitous in the Southern Oaxaca region. The coastal state of Veracruz adopted plantains from Africa while pork sailed once from Spain, so this creation reminds of the Mexico’s historic influx of foreigners and their native ingredients since the 15th century, changing its prehispanic cuisine forever.
The main courses also pick from both the indigenous pre-Hispanic and the colonial know-how as in the Octopus in its ink with potatoes and “longaniza”. Longaniza is a chorizo-style Spanish sausage, in this dish adding spicy richness to the succulent tentacles of the octopus. Potatoes are the closest import (Peru) featuring in this high-profile tasting plate. Served cut and roasted with their skin with shavings of white turnips, red radishes and grilled green cherry tomato, the balance between rich and fresh flavours was cast perfectly.
With the Duck in “recado negro” sauce, pickles and kohlrabi, the chef applied the Eastern fermented foods vibe to a traditional Mexican spice blend recado negro, also known as chilmole or black chile paste based on burned hot arbol or ancho chile, vinegar, annatto seeds, allspice, cinnamon, black pepper, cloves, garlic, onion, oregano, epazote and salt.
Mole is a complex sauce of spices, herbs and other regionally distinct ingredients such as fruits, nuts, seeds, vegetables or cocoa. There are as many moles as there are families in Mexico, but their regional name is strictly related to the type of chile used. That is why I was attracted to a vegetarian plate of “Chilacayotes” in homemade mole, charred tortilla, basil and lemon thyme sprouts. Chilacayote is a type of squash, its harsh and thick skin brings to mind a pale watermelon. While, its taste tends to attract sweet preparations in Mexico, the chef used it instead of meat in a harmonious friendship with his mole sauce. Comal, the flat griddle is used for cooking tortillas was surpassed by the chef, who charred it to an effect of a sexy smokey eye, deep and addictive. 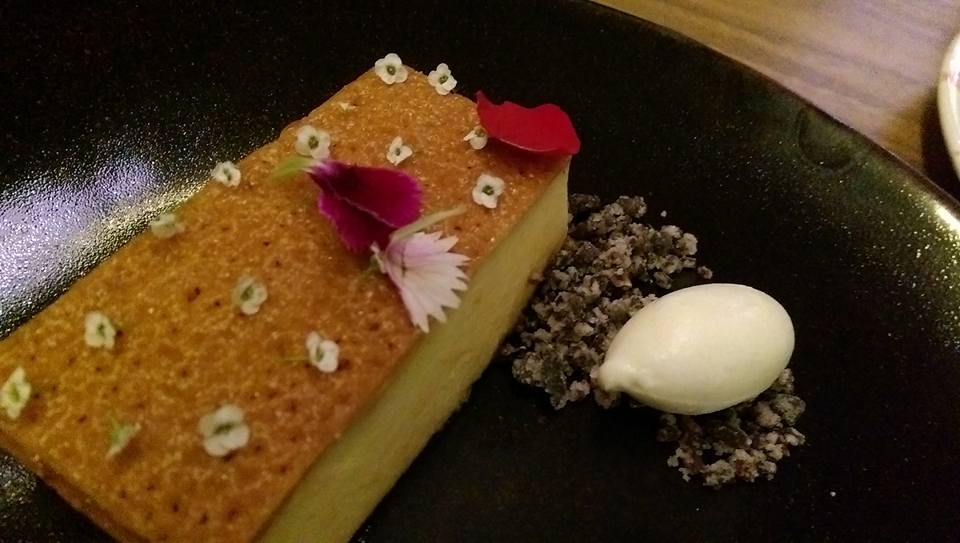 A cactus sorbet was served complimentary to clean our palates prior to our dessert feast. The convent nuns from Europe introduced many sweets to Mexico, but there are plenty of native local fruits as well as vanilla, the noble pod plucked from orchids, that bring the triumphs to the table.
As in the Mamey pannacotta, sweetened corn crumble and mamey seed ice cream, where the orange-tinged thick-skinned Mamey sapote fruit native to the Meso-America took the main stage. A truly contemporary dessert, light and multifaceted with icy texture through smooth pudding of mamey to crunchy corn crumbs.
Spain met the local cocoa, a flower garden, and the modern infatuation with the vegetable desserts in Ocosingo Cheese Flan, Celeriac Ice Cream, sugar-coated cocoa nibs and toasted almond tile. Almonds were a Spanish import as much as cheese while nobody can dispute the origins of the cocoa obsession, here you taste the sweet marriage of the Old with the New Worlds.
To accompany the desserts, the Mexican high elevation coffee, herbal infusions from the restaurant’s own garden as well as, upon request, the Mexican speciality of spiced up and by unrefined rapadura cane (Piloncillo) sweetened Café de Olla prepared in clay pots are offered. Following the advice of our Mexican chef companion we chose the latest, a cinnamon flavoured caffeinated treat on its own. A must try! 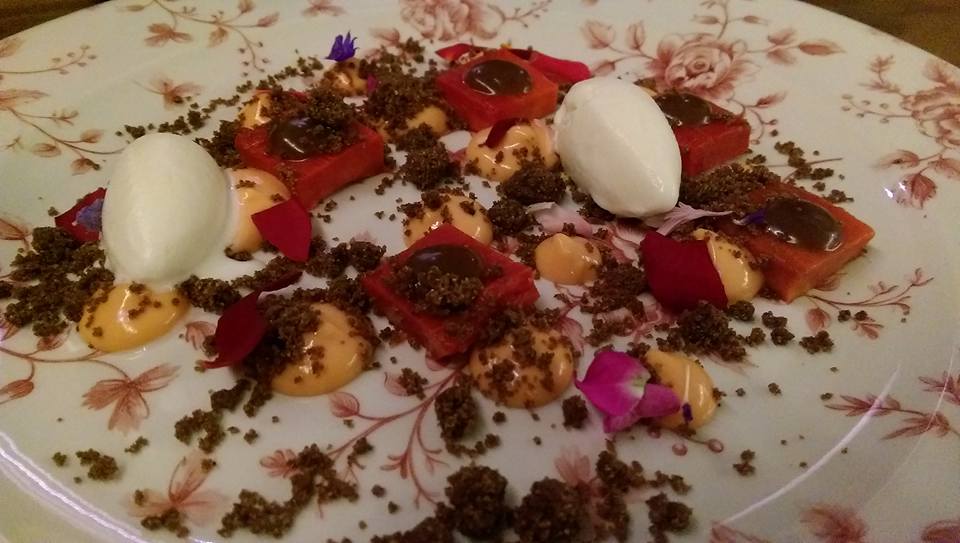 If your appetite allows, and to shortcut your decision process, go for the best of the season in a ten-course tasting menu. For less than 70 US$ it is a bargain.
The wine selection is appropriate, but we were ravenous for Mexican wines. The trio of red Cabernet and Merlot blend in Unico Gran Reserva by Santo Tomas as well as the Gran Amado and Icaro, left us gasping for more Mexican wine during our inaugural trip to the country. The best red wines in Mexico are made in the long thin strip of Baja California. The Spanish brought the grapes with other plants and animals during their conquest and catholicism sustained its demand in a tequila dominated country.
Whether you are infatuated with “entophomagy” aka insect-eating, traditional in Mexico or more curious about a more appetising fusion of the adventurous local fare, Quintonil is the ideal initiation. Not too shocking, but rather refined Mexican gourmet odyssey served on unpretentious artisan pottery. Buen provecho!
🕗  Mon-Sat: lunch 1-5 pm, dinner 7-11 pm; Closed on Sundays
✉  Newton 55, Polanco, Mexico DF
☏  +(52) 801 660; +(52) 800 254; +(52) 802 680