Over 1.500 varieties of fruits and vegetables, and more than 40 animal breeds are represented on the diverse market. Have you heart of loquats, pluots or pawpaws? No, then come and taste, there is something new for everyone.

Natural biodiversity is celebrated thrice weekly at the historical San Francisco Ferry Plaza farmers market. Its scale proving that California is still in the centre of the food movement in the United States. The largest state grows the most high quality produce in the consumerist country, yet creating a healthy food system rarely gets on the male-dominated political agenda of the presidential candidates. Essential to our well-being, diverse diet high in nutrients and low in potentially harmful substances, must become the right of any worldly citizen. Stereotypically, feeding the world healthy food is mainly ascribed to women, so Mrs Obama took the reins of sustainable nutrition into her own hands in the US. Her vegetable garden in the White House will reportedly be preserved by the new First Lady Melania Trump. Mrs Trump will surely hire a good team to weed the organic patch, but this is not enough to promote and support agriculture on sustainable scale for every citizen in the country.
Some US grassroots organisations such as CUESA (Center for Urban Education about Sustainable Agriculture) emphasise the life or death necessity to “cultivate a sustainable food system through the operation of farmers markets and educational programs”. Connecting consumers with farmers builds trust, supplies you with better quality and more healthy produce and is a win-win situation for the producer, the environment as well as YOU! 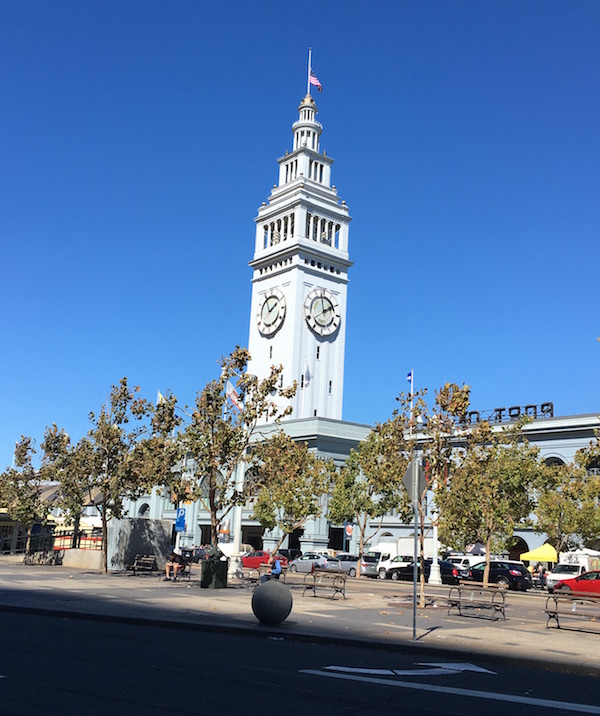 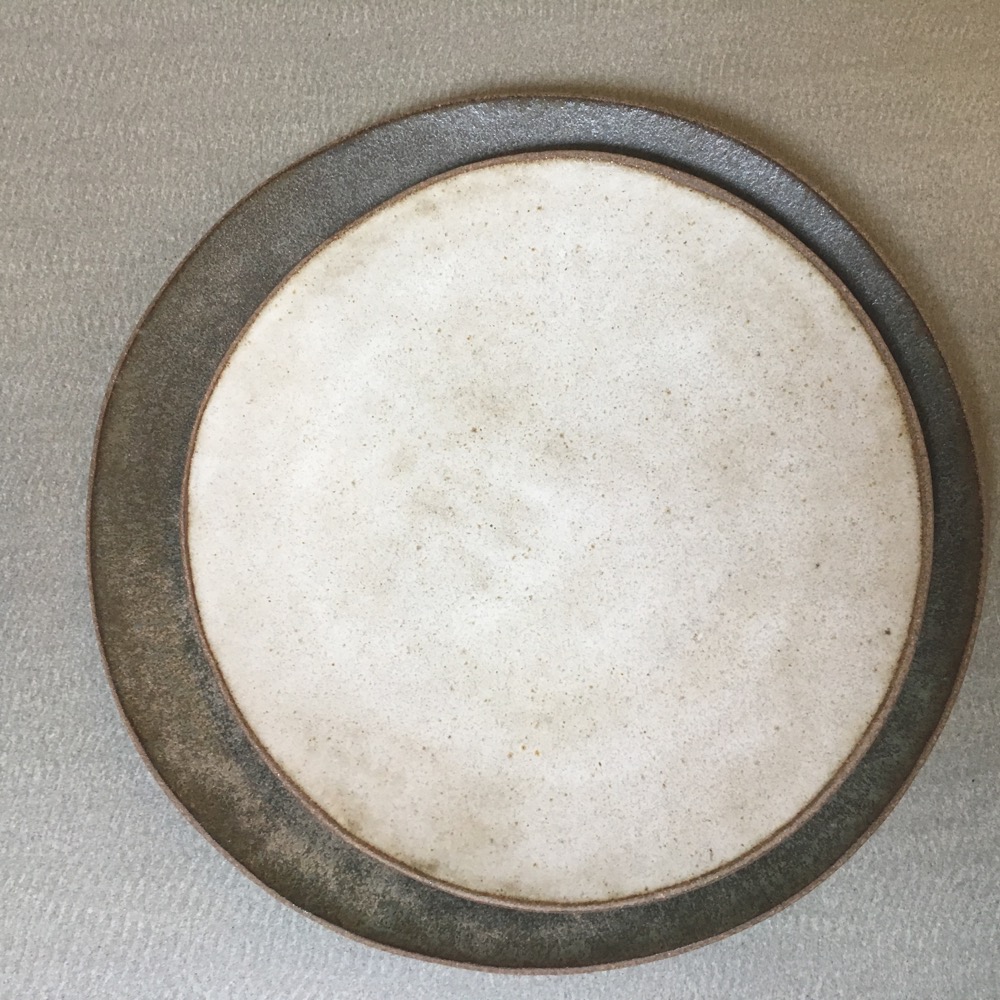 The Ferry Building, with over a century old history (built in 1898), is still the heartbeat of San Francisco, but today inside you will find a gourmand’s paradise. One of the most established palate and nose teasers is the specialist mushroom purveyor Far East Fungi. They sell dried and fresh, local or imported, common or exotic mushrooms and products from the fungi. Truffles from Italy, chanterelles from France, nameko from Japan, chicken of the woods, abalone and lobster mushrooms, and many others that your creative mind fantasises. Banana vinegar is sold at the Mexican ranch purveyor, locally fired ceramics by Heath, unusual American-crazy ice creams and gelato sandwiches – think of prosciutto, Vietnamese Coffee (I quite liked this one, very condensed milk sweet), Secret Breakfast (Bourbon and Cornflakes), Jesus juice sorbet (I have no idea!?) by Humphry Slocombe wanting you to “rethink everything you know about ice cream!”, a gourmet grocery at Village Market and the salivating Gott’s Roadside burgers from Napa Valley now satisfy the long lines of hungry visitors. There are also champagne and caviar (from local sturgeon) bars, locally roasted brews serving cafes (Blue Bottle), a Chinese tea room, an oyster bar, the famous dairy and cheese producer Cowgirl Creamery, the aromatic organic breads of the Acme bakery, but the most popular and best is the contemporary Vietnamese restaurant The Slanted Door. Check for the full list of merchants here. 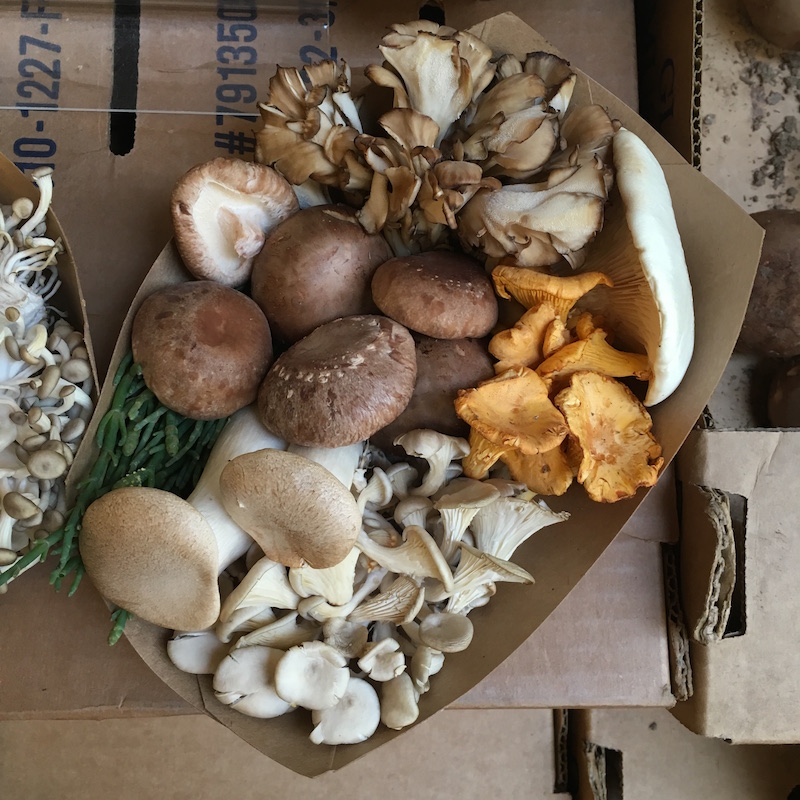 For more than two decades, every Tuesday and Saturday (a wider offer) the Ferry Building Plaza farmers market envelops the outdoors of the historical clock building, where boats still pick up and dispense passengers.
San Francisco is blessed by its surrounding land, where the most creative and dedicated farming in the US is supported by its well-off customers seeking local, farm to table produce inspired by the Chez Panisse founding chef Alice Waters. Waters, as the local pioneer of the California food revolution in the 1970s elevated the farmers and their ingredients as the stars on the plates.
Speciality peppers are sold in their rainbow of shades, spans of hotness, and pigmy to dinosaur sizes by the Palo Alto-based Happy Quail Farms. This family business has been since 1980 growing and drying all kinds of peppers but recently their Nicotiana or fresh cut and semi-dry uncured tobacco leaves, captured the palates of the country’s best chefs such as Thomas Keller of the French Laundry. Not for smoking but for cooking, so do not wrap a cigar from them!
The little stand along the Bay’s edge has more to offer than your typical market. The fruits and vegetables grown at the Lonely Mountain Farm are rather unusual drawing in curious eaters like me. Their lemon cucumbers offered at the San Francisco Ferry Plaza farmers market were ravishing.
Farmers today look more like a cross between a bearded and tattooed hipster with his girlfriend tending the soil in an unconventional manner or the good old farmer with a straw hat checking the weather forecast on his smartphone. The embodiment of the later was the man selling his sweet apple treats at the Little Apple Treats stand. Little Apple Treats as its name suggests specialises in sweet Sebastopol apples paired with other locally grown organic ingredients, such as almonds and other nuts, grains, seeds and even olive oil. Suganat (dehydrated cane juice) and piloncillo (Mexican traditional unrefined dried cane juice). Their New World Blend was a better breakfast than anything our luxurious Napa Valley hotel offered, and to CUESA’s satisfaction I was inspired to bake it back at home. At the market there are almost 90 apple varieties, so do not stop at the biscotti and granola stand. 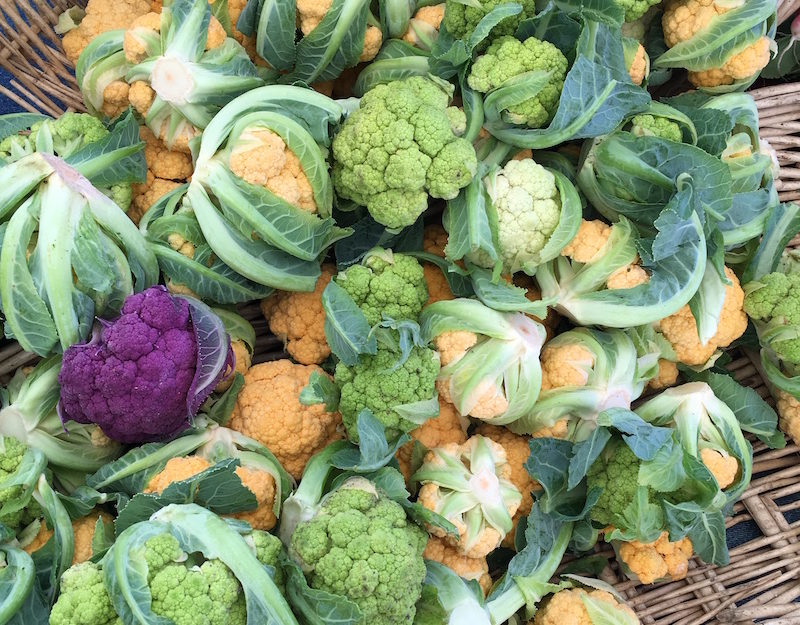 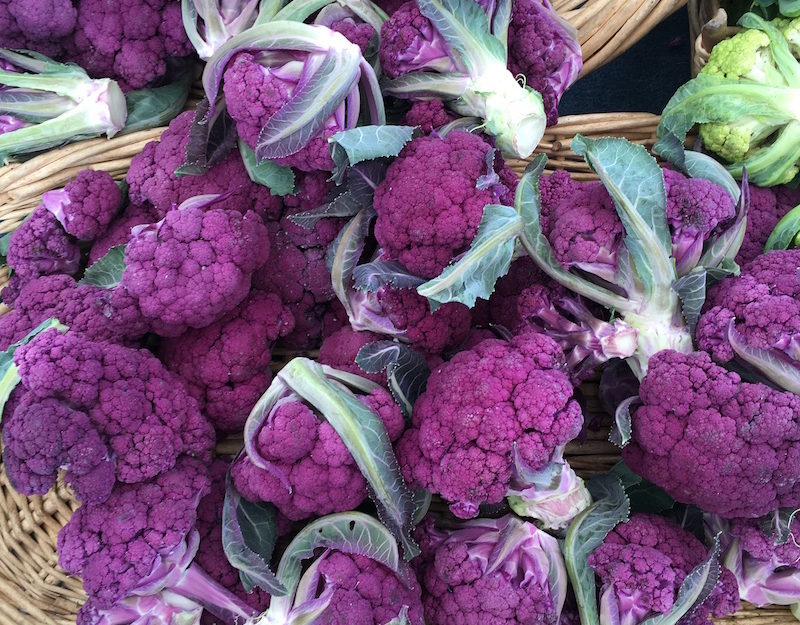 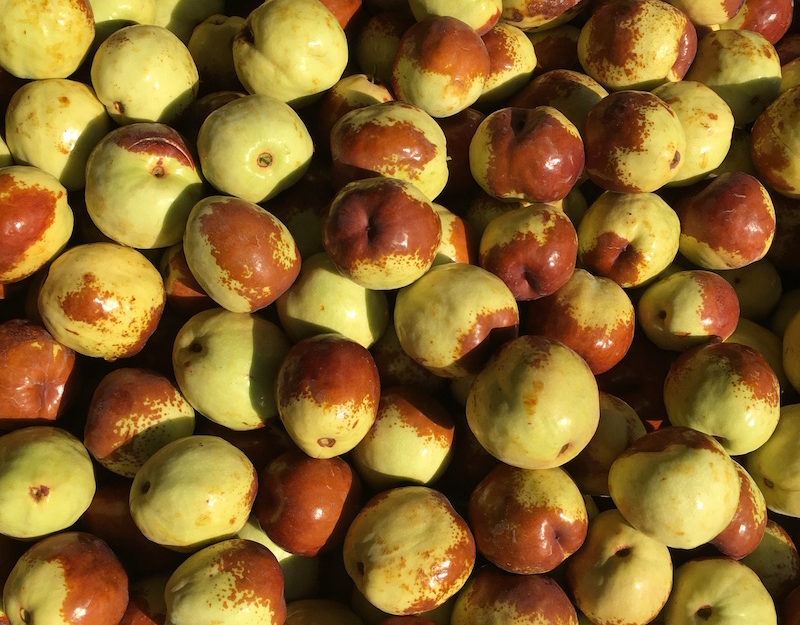 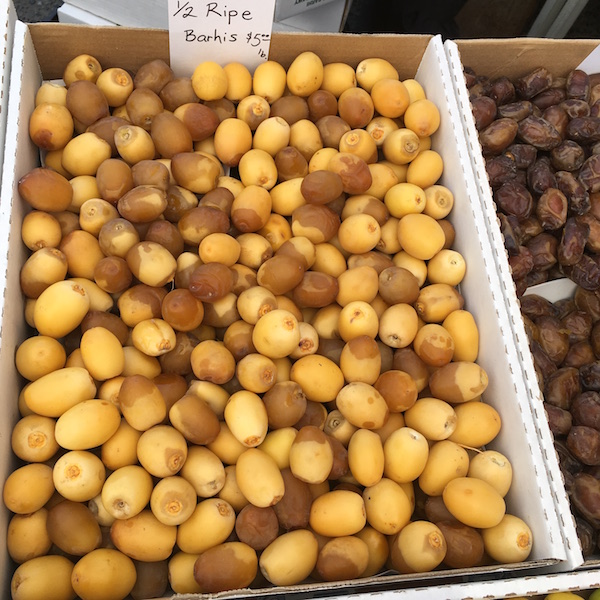 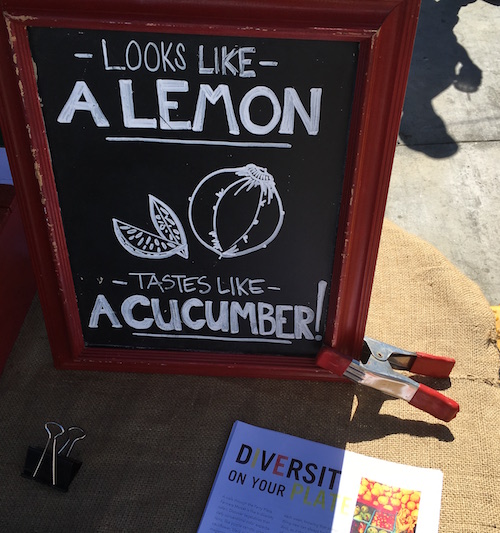 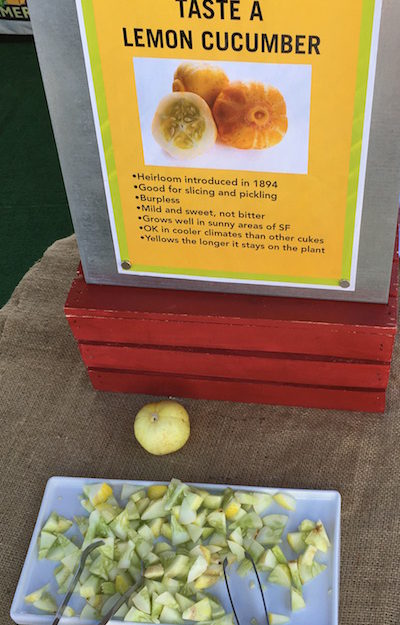 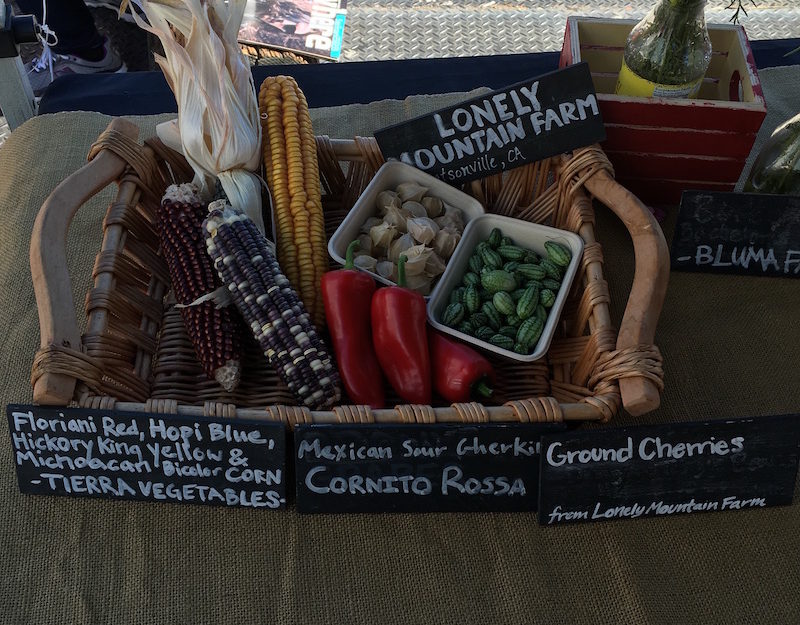 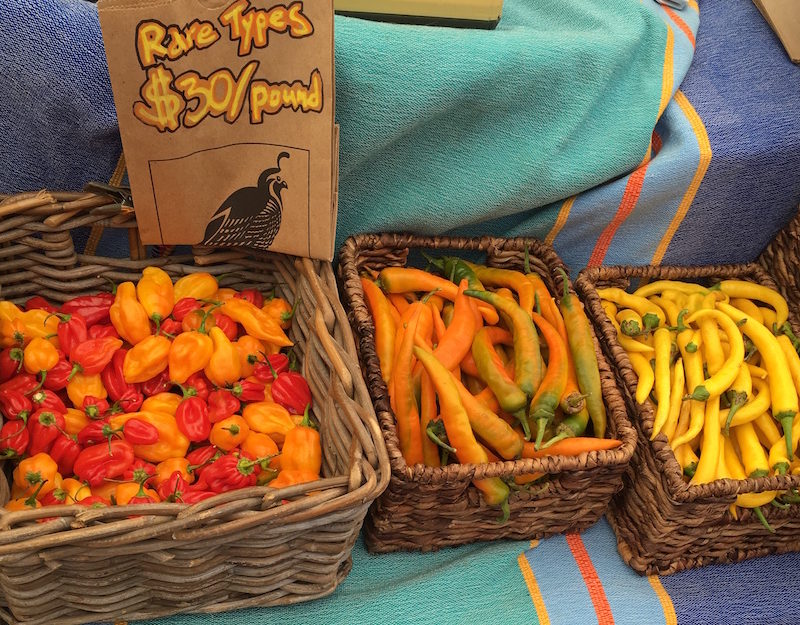 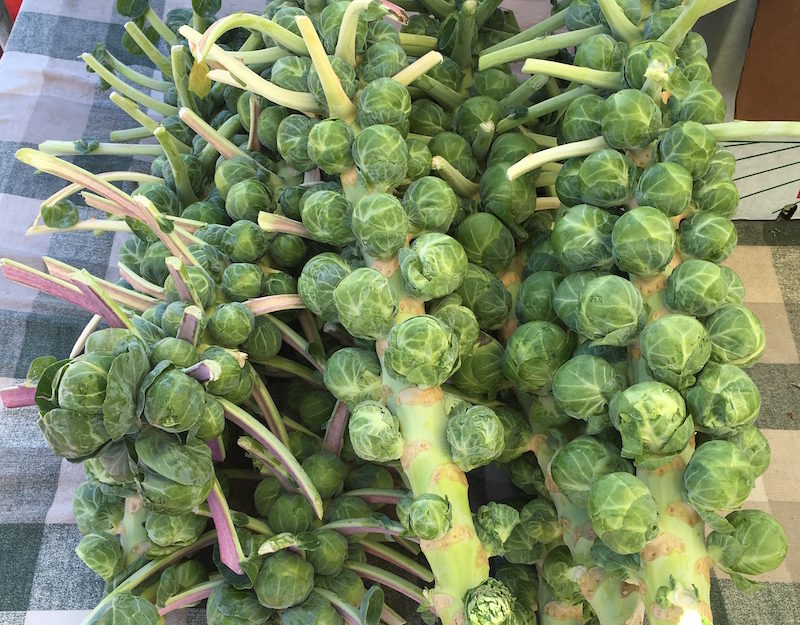 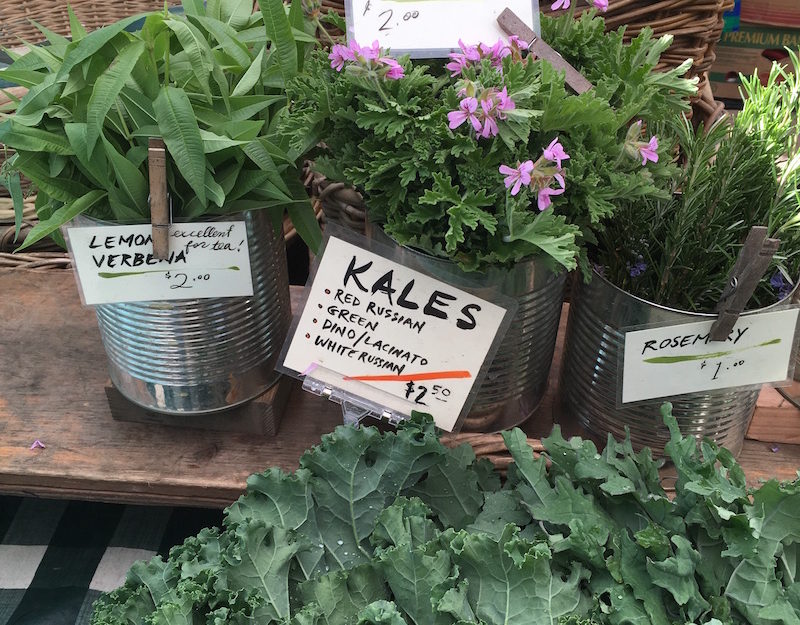 CUESA celebrating the “rainbow of plenty”

The San Francisco Ferry Building farmers market is operated by the above mentioned CUESA, who ensures that transparency, education, fair pricing, quality and highly nutritious produce is being offered at their markets. This also means that sustainable seafood, meat and start-ups are supported.
Organic Kale chips by Kaleidoscope now appear beyond the San Francisco Ferry Plaza farmers market at the local gourmet stores and I have seen them as far as New York. Their tender kale crisps are dehydrated with locally sourced ingredients (their sources are provided on their website) such as grass-fed beef or bison broth, vegan lemon and ginger miso, and other outliers in the kale snacking scope. Trying them all, I endorsed my favourite by buying the Spicy Seaweed with Dates & Bison Bone Broth Kale Chips, perfect for a plane ride, just brush your teeth after it otherwise your smile will look as if you grazed on a meadow before.
Fermented KRAUT by Farmhouse Culture sells next to various flavours of distinctively central European style sour kraut also fermented cabbage beverages, aka “gut shots”, that promise good life for your gut microflora.
A Japanese fermenting savvy penetrates AEDAN‘s Japanese pantry by chef and owner Mariko Grady. Made in small batches from organic ingredients, the Japanese tradition is delivered to you through the magic natural power of the rice koji ferment (Aspergillus oryzae, a natural, enzyme rich ingredient that is the starter to make miso, soy sauce, sake, shochu, mirin and vinegar). With its help, Aeadan has transformed rice into amazake (sweet rice condiment), made miso paste (Chickpea, White, Country and Kyoto style sweet miso), as well as sticky, get used to them – smelly soy beans. You can also buy the koji or Doboruku sweet sake kit for making your own at home. For a quick snack the Japanese rice ball “omy subi” takes swiftly care of any hunger pang.
For a natural sweet snack the dried fruits grown at Bella Viva Orchards in California taste beyond the typical grocery store pears, peaches, plums, apples and persimmons. I savoured the persimmons, nothing else added, with a blissful joy that brought me back a week later, just to get another pack for my flight to New York.
CUESA distributes monthly shopping list at the San Francisco Ferry Plaza farmers market to educate the buyers about fruits and vegetables currently in the peak season. In September, you see plenty of apples, cucumbers, dahlias, dates, fresh olives, grapes, wax beans, and more California ripened produce. In October almonds and brussels sprouts are back on the stands, pears, pomegranates, but also the recently rejuvenated jujubes and wholesome sweet potatoes. CUESA organises food and farm tours, harvest festivals, gardening programs for high school students, suppers, samples, school field trips, cooking demos, and other pop up events and talks at the Ferry Plaza Farmers Market but also in Oakland at Jack London Square Farmers Market. Local chefs and cookbook authors take over the stage showing their take on the market to table cooking. To learn more about anything local sustainable food system visit their Food Shed, and to support their mission donate to this nonprofit organisation. Over 1.500 varieties of fruits and vegetables, and more than 40 animal breeds are represented on the diverse market. Have you heart of loquats, pluots or pawpaws? No, then come and taste, there is something new for everyone. I tasted for the first time the lemon cucumber, feijoa (a hint: pineapple guava), and fresh, not dried date at the San Francisco Ferry Building farmers market. An unforgettable experience! 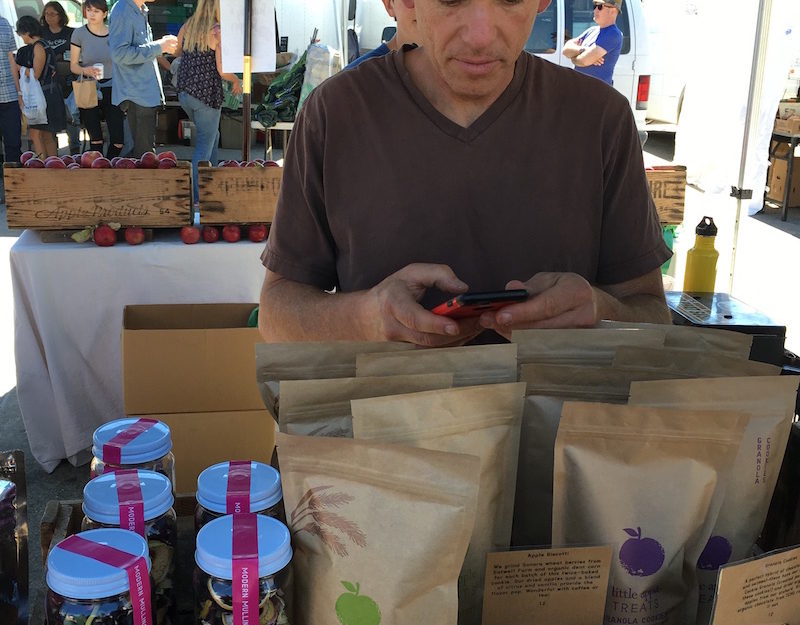 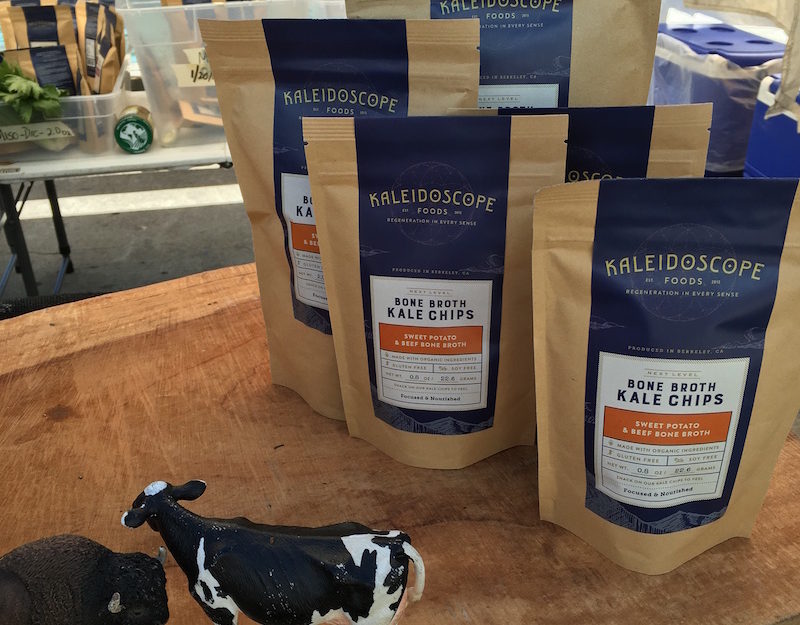 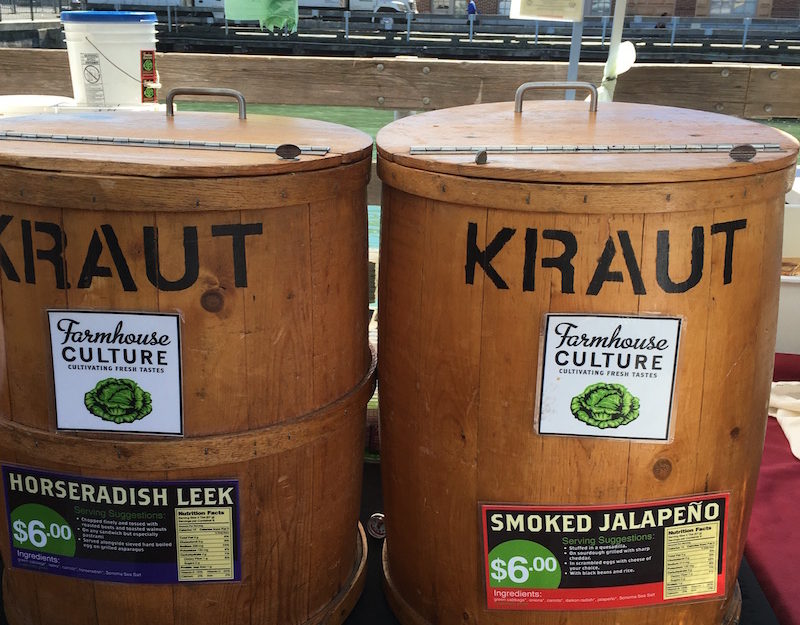 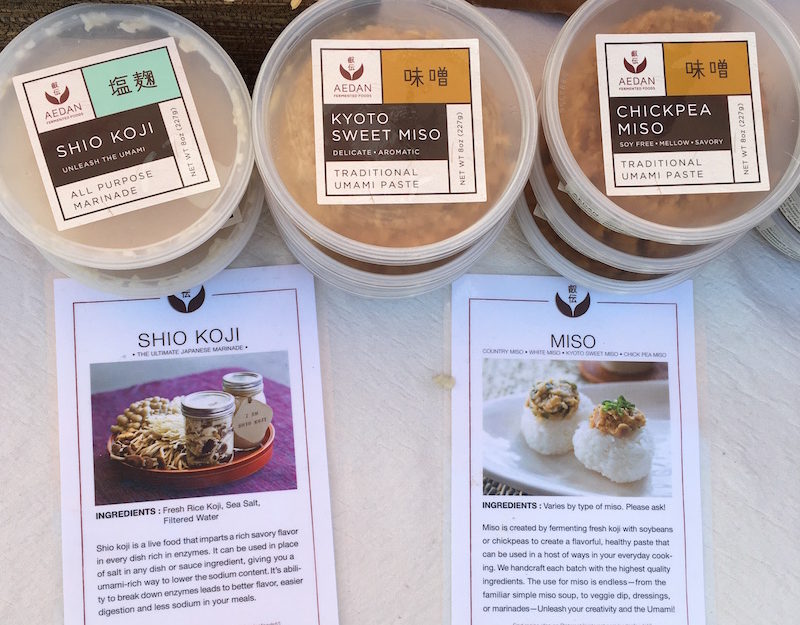 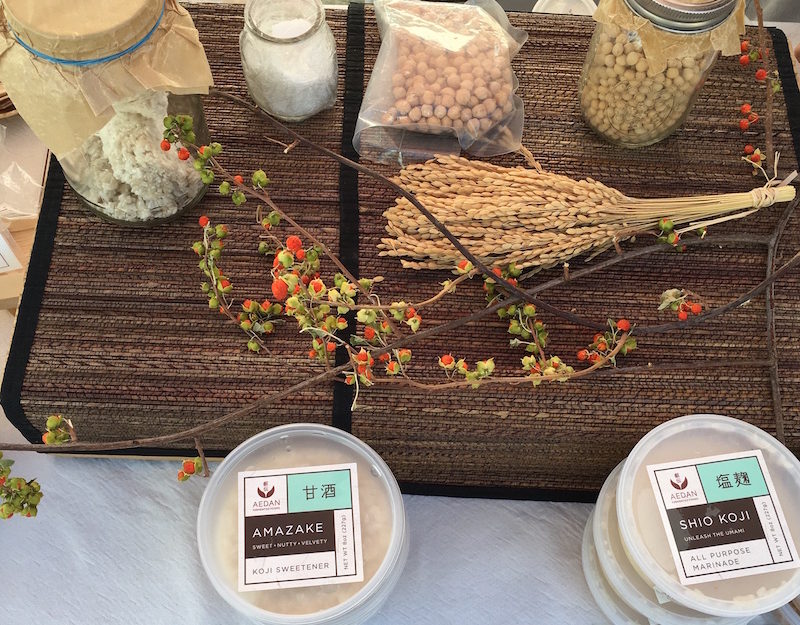 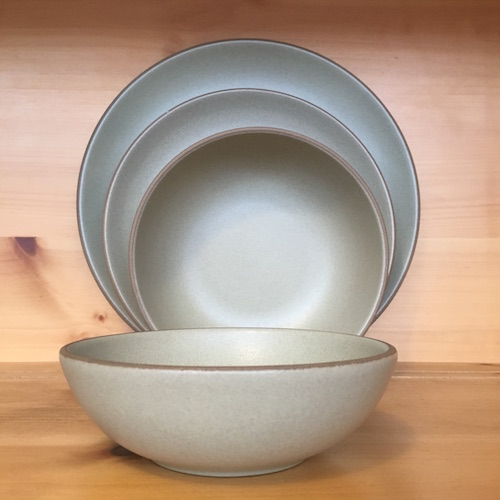 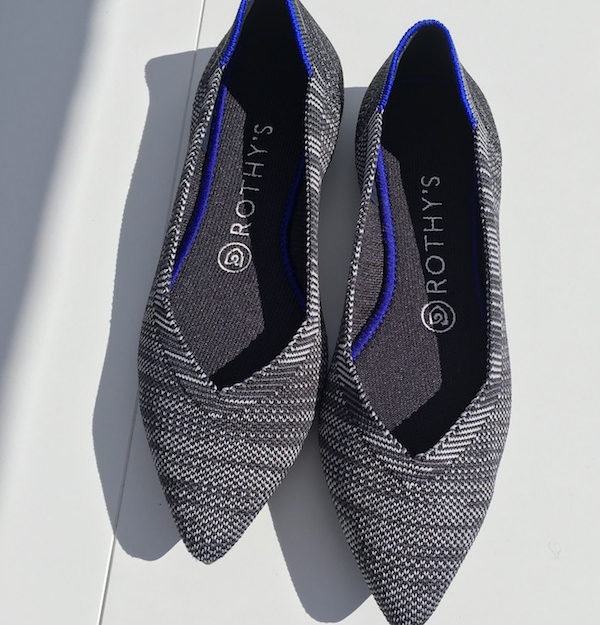 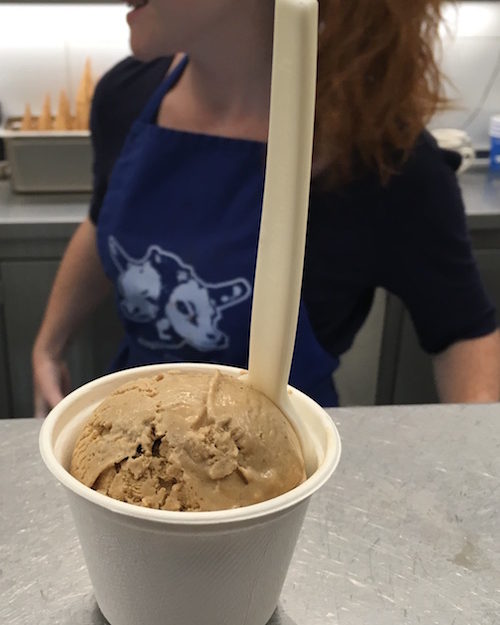 0
Your palate might be overwhelmed at the San Francisco Ferry Plaza farmers market, but do succumb to the Marine Gourmet samples of their Middle-eastern dips, such as the sumptuous Affi’s Baba Ghanoush of a fire-roasted eggplant with hummus. Try before you buy, I wish every town and city in the world had a market like this. From my foodies globetrotting, this was by far the best run and most culinary creative market I have visited beyond Japan. Europe has lots to learn.
To underline its sustainable mission, next to food the shoes knit from recycled water bottles by Rothy’s are being sold at the market. A bit too stiff for my comfort, but they supposedly, like your leather shoes, slightly give in over time. Flowers and plenty of ready to eat baked, warm, cold meals, oyster sandwiches, freshly made beverages and the San Francisco ultimate pick-me-up coffee will surely make you belly and mood swinging with joy.
The market runner also secures a well-priced “Veggie valet” parking for just $3 per day. Do not forget to validate your ticket with the info booth, after parking your vehicle inside the Golden Gateway Garage  One Maritime Plaza Building, 250 Clay Street, San Francisco. There is plenty of bicycle parking right in front of the market and public transport stops right in front, so your eco-conscious self can thrive in shopping for groceries at the San Francisco Ferry Plaza farmers market. I already miss it from Europe.
Ferry Plaza Building, crossing of the Embarcadero & Market Street, San Francisco
Tue & Thurs: 10am-2pm; Sat: 8am-2pm