Coming early is like waiting in a line with great food obsessed Tokyotes. A long string of foodies wanting it so badly that no matter if it snows, rains or the sun shines prudently, they stick to being organised, as if trying not to show their excitement over eating at Sushi Yasuda. And, it is exciting in spite of being simple!

After almost two decades serving traditional simple edo sushi to a gourmet tribe of purists, the bamboo-clad minimalist keeps ratings amongst the best sushi restaurants in New York. Sushi Yasuda has proven itself. In the city, where the new radiates trends while the long established becomes touristy or boring like another workout class, Sushi Yasuda has defeated the city’s stereotypes. 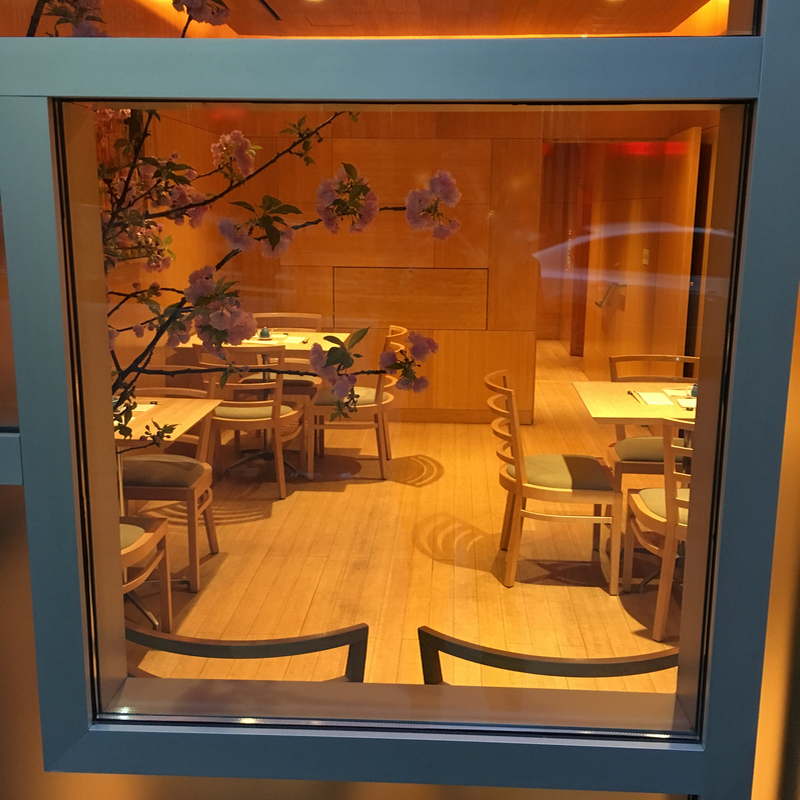 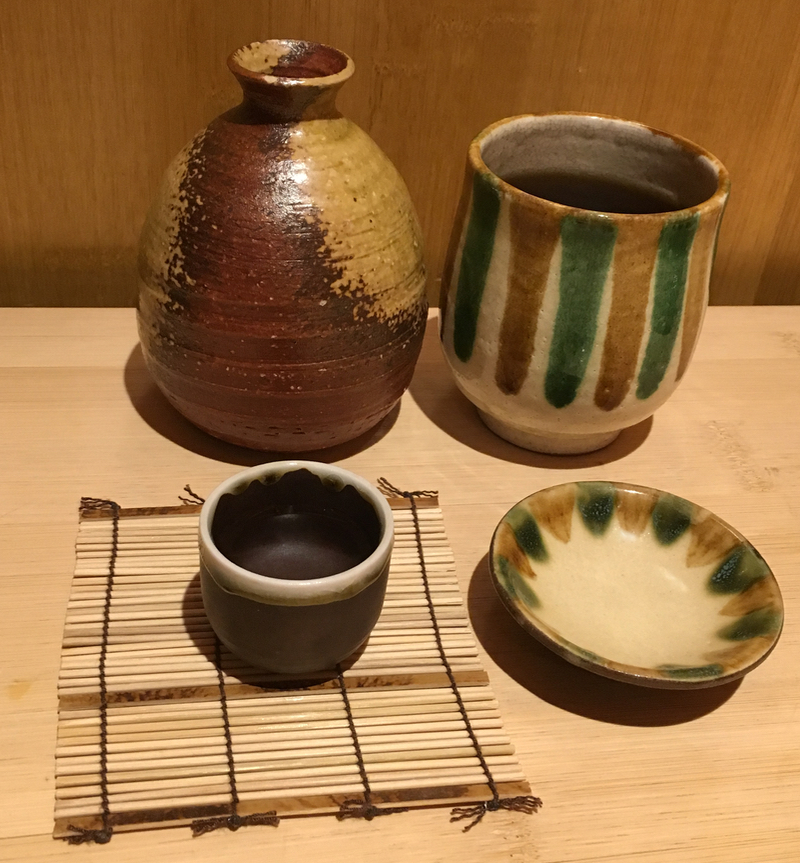 Here more than elsewhere, also the Zagat Guide wields a muscular arm over the sharp shoulders of the city’s diners. Yet, what’s great today, can wither tomorrow. The main cause of failure or decrease in a consistency at most New York restaurants is the manpower. The hungry employees and the cooks strive for as many big name restaurants on their resumes. After over a few years being impressed by the superb meals at Shuko, one of such sushi bars where the cooks follow the most favourable wind blowing into their backs, I was once again put down by not having had delivered the spotless rice and innovative flavour-bursting omakase sushi and rolls I was used to. The same happened a couple years before at Neta, the West Village sushi restaurant also headed by the same chef and owner Nick Kim, formerly of the ultra upscale Masa, where some of the chefs from Shuko came from.
Thanks god, Yasuda delivers. And, Zagat as well as the local top critics reward it with the higest scores. The bonus is that you do not need to keep the monastic solitude that used to be demanded by its founding chef Naomichi Yasuda. He went back to Tokyo to tend to his dream eight-seat sushi bar there in 2011. Most of the long-serving team including its current head chef Mitsuru Tamura continues the Michelin starred legacy of Sushi Yasuda in New York. 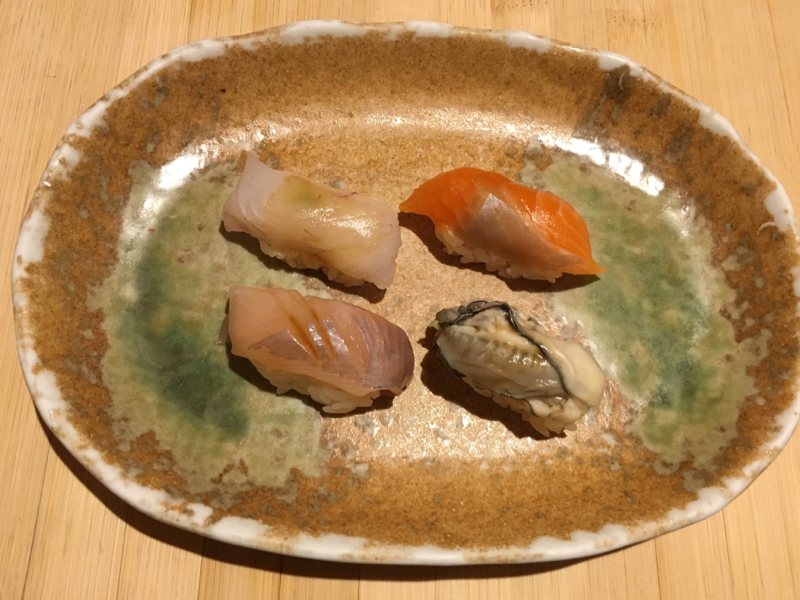 I am coming to Sushi Yasuda, a stalwart on the Manhattan Japanese dining scene, and I had to go twice within a week. Once for lunch, and later for a dinner. On either occasion I was able to snap a last minute seating. Both right at the dawn of the opening hour for the restaurant. Coming early is like waiting in a line with great food obsessed Tokyotes. A long string of foodies wanting it so badly that no matter if it snows, rains or the sun shines prudently, they stick to being organised, as if trying not to show their excitement over eating at Sushi Yasuda. And, it is exciting in spite of being simple!
If you have eaten at a good and proper sushi bar in Tokyo, you will understand and return when craving a slice of the Japanese perfectionism. You are personally ushered into one of the two bamboo-clad rooms, one private with its own entrance, and the other defined by a long sushi bar. There are a couple of small and larger family-style light wood tables in the main room too, and the Japanese families cover them well, at least during the earlier seating.
Dining at Sushi Yasuda is not about being hip and fashionable, like going to Nobu, Soto, 15West or Bar Masa, but it wields an authentic enchantment with tis food. With the spring crawling into the year, the cherry blossoms were blooming with their flamingo hued petals, ah beautiful! The manager and partner in the business Shige Akimoto spoke with a wide smile of a maître d’ as if we were his most regular customers, which we were not, yet. He was so welcoming that Yasuda has climbed on to my always-to-go-to list when visiting New York. Only Milos and Taim, an upscale Greek restaurant and a top scoring take-away vegetarian Mediterranean eatery, are so far on that list. 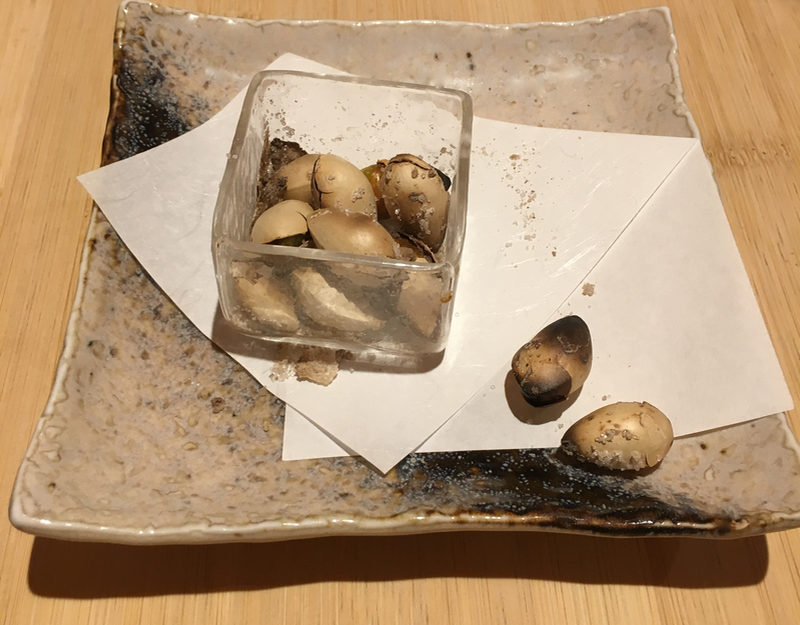 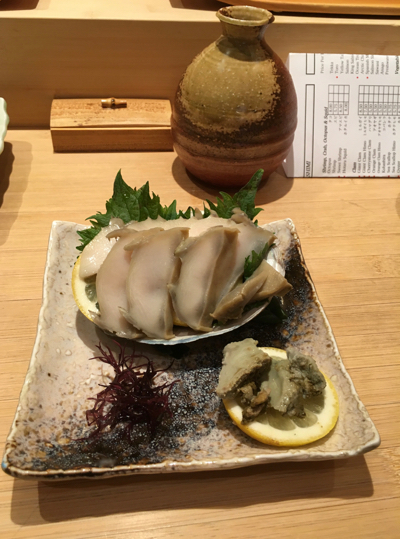 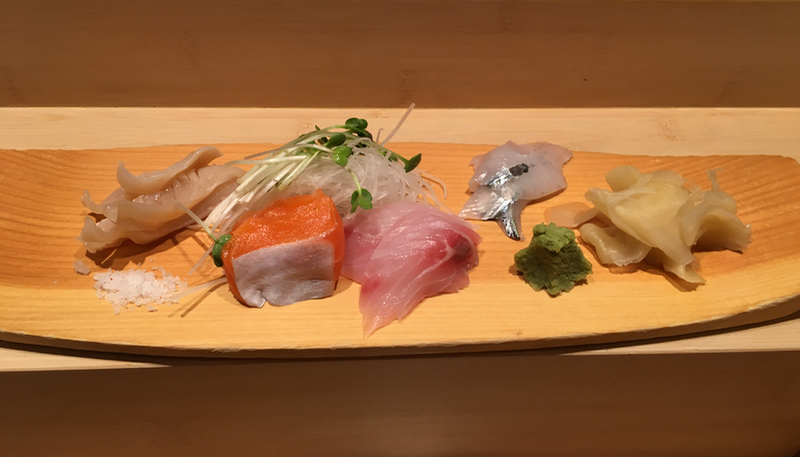 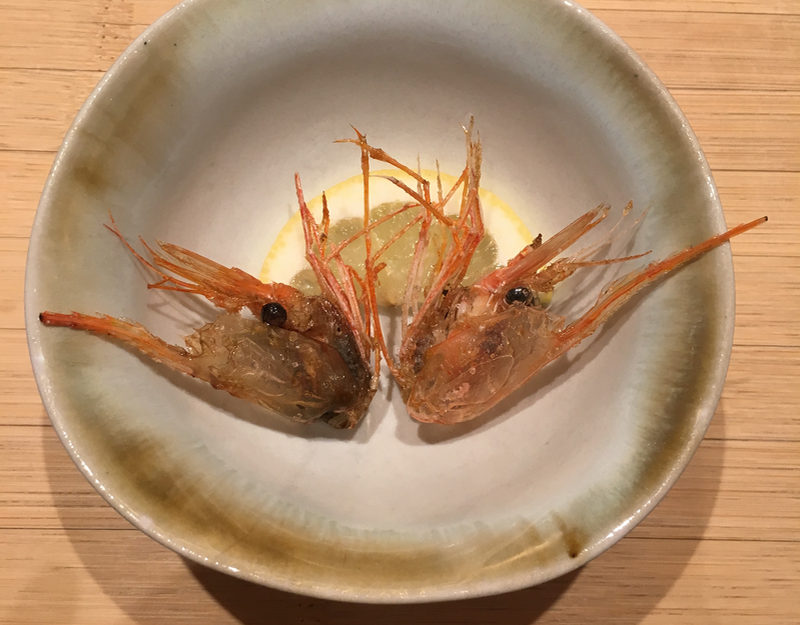 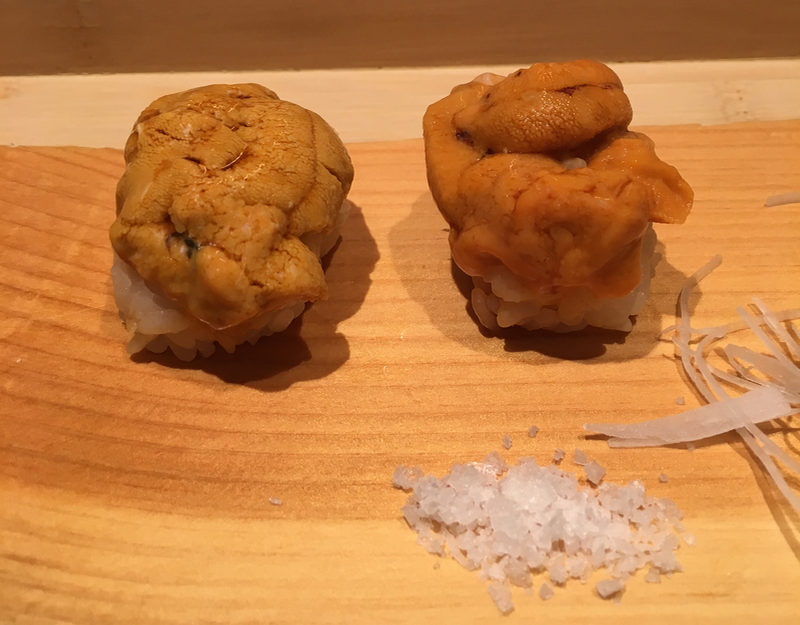 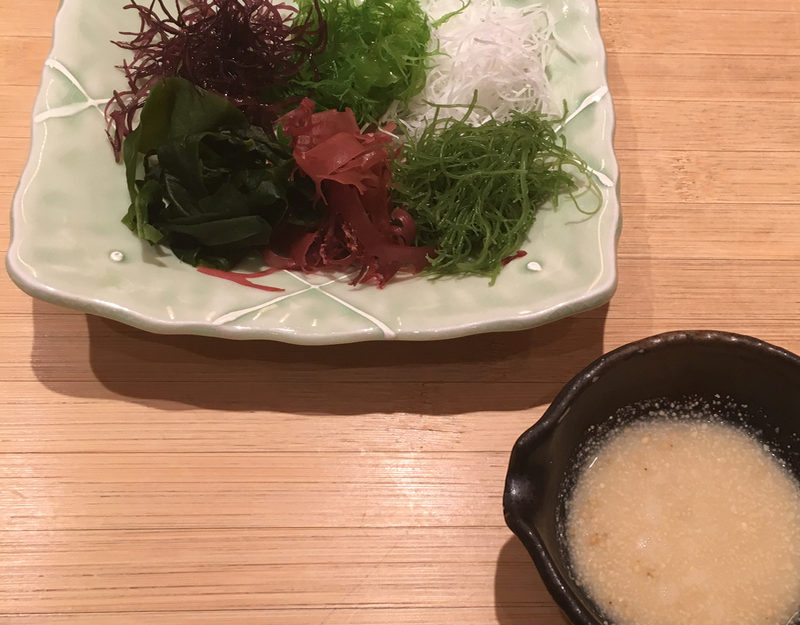 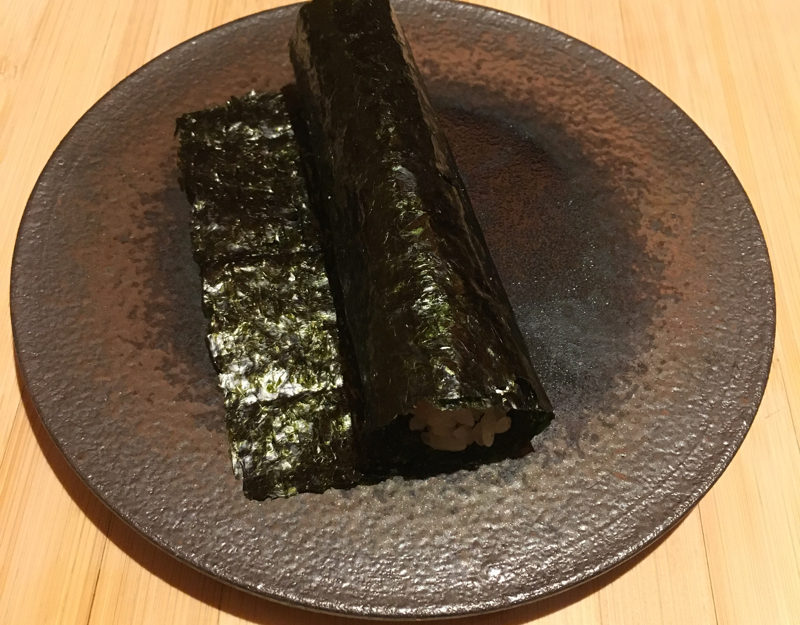 0
Next to the welcoming entree, some of the staff can be little confused if you haphazardly keep placing orders while eating. They try so hard to accommodate each desired morsel though so you cannot be upset about tgeir struggle. For me, the best is eating at the sushi bar, particularly if you are here for the sushi and sashimi or the chef’s choice, the omakase. Your chef will memorise the entire order, paying respect to the Japanese tradition. You get a list, tick the pieces you want, the starred items are daily recommendations by the chef that also generally appear in the omakase tasting. The printout is more for the table orders though. At the sushi bar you will get usually a plate of four, the sashimi first, then follows sushi for as long as you fancy, and finally an oder of egg custard or omelette, the tamago.
Beyond the edomaezushi nigiri and sashimi you can order from the kitchen some excellent starters, mostly warm dishes, daily special appetisers, and tempting desserts.

Nibbling on pan-roasted ginkgo nuts while sipping sake is a good start. The choice of cold and warm sake is good, there are also some wines, spirits, and the house sencha or houjicha tea. If you like abalone and can afford it, get it. The Awabi No Sakamushi of sliced and in sake steamed sea creature is served on a slice if lemon and with a side of its richness delivering liver, impeccable. Like marinated porcini mushrooms, just with a bit more crunch.  The umami rich miso soups are extremely satisfying. I enjoyed the red miso with mushrooms on a cold day wholeheartedly. The biodiverse and colourful seaweed salad was served with my favourite creamy sesame dressing. 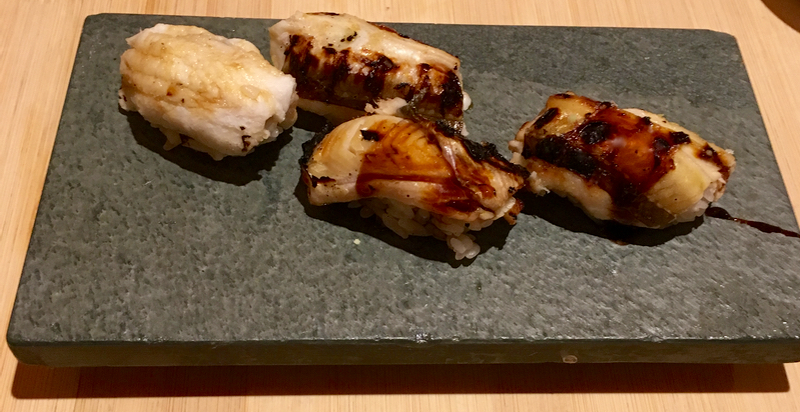 Now, comes the sushi. The rice is sweet, moist, but not too much, and it can fell apart if you soak it in the soy sauce for too long. The chef has warned you! No dipping too much. Besides, you really do not need the sauce at all for most pieces. The ginger is pungent, fresh, probably pickled in-house. Adding the freshly grated wasabi into your soy sauce is not that important for the chef Yasuda also discourages from it. A great fish can stand alone, supported only by the soft sushi rice. Lighter white fish like fluke, amberjack (yellow tail), the young hamachi, clams, the superb oyster, or the sweet sublime shrimp (ebi) are ideal start. The heads of the shrimps are being served deep fried later on a separate plate. I love them, please, dare! My other favourites that were served recently as sushi are: Arctic char, New Zealand King Salmon, Icelandic Ocean Trout, Rainbow Trout, the silver skinned Sayori (Halfbeak), and the eel, oh that simmered fresh white sea eel (sawani) – I will have it twice, please. The anago or dark sea eel is also nice. The only piece I was slightly disappointed by was the toro tuna hand-roll with scallion. The nori wrap was perfectly crisp, but there was not much tuna inside the temaki. There are also vegetarian rolls. Kaiware, the young daikon shoots, kanpyo or dried gourd, kappa, the lightly pickled cucumber, ume, which is a savoury Japanese apricot not plum as is often mistaken, takuwan, which is pickled daikon, yamagobo, the grated gobo, and for the very adventurous foodies the fermented and stinky natto tofu.
Stripped of the common nori wrap around the uni, the wobbly and unctuously satisfying contents of a sea urchin which is one of the most sustainable seafoods still inhabiting our oceans in great numbers, it is all about the natural falvor. It can get quite messy, but if you softly lift the rice bun with your chopsticks or grab it gently straight with your cleaned fingers (the wet napkin on the table is refreshed as often as you ask for) you will lick your fingers with delight. The more subtle Japanese uni from Hokkaido can cost double the lush Califonia uni, and they are interesting to compare. 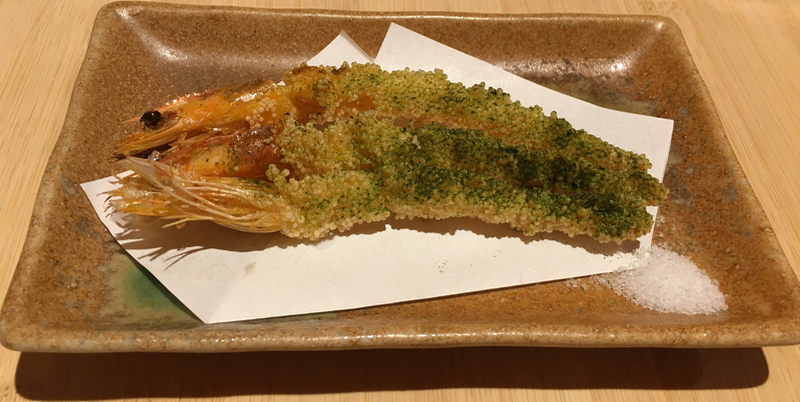 On a recent evening, there were prawns crusted in quinoa with matcha powder. The tempura style was so well done that you could eat the heads of the prawns. I did, since I know from experience how delicious the crunchy heads are! Seasoned sushi eaters like myself, who pay a regular pilgrimage to Japan, are more open than most occasional sushi eating Westerners. My German friend grimaced her face with disgust when I teased her to eat her prawn head, while my Romanian friend was not as keen on the abalone. Perhaps if I told her that these were porcini mushrooms, she would have another piece? I wonder. Well, my husband ate it all as usually with a great sushi. 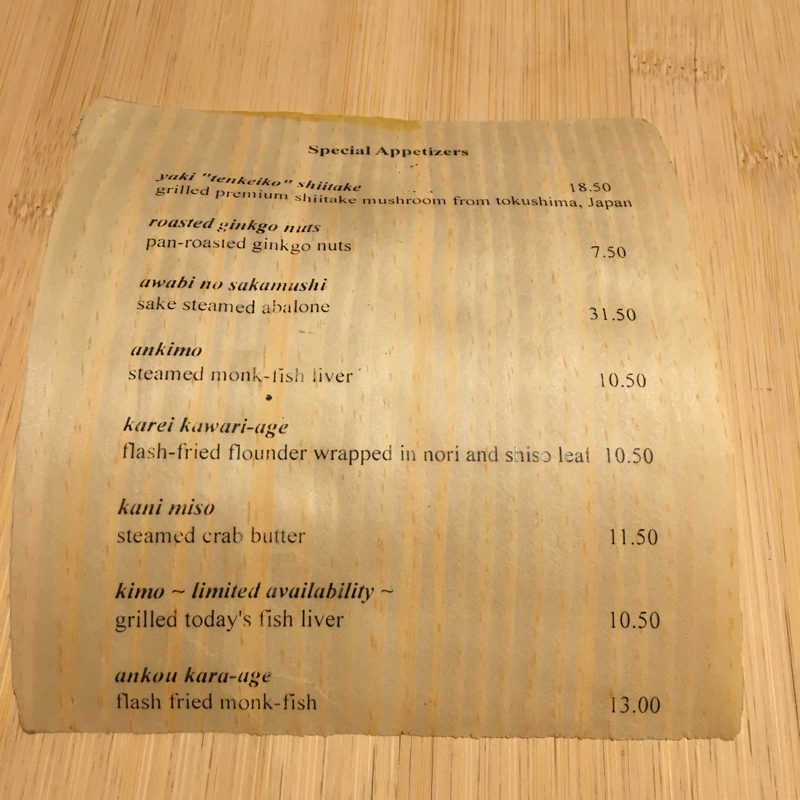 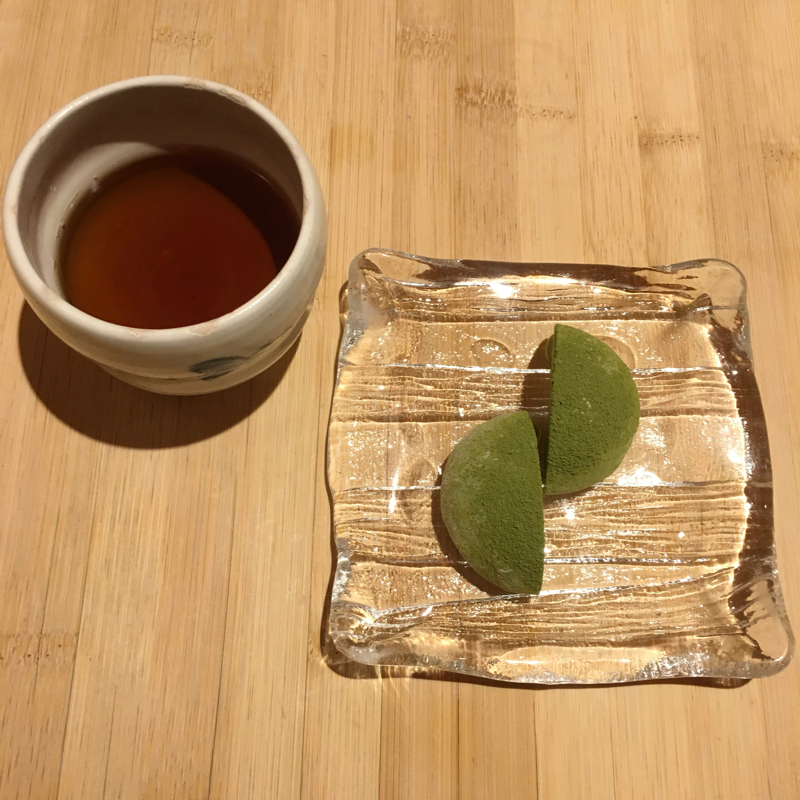 The desserts are quite small. At lunch a trio of businessmen sitting next to us savoured the ice cream, but for us it was too cold on that day. Yet, next time I tried the house-made mochi, the frozen but soft rice dough based dumplings filled with an ice-cream [we had a choice from matcha, bean, or vanilla flavours]. They were nice, not the best I have had, but delightful with the cup of roasted houjicha tea that we received with compliments from the restaurant. You will pay a full price for the authentic experience at Sushi Yasuda, but top quality fish and seafood fetch record prices, and here you will get the best possible cuts in New York. Perhaps only Le Bernardin, for years Manhattan’s favourite restaurant can boost with a comparable fish quality.
US: 204 East 43rd Street, Manhattan, New York;
Japan: 4 chome 2-6 Minamiaoyama Bldg 426, B1, Minato-ku, Tokyo
Lunch: Monday – Friday: noon – 2:15 p.m.
• Dinner: Monday – Saturday, 6:00 – 10:00 p.m.
• Closed on Sundays and US national holidays
+1 212.972.1001 ; Tokyo, Japan: +81 3 6447 0232