Traditional Japanese manners grace Nobu as he often greets the customers at Matsuhisa in Los Angeles. His second branch in Aspen, as excellent as his LA firstborn, was the last Nobu namesake that strayed away from commercialisation.

Chef Nobuyuki Matsuhisa is worldly known as Nobu, the legend of contemporary Japanese cooking blending Peruvian and other elements into his special sharing plates. Swiping the globe with his nikkei cuisine from New York, London, Dubai to Hong Kong, chef Matsuhisa most effectively blended his Japanese skills with the alluring ingredients that he found during his stint in Peru over 20 years ago. 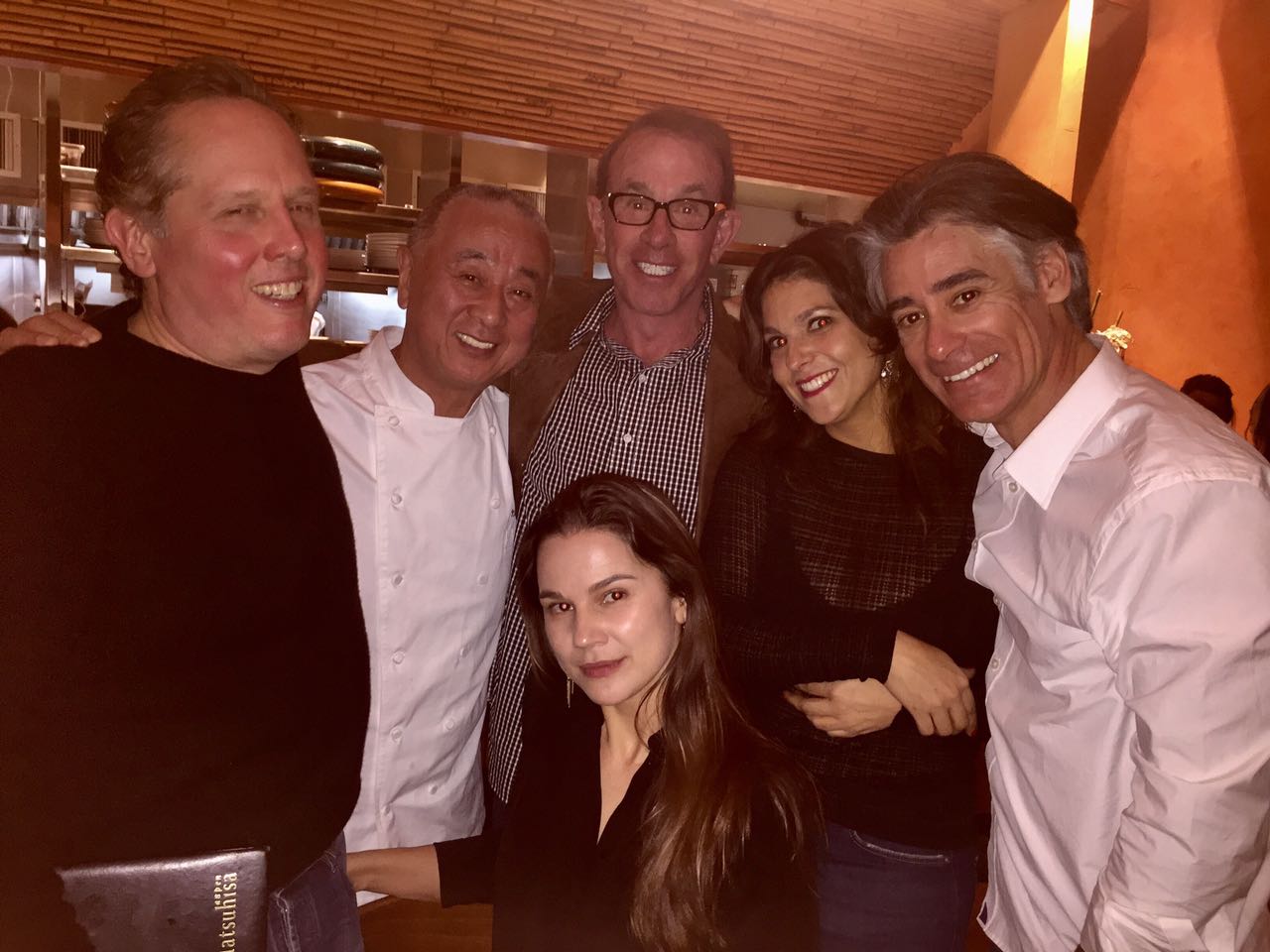 Nobu’s partnership with the actor Robert De Niro and restaurateur Drew Nieporent gave birth to the international network of the chic Nobu restaurants. Nevertheless, his namesake Matsuhisa restaurants remain his most cherished babies, so he shows up often. I have repeatedly dined at Matsuhisa in Aspen, Los Angeles, Paris and St Moritz, and while the first two are the most Nobu style, the newest Paris location is by far the best. The main reason being that the executive chef Hideki Endo was given a free reign from Nobu Matsuhisa and creates sublime, Michelin stars deserving plates in the chicest atmosphere of the Royal Monceau hotel. Chef Hideki, originally from Hokkaido, has helmed the scenic Hong Kong Nobu for over a decade, and moved to Paris to open the by celebrities touted Matsuhisa Paris. 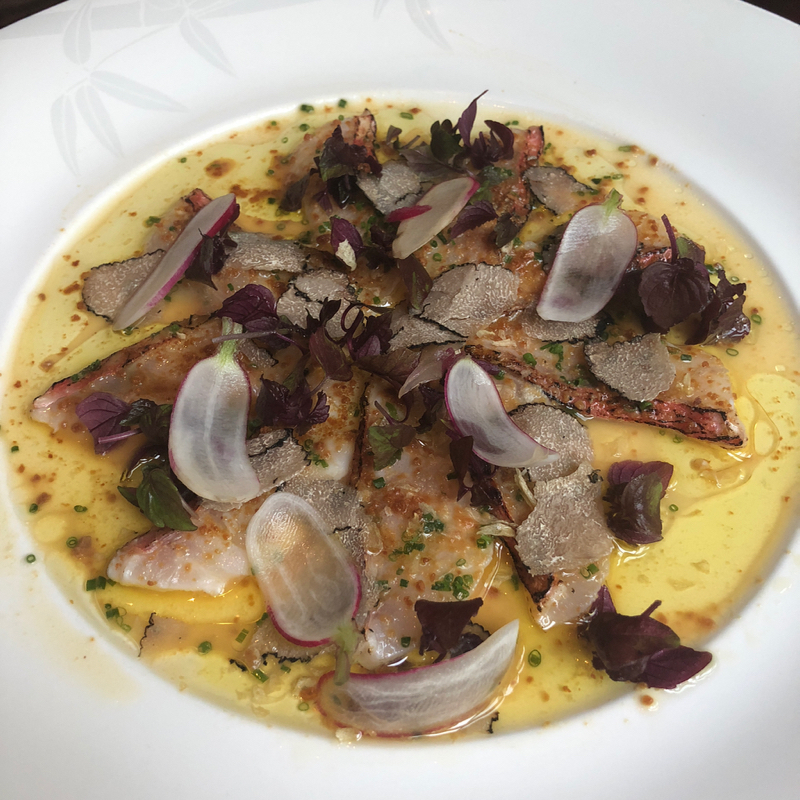 Traditional Japanese manners grace Nobu and his wife as either of them often greet the customers in the first ever Matsuhisa restaurant in Los Angeles. The local glam-set still frequents the causal restaurant after almost two decades in business. Whether you are a Hollywood star or just a devote fan of his cuisine, Nobu shares his humble smile and a gentle handshake as he strolls around. 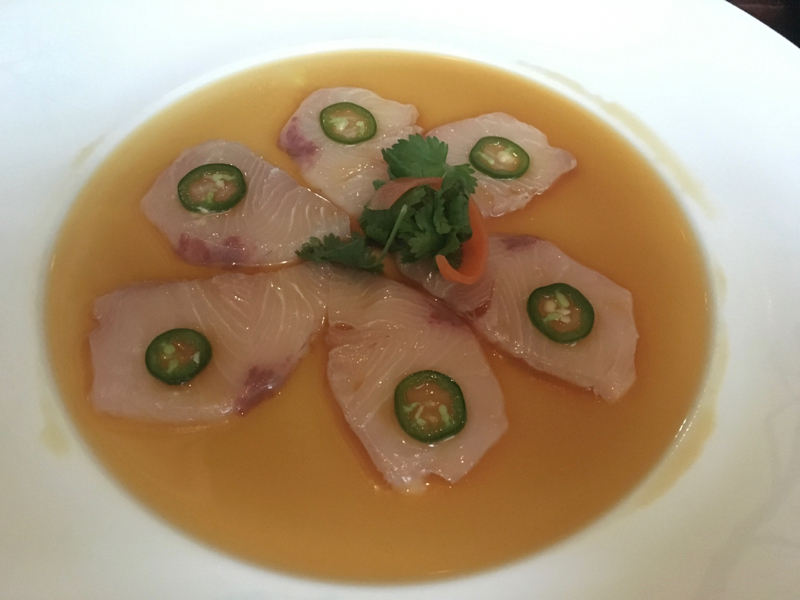 His second branch in Aspen, as excellent and casual as his La La Land firstborn, was the last that strayed away from the overt commercialisation that swoop the intimate charm away from the Nobus, and his growing suite of Matsuhisa restaurants (Athens riviera, Mykonos, St. Moritz, Paris). Much larger than its LA base, Matsu in Aspen further accommodates two bars. One for casual eats upstairs and the other just by the entrance downstairs. In embracing the essential American flare, large Tv screens in the bar area lure in the football and cricket fans to virtually coach their teams. A spectacle in itself as you walk in. Like in an orchestra, these conductors with chopsticks instead of a baton indulge in a decadent meal. Some locals just pop in for a bottle of Asahi beer and a snack (like the crunchy crab tempura salad, the beef or fish tacos), yet the food’s quality would satisfy an Arab sheikh. Being the most fashionable and for almost two decades the most popular restaurant in Aspen, while keeping its informal allure, make Matsuhisa tirelessly attractive. In Aspen, young folks with sometimes ridiculously weird ski hats mingle with the mature, fur-adorned bejewelled ladies, older couples and families enjoy their meal, all naturally sinking into the buzzing atmosphere. Booking ahead is highly advised. 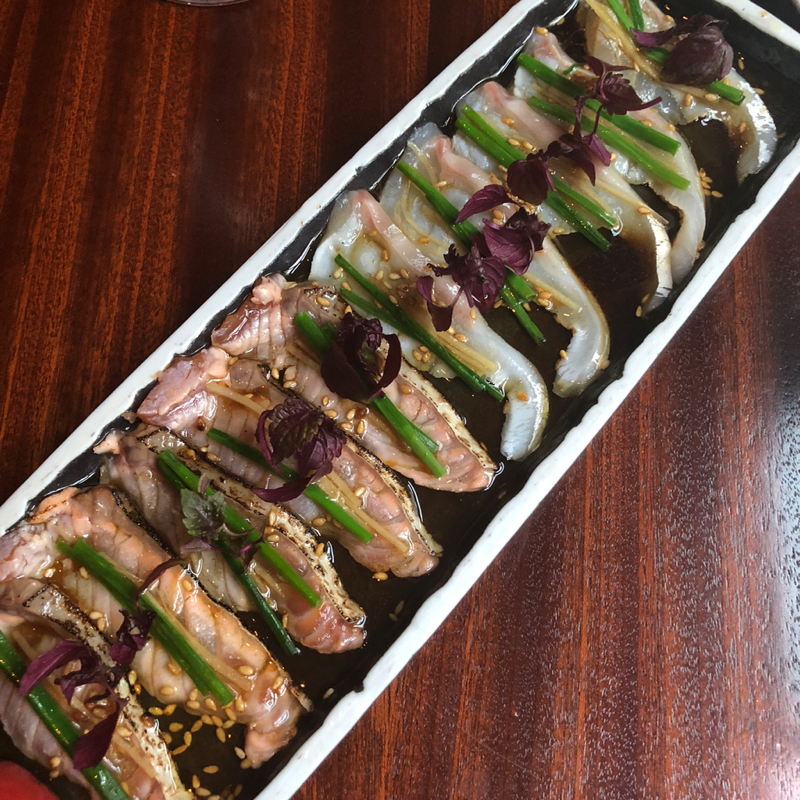 Nobu is about his inventive dishes and not the classic simple sushi and maki cuts. His bold, creative and high taste-profile flatters to the salt and rich flavours accustomed American diners. In St Moritz, the food is more subdued and does not show the full spectrum of his special plates as the Aspen and LA Matsuhisa do. Also there his is creative cooking mastery and the accent on top quality fresh ingredients show off at his namesake US based restaurants most vibrantly. Like a rainbow, Nobu’s dishes cover the flavours and textures from delicate and light to deep, rich and intensely accented plates. It is wise to start light and move to the heavier or more seasoned dishes, so your taste buds detect the suppleness of the delicate fish and seafood creations such as the refreshing Peruvian style tiraditos (which Nobu learned when cooking in Lima), crab tacos or the new style yellowtail sashimi with jalapeños. The spaghetti-like shaved Hearts of palm salad with lobster and Nobu’s special savoury dry miso crumble is excellent to share at the beginning. You can buy this superb condiment at both restaurants, and use it at home over anything craving its umami flavour. The superb King crab tempura salad with red onions marinated in spicy vinaigrette is refreshingly touched up with coriander. 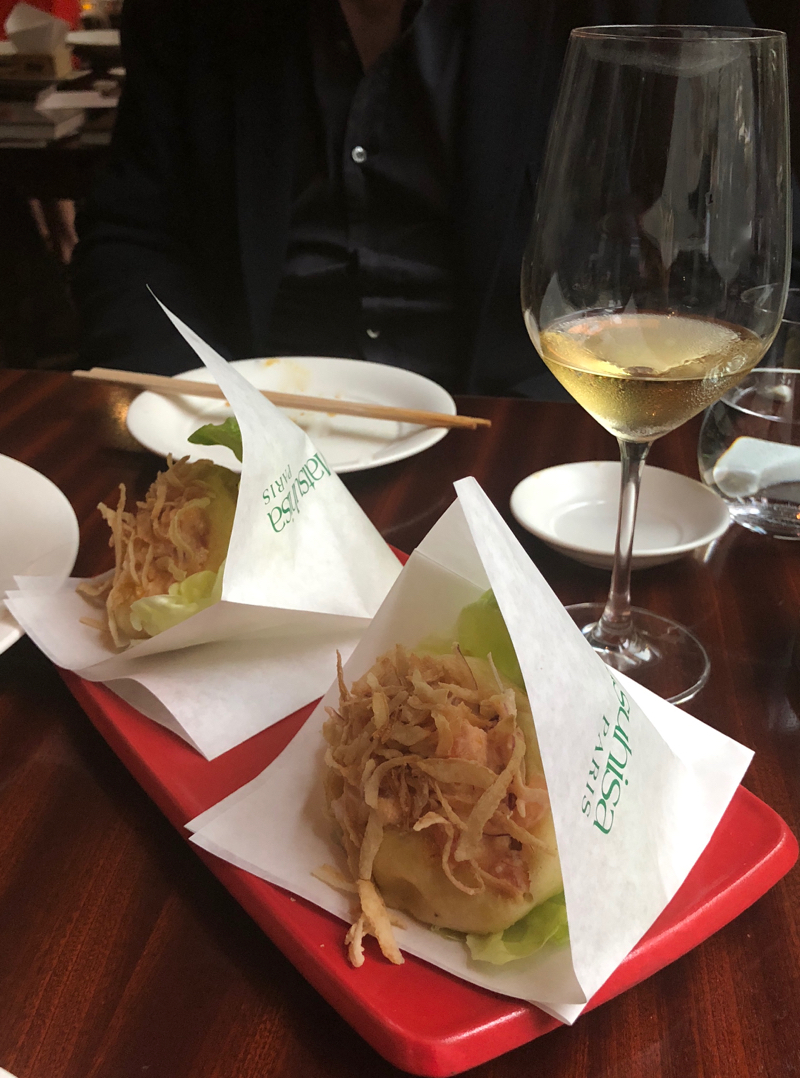 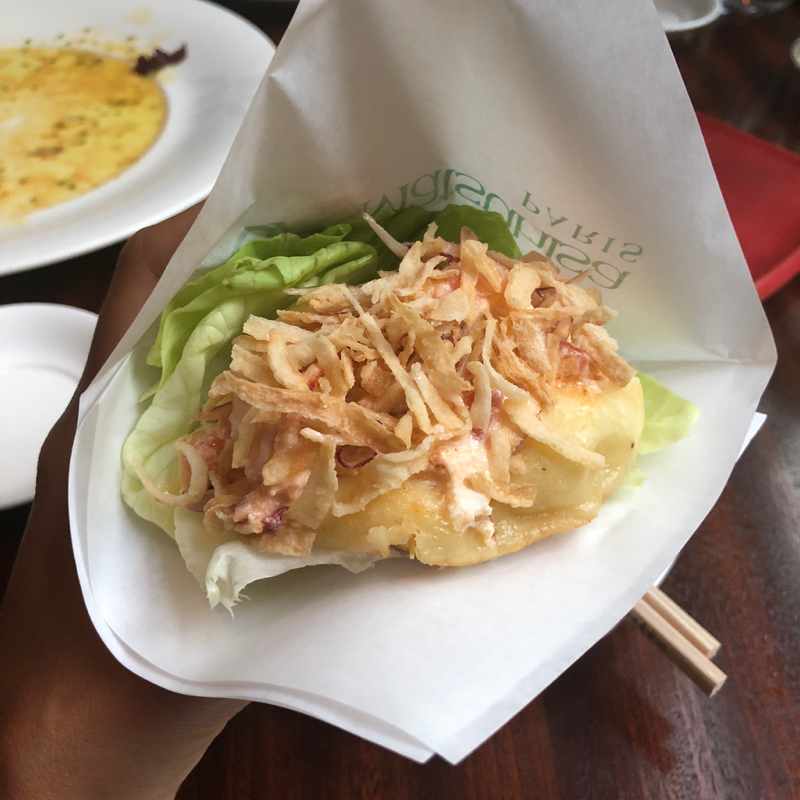 The superbly trained staff usually brings them in an appropriate sequence, which is essential for the enjoyment. Since the fish is marinated in an oil-based sauce with sesame most of the New style sashimis are moving towards the richer side, therefore it is better to get them after the simpler lime and lemon-based plates like Tomato ceviche or the seafood tiraditos. My favourite is the New style salmon sashimi. The fatty and smooth salmon goes hand in hand with the oily sauce drizzled with chopped green chives. The abalone, a rare type of sea shell, is always very expensive whether you order it in Japan, China or in Colorado. If you can afford to treat yourself to something very special, inquire whether the lucky day shipped some of these porcini textured sea wonders. Served broiled, they impress. Usually only in the US Matsuhisa.

Matsuhisa does wonders with mushrooms. At Nobu as well as at ‘Matsu’ I usually order the sizzling hot Mushroom tobanyaki, but in Aspen, I also like the unique warm Mushroom salad with lobster. These forest gems top up even the flavour and texture of the Maine lobster, but still this plate is a wonderful marriage between Western and Eastern ingredients. I highlighted my personal bests at ‘Matsu’, although I have eaten almost the entire menu a number of times and enjoyed most, so go for it. 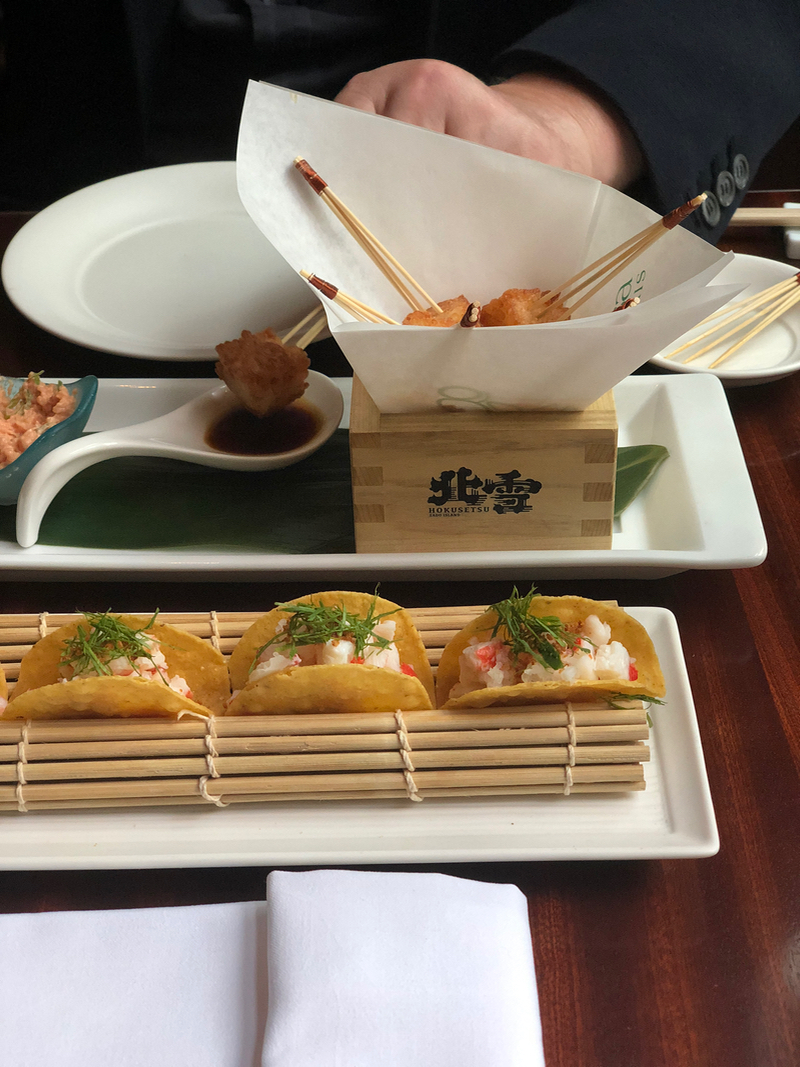 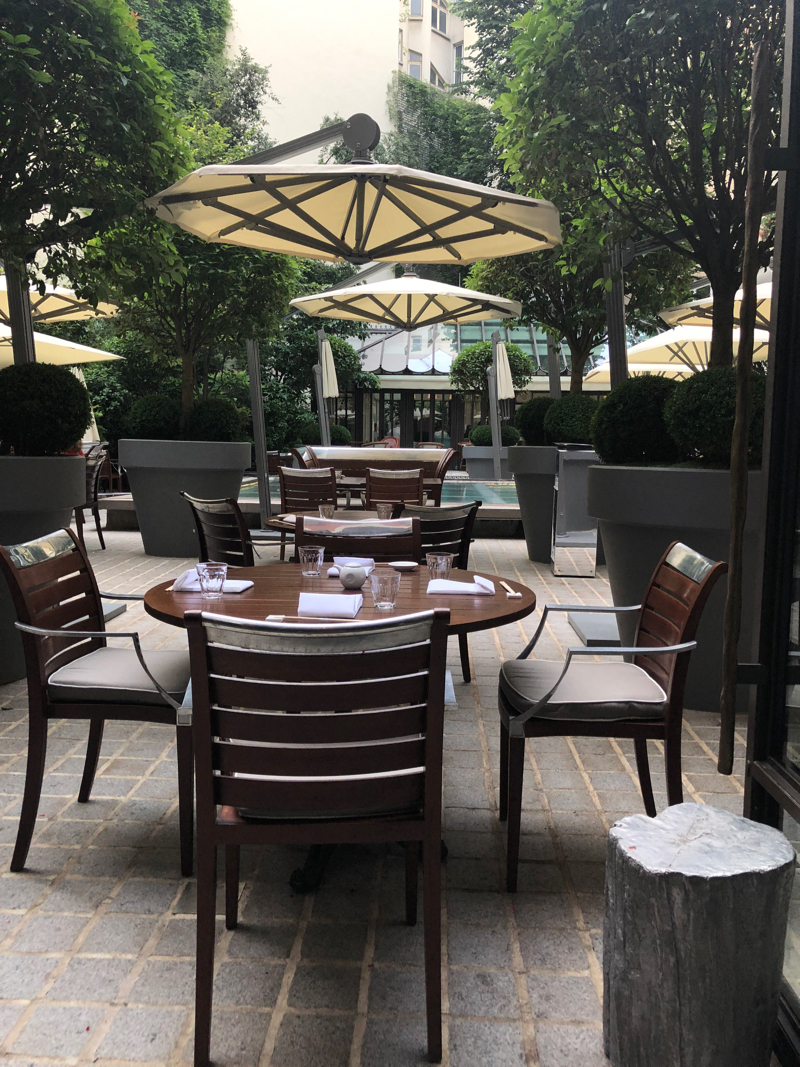 From the Japanese sweets try the Shaved ice or the Mochi ice cream. These gooey, thin, dumpling-like rice flour buns filled with ice cream are homemade. You can select from multiple flavours. The green tea and vanilla never disappoint, but chocolate or li-chi may seduce too.
Drinks: The wine list at Aspen Matsuhisa has the widest selection of wines that go well with this style of food. To stay local at least with the wine, we usually go for a bold California Chardonnay. A refreshing dry white wine with a higher acidity like Riesling would be my top choice, but a lush white Bordeaux, Rhône’s Rousanne and Marsanne blend or a mineral slightly oaky California Chardonnay like from Aubert de Villaine’s Aubert (DRC winemaker) or Littorai suit to most of the fish and seafood Nobu dishes. Pinot Noir works well too. Williams Selyem are a great bet if you are willing to spend a couple hundred dollars. Their Chardonnay from the Heintz Vineyard (not to be mistaken for the Heitz Cellars in Napa Valley) ages gracefully so if you see an older vintage, try. In St Moritz, the impressive wine cellar is shared with the Badrutt’s Palace Hotel luxurious restaurants, and there are many great European wines on the list. Here, try the local impressive Pinot Noir Monolith by Obrecht, very savoury and not too fruity like most Swiss Pinots. In Paris French bottles impress, usually we go for white Alsace (Riesling Clos Ste Hune) and red Côte Rotie or Burgundy.

At the Los Angeles Matsuhisa the wine options are more limited so we often get a bottle of Kistler Chardonnay that is creamy, rich, yet balanced with a good acidity and a long, tremendous aftertaste. Beer or sake are popular choices and there is a very good selection from Japanese, American as well as European brews. Not in the mood for alcohol? The Nobu’s own Japanese green tea, which you can also buy, is very good and its youth-prolonging antioxidants refresh and relax at the same time. Magic, isn’t it?
I have dined at the Matsuhisa in LA regularly for over a decade and in winter Aspen each February. I am grateful for so many years of consistent pleasure there. Arigato! Sadly the same cannot be claimed about the Athens and St Moritz locations.