Barely touched nature in the three star restaurant by Alain Ducasse’s team at the Plaza Athénée hotel in Paris puts more sustainable dining on the luxurious plate. After a major refurbishment and concept change, Ducasse stars vegetables with a millennial touch at the eponymous Paris hotel. Like some of his three Michelin stared French colleagues, from Michel Guérard in the Landes, one of his culinary teachers, through the Paris-based Alain Passard, Ducasse also introduced his lighter culinary oeuvre in his vegetable and seafood centric tasting menu at the Plaza Athénée. 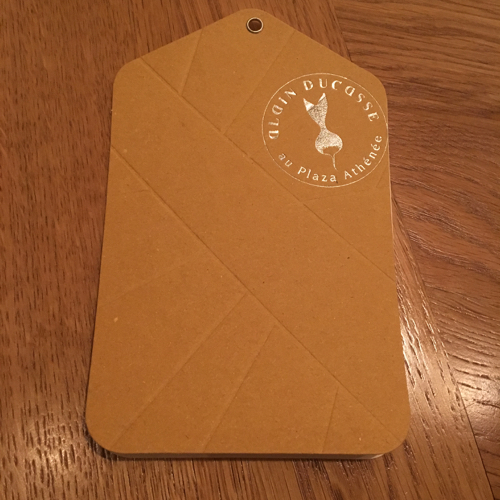 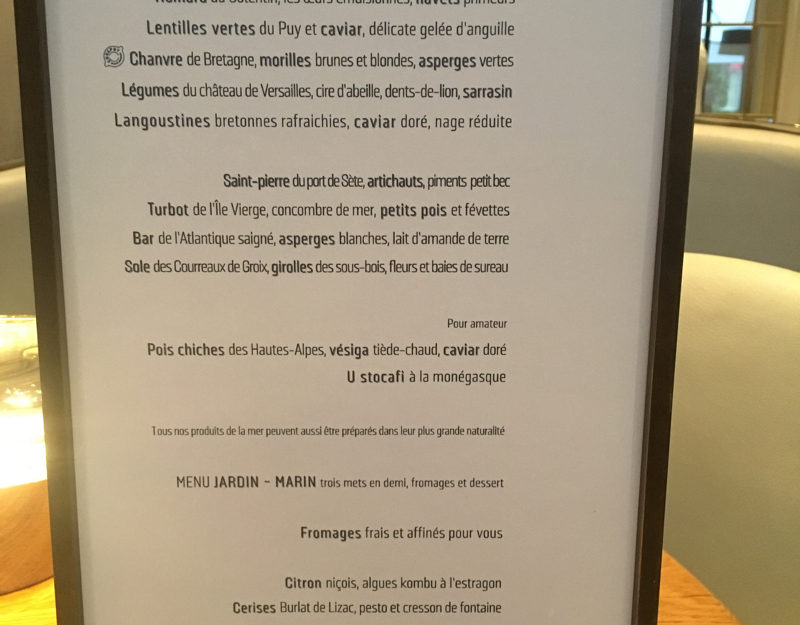 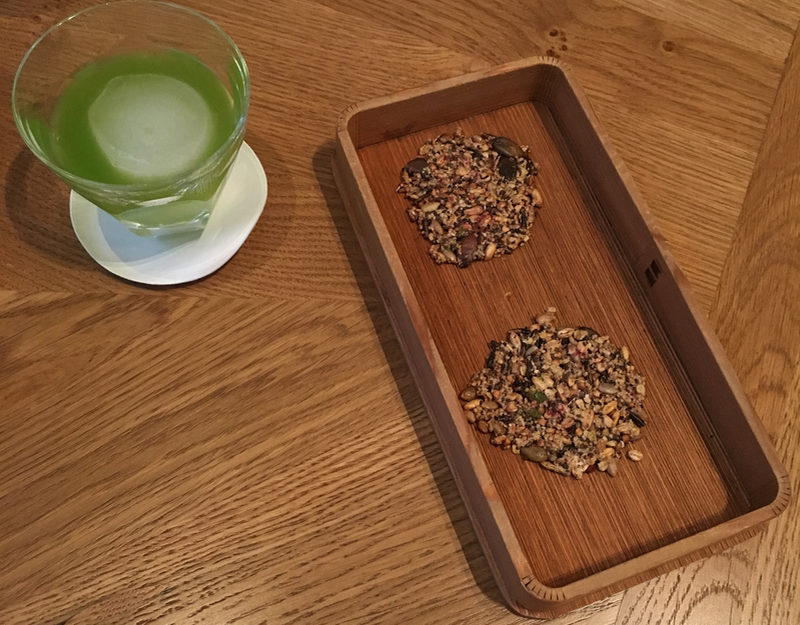 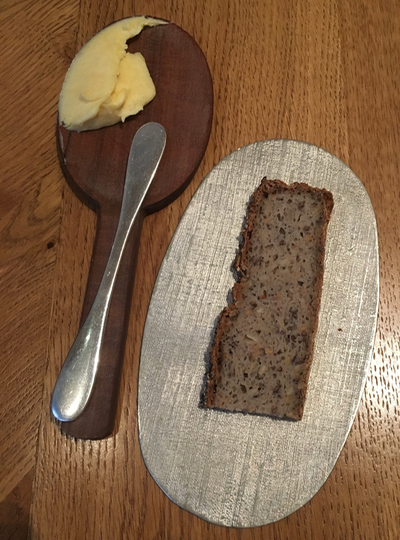 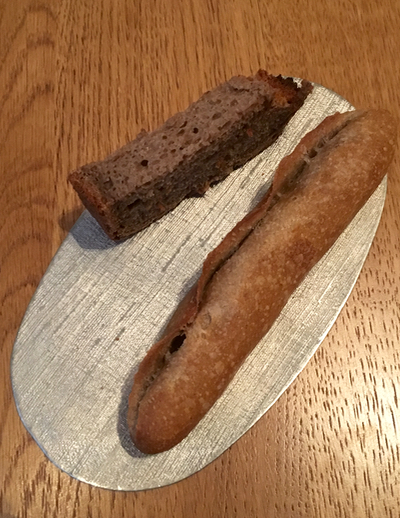 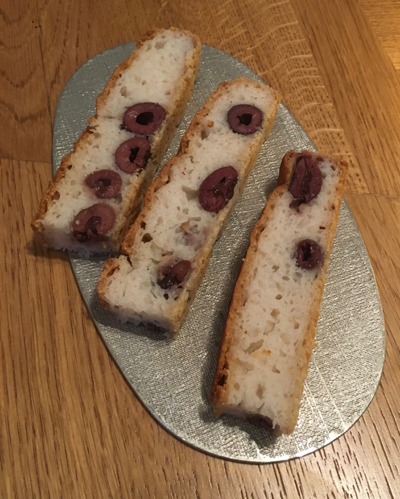 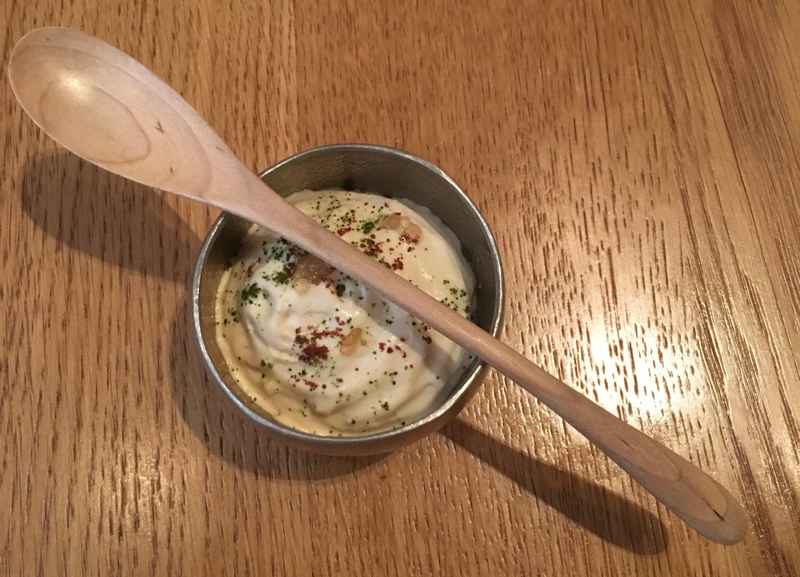 Naturalness, the “natural character of an element belonging to nature” conducts the subtle preparations that humbly respect the raw product. Created by Pierre Tachon, a cross between a fish and radish, the logo of the restaurant seals the veggie-focused deal.

The naturalist, vegetables celebrating menu is different from Passard’s more rustic take in his vegetarian tasting at L’Arpège. Ducasse’s take is more luxurious and attuned to the current tastes. Yet, at the Plaza Athénée restaurant, the chef redefines luxury.
Like at London’s Fera, no table clothes hide the artisan polished oak wood shining just under the fine porcelain and French earthenware introduced in sequential pampering by the waiters to entertain your palate. Passard’s organic gardens in the Eure and Sarthe regions have for decades supplied his menus, yet Alain Ducasse at Plaza Athénée sources from the royal soil at the Château de Versailles! A magic stroke of marketing genie for the chef, sure, but the produce is superior to an average potager.

At the former Marie Antoinette’s retreat Trianon and Grand Parc de Versailles, the vegetables are biodynamically farmed at one of the three gardens by Alain Baraton. Originally, these gardens were commissioned by the Queen to imitate the French village lifestyle. Highlighting the farmers and fishermen’s produce, the MENU GARDEN ~ MARINE consists of three half dishes, cheeses and dessert. Some are vegetarian plates in their nature, but mentioning any dietary restrictions is highly advisable since bacon is Ducasse’s go to seasoning for vegetables and wild, sustainably caught seafood is included in this sea meets the soil menu. For €390 this is a festive epicurean journey.

The menu is presented only in French, but online you can find some hints. Still, daily, small adjustments introduce surprise dishes, so let it flow, but any request will be accommodated, including gluten-free pastry and purely vegetarian meals.

Dining at the Plaza Athénée on the World Environment Day, I went for a purely vegetarian tasting menu. Handpicked from the regular offerings, I started with delicately cooked seasonal Vegetables from Château de Versailles, beeswax, dandelion, buckwheat and continued with Hemp seeds, brown and blond morels and green asparagus cooked in Ducasse’s signature ceramic “cookpot” with a creamy morel sauce poured over to finish on the table, like the other most broth or saucy dishes. The best though came in-between. An off the menu vegetarian course of Primeurs of green peas and broad beans in “cassolette” with romaine lettuce velouté (velvety butter, flour and stock sauce). So satisfying, intensely concentrated, crisp green yet mouth filling with oomph creaminess – perfectly balanced. 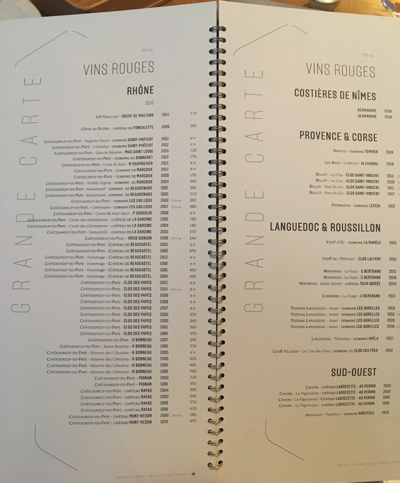 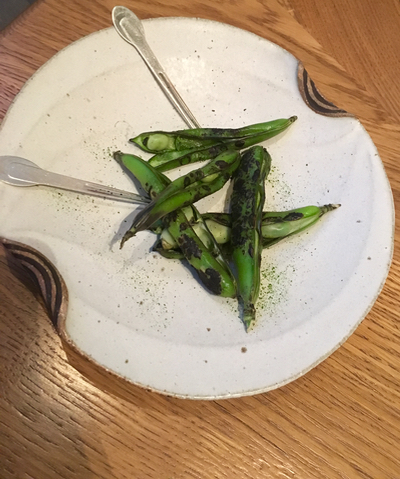 If the rare La Bonnotte de Noirmoutier young potatoes appear on the menu (between 7th and 20th May), they are a must order. This delicate, hand-picked varietal is not just the most expensive potato cultivated today, but the fresh chestnut resembling round tuber was for the first time grown outside the famed French island in the Versailles gardens for Ducasse at Plaza Athénée. Not all is grown there though. The Puy lentils and other coveted French legumes, citruses, Hautes-Pyrénées peanuts and grains may grace the menu. The unexpected combination of Volcanic hill green lentils with a smooth farmed Chinese caviar by Kaviari, highlighted simplicity of the lentils converging in a sublime unison with the precious caviar. For self-defined gourmets the hand-picked Chickpeas form Hautes-Alpes mountains, sturgeon marrow bone and golden caviar.

Tanahashi-san, a shojin cooking specialist (shojin ryori is vegan cooking in traditional Buddhist temples in Japan) consulted for Alain Ducasse, who confessed in an interview with Laurent del Porte: “before the chef, there was nature. It’s nature that dictates the menus, and the talent of the chef consists in a form of self-effacement in order to exalt the true taste of what nature intended to give us. “ Such are the words of the mature and well-respected chef. 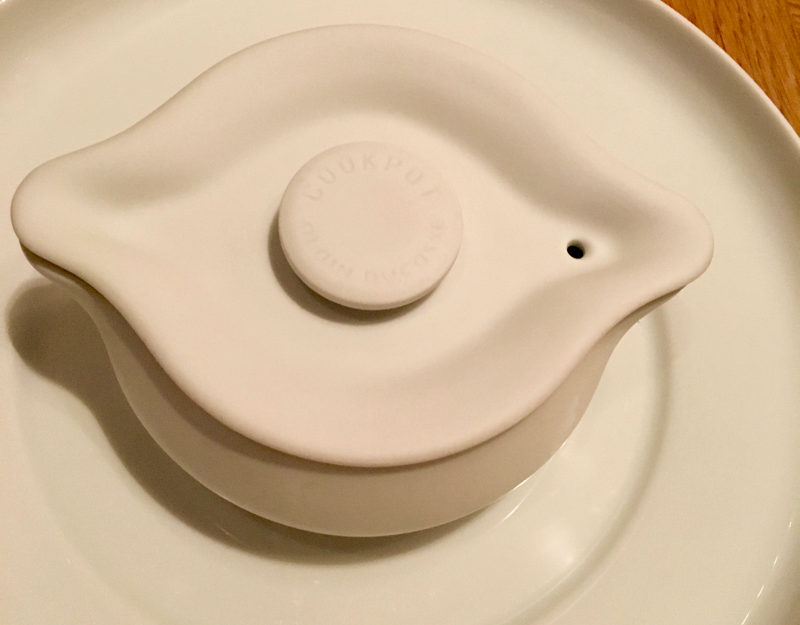 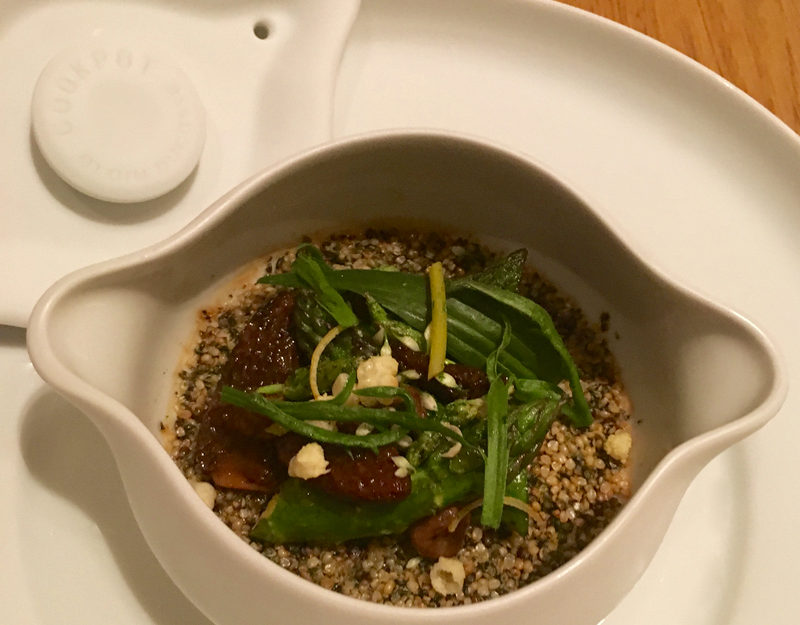 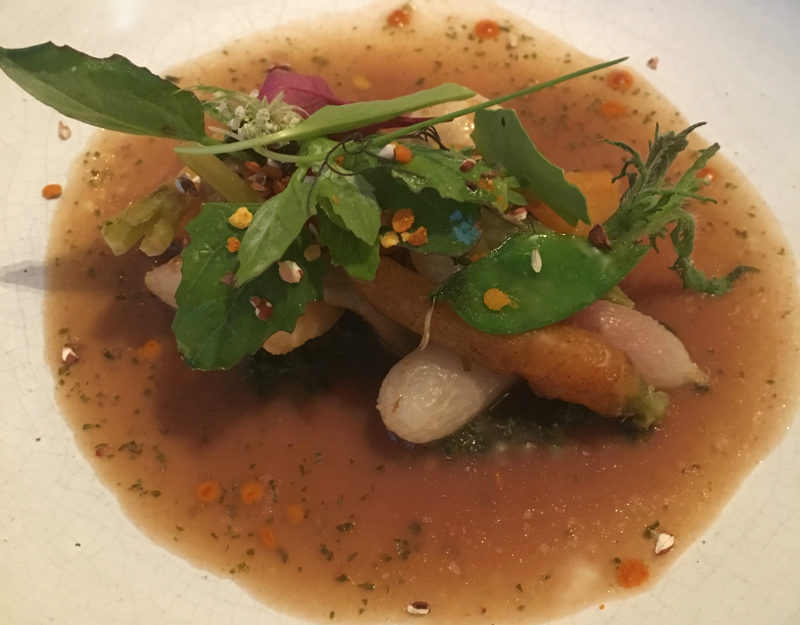 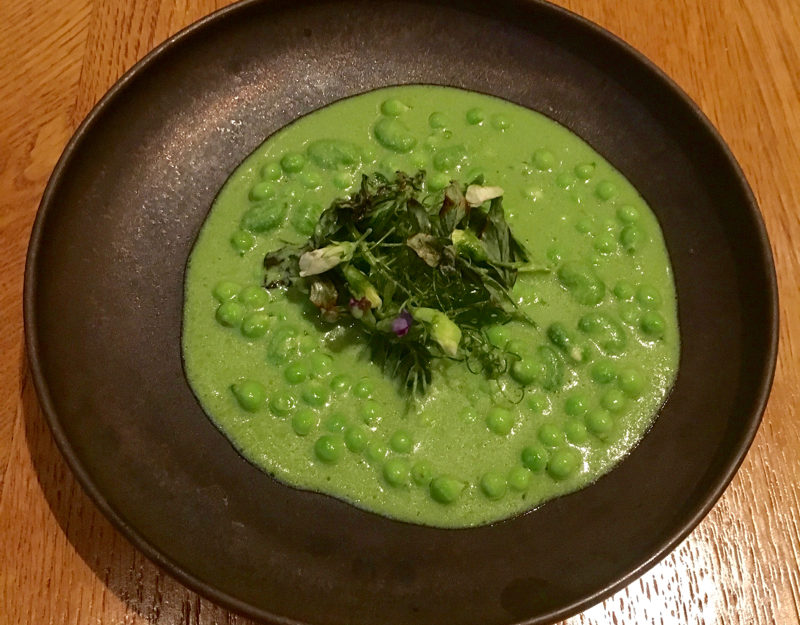 The head chef Romain Meder brings Ducasse’s naturalness philosophy to life at the Plaza Athénée with his creative but respectful zeal. Like in the healthful Mediterranean diet he is encouraged to use France washing wild fish and organic ancient grains like the red corn from the Basque region, Khorasan wheat, buckwheat, and other nutrient-dense plants grown by small scale farmers. A fibre rich Psyllium husk is also used either as flour or additionally to some naturally gluten free flours. The seeded rice and psyllium bread served as the centrepiece in the bread service alerts deliciously that a naturally gluten-free loaf can be perfectly moist and crunchy as we like it. 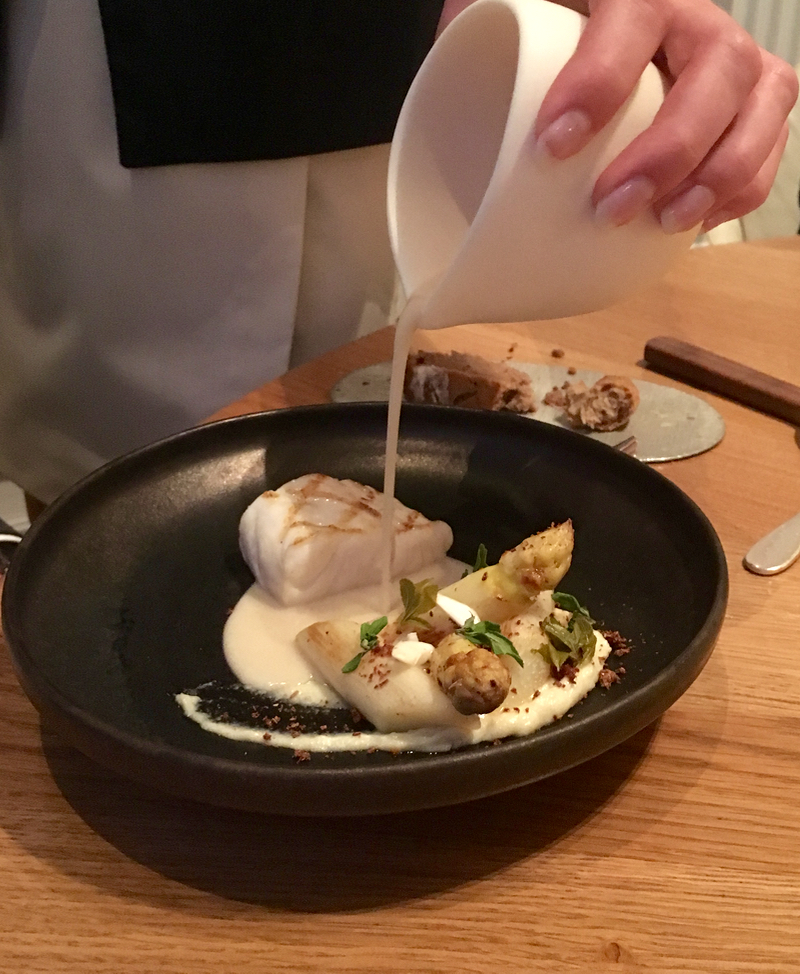 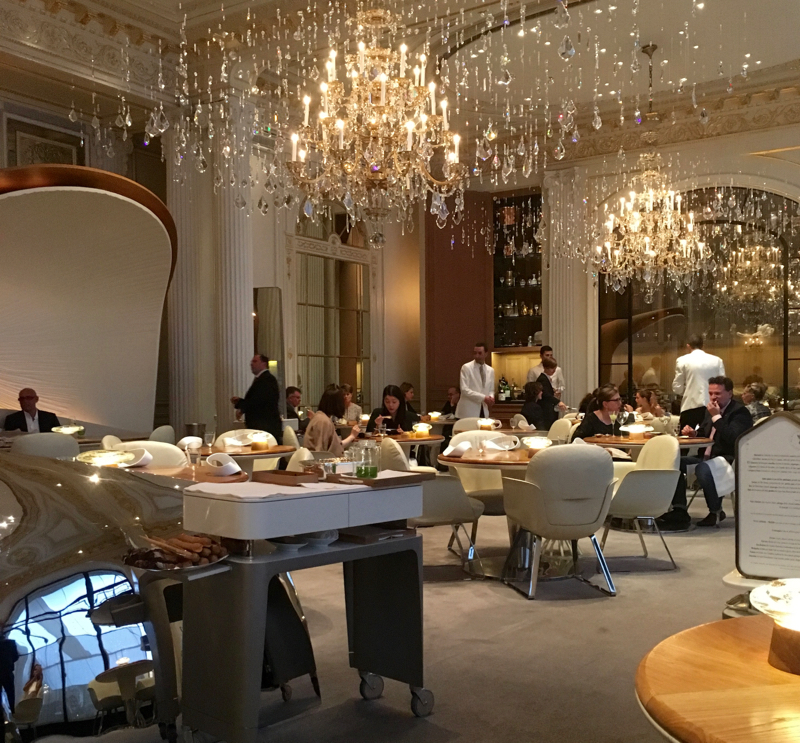 The Atlantic sea bass, white asparagus and almond milk of my friends was the most disappointing plate for the stellar price tag (€140), yet despite of it being slightly boring, the fish was good enough to enjoy. The nut milk did not pay the best service to the sustainably caught bass. A fishmonger Gilles Jégo supplies seasonally the diverse line-caught species that are every morning freshly delivered from the small boats cruising on the Atlantic and the Mediterranean. The Cotentin blue lobster, shellfish eggs emulsion and turnips was another game. Succulent, tender and light while generous, contrasts worked here.

For some tradition nostalgia, U stocafi à la monégasque brought Ducasse’s early success in Monaco to the menu’s consciousness. Any seafood can be also prepared in its simplest naturality, and meats upon request sate the wild spirited.

A bit of naughtiness to finish…

The cheese is served in two platings. A duo of by the chef picked cheeses at first, and later if you wish a carefully selected French cheese trolley rolls in for you to indulge your passion for artisan dairy. I requested a slightly oxidised Vin Jaune from the Jura region to be served with my cheese plate, and the sommelier happily poured some of the well aged Vin d’Arbois into my glass.
To a sweet finish, the desserts are in a contemporary fashion light except for the extra off-the menu treat of the classic Baba au Rhum, the traditional French sponge cake soaking in a prime quality rum. My Lemon picked in Nice area, kombu seaweeds with tarragon was refreshingly citrusy but the lemon sorbet was a bit too sweet, but he Burlat cherries from Lizac, pesto and watercress of my husband were exquisite. Simple while being originally flavoured with the savoury green pesto, a hit! Now chocoholics beware since the Alain Ducasse chocolate Manufacture creates extraordinary luxuriant cocoa delicacies specifically for the Plaza Athénée restaurant. After some quite good morsels of dark chocolate covered rice crisps, the gold of the Maya pops on the dessert menu as Chocolate from our Factory, toasted barley, cocoa and single malt sherbet. The whisky addition attracted our Chinese friend, yet she was disappointed not to trace much of the flavour of her favourite spirit (whisky) in it. Still, the best was the most natural plate of the night – the giant Versailles grown raspberries served in a bowl with their stems by the finale of our grand dinner. I just should not have to be paying the triple digit meal for all of it, well the atmosphere counts. 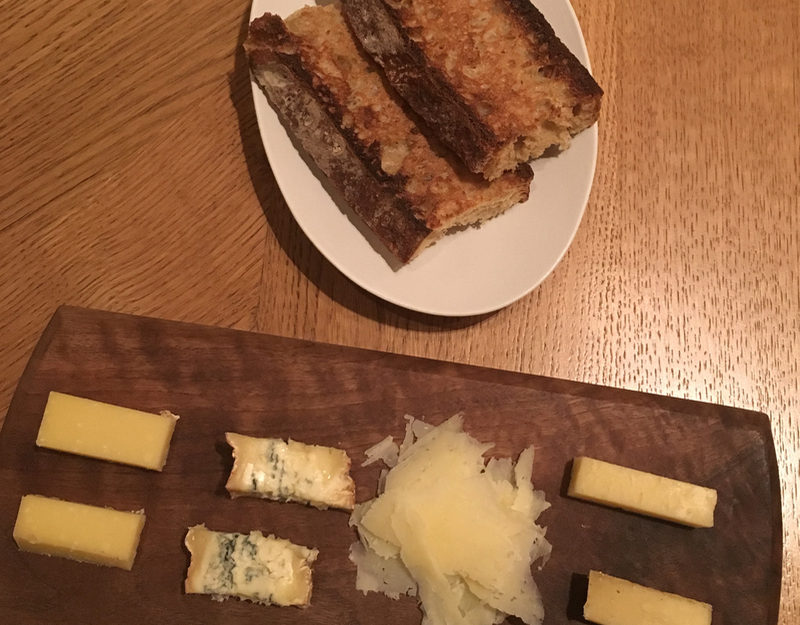 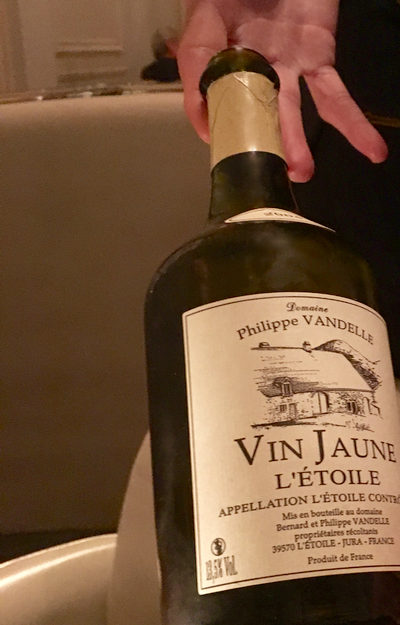 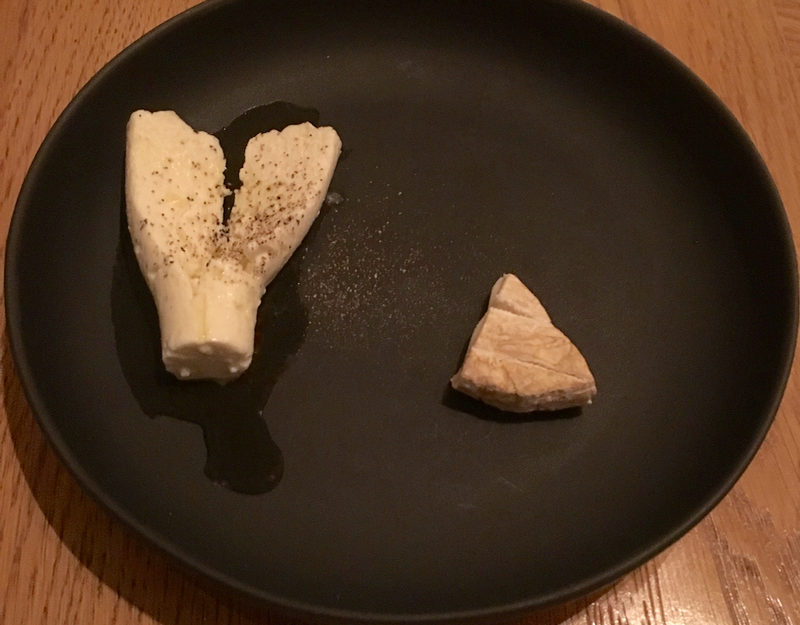 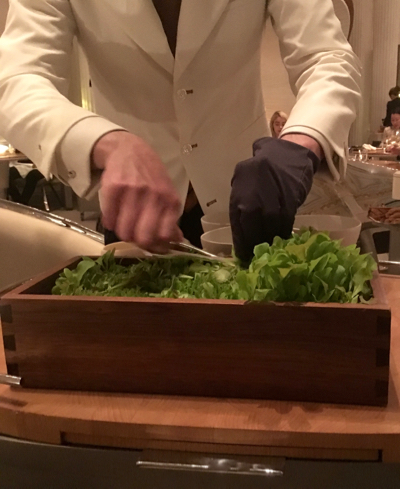 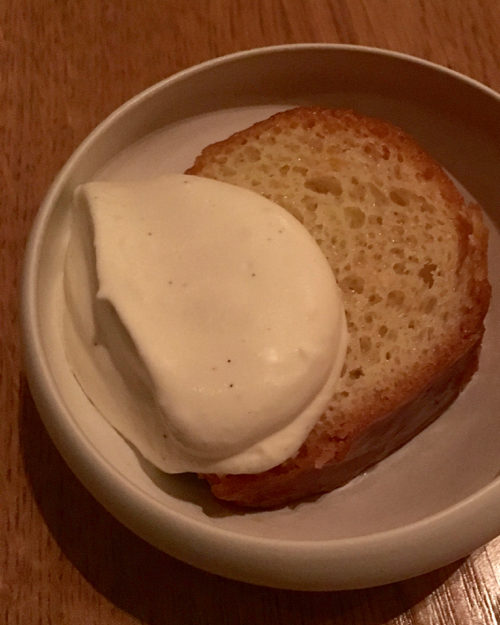 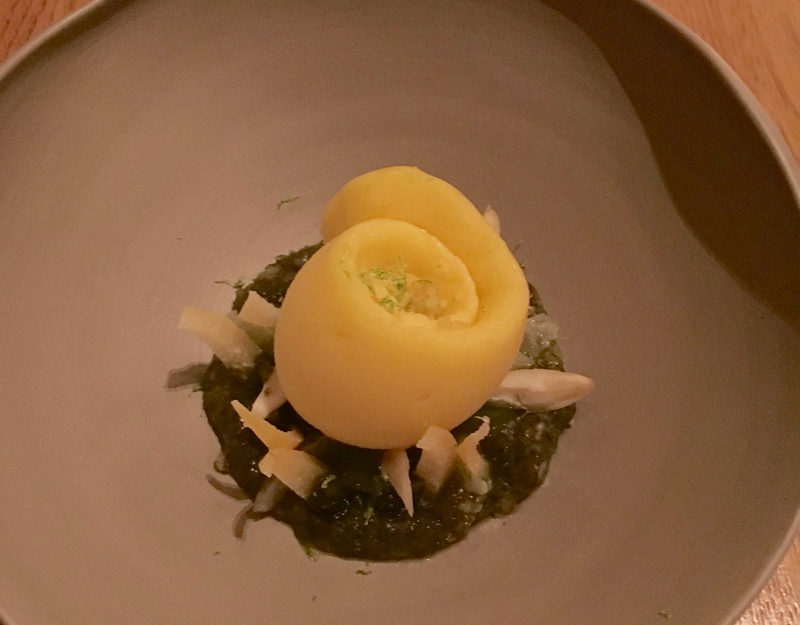 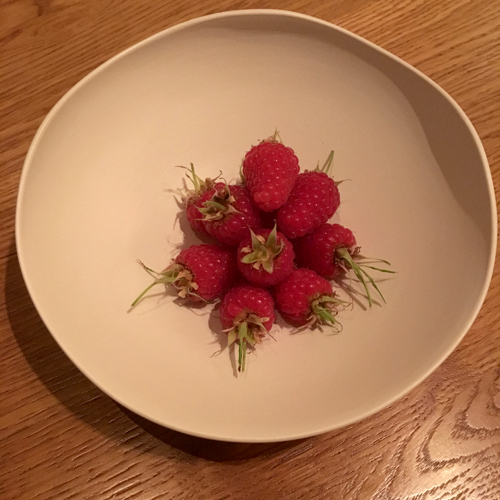 The wine list at Alain Ducasse au Plaza Athénée Paris is not as extensive as at the most established three Michelin stared restaurants across France, yet many treasures take the stage like our favourite Châteauneuf du Pape, the rare Château Rayas. Not everything from the cellar is available. Mostly the wines that are ready to drink, while the rest is being cellared until the sommelier decides to price them. These have “e.v” instead of the price on the list. The wines are classified by their generation in the “Celebration” picks – 10, 15 to 55 years age according to the harvest vintage while À l’apogée (at the peak) is a selection of wines at full maturity. The sommelier will exclusively attend to the hull shaped Table Cabane table, where the Bordeaux know-how is the focus of the vinous indulgence. Jacket is required for gentlemen, so ladies pull your best robe out!
Plaza Athénée Hotel, 25 Avenue Montaigne, 75008 Paris
+ 33 1 53 67 65 00
Lunch: Thursday & Friday: 12:30 pm – 2:15 pm
Dinner: Monday – Friday: 7:30 pm – 10:15 pm
ANNUAL CLOSURE Friday 21st July after lunch to Monday 28th August included. Friday 22nd December after lunch to Saturday 30th December inclusive.