Locally-seasoned chef Kin Lui took the evolution of sustainable sushi from his tenure at Tataki seriously. Tomatoes, eggplant, tofu et al. are treated as if they were prime filets of tuna, minus the high carbon footprint and animal suffering.

Shizen is a plant-based sushi and izakaya eatery in San Francisco catering to eco-conscious diners with great taste, patience and penchant for Japanese cuisine. Priding itself to be “fully vegan sushi bar and izakaya” sets Shizen apart from most of the highly competitive sushiyas in the Bay area. An increased environmental awareness next to the health benefits of plant-based cuisine lure teenagers, millennials, straight, bi-, trans-, gay, together with the 1960s hippies. 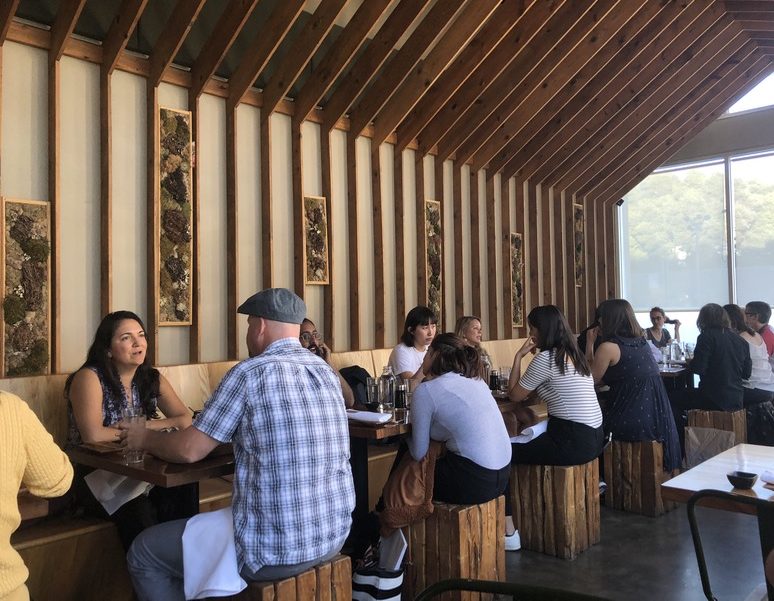 Hawaii-raised chef Kin Lui took the evolution of sustainable sushi from his tenure at San Francisco’s Tataki seriously. Tomatoes, eggplant, tofu et al. are treated as if they were prime filets of tuna, minus the high carbon footprint and animal suffering.
The nightly lines forming in front of the restaurant affirm the popularity of plant-based cuisine in San Francisco. Limited reservations policy open to walk-ins, plus opening only for dinner can cause headaches to scheduled diners used to planning everything though. I had to be savvy about how to get into the narrow dining room, lest the sushi counter at Shizen. I went on Monday. Flying in with an ease of a fruit fly at half past five, the two of us were seated at a spacious foursome table. Ha, I thought, I would be silly to battle for seating here on a weekend! 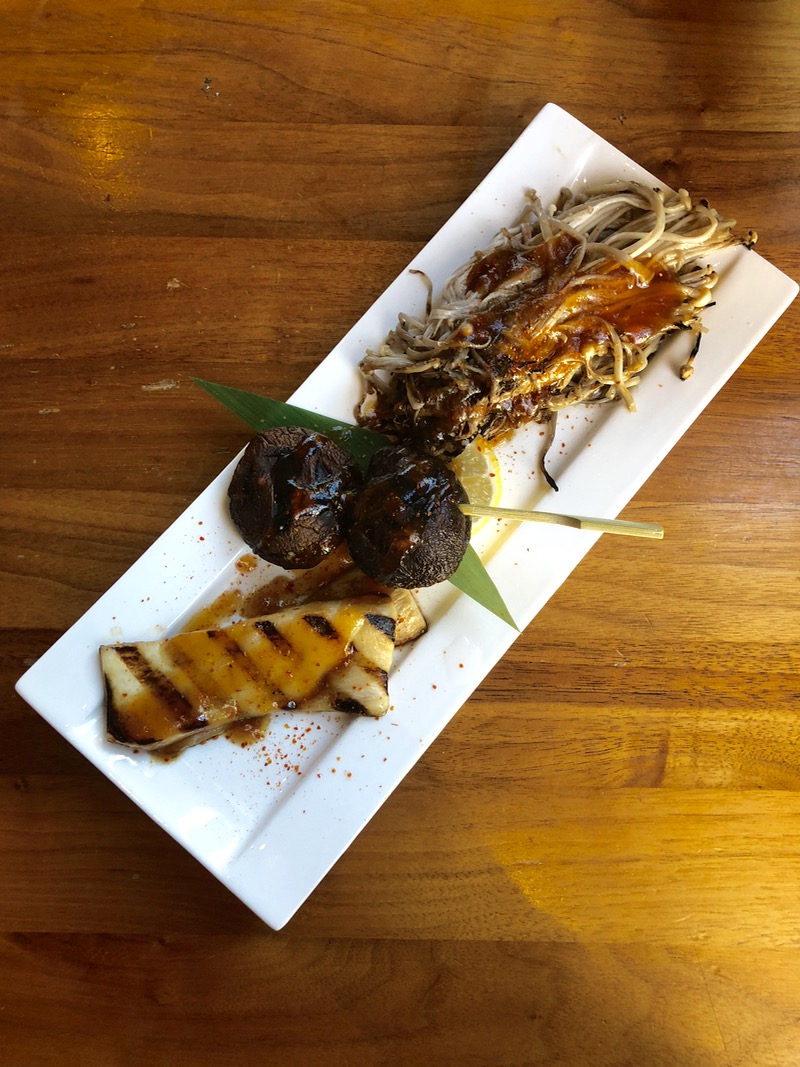 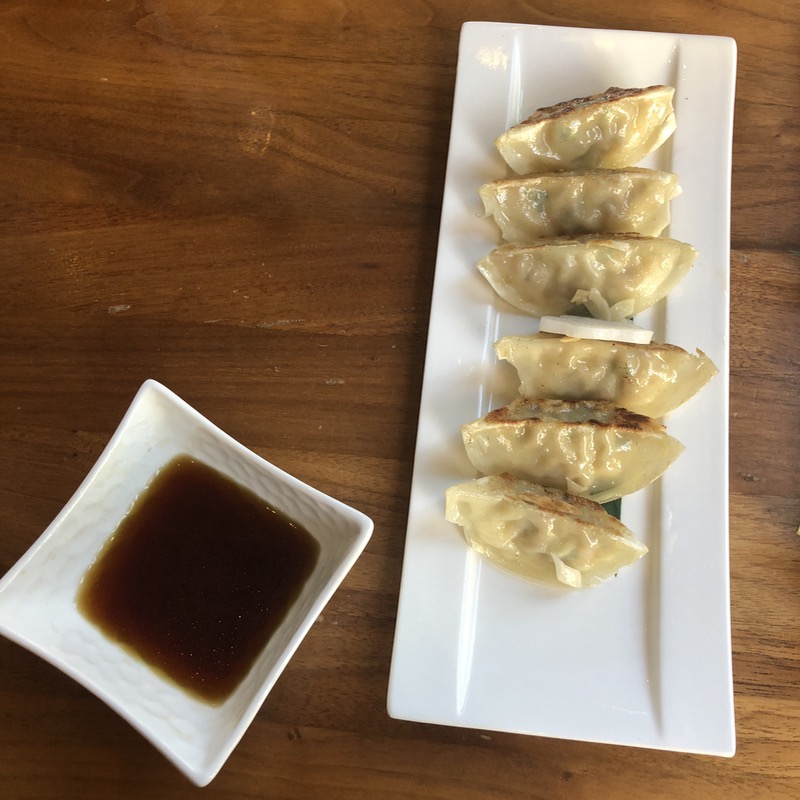 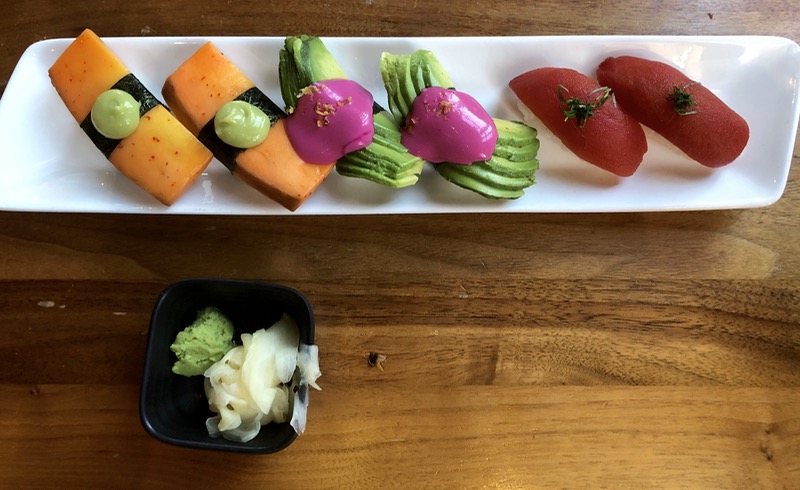 At Shizen Japan meets California in a sustainable coat

The striped-shirt clad service was well-informed and attentive. And the food – order most of the nigiri (two per order) and a roll (a log cut into eight pieces) or two, but skip most of the izakaya plates. We tried much of the menu justifying our verdict. Yakimono grilled skewers, a spicy trio of eryngii, shiitake and enoki mushrooms were quite boring. Toban-hot pan searing brussels sprouts too salty. Yet, the tofu and vegetable gyoza killed the undercooked, bland dumplings we returned twice just a week later at Matthew Kenney‘s Arata in New York. Slightly pan-fried, the cloud-shaped perfect dumplings were stuffed with a mince of tofu that had all the textural characteristics of pork, tasting succulent. Vegan cooking got so good that one does not have to call things “mock meat”. Tasting as good if not better than the animal recipe met the challenge of comfort food. 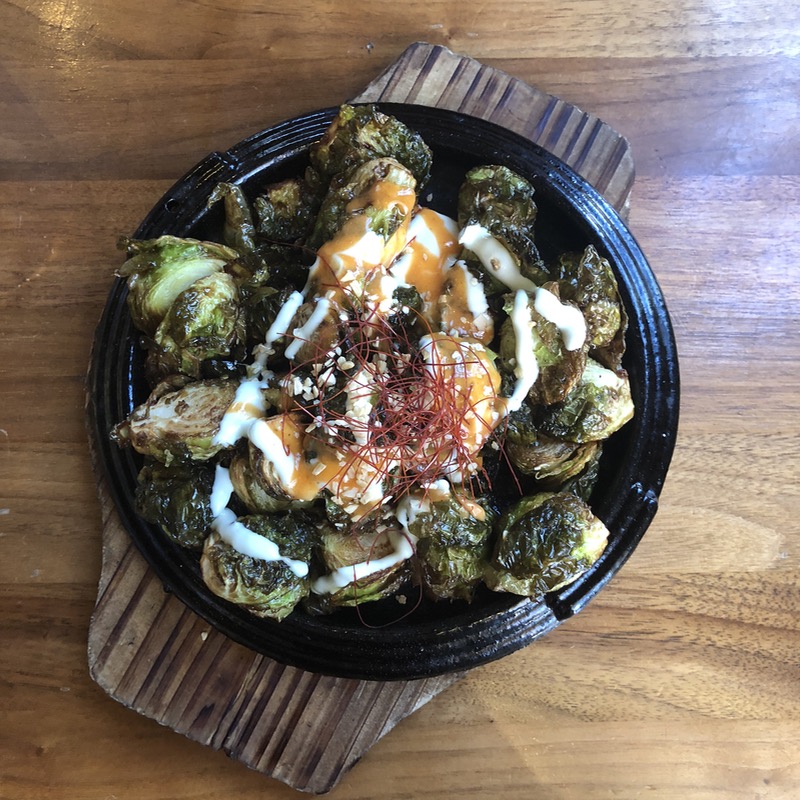 A bowl of nameko mushrooms miso soup was a solidly wholesome bowl with tofu and seaweed umami. Gluten-sensitive eaters will rejoice since many dishes are naturally free of this allergen or can be adjusted. Eater praised the vegan ramen. Broths without pork – instead flavouring it wholesomely with shio, shoyu, or spicy garlic miso – proved the skills and yummy-grasp of deliciousness by the chef. Egg-free handmade noodles, soy milk replaces the egg, and no pork belly chashu tops the bowl. Since I do not like anything pork in Asian cuisine, this ramen at Shizen is an easy winner. 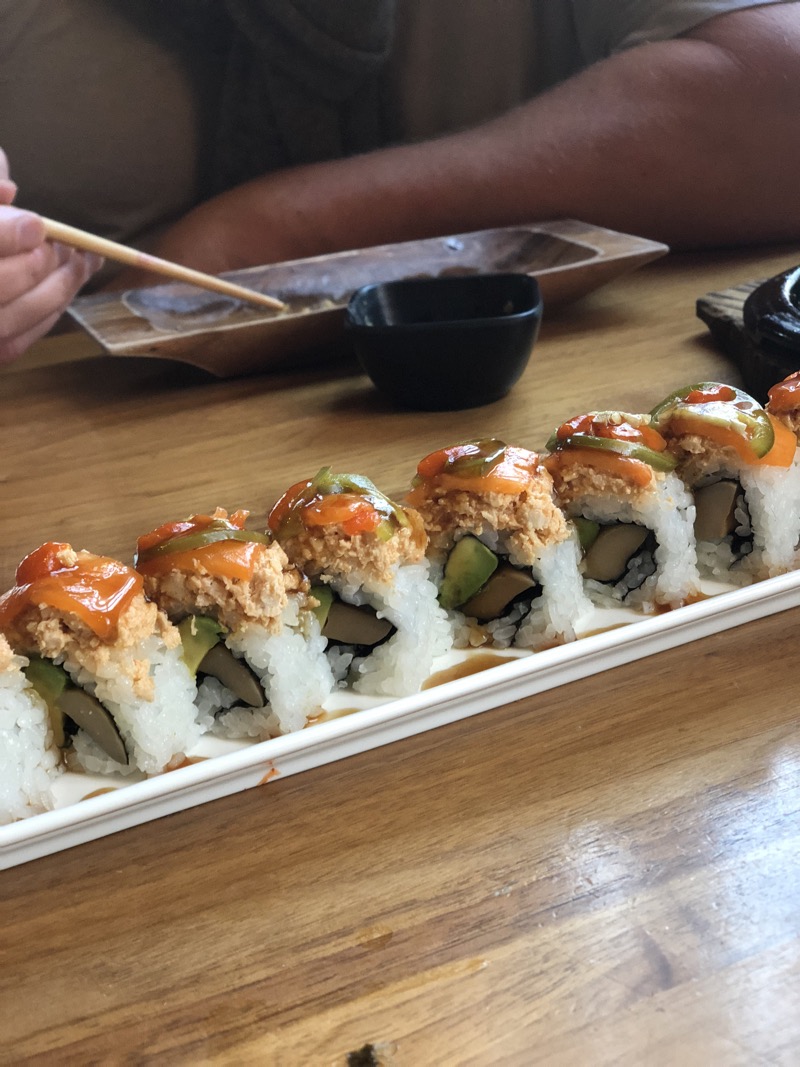 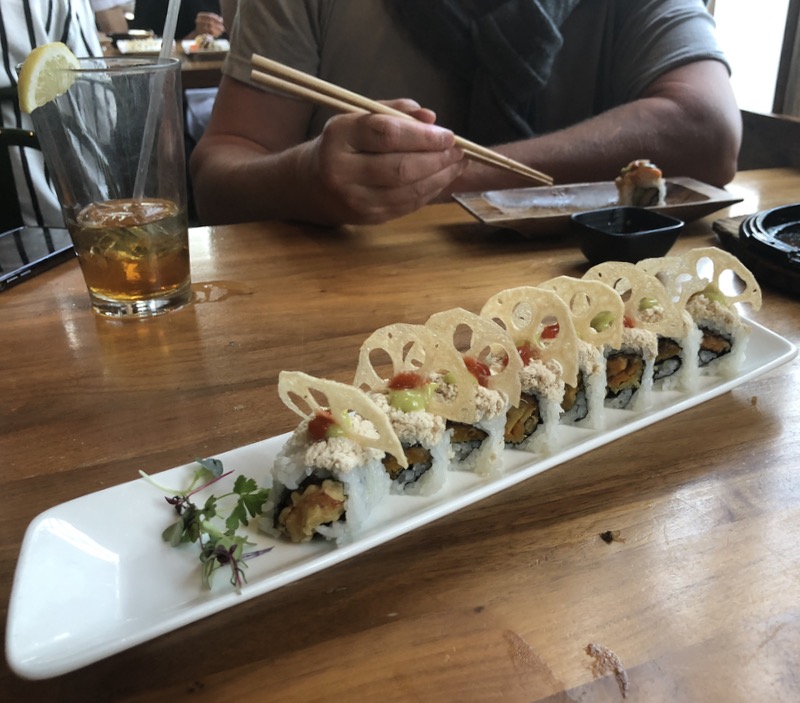 The seafood-free nigiris are the best thing since sushi was invented in Japan. Unless, you dine at the best sushyias, Shizen makes the neta topping on the bun of sticky rice tasting better than most fish and seafood at restaurants. Marinated tomato with shiso brought to my mind the flavour of superb maguro tuna, the luscious avocado topped with a smoked beetroot “aioli” and lemon zest nods to Sushi of Gari opulence, while the eggplant with vegan miso mayonnaise and scallions could match an eel or wagyu beef neta. The pickled green mango with citrus-avocado mousse was too far off any seafood I recon, perhaps an egg omelette, but uni, the luscious and creamy sea urchin, would be a hard call to abstraction.
The rolls are served by eight pieces so you need at least one partner to share them. We were not impressed by the crispy lotus roosters, but the spicy “tofuna” roll with cucumber as well as the speciality “open invitation” roll with pumpkin were exquisite. The best rolls at NYC-based Beyond Sushi would challenge them. The “candlestick” roll is served on a fire, beware!

The bar feel that opens to anyone

Although izakaya bars in Japan are boozing with alcohol, you can stay “clean” at Shizen. Tea, a peppermint tisane, sugar-free iced tea, Ginger and shiso lemonade, Matcha and yuzu soda or Spicy pineapple and lime for the adventurous teetotallers all sound decadent. Cocktails, and Japanese or local beers on tap, in can or bottle, including ciders, cheer up the rest. 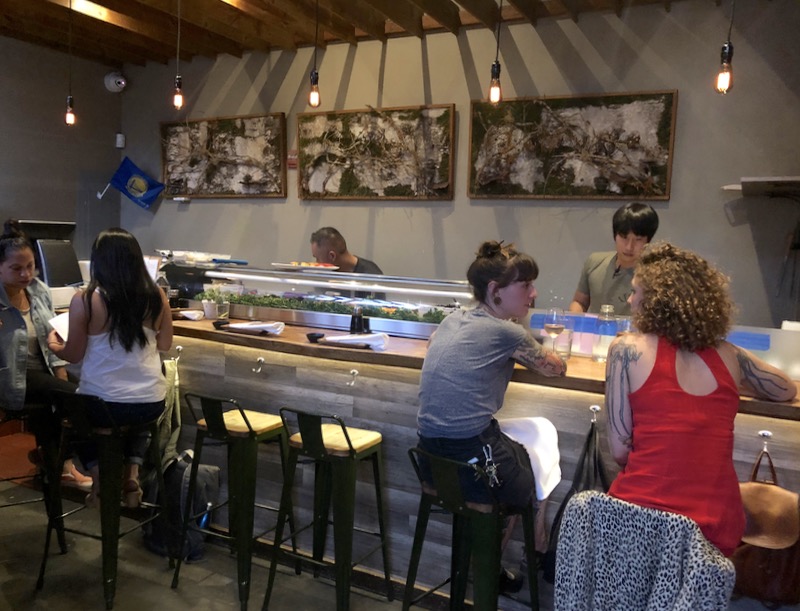 Shojin ryori, the Buddhist plant-based cuisine, gives some base, yet Shizen is not formal. The line-forming, first come, first serve, long bar and bare, tightly spaced-out seating is very common in Japan. Shizen brings the dense, disciplined feel of Tokyo to San Francisco, and it is worth the wait. I will be back – on a Sunday or Monday for an early supper – but I am too time-sensitive to stand in a line for hours just to eat. In the city of Uber’s headquarters, I rather turn to what the app offers, even though Shizen is not the order in option, yet.
370 14th St, San Francisco, CA 94103
Daily 5-10pm; Closed on most holidays.