The food at Pierre Gagniarre is an art, a painting on the plate and a great spectacle at the table. It is a culinary experience every serious foodie with enough money to spend for his hobby should indulge in. One feels like on a medieval banquet of royalty with a millennial design.

Pierre Gagniare is one of these global chefs whose culinary star twinkles from Asia to America. Many restaurants resonate his name having the menus created by this multi Michelin stared French chef. I have tried his restaurant in London (Sketch) and the fine dining establishment in the French Alps (at Les Airelles hotel in Courchevel). Therefore, I was genuinely excited to secure a table at his flagship three Michelin starred crib in Paris. 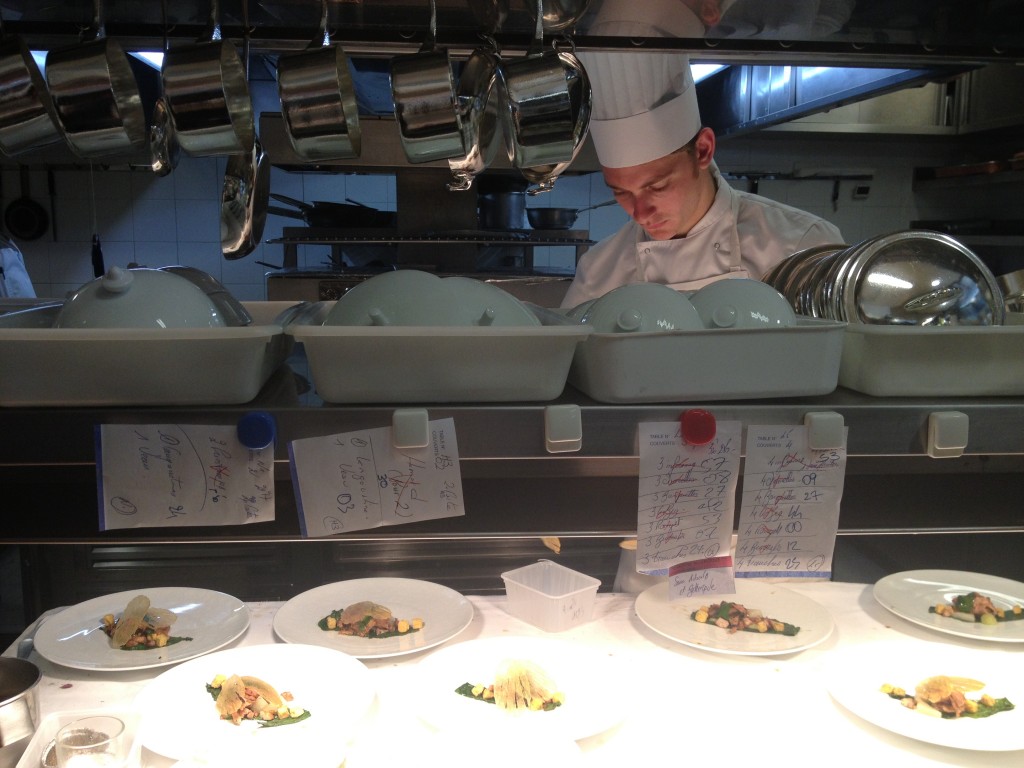 Not every dream has a happy ending though and we rarely foresee what will happen. The food at Pierre Gagniarre is an art, a painting on the plate and a great spectacle at the table. It is a culinary experience every serious foodie with enough money to spend for his hobby should indulge in. On the other hand the gustatory pleasure from Gagniarre’s complex modern French cuisine might differ strongly from a person to person. I have listened to flattering odes about this restaurant from many fine dining fans, but I have also heart unpersuaded voices. I am somewhere in between. 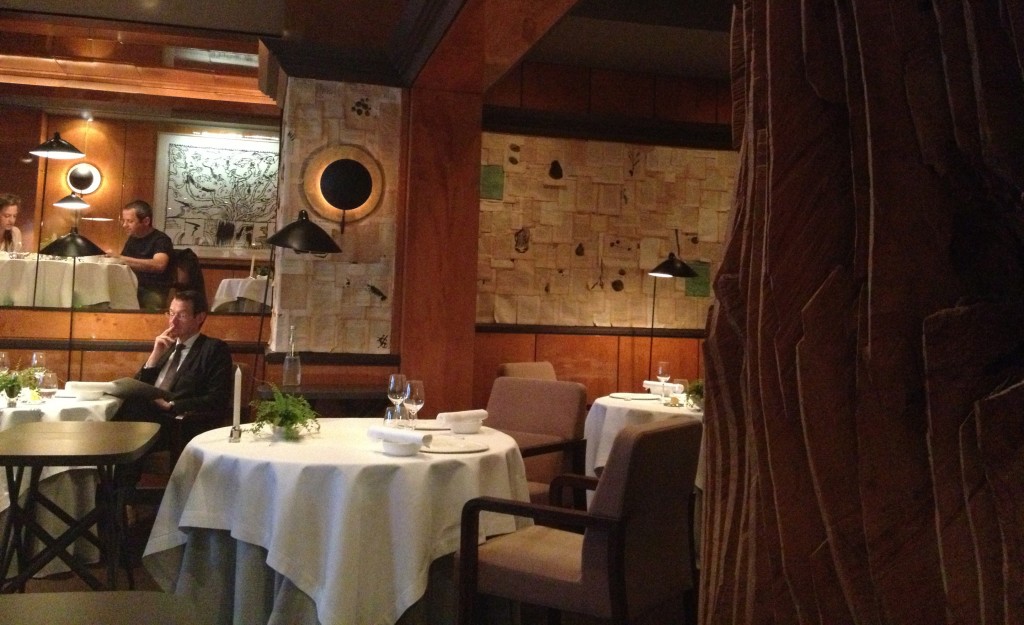 The food is unique, crossing boundaries of imagination and mostly tastes very rich. All strengths, but also like sword wounding the sensitive stomachs of some diners. The mixture of multiple dishes, often in a striking contrast, can be too much. One feels like at a medieval banquet of royalty with a millennial design. The portions are much smaller than they would probably had been on such occasion, yet the opulence and desire to satisfy every palate correspond to a royal feast. 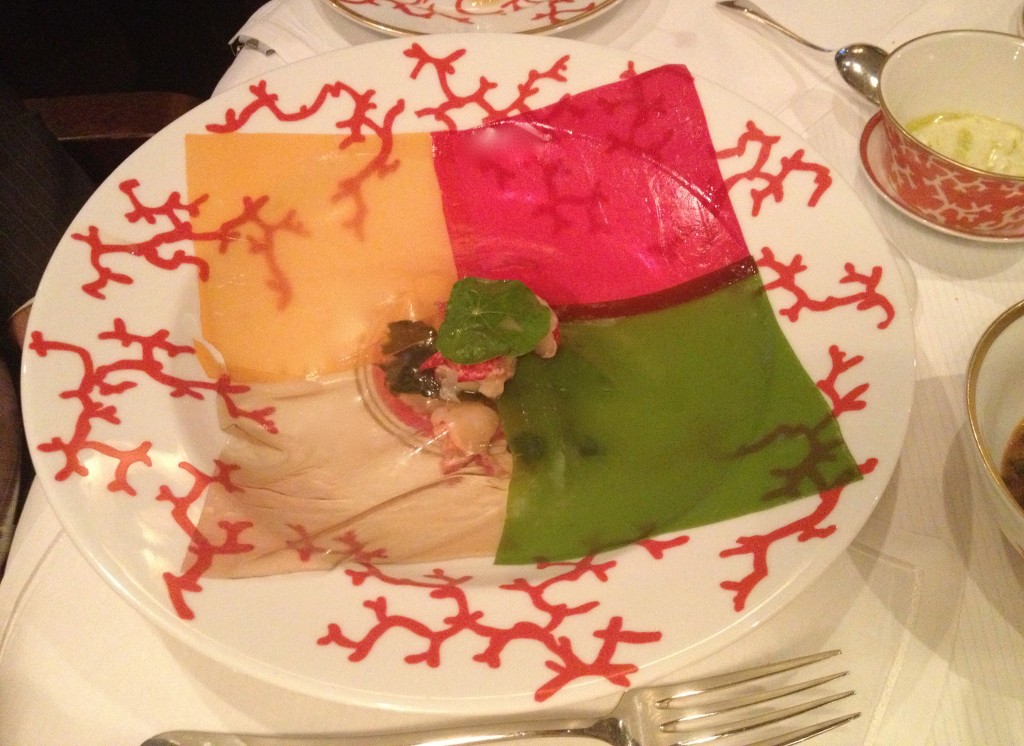 Since the menu changes daily, it does not make much sense to describe each dish. The impression can be different from a day-to-day. Perhaps my quite disappointing dinner might have been just an unlucky coincidence. For the extremely high price tag I am not motivated though to come back any time soon.
Each course, including the amouse-bouche, consists of a number of plates created around one main theme, that you select from the menu. Overall, dining at Pierre Gagniare in Paris is an enormous tasting of some 20 to 40 dishes with the in between palate cleansers and desserts (plus the bread). The advantage of this concept is that you will probably find one or two dishes in each serving that you will like. It almost should be shared. I found my favourites, while my tie and suited partner enjoyed either the same or some others that were more in tune with his personal taste preferences.
The ingredients come from France, but also from other countries as the chef blends their flavours into his own original creations. Spanish, Middle-Eastern and Japanese nuances prevailed on the plates when I dined there. The Spanish ham, spices and seaweed were quite unusual together. I could not appreciate them all at once in this combination. 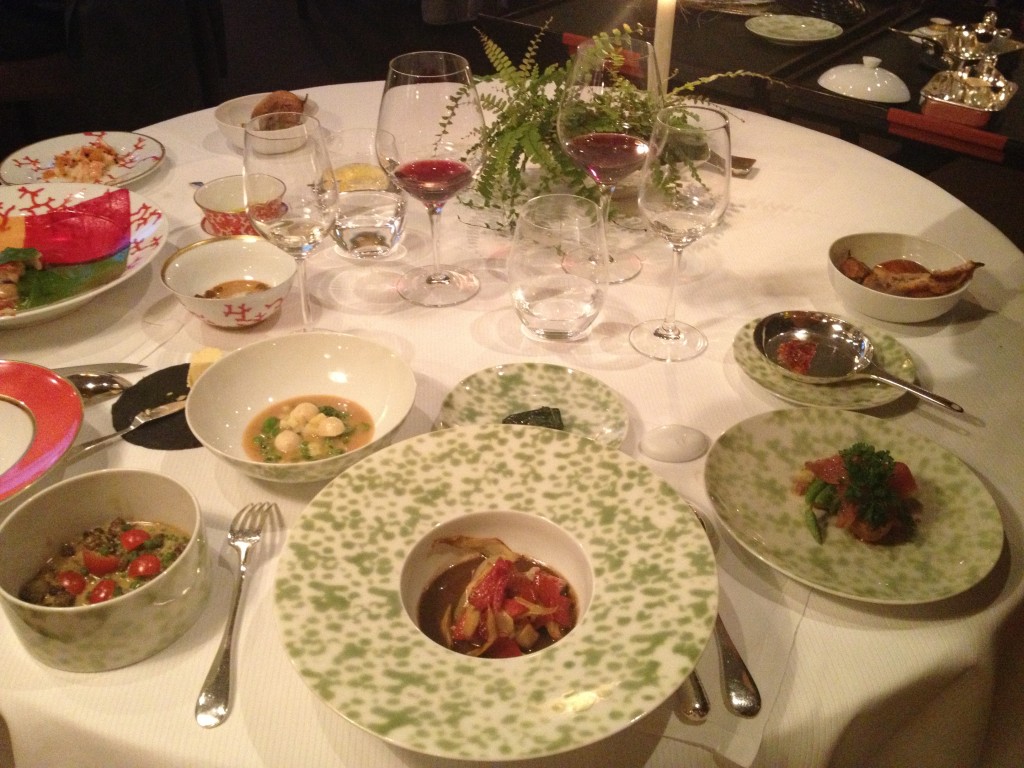 The comfortable and smart setting in a room filled with art calls for dressing up. Wooden walls and design features add a natural twist into an otherwise “heavy” atmosphere. It is a Parisian old school fine dining restaurant, therefore a jacket for men and smart attire for women are required. There are so many waiters serving you so it might feel that there are more of them than the diners. At a three Michelin star restaurant it is common though. After our meal I was ushered to the kitchen. Observing all the chefs working so hard I appreciated their dedication to the grand cuisine of Pierre Gagniare.
The wine list is good, but not of a calibre I would expect at such a high-end restaurant. The choice of French wines displays mostly newer vintages. The sommelier did not advise us to our expectations, when we were asking for an elegant, soft Burgundy. He persuaded us to a very expensive Grand Cru Musigny Domaine Jacques Prieur 2008 vintage, which was quite austere on the palate, too young at that time, and we did not enjoy it with our food at all. It i almost impossible to pair any wine with Gagniare’s concept though since the dishes are so diverse that there will always be some plate that just does not go well with the wine one is drinking.
The selection by the glass is also not wide enough. I had a glass of white Chassagne-Montrachet from 2009 vintage to start and liked it much more than the bottle of Pinot Noir we were recommended. 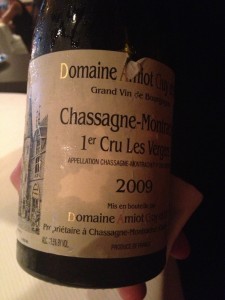 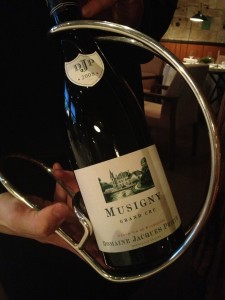 Although his gastronomic fusion French cuisine has been replicated elsewhere, Pierre Gagniare, a global chef whose culinary star twinkles across continents, guards his three Michelin stared Paris femme fatale above all his mistresses. Next time, I will try not to eat all day so hunger will drive me without craving balance, and perhaps I will enjoy his food more. Meanwhile, I will head to Ducasse, Nomicos, at al., the great Michelin restaurants that have never disappointed in Paris.
Visit: July 2013
Price: Very expensive (This is one of the most expensive restaurants in the already pricy Paris).
Mon-Fri: Lunch: 12:00–1:30 pm, Dinner: 7:30–9:30 pm; Weekends closed.
Hotel Balzac, 6 Rue Balzac, Paris.
+33 1 58 36 12 50