Atala is not just bringing the local produce back to the plates, but he resuscitates Brazilian cookery in its most exotic form. While serving deep frozen and then defrosted ants in order to preserve the most of their lemongrass-like natural flavour rises the eyebrows of some, the world's food critiques and chefs bow down to his daring attitude.

The tattooed Brazilian chef Alex Atala is a former punk and DJ, but currently also one of the most watched talents in the globe of contemporary gastronomy. His restaurant DOM in São Paulo brought gastronomic Brazilian cuisine into the new highs of respect.
His moto: “Brazilian gastronomy is a feasible dream” is brought to reality at DOM and bestowed his culinary art with laurels from the ‘World´s 50 Best Restaurants’ awarded by the British Restaurant magazine’s jury. His coveted baby – DOM has scored high in the rankings for years. A remarkable achievement for a chef in a country known more for its carnivals and long sandy beaches, but a novice in the high gastronomic society. What Roberta Sudbrack, also a successful Brazilian chef had started, Atala stretched into extreme. 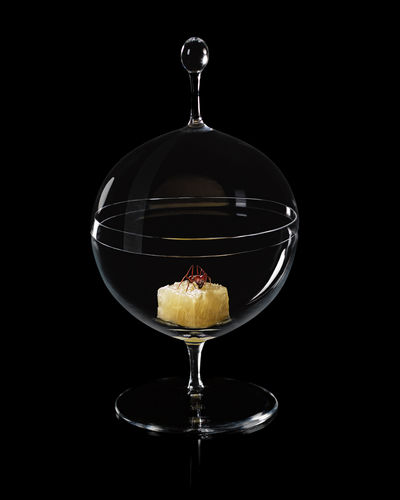 DOM intends to wow, and it does

It is ironic that in today’s culinary marathon of innovators, using domestic ingredients is glorified and considered groundbreaking. After all, aren’t all these chefs just using the same material as our grandmothers once did?
Well, chef Atala is not just bringing the local produce back to the plates at DOM, but he resuscitates the Brazilian cookery in its most exotic form. While serving deep frozen and then defrosted ants in order to preserve the most of their lemongrass-like natural flavour rises the eyebrows of some diners, the food critiques and chefs bow down to his daring attitude. His Amazonian ants sat on a cushion of pineapple cube when I dined there. Their skeletons crunch hardly between the teeth, and then release their herbal lemony taste in your mouth, leaving you either bemused or shocked. They are worth trying and a sustainable act, since there are zillions of ants in the Amazon. Atala’s efforts through his charity aim to resuscitate the food chain and the healthy lifestyles of the Amazonian native tribesmen. He is the herald of the Amazon’s biodiversity deserving our support.

Leave stereotypes aside, accept the challenge, pay for the ants, and enjoy the adventurous feast! The exotic, tribal indulgence can be discreet. In a private room available for hiring, the diners can be shaded from all potentially uncomfortable or curious looks.
The classy cum modern ambiance all made in Brazil of the dimly lit main dining room attracts the business elite of São Paulo. Adventurous foodies flood in and their hungry eyes admire the wild artefacts adorning the restaurant’s interior. The life-size old wooden kayak and quirky sculptures, convey the message that Alex Atala brought the wild Brazil inside the DOM restaurant. 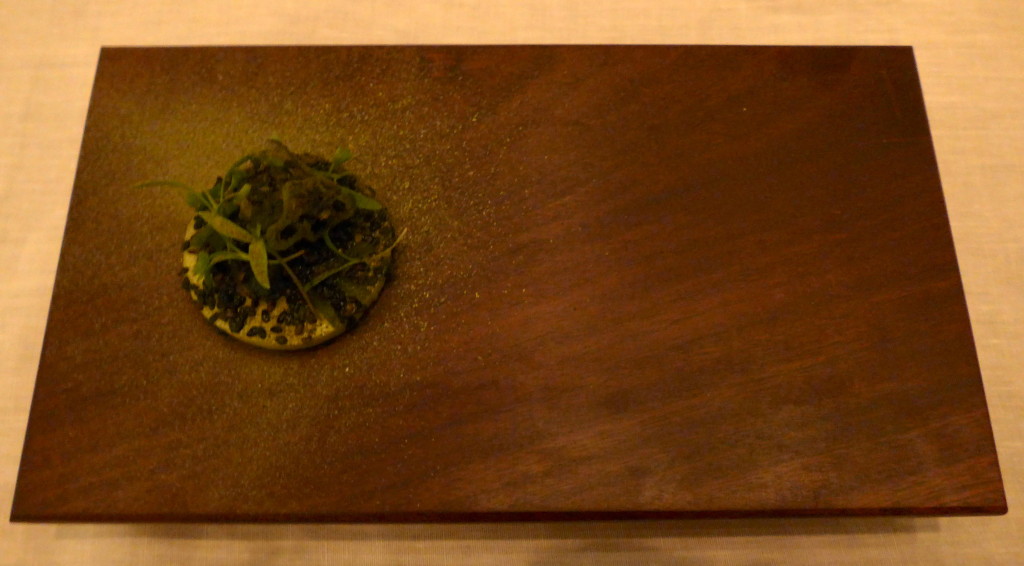 Watching the flickering hands of the cooks, and the focused gaze of the executive chef arranging each edible fragment into an artful marvel on the plate is entertaining in itself at DOM. The show involves both the actors and the spectators, as the kitchen’s openness allows the staff to connect with the restaurant’s customers. Creating a communal sense and an exchange of creative ideas from their birth to their interpretation by the consumers themselves is what DOM wants to do. 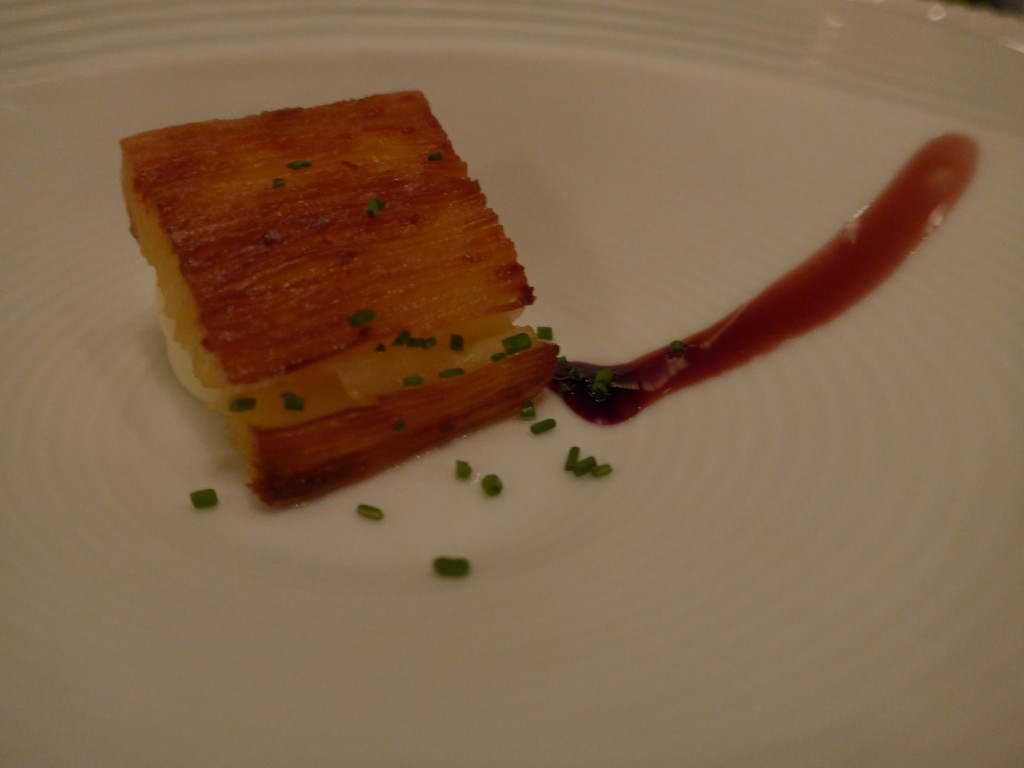 Alex Atala is not a novice, but a well-travelled professional chef with open eyes and a fearless attitude. After a couple of culinary stints in Europe, he returned to São Paulo in 1994, where he was in charge of the restaurants Filomena and 72. In 1999, he gained even more creative freedom as a chef-owner in the acclaimed Namesa, and a couple of months later he also opened DOM, that was to become the ‘Best Restaurant in South America‘ within the coming decade.
His food is mostly about stepping out the developed world’s comfort zone and creating a unique experience with the authentic Brazilian ingredients. The chef’s creativity steps in adding a modern twist on traditional tribal recipes and use of the raw foods. 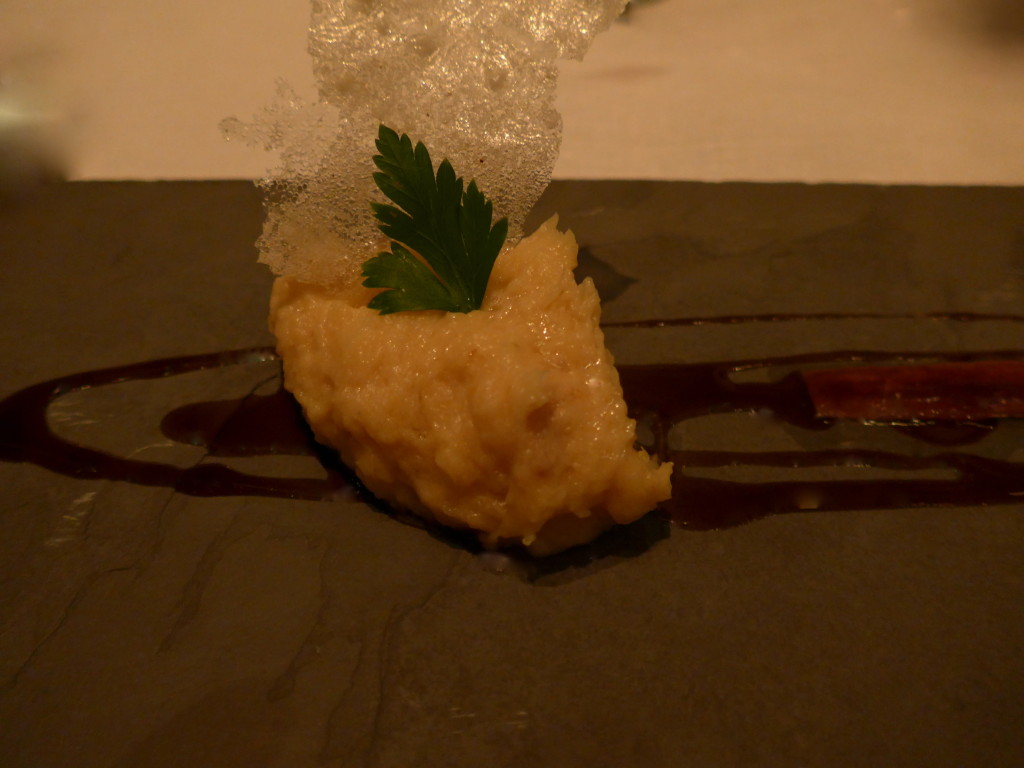 The chef’s quest to find or rediscover the gems of the Brazilian forests, rivers and land reflects itself in his four or eight-course tasting menus and the vegetarian friendly Vegetable Kingdom menu.
Some of the ingredients featured were: tapioca, acai, canjiqinha (white local corn), baru nuts, beldroega, pupunha (a type of cultivated heart of palm), priprioca‘s fragrant root, jambu or Pará Cress (a local herb from the Amazon region), tucupi root, filhote fish, and many others. For natural novelty seekers like myself this is like a dream birthday party on the plates.
Atala also studies the food traditions of the indigenous groups in the Amazon such as the Baniwas, whose use of ants as an ingredient inspired him for his most talked-about dish. 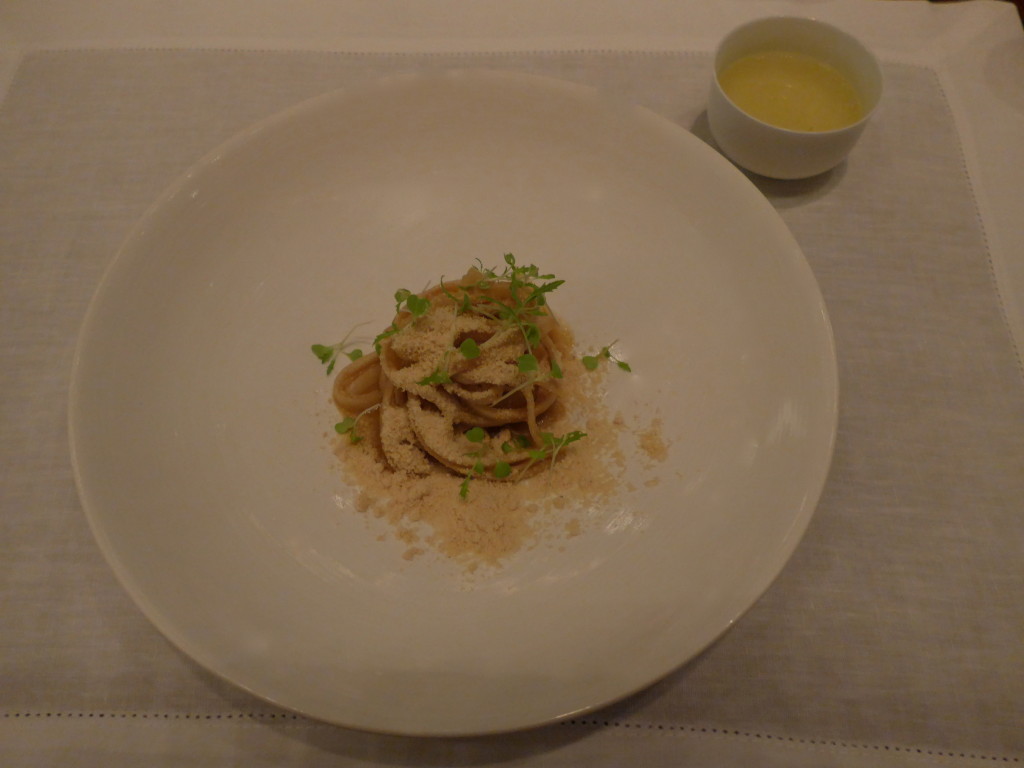 The Vegetable Kingdom menu is very close to the chef’s heart, who claims that he could easily become a vegetarian himself. The menu that I tried started with an Eggplant ceviche and seaweed, that was beautifully presented on a rectangular plate made of wood. It tasted nice, but as with most very modern dishes it lacked the yumminess of a traditionally prepared plate at a classic restaurant (think Italian eggplant Parmigiana, Japanese eggplant tempura or grandmother’s kitchen).
Faijão manteiguinha (a type of bean from the North-east Brazil) with a blob of green kale cream and cornflour was served in a small Frenchie casserole. Again, aside the intriguing ingredients, the taste was good, but not tantalising on my palate.
A quite large portion of Mini rice with artichoke defied its “mini” adjective. For an eight-course menu there was too much of the ‘mini’ rice. Cooked as a risotto, its creamy texture was refreshed with the artichoke, but you would have to be very hungry to eat it all, for it was again not a mind-blowing dish.
The Vegetables with onion jus and sour cream were marvellously presented in a burgundy painted bowl with a black inner tone that visually highlighted its contents. The veggies were juicy, the edible leafs and flowers exotic, but I did not find the sour cream harmonising the dish in any way. Then, a breakthrough happened. 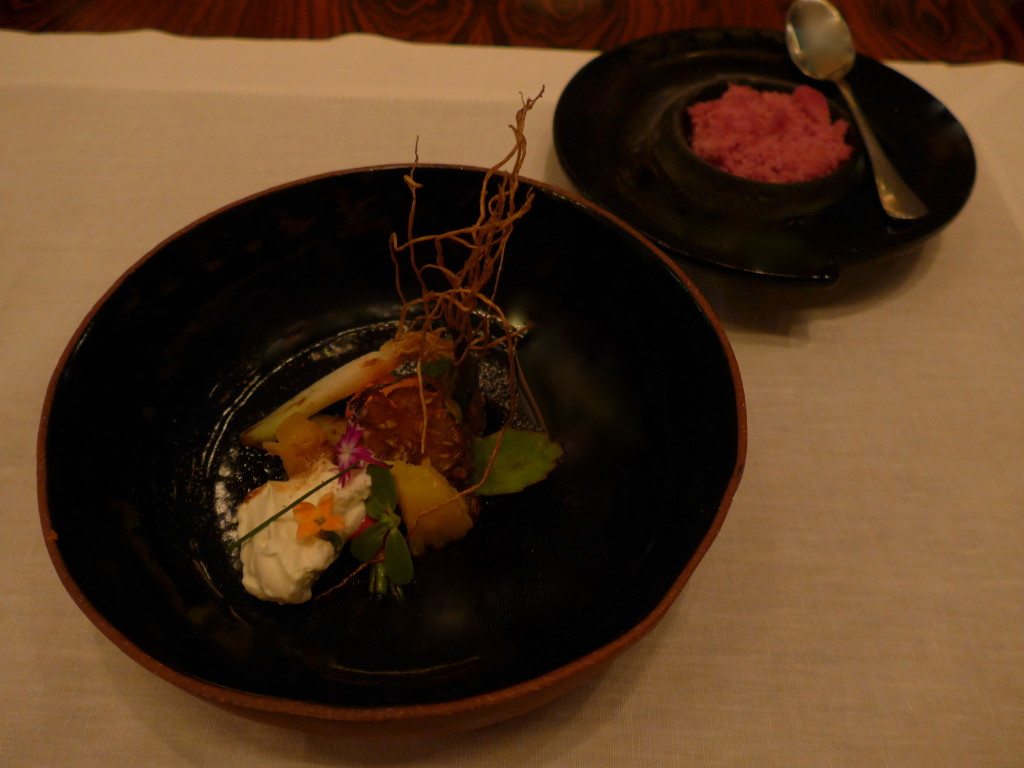 My absolute favourite from the menu were the Heart of Palm Fettuccine with Mushrooms, made from the thinly shaved heart of palm and dusted with nitrogen-icy mushroom powder. One would not guess that there were no pasta in this dish. The soft texture of the heart of palm fettuccine as if these were al-dente cooked pasta deceived my palate and the frozen powder giving off an intense mushroom fragrance was exquisite! 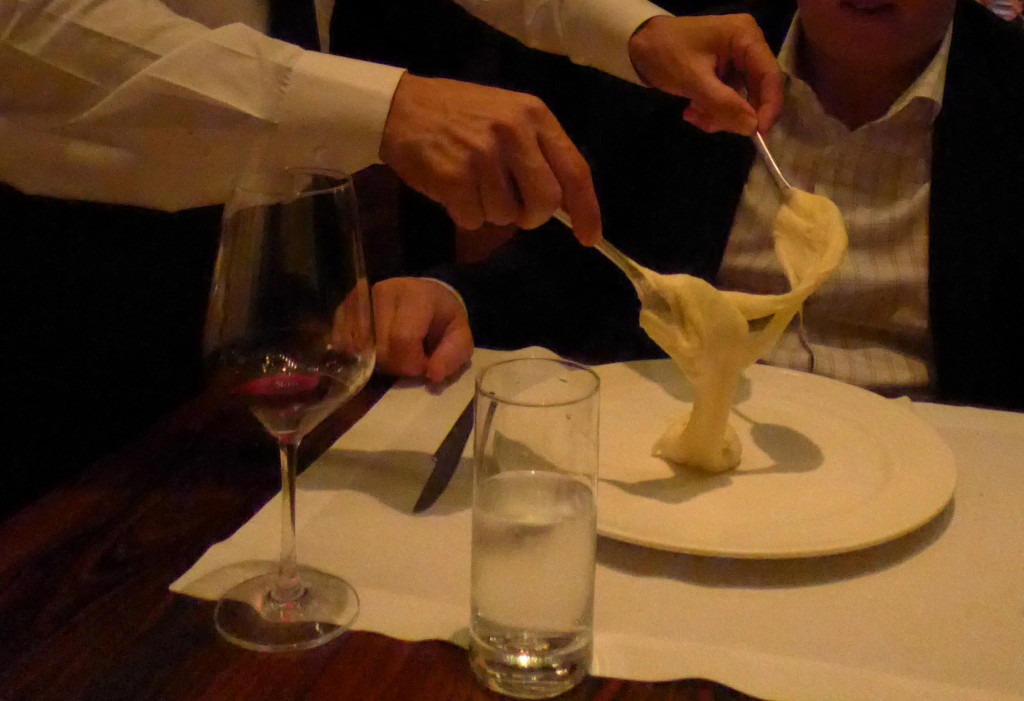 Another dish me and my partner enjoyed a lot, and that was served in both – the normal eight-course and the Vegetable kingdom menus was the Aligot. The sticky, gooey and heavy form of the potato mash with cheese was a fun game not only for the waiter serving us a dab of the aligot on our plates, but also for our amused mouths chewing it.
The dessert looked more country-style. The Baroa Potato Glace, chocolate from Combu Island and Brazilian honey been chantilly was very sweet since both the potatoes and the whipped cream were infused with sugary condiments. I enjoyed it much more while sipping on the Cumaru water served with it as a part of my water pairing menu. 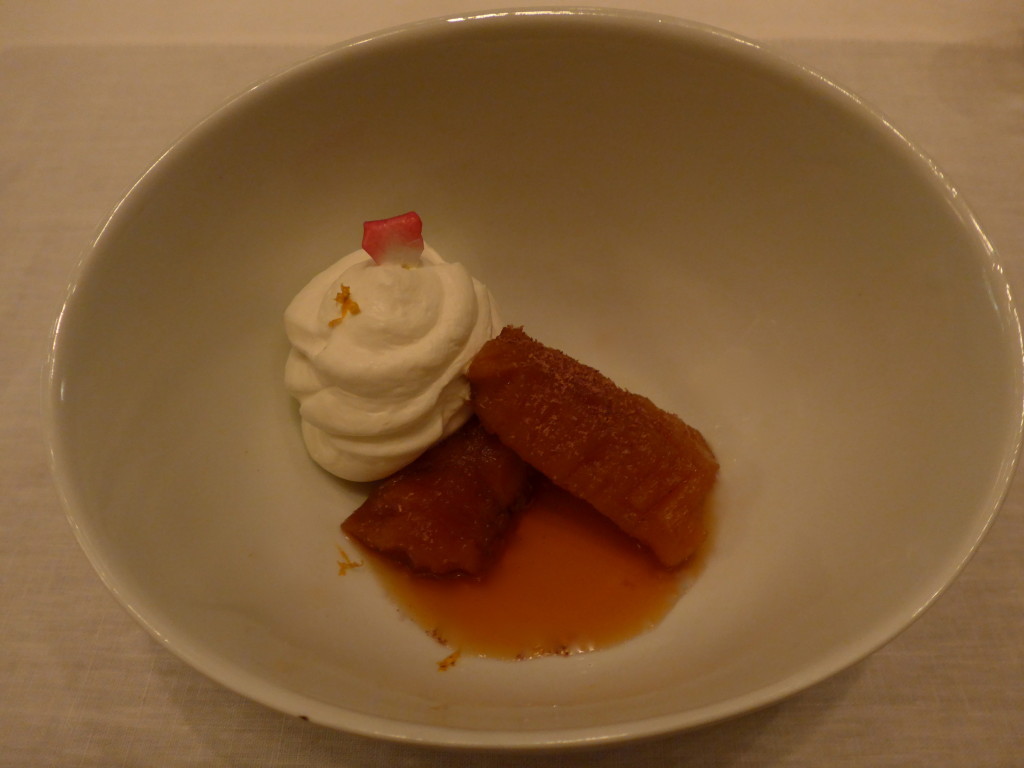 Bringing non-alcoholic drinks to the pairing

As is common in gastronomic restaurants, a wine pairing is offered with the tasting menus. The wine list at DOM is very good and broad. Wines from all over the world including some local Brazilian produce. The great value Brazilian sparkling wines were offered only by a bottle. Quite a shame, since I would rather sip a local apéritif than Champagne in Brazil, and more sustainable.
I had to try the unusual ‘Water and fruit essences’ drinks pairing option, and was smacked how pleasant and incredibly balancing to each course these alcohol-free beverages were! The servings were small, so no worries that you will stuff yourself with liquids instead of the food. Guava and vanilla water mellowed the sea dominant flavour of my first course, Fennel water was like spice to the Brazilian beans, Parsley and pennyroyal water gave more flare to the boring rice and artichoke bowl, Infused toasted rice and tea deepened the light nature of the palm heart fettuccine, Jabuticaba granita was like a frozen dressing to the vegetables, and the Cumaru water tamed the sweetness of the glazed potato dessert.
The healthy and revealing marriage of flavours for the new health-centric food trends millennium is impressive, but will not necessarily drive me back to D.O.M. I much more prefer the other local and sustainable feast at Mani. It is more casual and fun.
Lunch Mon-Fri: 12noon-3pm; Dinner Mon-Sat: 7pm-midnight; Closed on Sundays
Rua Barâo de Capanema, 549 – Jardins, São Paulo, Brazil
+55 11 3088 0761; +55 11 3081 4599 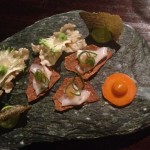 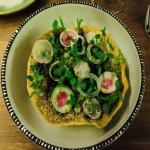 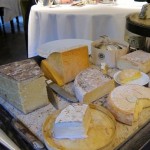 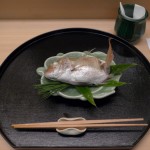 Kichisen: refreshing the taste and style of traditional Kyoto-style kaiseki