A chef tagging his name on a restaurant is putting himself under a great risk. He must trust his appointed teams, however skilled and dedicated, that they will consistently deliver what the customers expect.

The French chef Joël Robuchon holds the record 31 Michelin stars (as of 2017) for restaurants bearing his name. There is no other chef to date, who would achieve such a distinction from the most famous restaurant guide in the world – the Michelin Guide. As he spreads his brand globally I have had the opportunity to dine at most of his restaurants including the first and perhaps most casual Le Atelier de Joël Robuchon in Paris, London, Hong Kong and in New York as well as at the more formal restaurants in Monaco, Macao, and in Singapore. 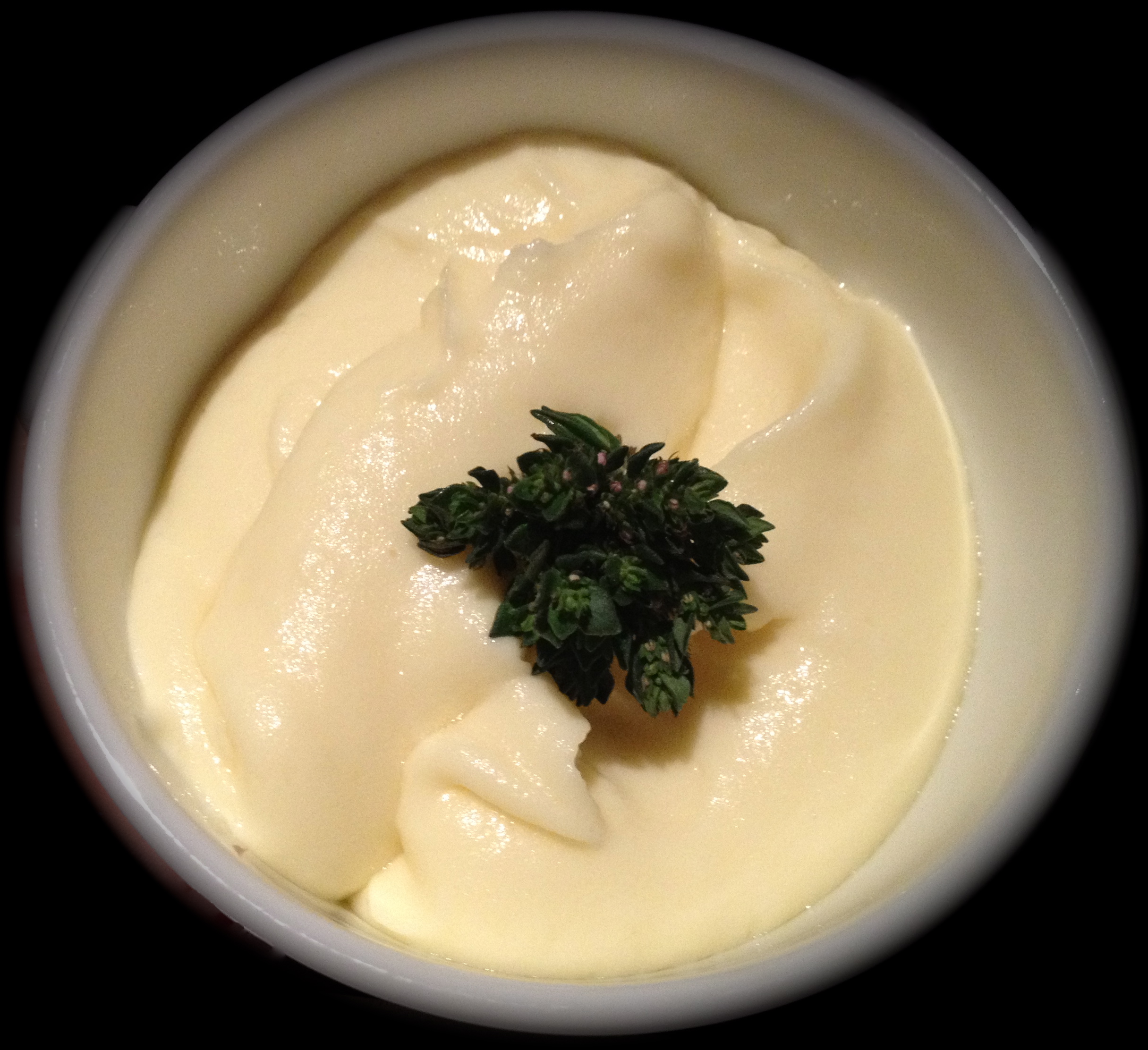 Over the years I have learnt one very important thing about the restaurants set up by one chef in different locations across three continents. Even the holder of “The Best Restaurant in the World” title, which Robuchon earned by the International Herald Tribune in 1994 for his restaurant in Paris, can disappoint. Well, for those of you indulging in ultra rich old school French and American flavours Robuchon delivers. Once his cuisine might had been extremely appealing, for he was titled “Chef of the Century” by Gault Millau in 1989, and the “Meilleur Ouvrier de France” in cuisine in 1976, but in the new millennium with accent on finesse, lightness and focus on ingredients rather than masking everything with too much of cuisine, his food is slightly outdated. Still, you may love it depending on your mood and taste preferences. I explain why. 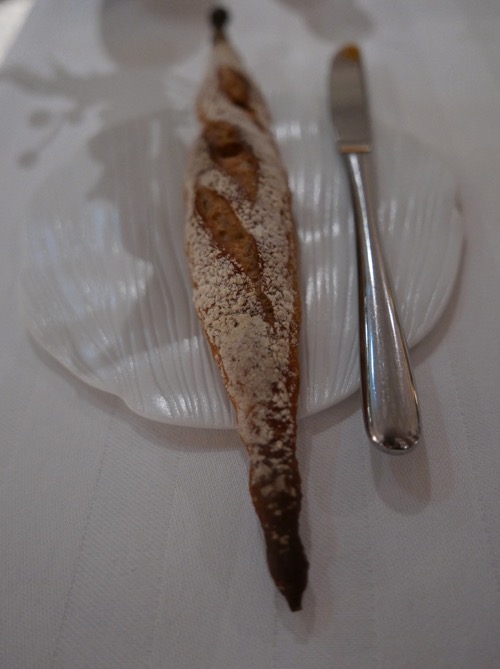 Joël Robuchon has a number of signature dishes such as the exquisite Lobster Ravioli or the super smooth buttered Mashed Potato puree (50% butter!) that let you enter the heaven of taste, and so does the bread cart. Yet, there are many other more seasonal and locally adapted creations that, for the insanely high price are seriously disappointing to that level, that one cannot finish even the tiny portion from his “small dishes”. If you plan on eating at one of his restaurants be prepared that you will not be getting much value for your money spent. A chef tagging his name on a restaurant is putting himself under a great risk. He must trust his appointed teams, however skilled and dedicated, that they will consistently deliver what the customers expect. Since today many diners travel extensively and have the opportunity as I do to try the various restaurants under one chef, thus having a valid point of reference, it becomes extremely challenging to please them. I used to love The Atelier in London in its first years, but as it started to be inconsistent, I stopped dining there. Macao was also overrated, as it made for quite a spoiled birthday dinner of mine. The rare to see wine list saved it though. The same might apply soon for the Monaco venue, but Hong Kong and Singapore were both solid when I went. 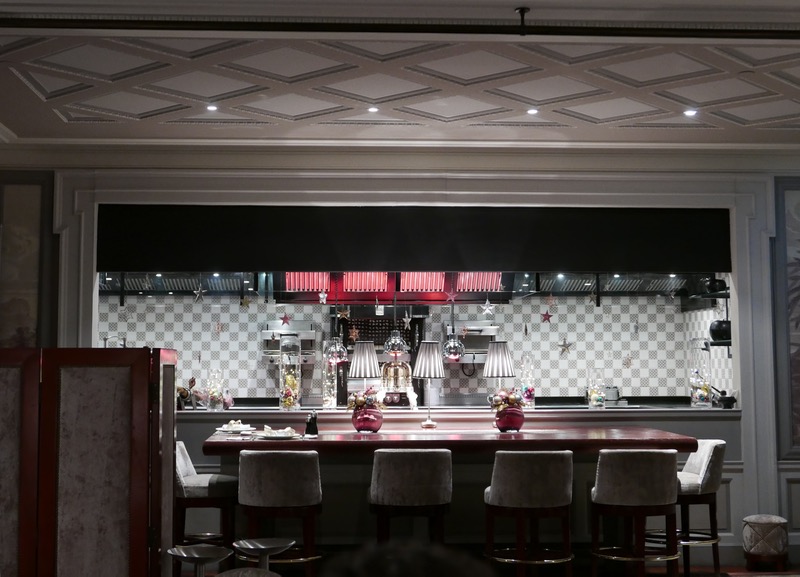 In Monaco (2 stars Michelin) the responsible chef has been for years Christophe Cussac whose experience in gastronomic French cuisine is according to the books, but he does not seem to grasp the Robuchon’s touch using Japanese and Spanish ingredients and techniques. I dined there in 2010, 2011, 2012  and most recently in January 2017. The long gap was because there are just many better Michelin stared restaurants to dine at around the French Riviera. From Alain Ducasse at Hotel de Paris, nearby La Chevre d’Or in Eze to the “magnifique” Le Cap at The Four Seasons Grand Hotel du Cap Ferrat.
In a beautifully decorated and elegant room of the Metropole Hotel you feel almost majestic. Luxurious and comfortable chairs, Persian carpets and the extraordinary, attentive service make the dining experience a joyful affair. The clientelle is mostly coming from an affluent background, ladies adorned with a stunning jewellery, Hermes Birkin bags and mostly older gentlemen sipping on vintage Cognac after their dinner. Yet some come with the entire family to celebrate birthdays since the restaurant feels cosy. 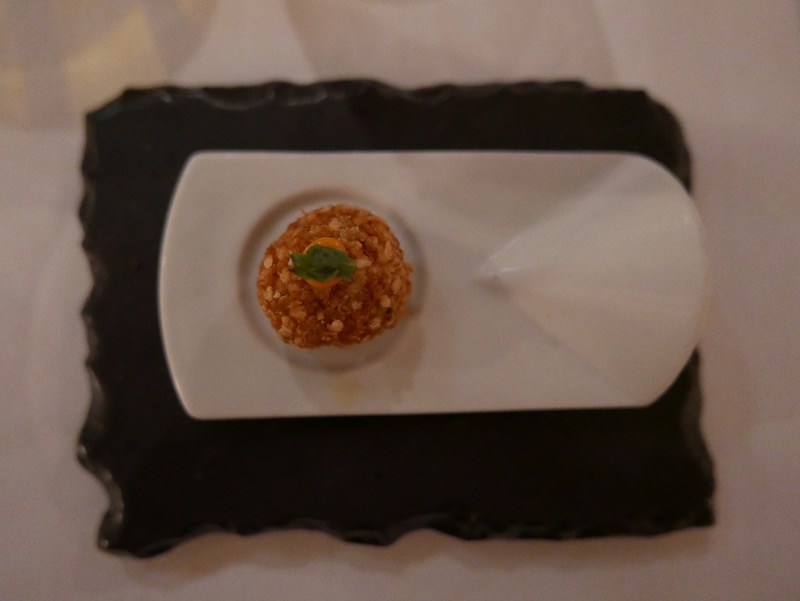 The food at Robuchon is ultra rich, flamboyant, striking and buttery. His plates are not about delicate, elegant representation of ingredients, but an indulgent, suckling carnivorous affair. His recent book Food & Life follows the healthy eating trend and inspired his new eight course, plant based and gluten-free menu (€98 coffee or tea with desert included). The vegetarian tasting menu that I tried on the most recent occasion was just a mashup of incoherent dishes with no apparent connection between each other. I never felt one ingredient staring, just too many flavours hitting the palate. I was struggling to make sense out of this trendy effort of Robuchon. Certainly, this menu was created to accommodate the increasing number of vegetarian and gluten-free food requesting customers, but if you dine at gastronomic restaurants often or if you are not a vegetarian and just balancing your diet with some meatless meals out, then do not go for this menu at the Robuchon. His seafood and meat-centric cuisine does not seem to comprehend the delicate beauty of vegetables. 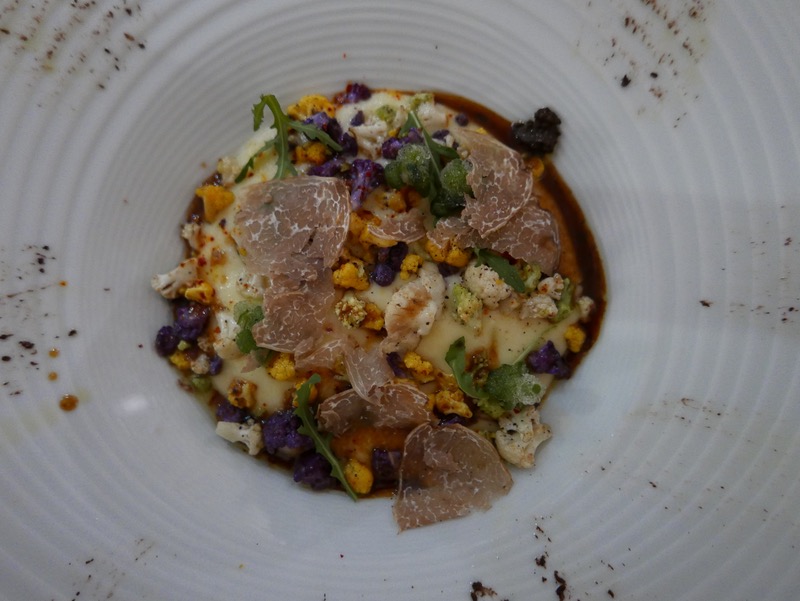 The first bite from the vegetarian menu after eating the always superb ultra crunchy baguette with a slab of unctuous butter that all Robuchon’s restaurants do so well, was the Quinoa crusted golden ball with smoked piquillo. The spicy bite of the Spanish piquillo chilli was so minimal that the only taste I was able to distinguish was the dry nutty quinoa, boring. Next came Pumpkin light ice cream mushrooms marinated in pistachio, a cold dish that I could not understand. Why pumpkin with marinated mushrooms? It just did not taste very good together, I could not finish it and had to spoon out a bit of the crab from my husband’s plate. That was just a start (later I would order a plate of the tested and tried mini-burgers and cut a morsel of the veal off my also slightly disappointed husband – both, the burgers were too sweet and the texture of the veal was just too dry). In the third veggie incarnation came the saviour, Crucifer with olive couscous, mashed potatoes and white truffle. The buttery potato mash and the always special white Alba truffles saved the colourful heads of cauliflower scattered all over. 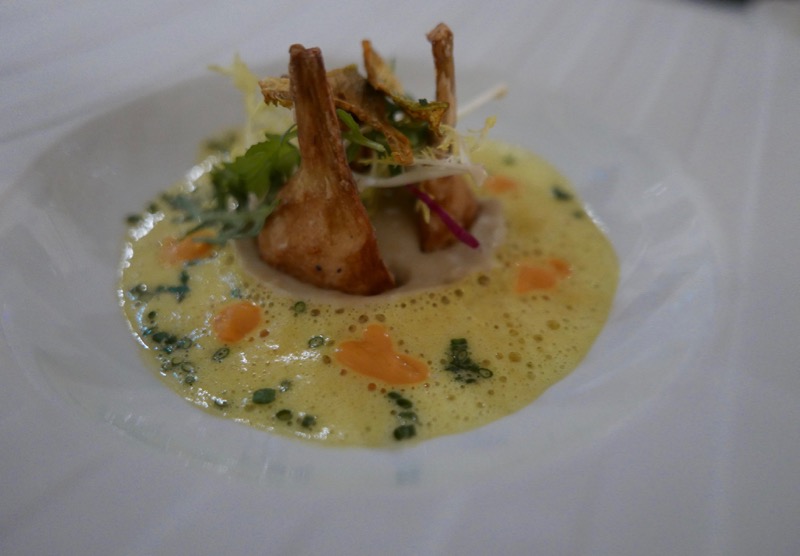 Another plate in this seasonally nuanced menu that remained from the beginning (with the quinoa) was the Artichoke roasted and unctuous covered with a chickpea and turmeric cappuccino, which was very nice, but quite rich after the previous ultra unctuous mashed potatoes. Then came Salsify golden on a red miso hummus, hazelnut emulsion that was poured over the plate at the table. 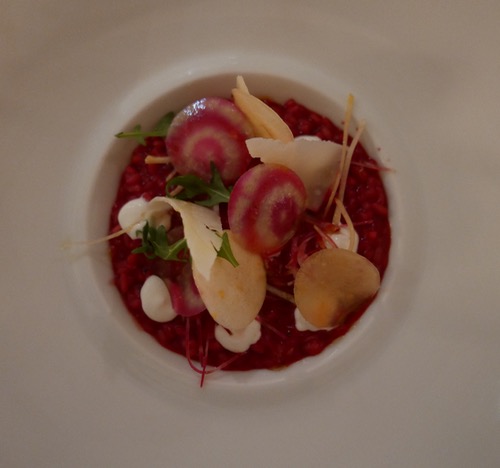 Good, but the following Rice risotto style with beetroot and parmesan cheese shavings was by all means as all of the plates beautifully presented, yet I much more prefer the Italian risotto style than beetroot in my rice, sorry. To finalise the erroneous menu selection was the dessert Citron de Menton candied in light cream with poached pear, served in a transparent glass, topped by golden leaf and lime underneath. Too sweet and overpowering the exquisite Menton lemons that I buy often at the local farmers market. Vegetables are my favourite gifts of nature, but in my mind I was crying: give me some cheese, fish, meat or seafood, please Mr Robuchon!
On the small plates menu, well this is quite a large cut, the lovers of a great Spanish ham will not be disappointed by LE JAMBON IBERICO DE BELLOTA thinly sliced and served with a toast. Still, in Monaco you can get at least as good Bellota at Avenue 31 for less. For anyone liking soft and delicate scallops with slightly crusty touch the Scallop in its own shell with crunchy vegetables and sprinkle of powdered paprika will be a great choice – a flavour bursting piece of seafood mastered perfectly by the great chef. 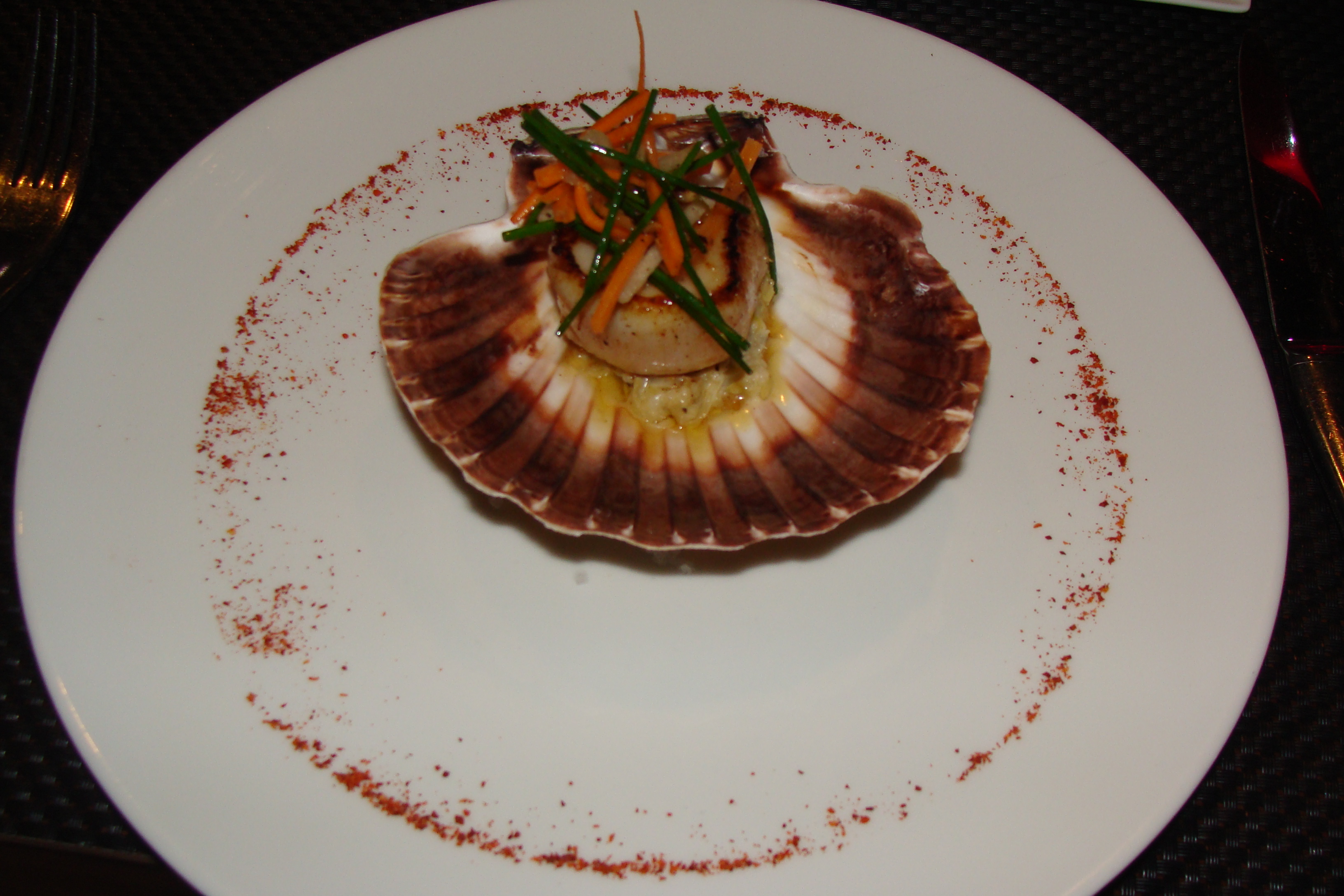 An absolute winner from the starters for me remain the Lobster Ravioli. They will hit your budget slightly as you will pay a bit over €50 for this tiny snack. LA LANGOUSTINE en raviolis truffés à l’étuvée de chou vert is served with truffles and cabbage, and I fell in love with it the first time I tried them a decade ago. The delicately cooked lobster is so tender and interesting, with the unlikely green cabbage and truffle combo, that it always charms everyone who has ever eaten it with me on the table. I want two, €100 and still hungry!
Eager to experiment I have burned myself with the choice of Smoked Mackerel with Asparagus. The mackerel was unpleasantly slimy that I could not finish it. So I gave a chance to another fish, this time in red wine sauce with fried onions, and mushrooms. It was nice, but not outstanding. To fix my taste, I ordered another tasty dish I knew from the past Robuchon encounters – the non-vegetarian Purple artichoke with chorizo and thyme cooked in Morrocan tajine style. Covered by a conic top L’ARTICHAUT VIOLET à l’encornet au thym et au chorizo en tajine is a tasty blend of exotic spices exposing themselves as the lid is taken away. Intense and playful. In this case I would say that the vegetarian artichoke was equally good. 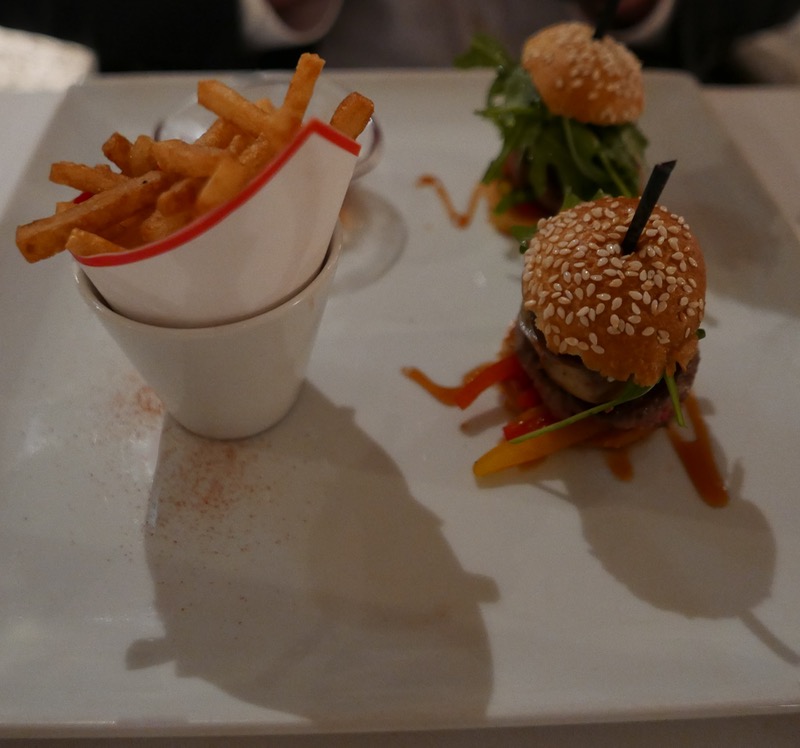 The beefy Mini burgers with seared foie gras and onions served with hand cut fries used to be the best burgers I have ever had, but these beef juicy nibbles are served with an ever sweater sauce spoiling it all. What a shame for such a great peace of meat and sesame bun.
Staying in the meat realm LE VEAU en paillard aux feuilles de riquette et artichaut poivrade, a thinly pounded veal with artichokes is one time tender as it is cooked just right, but on the last ocassion the meat was too dry.
The cheese offer was reduced by a large stride. Only the most famous French cheeses, comte et al. come for these preferring savoury finish. Top quality was maintained.
The desserts trolley is provoking everyone as the waiters whizz it from a table to table. Whether you are full or not, you will probably end up getting one. The chocolate cake, the crumble pie and the mouse with vanilla cream are all great traditional French pastries. 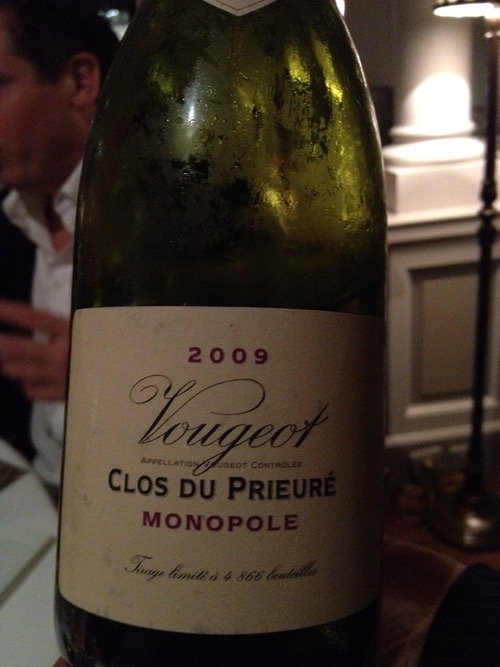 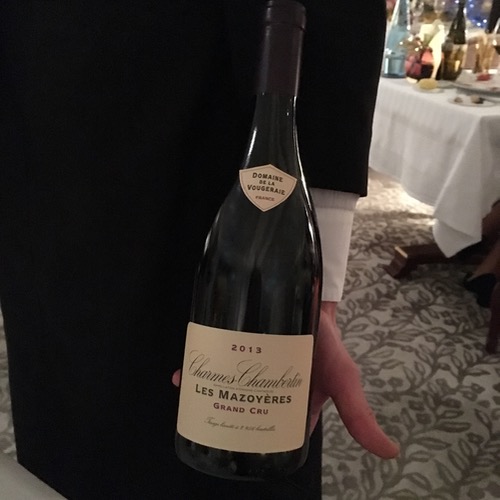 Drinks: The wine list is quite modest for a restaurant of such a calibre, but if you are after French wines, you will find a good bottle. The head sommelier has worked at Robuchon in Monaco since I remember going there. The Chardonnay from Clos de Vougeot by Domaine de la Vougeraie is quite a rarity. We went for the same producer’s red Pinot Noir Charmes-Chambertin Grand Cru 2013 and despite the wine’s youth I was drinking just perfectly. Another nice surprise was the Riesling from Alsace by the glass, and the Loire dessert wine Beaulieu by Château du Breuil, which the sommelier treated us to (free of charge) with our desserts. Not too sugary, yet honeyed tones were playing with the fruit and flower flavours like a bee savouring these delicacies of nature before honey is created.
Price: Sky-high expensive (many tapas style “small dishes” in the €30 and well above level)
Daily for lunch: 12:15-2:30pm; dinner: 7:15-10:30pm
+377 9315 1510