Named after a flower native to the chef’s Auvergne region of France, Astrance sourcing from the exotic African coast, Asia and Australia globalises in Pascal Barbot’s contemporary, light French cooking. Today, it is beguiling to define a nation’s cuisine after all, and Astrance is a proof of the delectable culinary confusion. In his forties, still resourceful, the chef Barbot does not shy away from using far-away ingredients such as Mozambique prawns, Brazilian pepper, Japanese sodachi citrus and Australian truffles instead of nearby produce. The flip of a coin of Alain Passard’s and Ducasse’s local sourcing. 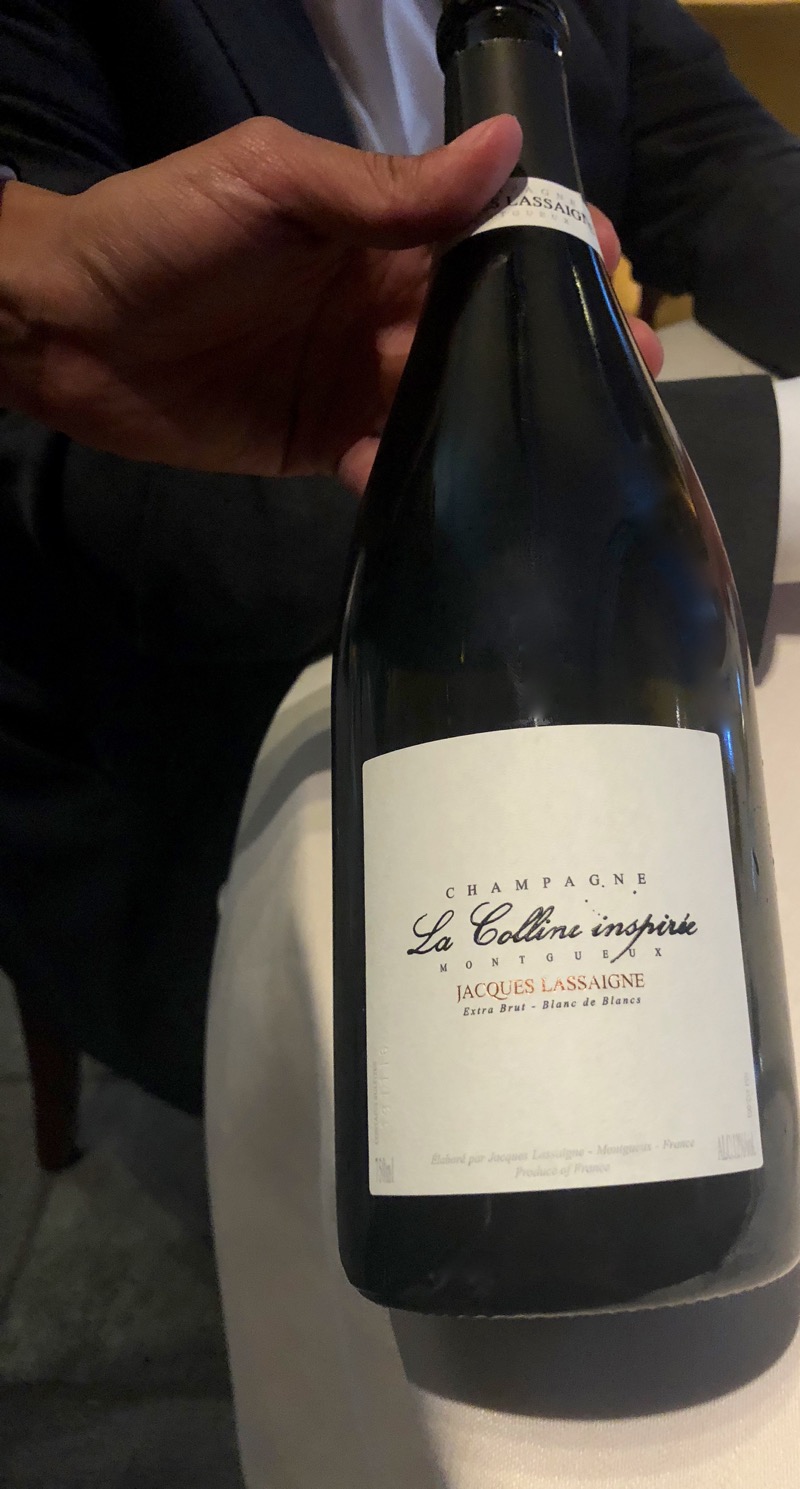 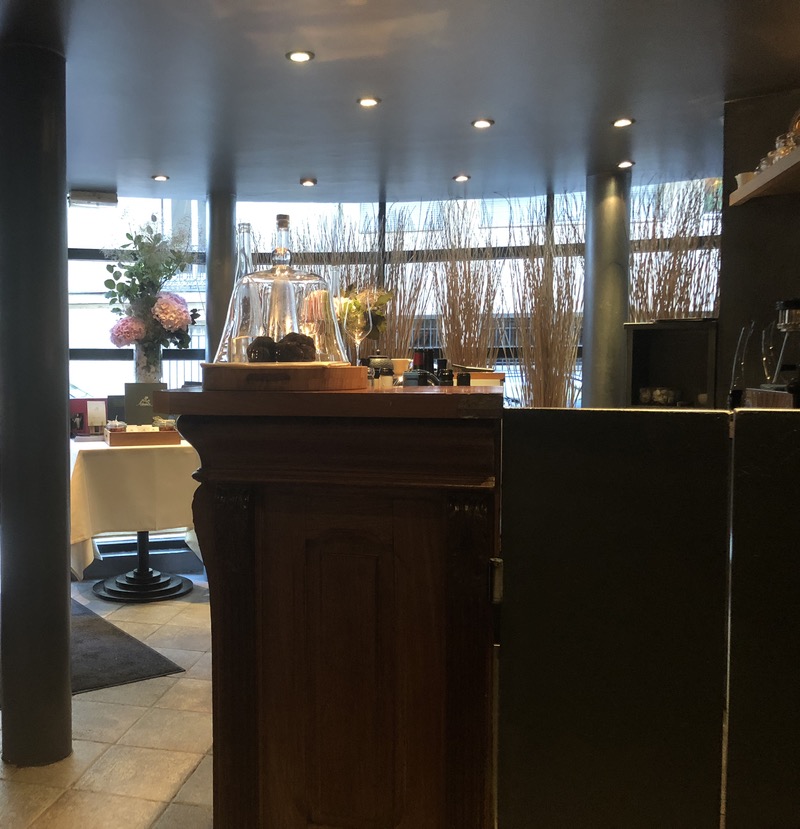 The compact, open-plan two floors spanning room seats about 25 guests had two available tables during the entire dinner service, the rest occupied by mostly Asian diners, so after the initial snotty attitude as we entered in the notoriously hard to reserve Astrance felt like victims of mischief. Despite a dry welcome by the staff, we settled on gambling our money on the food’s reputation. And it started marvellously. After a clumsy, imprecise information about the wines offered as an aperitif by the glass, I tasted a sip of Loire’s white mineral Chignon, but went for the exquisite blanc des blancs champagne La Colinne Inspiree (literally “inspired by the hill”) by Jacques Lasaigne. Wine saves the malice of men, I thought!

Astrance employs that badly reputed Parisian service, arrogant, unamiable and cold. Topping the three Michelin star experience one of the waiters was incompetent enough as to not knowing what was being served – claiming that a tooth fish was a red mullet. The manager is the co-owner with the chef Pascal Barbot, who has for over a decade nested comfortably on the summit of the Parisian gastronomy with his three star badge, I wonder how much longer he will uphold this coveted trophy. They met at Alain Passard’s Arpège in Paris, where Barbot climbed the kitchen echelon to the head chef post. The duo later formed a young team opening the bistro-sized Astrance in a cul-de-sac bordered by a formidable staircase of the plush 16th arrondissement. 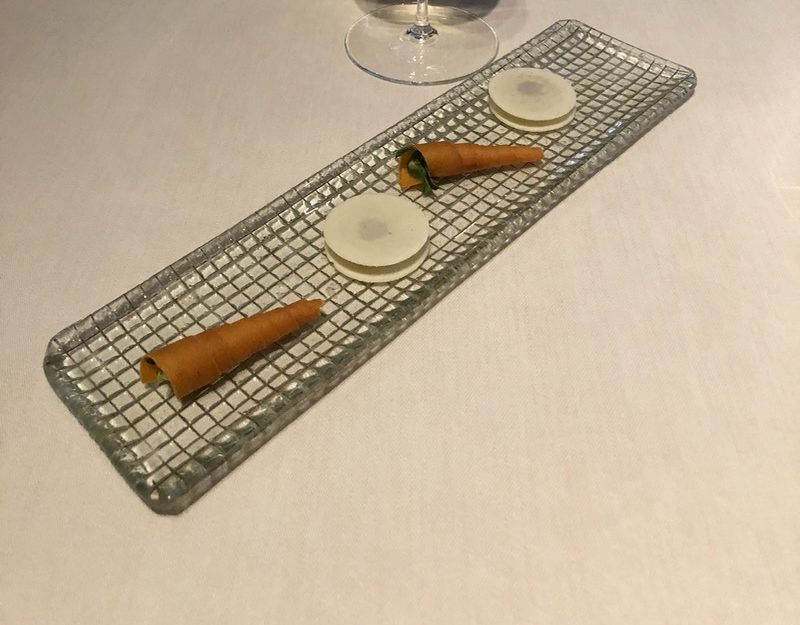 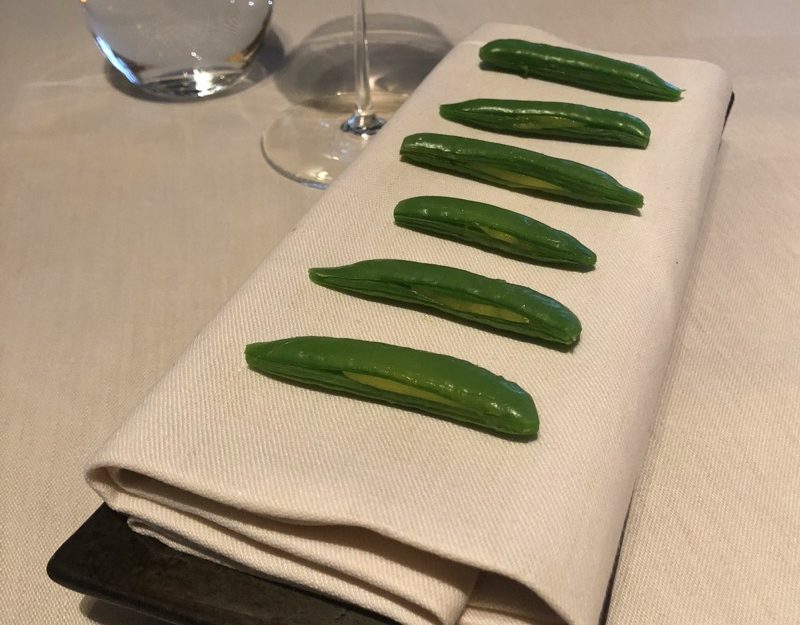 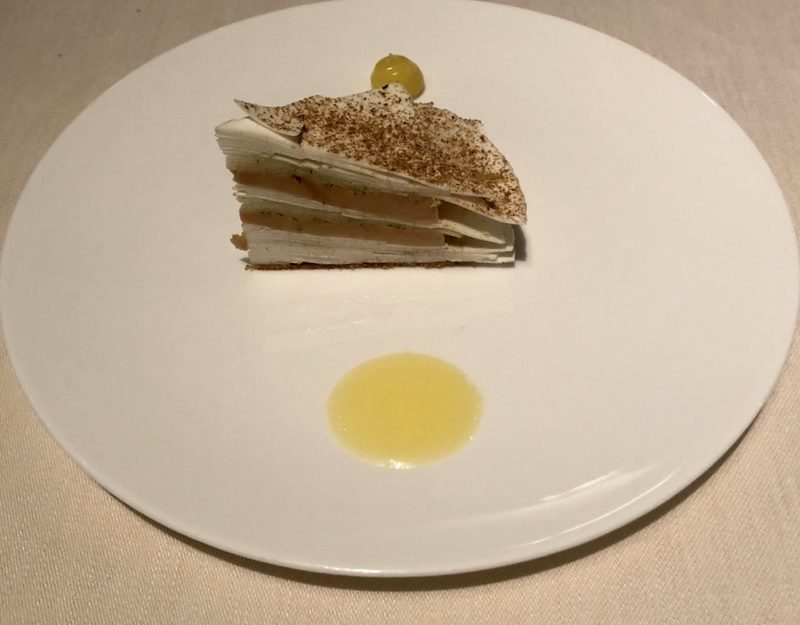 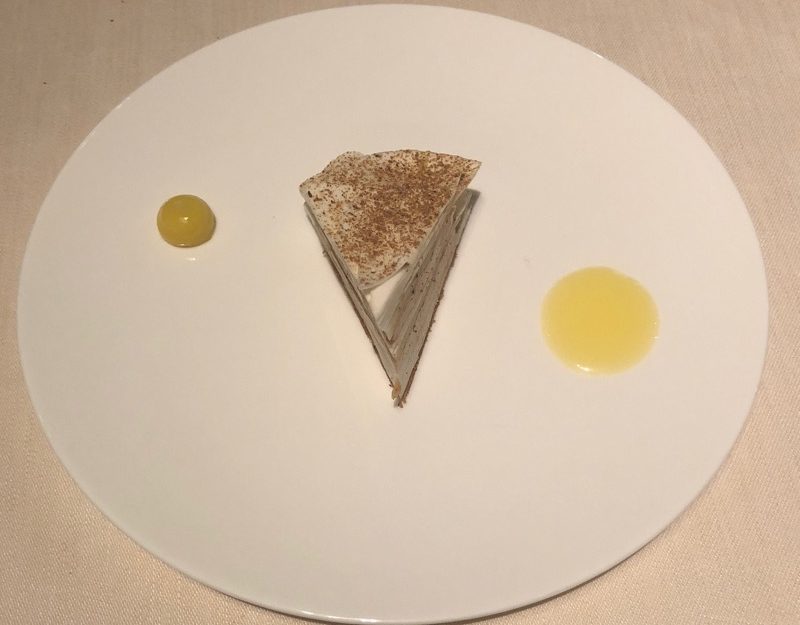 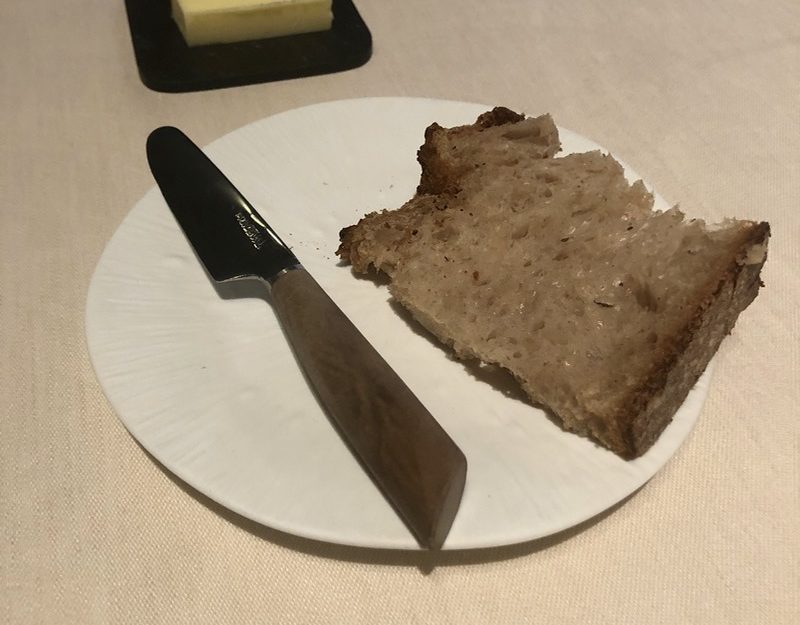 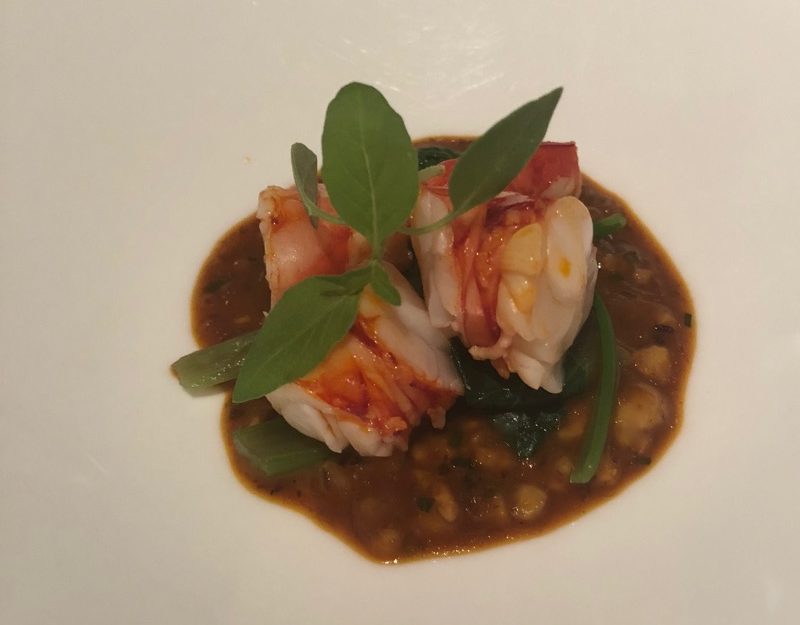 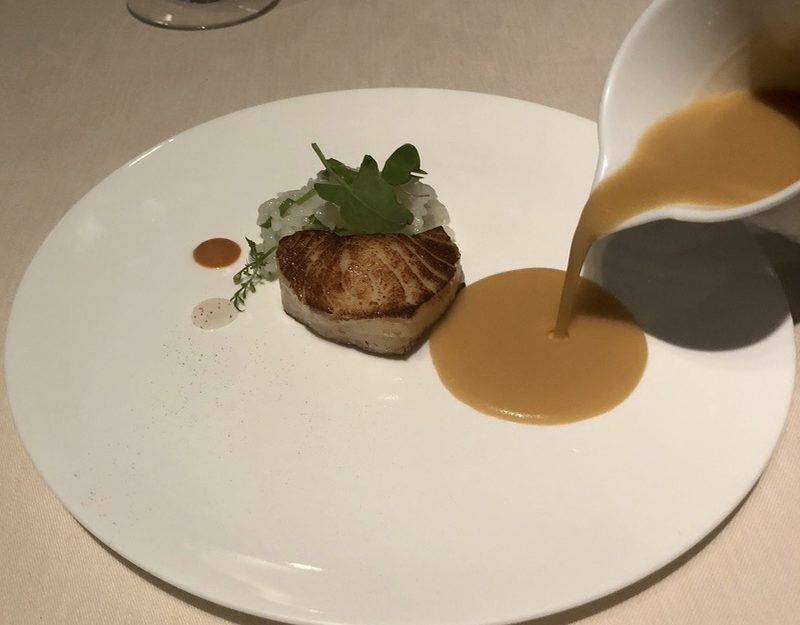 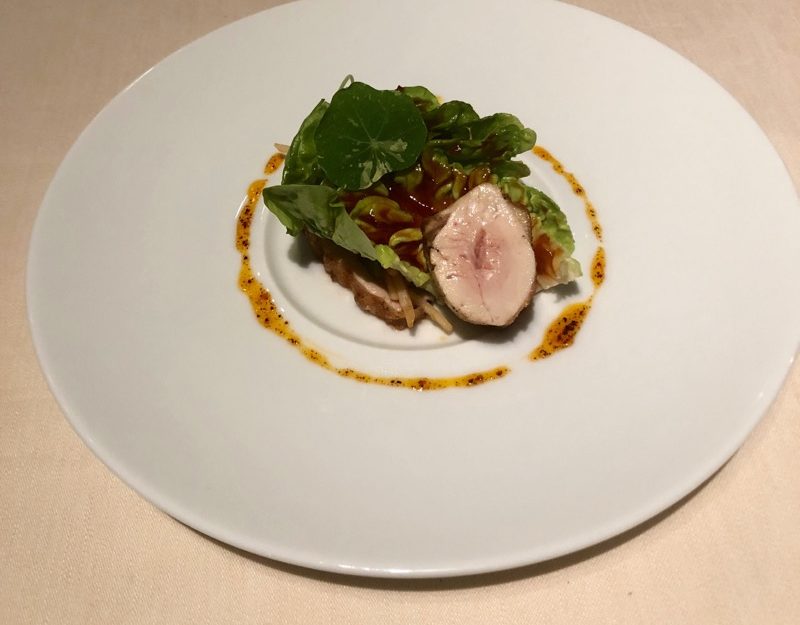 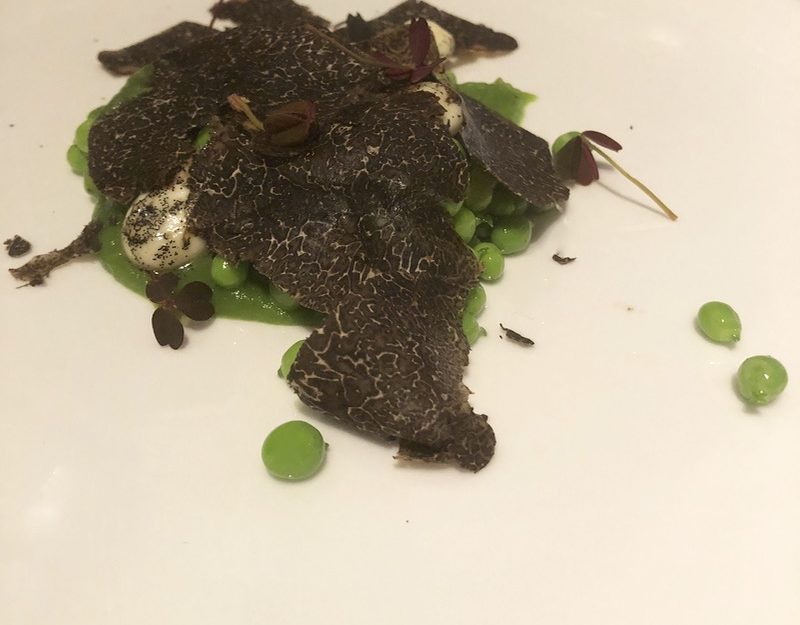 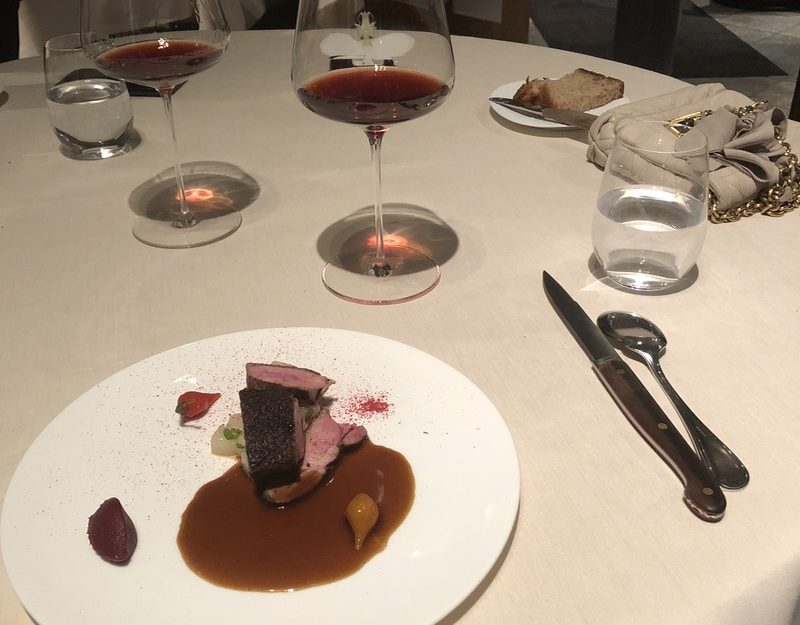 0
During our three hours lasting “Astrance menu” that night many dishes impressed us, while some left us cold. There is no à la carte option, so you just pick one of the tasting experiences.

A country loaf in Passard’s moist with a crunchy crust superb rustic style (Miche) but sliced like a fruit cake was served with a deep yellow, wholesome slab of butter.  The food was mellowing our soured moods, delicious in its simplicity, while introducing a subtle new touch to each main featuring ingredient.

‘Tarte au foie gras, champignons et agrumes’, the signature raw porcini layers with a foie gras crème filling dusted with dried porcini powder, sweet lemon confit and a spot on side of hazelnut oil looked like a slice of savoury tiramisu. It was far better though. The recipe is evolving and has slightly changed over time since Elizabeth on Food, the Amsterdam-based independent food blogger, wrote in 2013: “A crunchy and lightly caramelised pastry base, topped with layers of thinly sliced, juicy white button mushrooms, sprinkled with citrus zest such as orange and lime, thin layers of crisp green apple, a fat layer of creamy foie gras and a top layer of mushrooms sprinkled with some dried porcini powder. With the tarte came an intense bitter-sweet and zingy lemon confit puree and a concentrated hazelnut oil. Simple, pure, yet so sophisticated.” I totally agree with the last words, this was also the most impressive dish at Astrance.

Followed the Mosambique wild prawns popular with gastronomic chefs in Europe today. Gently cooked with an Indonesian peanut sauce, coriander and ginger as an incredible encounter between Asia and the French cooking that was not spicy, but another stunner on the Astrance carte blanche menu. 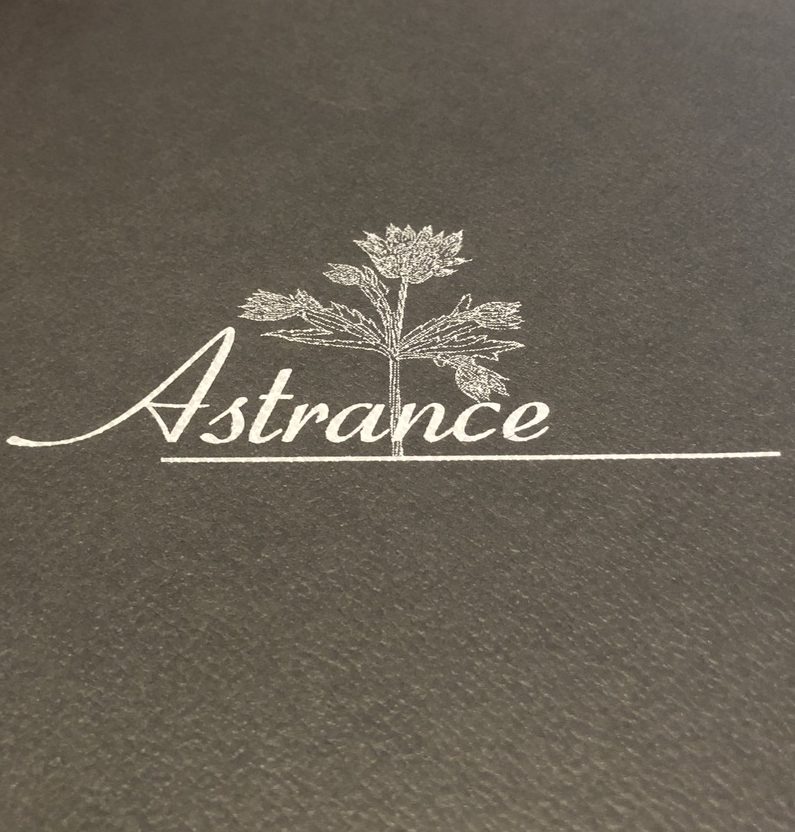 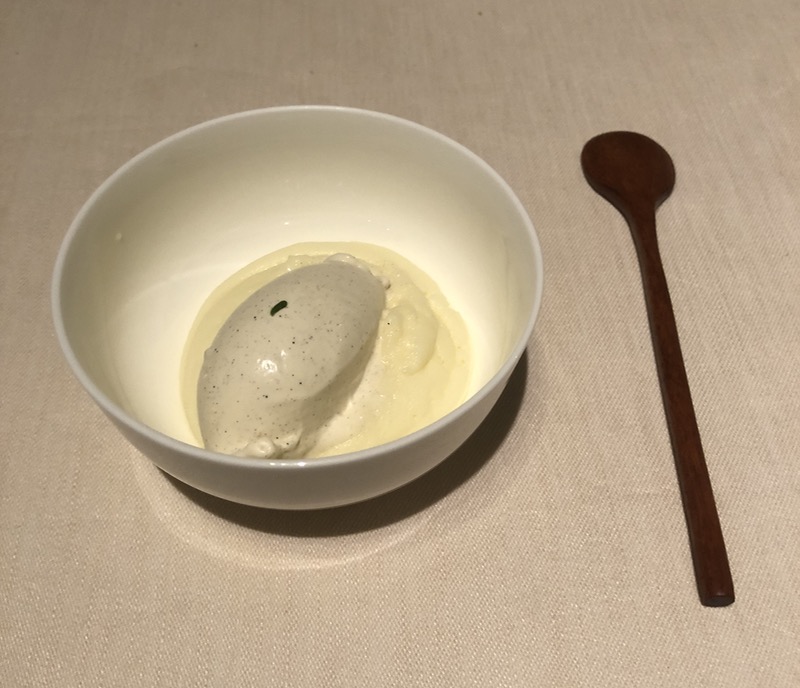 Chef Barbot worked in Sydney where he grasped the breaths of Australian produce like tooth fish and the beautiful inky black truffles, that we devoured for the first time. My husband had an extra plate with “un peu” des truffes, to their credit quite a generous shaving of the aromatic fungi over blanched green peas. An unusual pairing, but good. My own house recipe of creamy avocado with truffles and a drizzle of olive oil works better, try. The Australian, cod-like but drier, tooth fish with sodashi lemon reduction, a dollop of cod liver served with Japanese sticky rice and spring onions was excellent, rich yet balanced.

Some ingredients were more locally sourced. From the South of France came a tender chicken served with its skin in a spicy sweet and smoky espelette pepper sauce reminiscing a Hungarian goulash. Shredded turnip and a pungent nasturtium leaf (not as potent as in my garden though) added the typical Barbot surprise flare.

A variety of French duck cuts coked medium, poured over with its reduced jus in a company of white spring onion bulb and a red beet purée. A paté-rich duck liver was spread on toasted bread. Delivers for serious duck lovers, but not picky omnivores. 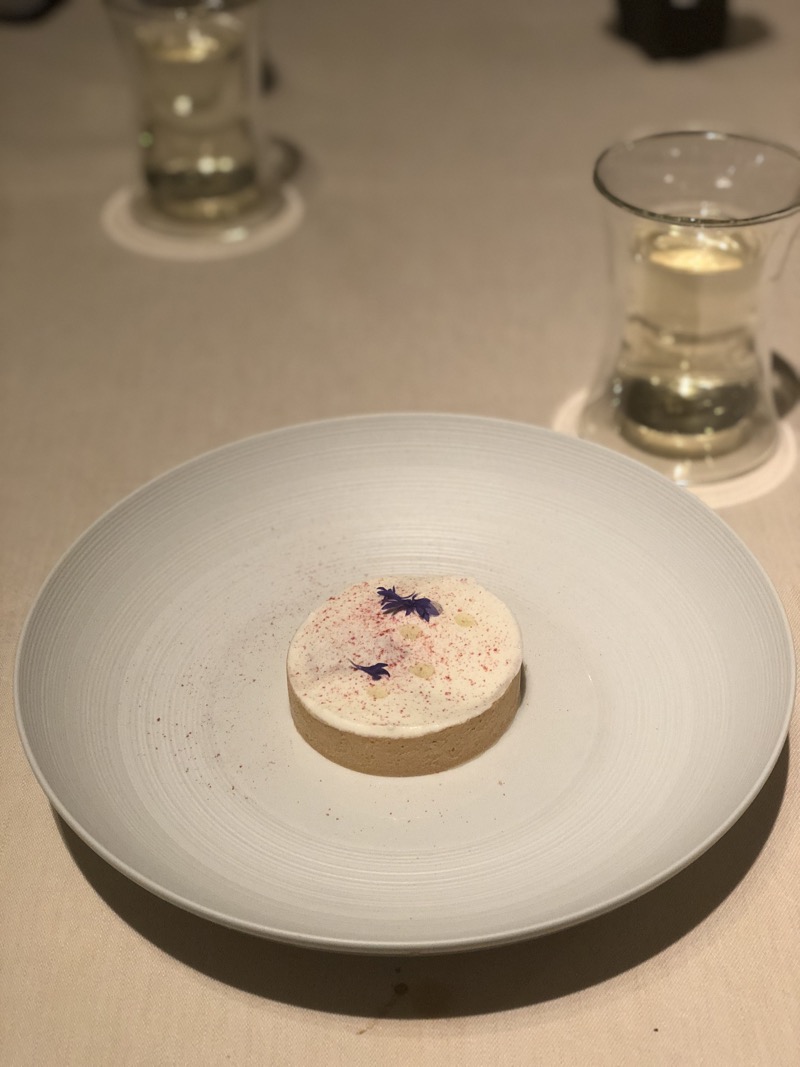 No cheese dish was served since desserts stepped in. A weird, close to terrible rich vanilla cream with verbena infused mashed potatoes that tasted like the instant version from a supermarket – dry and grainy.

Then a saviour embodied in a sublime seasonal rhubarb compote tart, topped with an aromatic and delicate jasmine foam fixed our soured palates. Holding form by a hard pastry ring, the dessert was seasoned with borage-sour rhubarb freshness. Not as revelatory as the previous night’s marjolaine, rhubarb and strawberries with cream at Vins des Pyrénées bistro. A house blended herbal infusion was served in a double glass cups as a digestive.

At the finale, petit fours landed on our white cloth table. Tiny chestnut honey madeleines with a nice crunchy bite, seasonal fresh quartered apricots, ripe cherries, sweet strawberries, succulent giant raspberries and blueberries, next to the chef Barbot’s signature Jasmine eggnog served in an eggshell to be sipped from. The June fresh fruits were extraordinary, but the weird combination of rich egg liquor with fragrant Jasmine was like a bad perfume, disturbing. 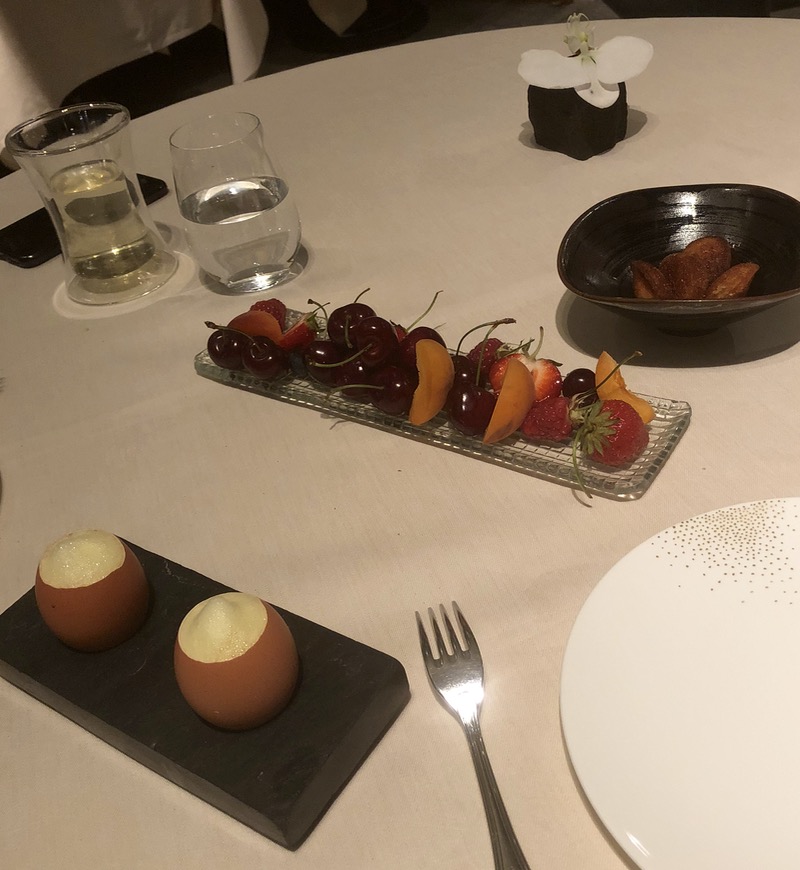 The last half of the tasting experience did not persuade us to come back any time soon. There are so many excellent restaurants in Paris, and we much prefer to dine at Arpège, Ducasse at Plaza Athenèe, the Bristol and other three and two star queens before returning back to Astrance. We even did not get the menu printed at the end of our meal, so if I was not inquiring multiple times after each course was served, I would just came out like a stuffed blank slate.

Work and life balance appeals to the chef and his partner since Astrance is only open four days a week (also during August when everything else shuts doors in the French metropolis). You can start calling two-months ahead for reservations, but last minute cancellations can slip you in. Magnus Nilsson of Fäviken in Sweden worked at Astrance, but later created his signature Nordic cooking style, more generally popular today than the new French food.