From globe-trotting chefs through hedonistic festivals to local Alpine indulgences, St Moritz has flexed its gastronomic muscle on the moneyed workout supplied into its Swiss mountain for decades. Before Courchevel (and Les Trois Valées), there was St Moritz. More, the glistening lakes, see-and-to-be-seen stage stretches its red carpet beyond the ever briefer winter snow season, and your palate’s whims won’t come short anytime of the year. 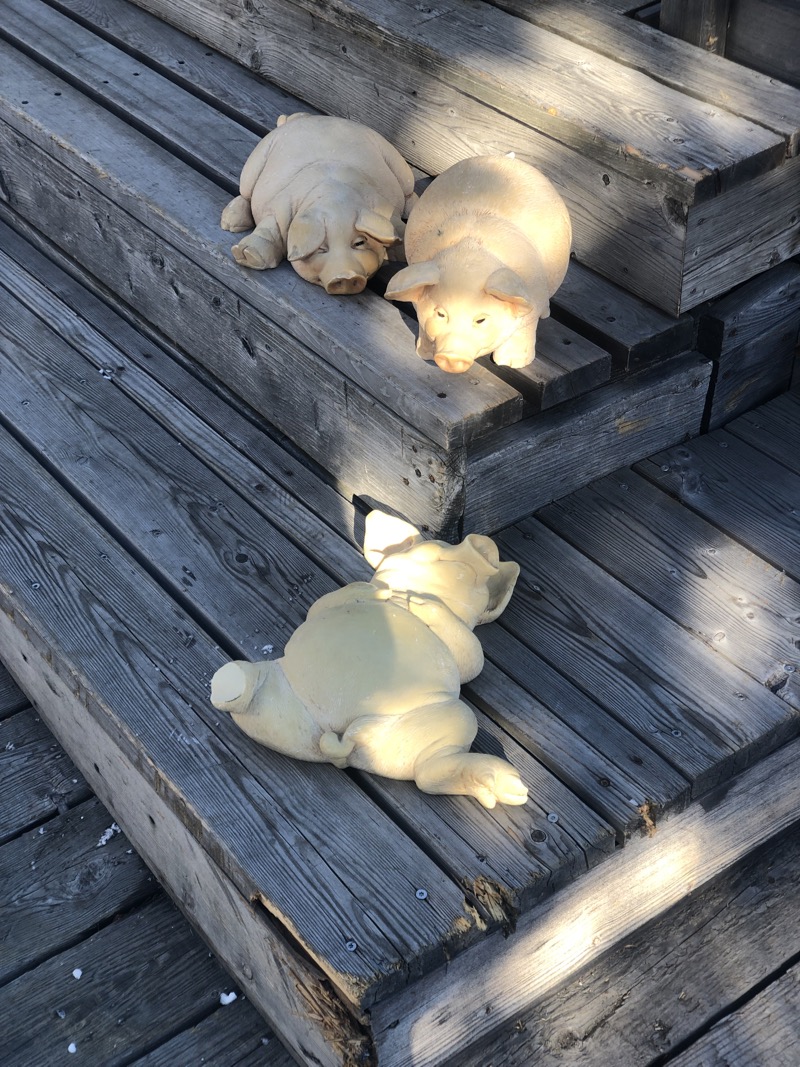 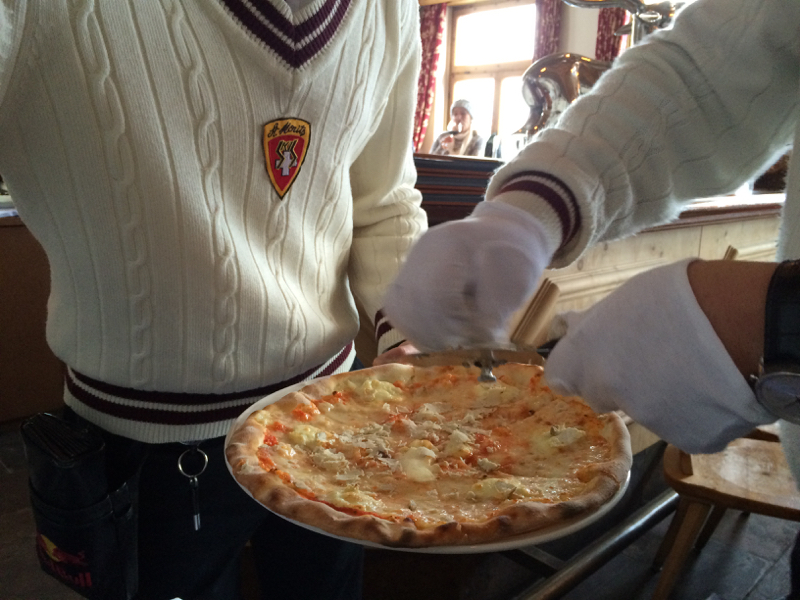 Gourmandise has always been indulged in the posh resort where movie stars and the European power jet set spoon caviar from silver goblets, truffles are shaved over anything like salt flakes, and seafood is flown or driven daily from the Milan fish market for its utmost freshness. An annual St Moritz Gourmet Festival draws in the world’s most celebrated as well as the up and coming chefs. At the grand hotels, this is a dressy affair, while some of the multi-course tasting dinners are set in more casual, redressed conference and dining rooms in the area. 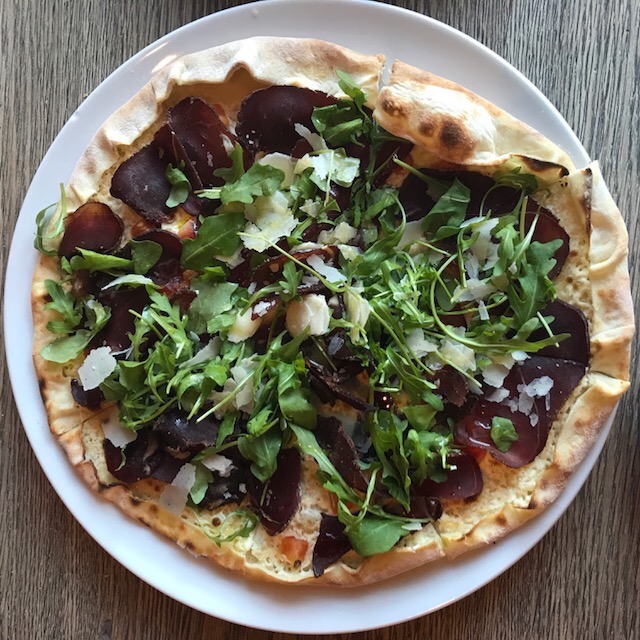 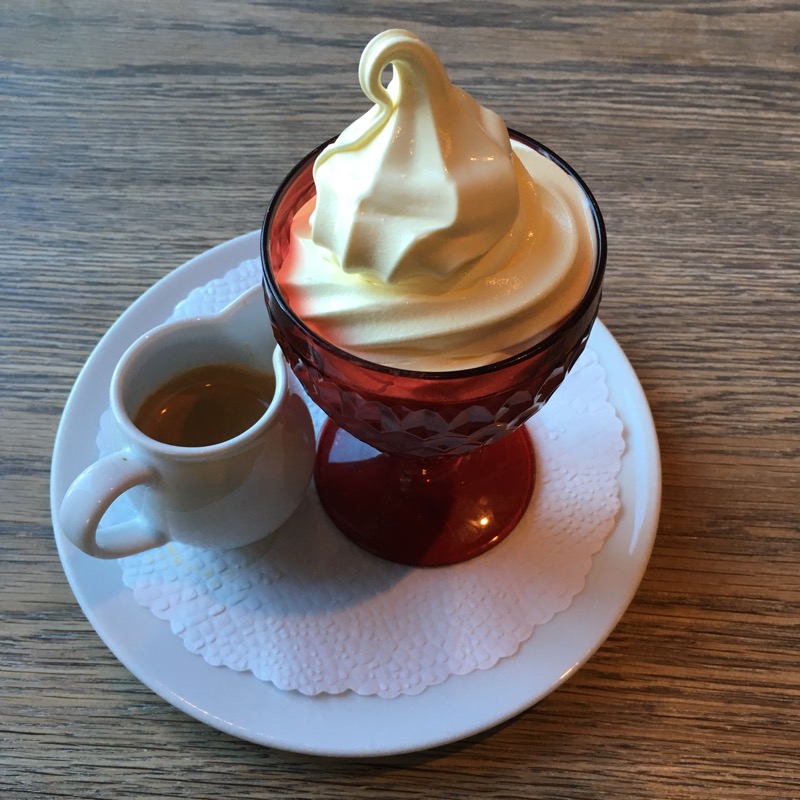 On the mountain slopes, Salastrains has sustained the great food seeking crowds for decades. Their truffle pizza is Roman-style (tomato base on thin, soft, olive oil added, chewy crust) and satisfying. More young crowd, less expensive, and most dishes are hearty, mountain fare.

Inside the authentically renovated boutique hotel Chesa Rosatsch in Celerina (about seven minutes drive from St Moritz) for lunch after an intense cross-country run we like the Uondas grill where superb Alsatian tarte flambé are baked to an ultra-thin crispness under the créme frâiche with local dried venison, fresh Swiss cheese and other superb toppings. They dry age “madürà” calf, beef and lamb in their maturity cabinet that is then grilled to perfect. On sunny days, their house-made vanilla swirl ice cream with coffee is my indulgent après-ski replenisher. The food here is much better than at the more famous Chesa Veglia grill owned by the Badrutt’s Palace Hotel (the pizza restaurant there is very good though). Most restaurants now have vegan options or even a special plant-based menu. Uondas includes a few vegivore bowls on its evolving menu. 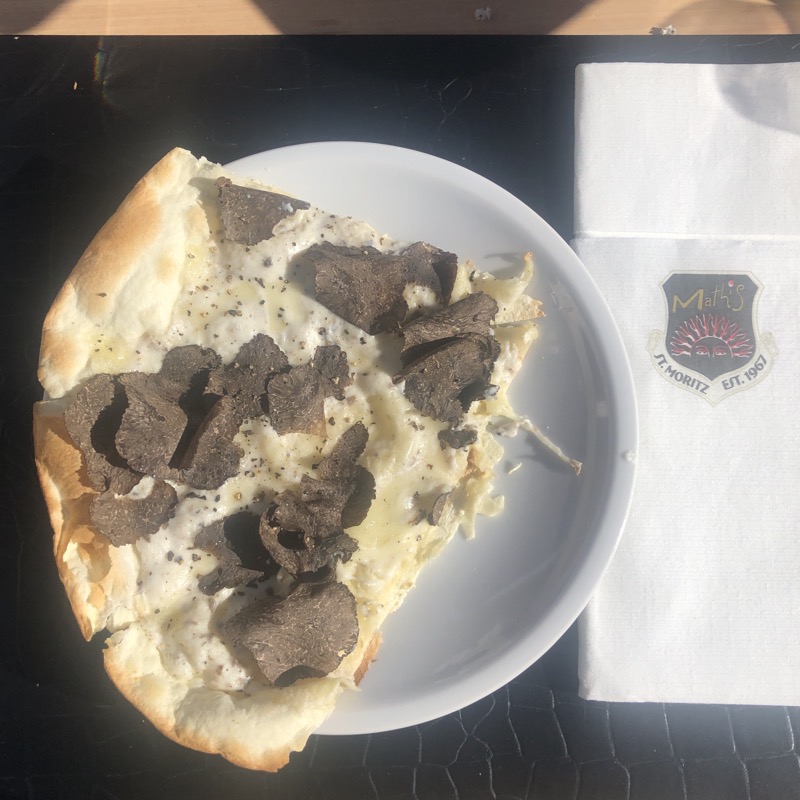 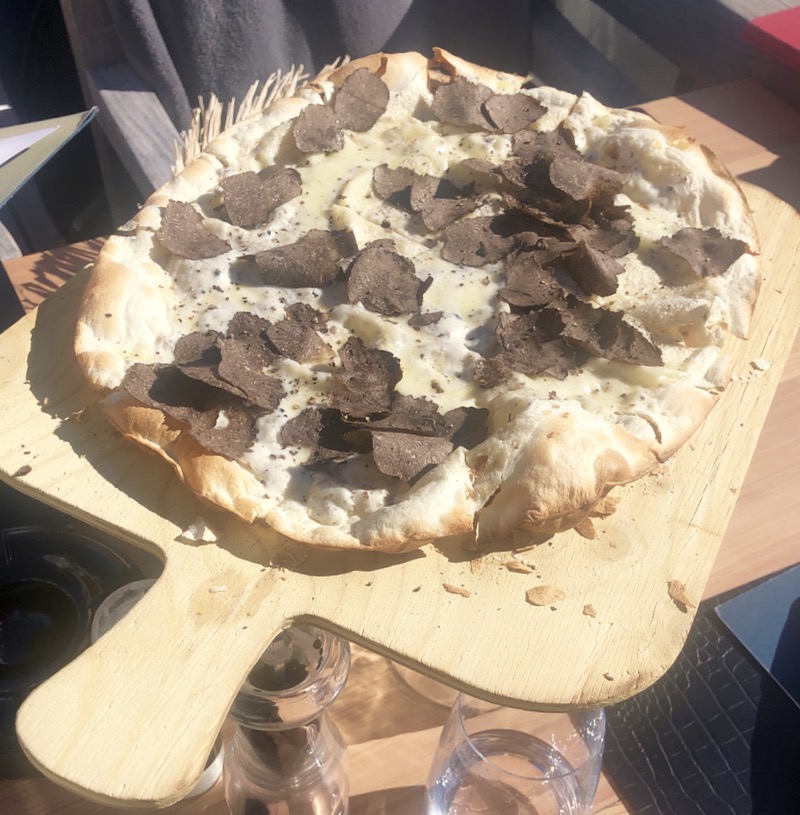 Eat fancy on the slopes

Literally next house to Salastrains, after 50 years of family restaurant business at La Marmite, the local star chef and co-founder of the annual St Moritz Gourmet Festival, Reto Mathis moved to a new location with an open terrace in 2017. Named CheCha by Reto Mathis, the caviar and truffle king (the ultra fine thin-crust pizza OMG!) rolls your eyes scanning the “Eggs & Balls” menu (Reto Mathis Private Selection beluga for 4200 Swiss Francs!!) also offers “VEKAPU”, a daily changing vegan basket of specialities. In March 2018 Switzerland introduced one of the world’s strictest laws that prohibits any infliction of unnecessary pain to animals. Lobsters cannot be cooked alive, but must be stunned before. Eating living and moving shrimps as in Japan would be a criminal offence in the otherwise quite liberal and neutral country. The crustaceans in the aquarium at CheCha wait to be pampered prior to entering your plate. Scientifically sound, the new rule acknowledges the highly evolved nervous system of the lobster. Non-skiers and indulgent lunch drinkers (English sparking Nyetimber gets a special, full page attention) can get there or back on a horse-driven carriage. The Culinary School here tempts home chefs to visit St Moritz in summer. 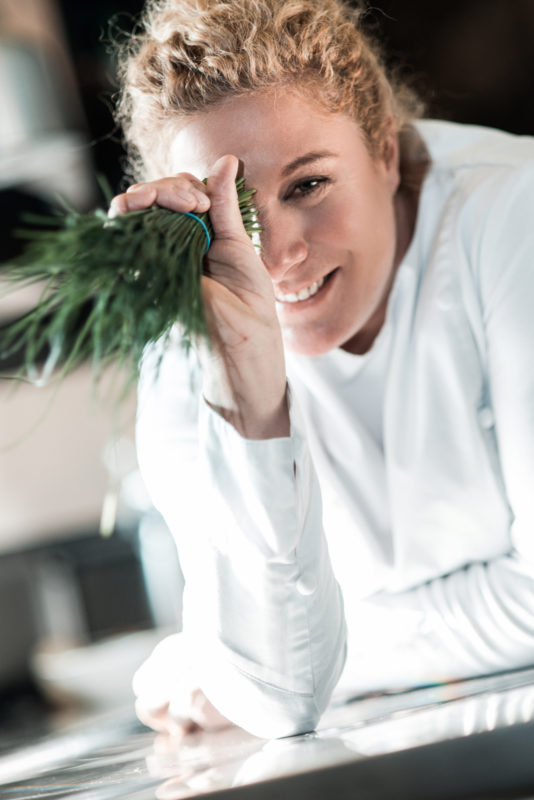 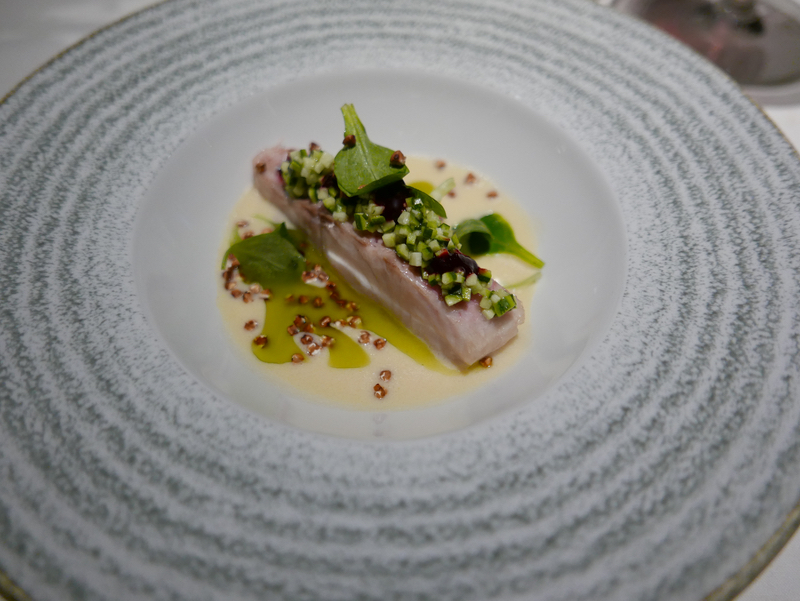 The Gourmet Festival is scheduled annually around the Snow Polo on the Lake, late in January or early February. From our three years of participating, fancy ingredients still rule as the chefs seem to be concerned with not satisfying their fine clientele, nobody, yet, serves plant-based cuisine or humble produce that has been increasingly highlighted by sustainably-minded chefs globally. A growing influx of female chefs have recently accepted the invitations to cook in the sunny mountain valley. Dominique Crenn as well as the Slovenian Ana Roš paid a visit last year, Brazil’s Bel Coelho, Bee Satongun from Asia and others opened up our cultural taste buds beyond the Swiss borders . 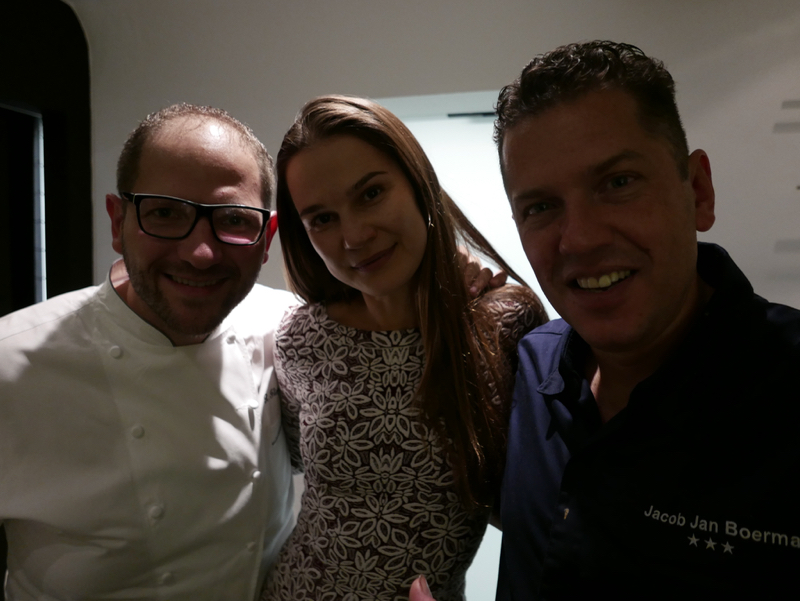 Thematically, you encounter purely female chefs as in the 2020 edition, or just a melting pot of established and rising stars in the global culinary world. Usually, at least one Thai chef participates (we were thrilled with Ian Kittichai and Bee Satogun of Paste Bangkok, Laos and soon a new opening in Australia). We always discover at least one chef, whose restaurant we would otherwise missed (the three Michelin starred Jacob Jan Boerma, whose superbly balanced cuisine we loved, closed De Lest in 2019, now opening a more casual concept in Amsterdam), while Lola in Copenhagen inspired our return to the Danish capital for her by Bolivia-tinted, yet locally-driven cuisine. Saving ourselves unnecessary gourmet trips to those restaurants, whose chef’s performance underwhelmed (Ana Roš of Hiša Franko disappointed with her flat, quite boring execution). The festival dinners are spread beyond St Moritz between the local hotels, which is an opportunity to disembark from your regular haunts. This year over 4000 diners forked through the fine cuisine served during that indulgent week in St Moritz. 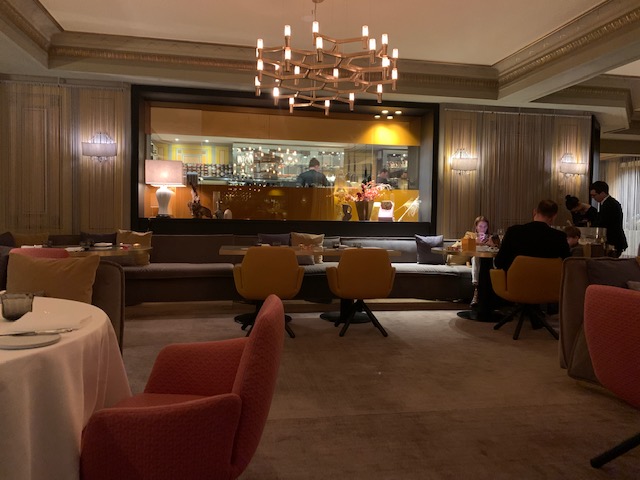 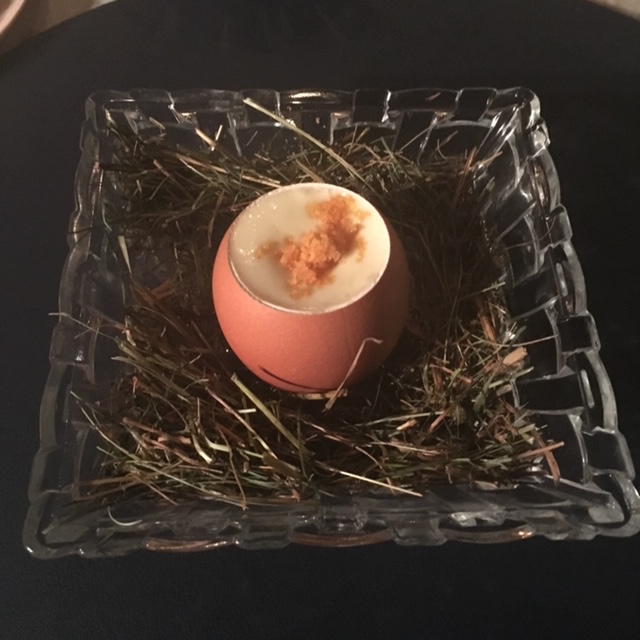 While some St Moritz restaurants have been offering reliable although not cheap delicacies for decades, almost every year a newcomer stirs the local dining scene beyonds its limits. The Badrutt’s Palace hotel leads the fun and fine dining evolution here. Recently, IGNIV overseen by the three Michelin starred Swiss chef Andreas Caminada upped the dining game at the Badrutt’s Palace. Small plates like luxurious tapas, each fine-tuned, tempting, fun, to be shared in endless servings inside the sexy and intimate ambiance. We loved it each season so far. Once a year, usually in February, the chef Caminada himself shares the kitchen with his IGNIV branch chefs in a spectacular evening of hedonistic pleasure. The head sommelier pairs the best Swiss wines with the intriguing fare, indeed a family party, as they call the night.

Jason Atherton at the Badrutt’s Palace Hotel launched his contemporary fun British culinary offensive in the last winter season. Set in the club downstairs, many of the Asia meets Europe creations are finished at the table as the Dj spins his favourite tunes. The chef himself was present when we came and later he rocked it out on the dance floor with his wife and young kids. An ideal combo of entertainment and truly delicious food.

Nobu Matsuhisa has a seasonal (winter) restaurant at the same hotel, but the execution is inconsistent while the prices peak high. By far, this is the weakest from all his nikkei restaurants we have been to anywhere in the world. 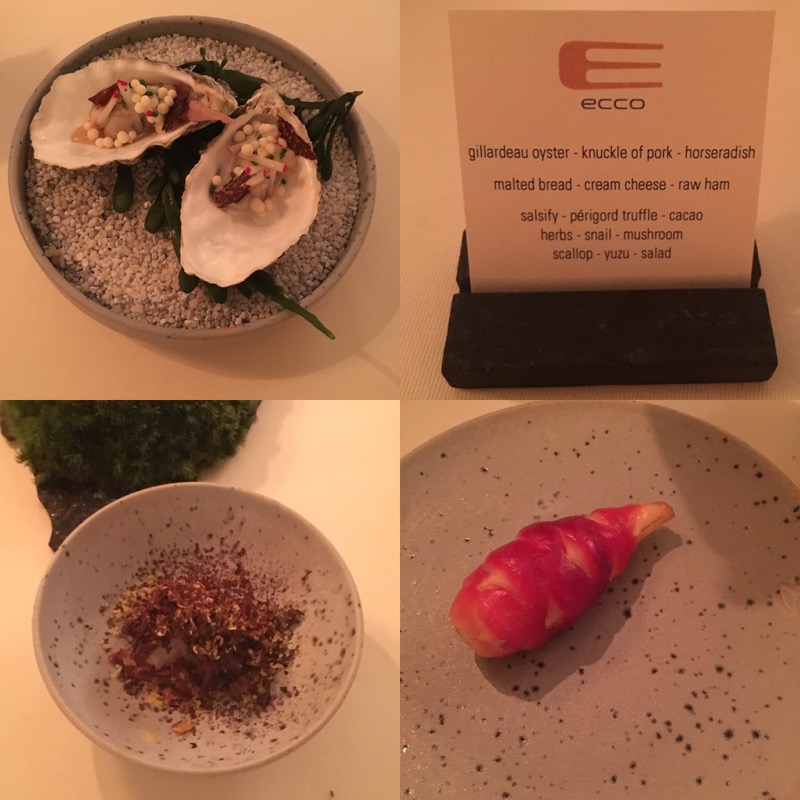 Beyond the centre of St Moritz, creative gastronomy is served also at the two Michelin star Ecco on Snow at Giardino Mountain Hotel in Champfér.

There also a splendidly restored farmhouse (built in 1658) was transformed into an excellent Michelin restaurant Talvo by Dalsass. In the caring hands of Tyrolean chef Martin Dalsass and his son Andrea, you are for consistent, ingredient-driven, frequently updated pleasure. Olive oil lovers rejoyce as the chef pairs different Italian ones with the dishes and the lavish bread basket with the couvert of tomatoes and giant green olives. 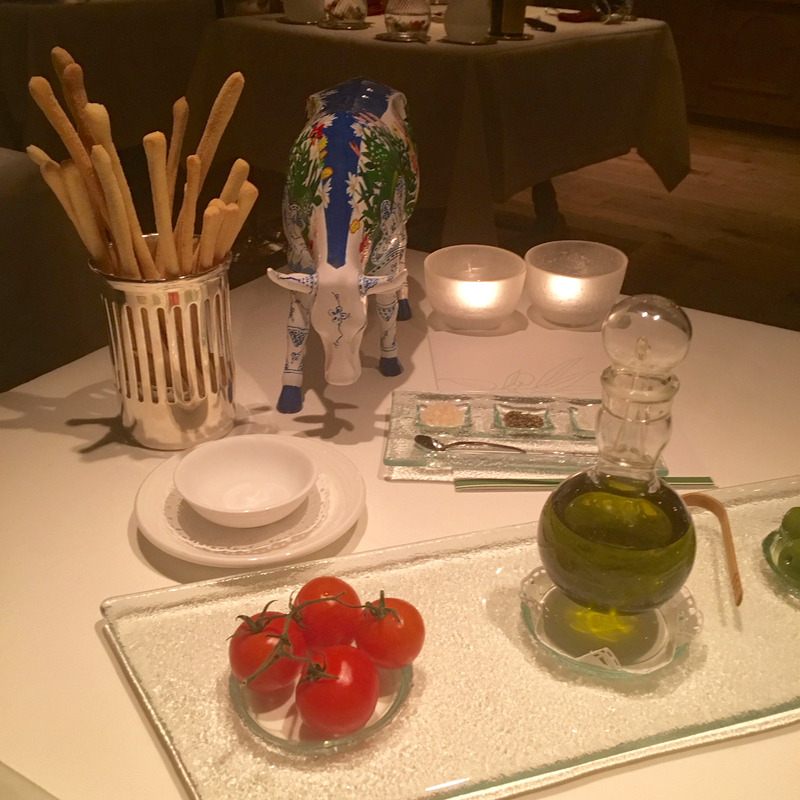 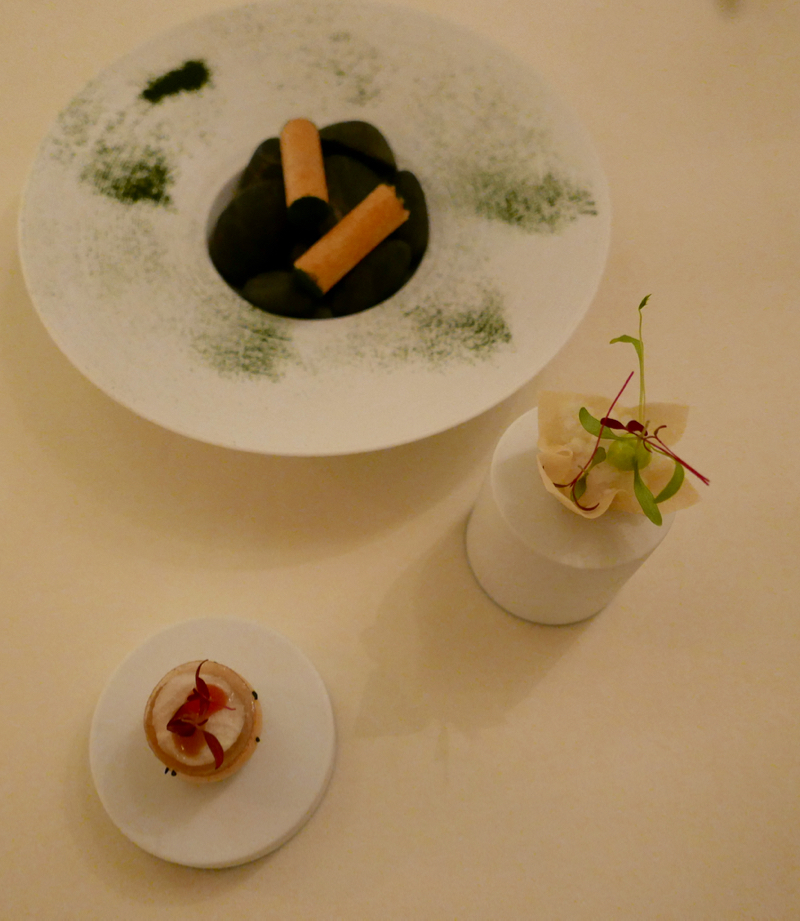 The Italian concierges chitchat guests into another two Michelin-starred Italian Da Vittorio at the Carlton hotel, but a disappointing meal and flimsy service during our meal a few years ago will not attract us back anytime soon. The chef cooked his ingredients without much respect, yielding taste to his ego’s originality. 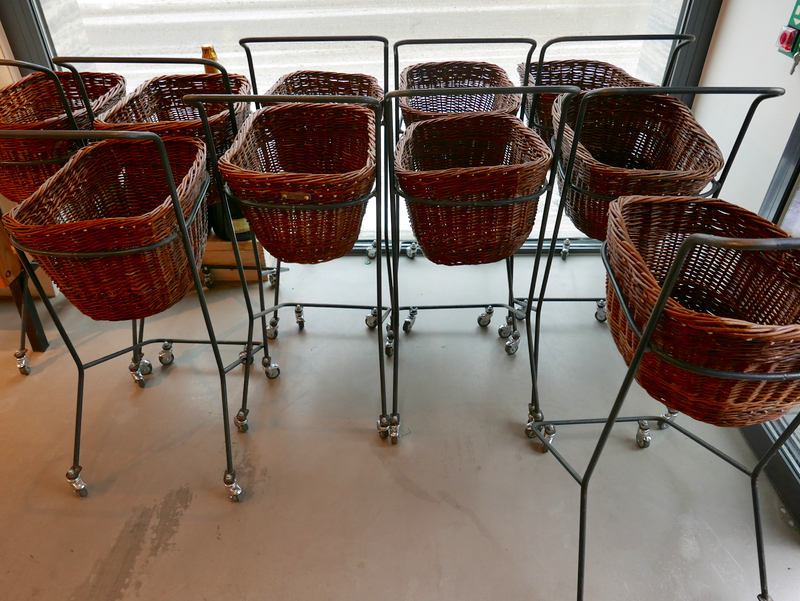 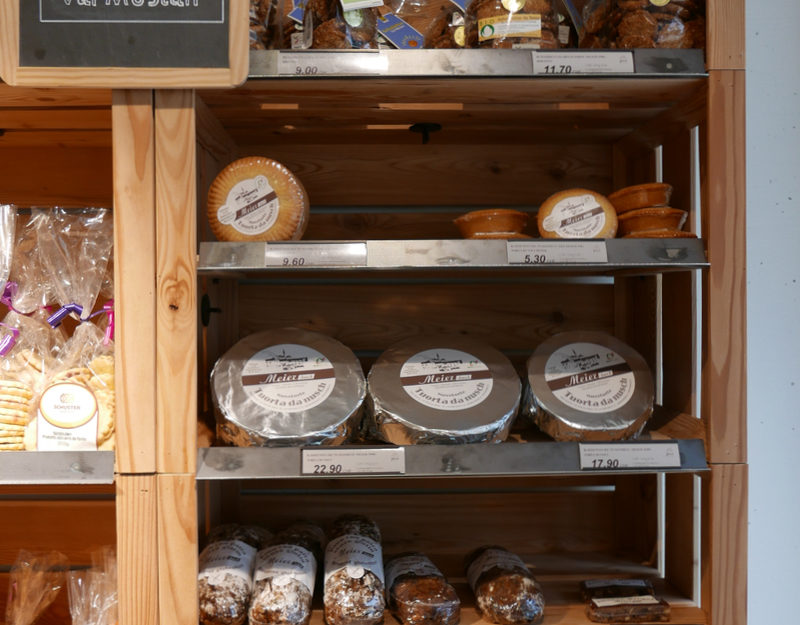 Mountain delicacies at your hand

Beyond fondue and raclette at the stüvas buy the local Engadine honey-laced walnut tart nusstorte, capuns or salzis (sausage). At Pur Alps, a gourmet store embracing local produce, much of the bounty is organic or “Demeter” (biodynamic) certified and sourced directly.

For Swiss chocolate head to the Läderach boutique in the town’s centre. My favourite slabs include the crunchy hazelnut dark chocolate, while the Grand Cru box allows for a more sophisticated cocoa bliss. Your hotel may feed you with indulgent chocolate domes on your way from the ski slopes (Badrutt’s sweet transport), or exclusive milk chocolate bars in a minibar (Suvretta House). 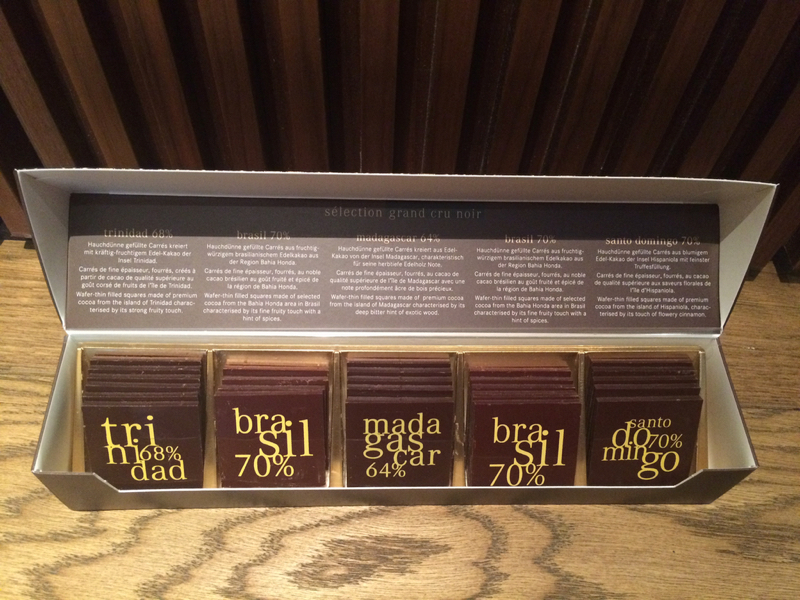 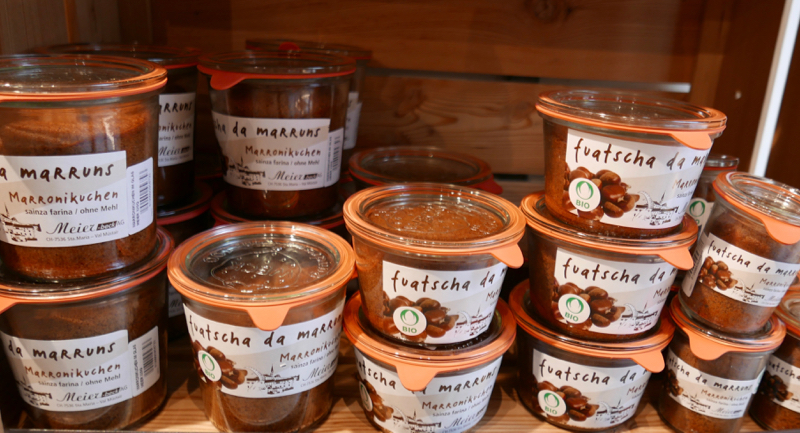 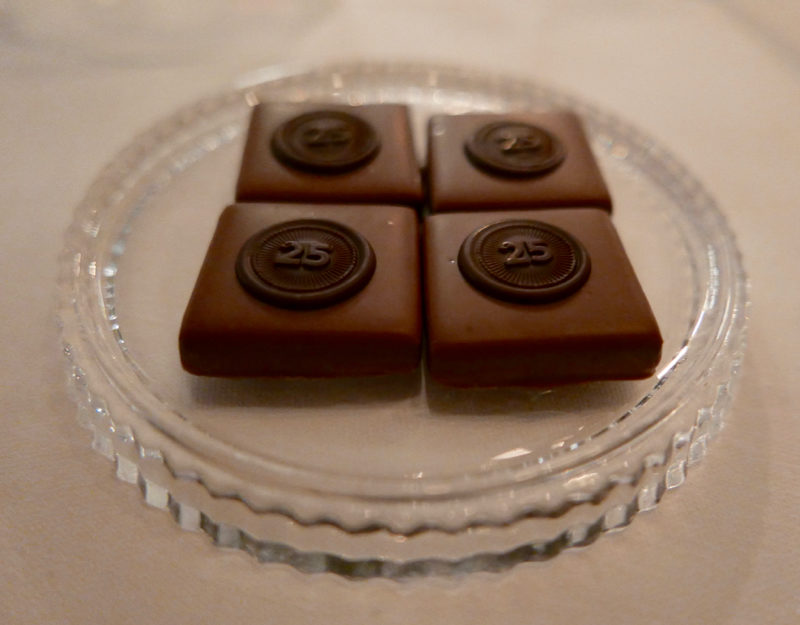 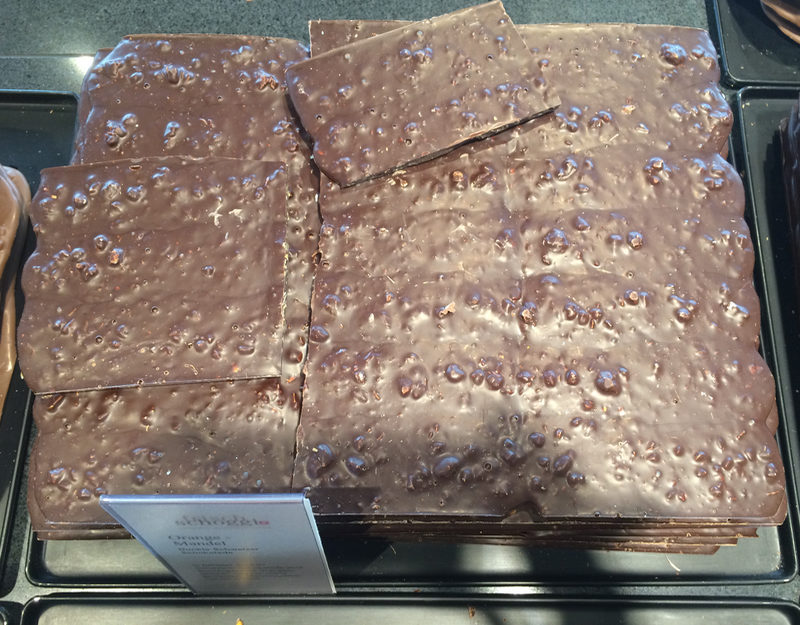 The English influence on the ski town is still rampant. An afternoon tea at any of the Grand Hotels was introduced to pamper the English guests over a century ago. Today, Russian Insta-stars (Kulm and Badrutt’s Palace), and other aspiring ladies with their entourage fill the glamorous chandelier rooms to display the opulent lobbies of the Badrutt’s Palace, Carlton, Kempinski Grand Hotel des Bains and the Kulm hotels. The most classy crowd gathers at the Suvretta House, where a live piano chimes to the Western tea ritual as a chef prepares warm waffles a la minute. 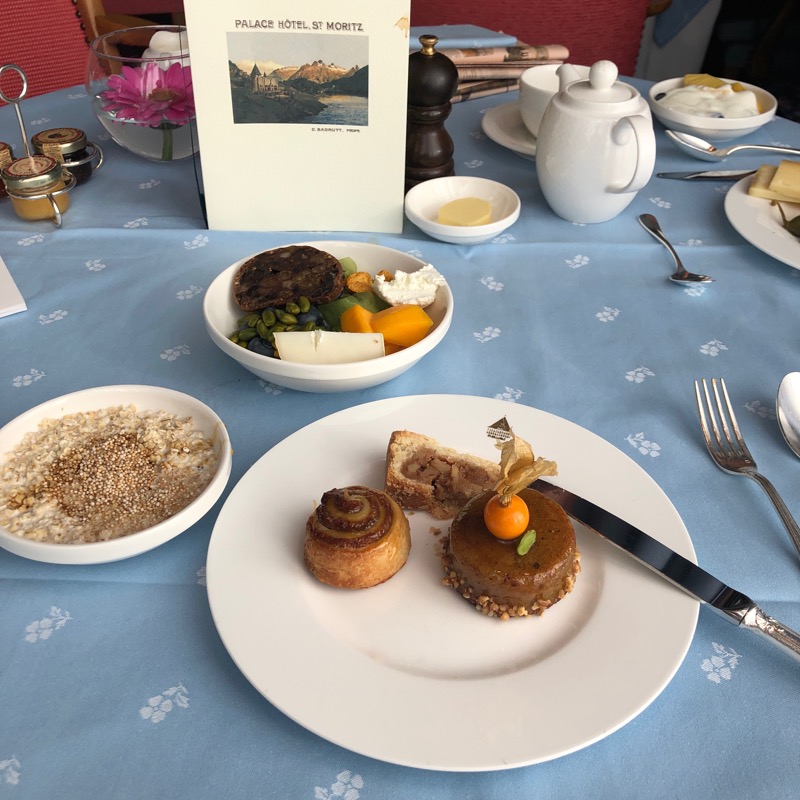 From the early hours before any activity sets you out through the warming afternoon indulgence and socialising at night, St Moritz will not disappoint you as a gourmand mountain paradise, choices abound!