Lee Ufan nudges you to see what you normally do not see. As in meditation, his work is not about ideas but rather transcendence of the self. The philosophical artworks express a momentous, site-specific relationship between the observer and the reality. Although he created sculptural interactions in the Kensington Gardens, in Versailles or at the Guggenheim in New York, nowhere his works resonate in evolving their wholeness as at the Lee Ufan Museum on the Naoshima island in Japan. 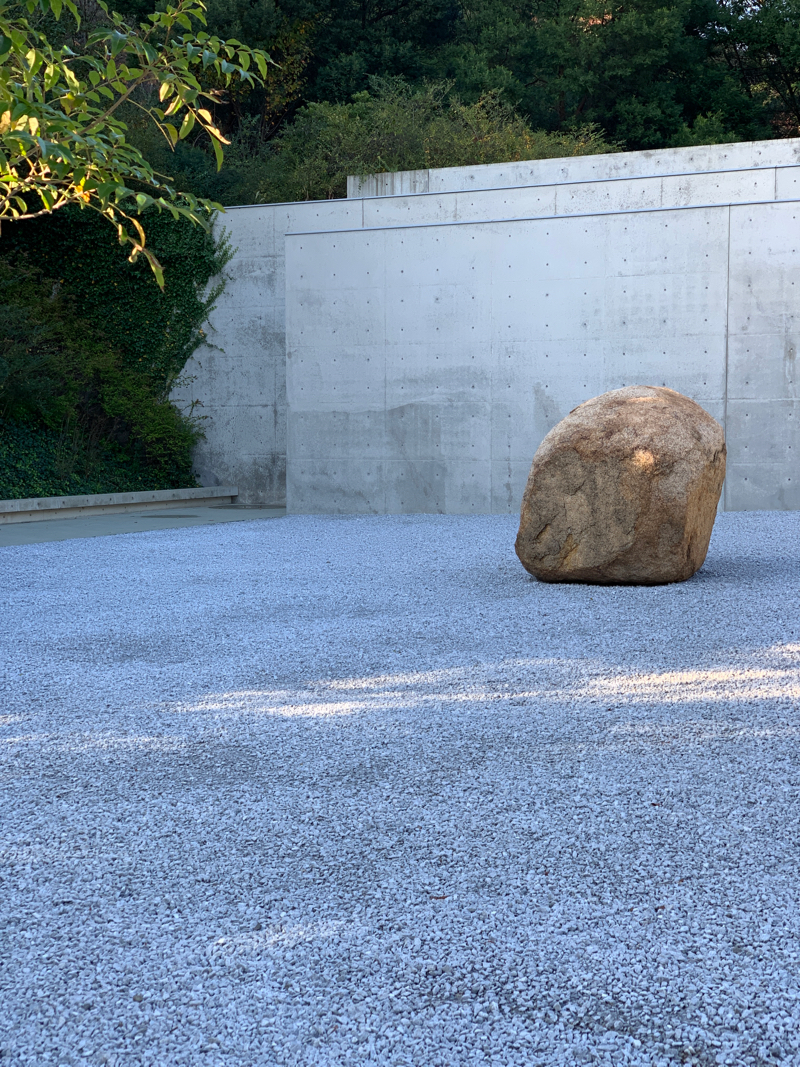 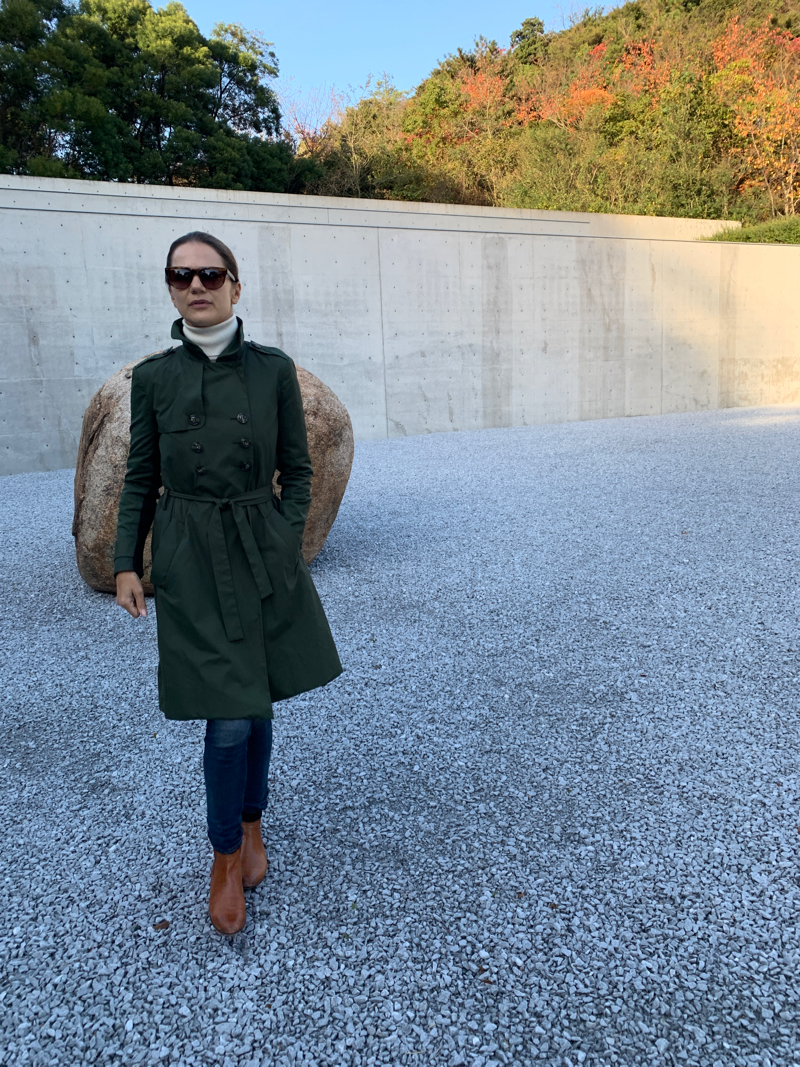 The Art of Encounter in light and space — as much as in anything when art serves as the intermediary connecting the observer with the outside world — is the focus of Mr Lee. The artist may suggest, as he did at his personal museum, yet it is up to the viewer (my photo above) how she engages with and interprets the artwork. At the specific point of the day I saw more connection with nature of the Relatum sculpture with the sunlight and the tree, while the artists work included a broader scope of vision including giant concrete and steel poles.

Lee Ufan shared his hope that “artistic expression will lead to reflection and leaps of imagination” by creating “painting and sculpture that transcends the age of deconstruction and reinterpretation“. Around the world, his artistic discourse mediating the experience between an idea and reality, has engaged not only the visitors of leading galleries and contemporary museums, but also the passersby in London’s Kensington Gardens, where his rendering of another Relatum sculpture stopped your gaze fronting the Serpentine Gallery.

Perhaps for the artists’s accent on engagement and sensations of the viewer, the exhibition at his Naoshima museum concludes with a meditation room – a space with a white front wall painted with unframed “Dialogue” to expand the visitors’ experience through reflection and recollection of what they encountered in the artworks.

At Naoshima, Lee Ufan Museum opened in 2010 to display more permanently the site-specific accent that the artist is keen to mediate. It is a unique experience felt distinctly with the changing seasons, so I recommend to any sensitive being to come and feel it on his/her own.

Architected, like the Chichu Art Museum and the Benesse House nearby, by his friend, the minimalist with a naturist eye Tadao Ando. The octogenarian is a leading creative figure transcending his native Japan into France (Museum at Château La Coste) and other countries. In fact, it was Mr Ando who brought Lee Ufan to Naoshima in 2007, suggesting the exact site of Kuraura for his first museum.

A painter, poet, sculptor but also a philosopher (graduated from Nihon University, Tokyo), his ideas and cultivated skills set Lee Ufan apart from most of the 20th century artists. Now in his 80s (born in 1936), he is pursuing his legacy not only through his teaching, but also in holistic spaces dedicated to his work as he intended it. His traditional, Confucian education, including calligraphy, he received in when growing up in Korea, then occupied by Japan, has formed his spiritual approach to art.

Lee Ufan Museum on Naoshima takes you on a sensory journey. You are not supposed to take photos, but in order for this experience to last in my failing memory I had to snatch a few snaps when nobody was looking. I am sorry, dear artist, but as a creative person yourself you must understand the fleeting nature of inspiration, and the works by Lee Ufan are one of those special things I connect with personally, so I need to see them through my lens, not in exhibition books and leaflets.

The Art of Encounter, a wonderful book about the artist’s fascinating philosophy, was published in collaboration with the curator Hans Ulrich Obrist of the Serpentine Gallery.

Displaying his prowess in light and space – the angle you take when engaging with his art such as in this image I captured first with the sunlight allowed into my frame, and seconds after with a lowered vision – changes the mood of his work. This was a few seconds moment in one’s life, but seen differently. As with an attitude, you can choose what you want to see. Relatum are series of spacial works spurred by Japan’s Mono-ha (‘School of Things’) movement, he was part of. The natural space relates with the material he uses creating a sensation of openness. 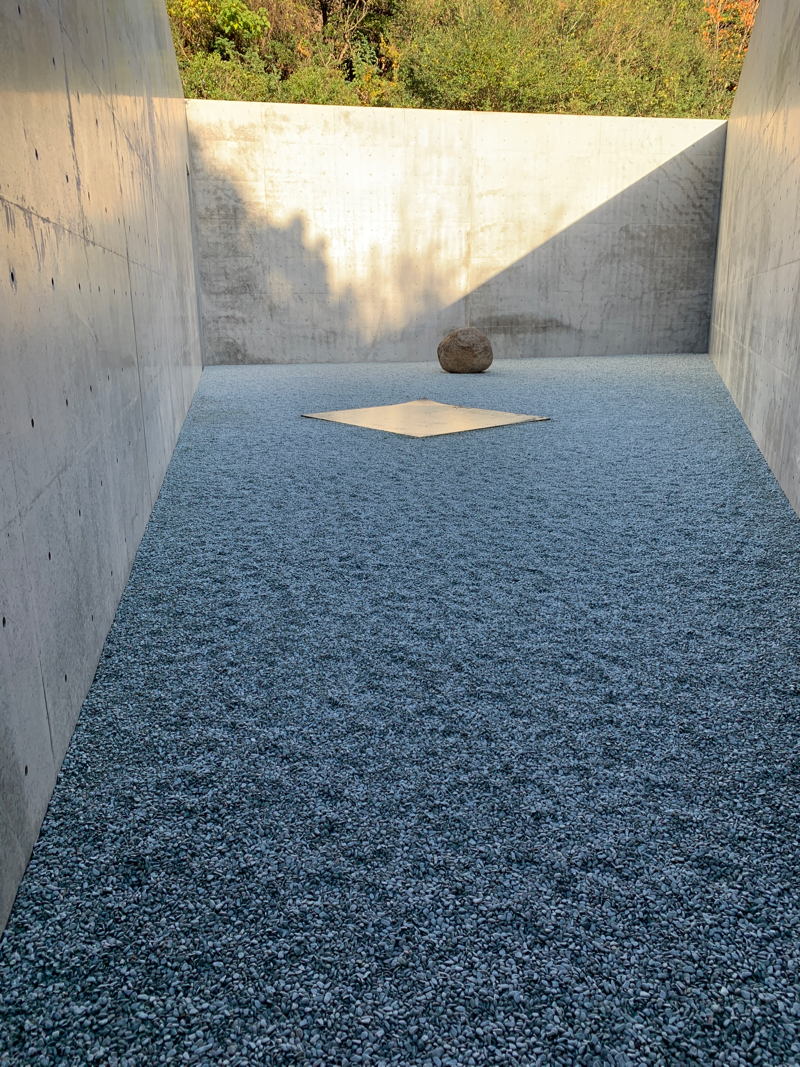 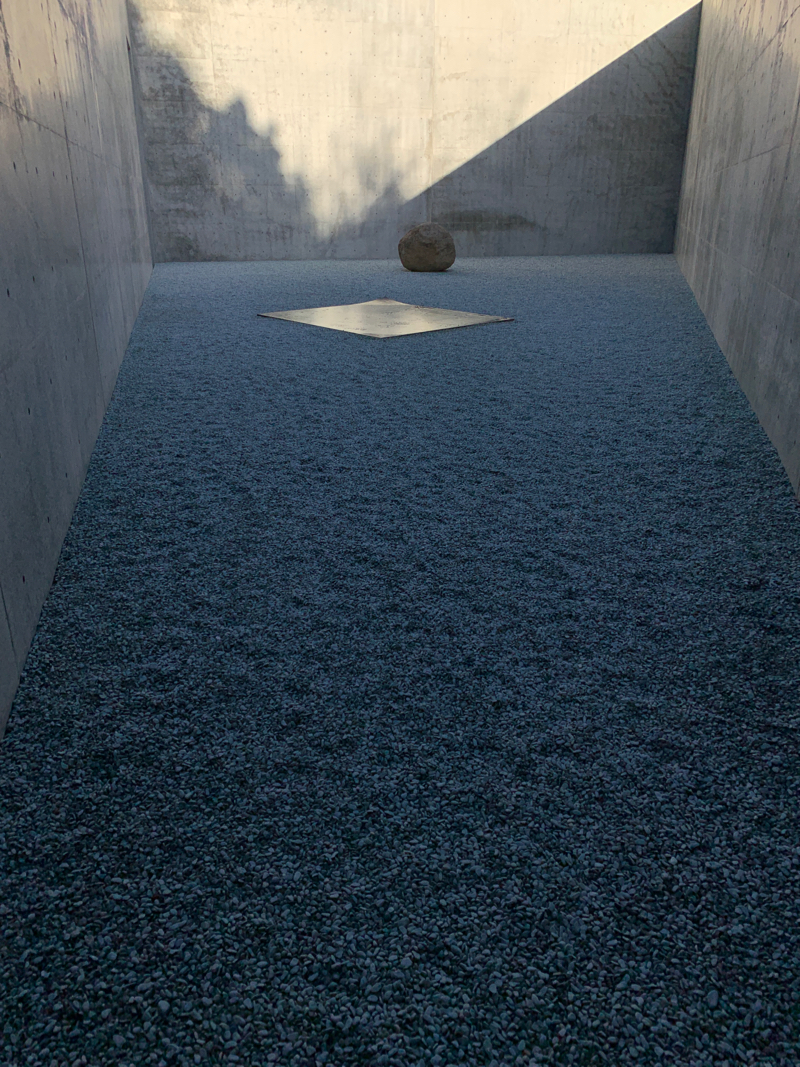 Titles as a small hint, service to the viewer

The time of the day also halos the here and now between you and the reality in front of you. I cannot more agree with Mr Lee’s about his outdoor works: “The landscape seems to be always changing. You can expect various experiences in relation to nature”. These photos of the sculpture (below) that was originally conceived at Versailles, titled “Porte vers l’infini”, taken only an hour apart, absolutely changed my perception of each moment. The first at 15:20 upon my arrival at Naoshima, contains more human noise and feels so sharp, while before the early sunset of late November at 16:30 the warmth of the moment embraces you with its natural calm.

The artist confessed in the Serpentine exhibition related book The Art of Encounter: “I often feel burdened about titling my works because a title tends to restrain the viewer’s interpretation of the artwork… There is a distance between the title and the actual work and the title is static while the artwork is a living thing that can be viewed differently anytime. So the title is perceived as a freeze-frame.” So as you walk through this rainbow gate, you glimpse the instance of infinity and its expansiveness. Whether facing the sea or passing back seeing the mountains, the sky unites all into an expanse of space. Infinity fascinates the artist, and he wants to open the source of your own imagination. 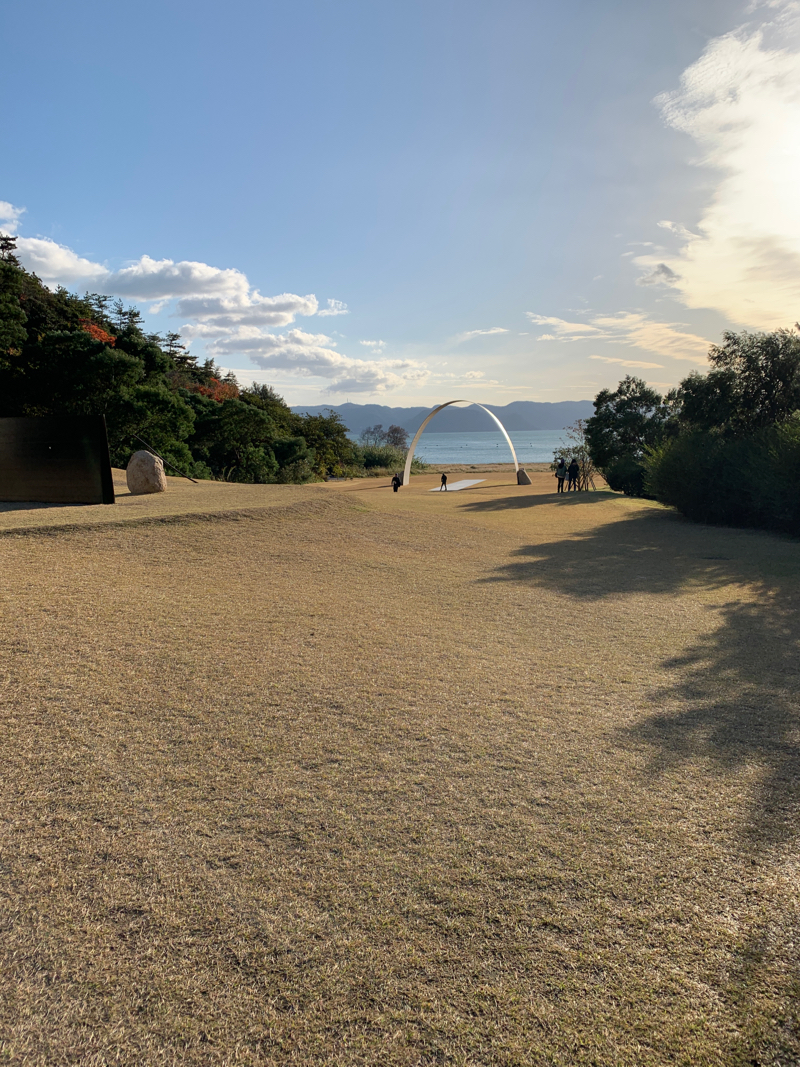 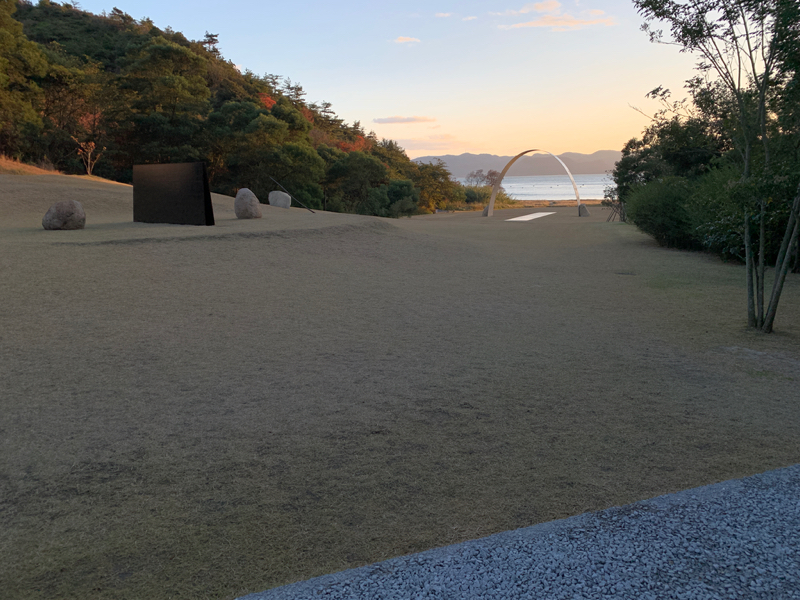 A dialogue, relationship and openness

His sculptures (3-D) open our awareness of space, while his paintings (2-D) interact with time. Starting with the Pole Place in front of the museum, moving to the Correspondence Place after the ticket office, exploring the Encounter Room, Void, Silence Room, Shadow Room, and ending in the Meditation Room, you are in for powerful and engaging experiences.

Inside the Lee Ufan Museum, the From Line, From Point, With Winds paintings express the magic of minimalism. In his hands, little says more than complex, purposefully visual reality reinterpreting paintings. In an interview published in The Art of Encounter he asserts: “In general, flatness of a painting represents individuality and ideality; the cubic quality of a sculpture represents generality and reality… For this, I attempt to mix 2-D and 3-D in my own way so the action of seeing can be considered as more multi-layered and dynamic.” This is why you need to see Lee Ufan’s works in their context like in the Encounter Room, not as inserts between other, unrelated works in packed museums. Unless, you witness the pure interaction between his sculpture set in nature. Then you can glimpse into the openness of the universe that he carefully unlocks for you. Clarity through the viewers’s experience is his goal. 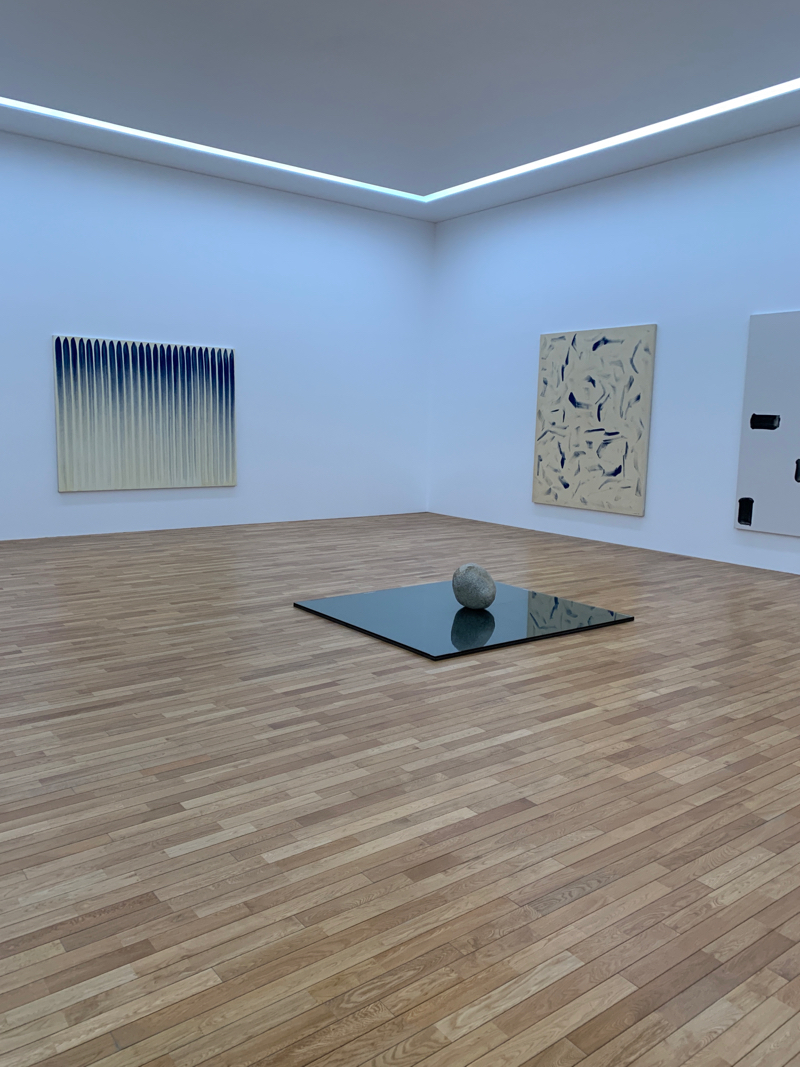 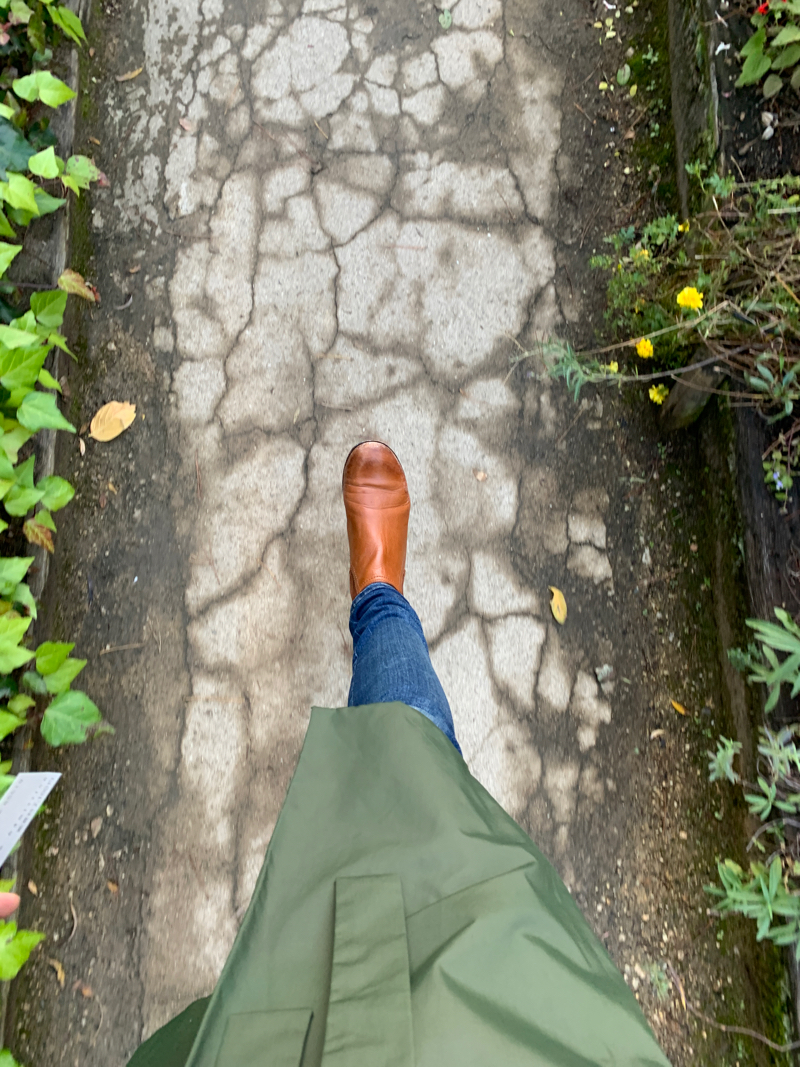 “The artwork is not the same depending on how and where it is displayed“, Lee Ufan grasps the subtle energy of context that is particularly felt in his artworks embracing yohaku, emptiness or resonant space. Since his path to art is about the imagination and outer reality, not attempt for reproduction, he finds it important “to limit the parts of the work I make, accept the parts I do not make, and create a dynamic relationship in which these aspects both interpenetrate or repel each other.” Personally, I was immersed in his works, but could not explain what it was. As in my poetry, the sensation cannot be intellectualised, but when one’s awareness is opened, it can be felt. With me, the artist achieved what he hopes for: “the opening up of a poetic, critical, and transcendent space“, but for that a high level spirituality is required.

Ri Ūfan Bijutsukan was born in South Korea, but for most of his life created in Japan and later he partially moved to Paris. “At the intersection of three cultures, Lee Ufan’s work is universal and immediate in intent. Immediate in the sense that language is not a requirement: Ufan often describes how he made his first works while planning to study literature and philosophy in Japan, but failed to master the language. He opted for visual communication instead,” wrote Jean-Marie Gallais, the curator of the recent 2019 exhibition Inhabiting Time at the Centre Pompidou-Metz. Many sculptures found around Naoshima today are site-specific, engaging with the space they were installed on. Over a quarter century ago, The Benesse Art Foundation pioneered what is more common in today’s art world – showing works as unique intersections with reality at a specific location.

After Japan, Space Lee Ufan at Busan Museum of Art opened in 2015, and a new Fondation Lee Ufan Arles, currently scheduled to open in 2022 in the 17th century Hôtel Vernon, is being redesigned by [who else than] his Japanese architect friend Tadao Ando. “This Roman city, rich in history, was a catalyst for new ideas and thinking. I was inspired by the [potential for] dialogue between my work and the city’s fragmented ruins”, he writes on his foundation website. Arles has been reinventing itself as the new blood for artistic expression in the South of France. Far from the spoiled glitz of the Riviera and St Tropez and the commercial distraction of the major art selling cities (New York, London, Paris, LA, Tokyo, Beijing). I love visiting Arles beyond its summer photographic show, when the heat blurs my vision and clouds my mind. Next to the contemporary Luma museum, the Lee Ufan Foundation will draw more spirit-seekers into this beautiful Provençal relic.