I interviewed Shinichiro Ogata, Japanese designer, creative director and founder of SIMPLICITY and SABOE tea experience on the theme of Japanese contemporary culture & tea’s place in it. 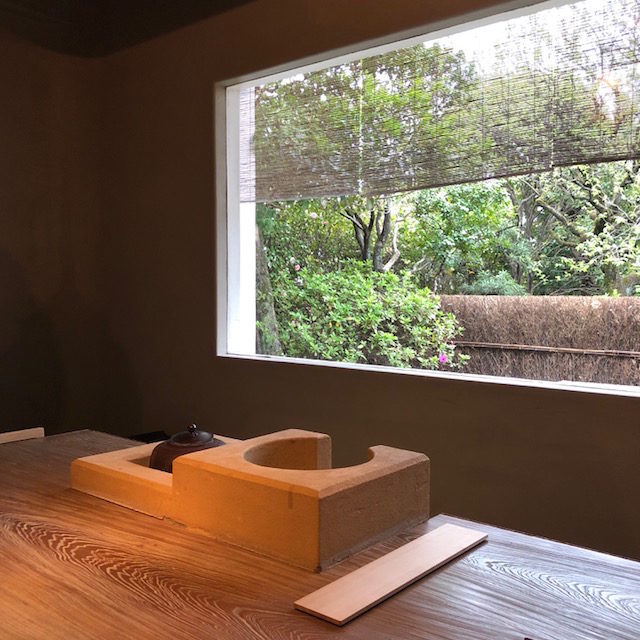 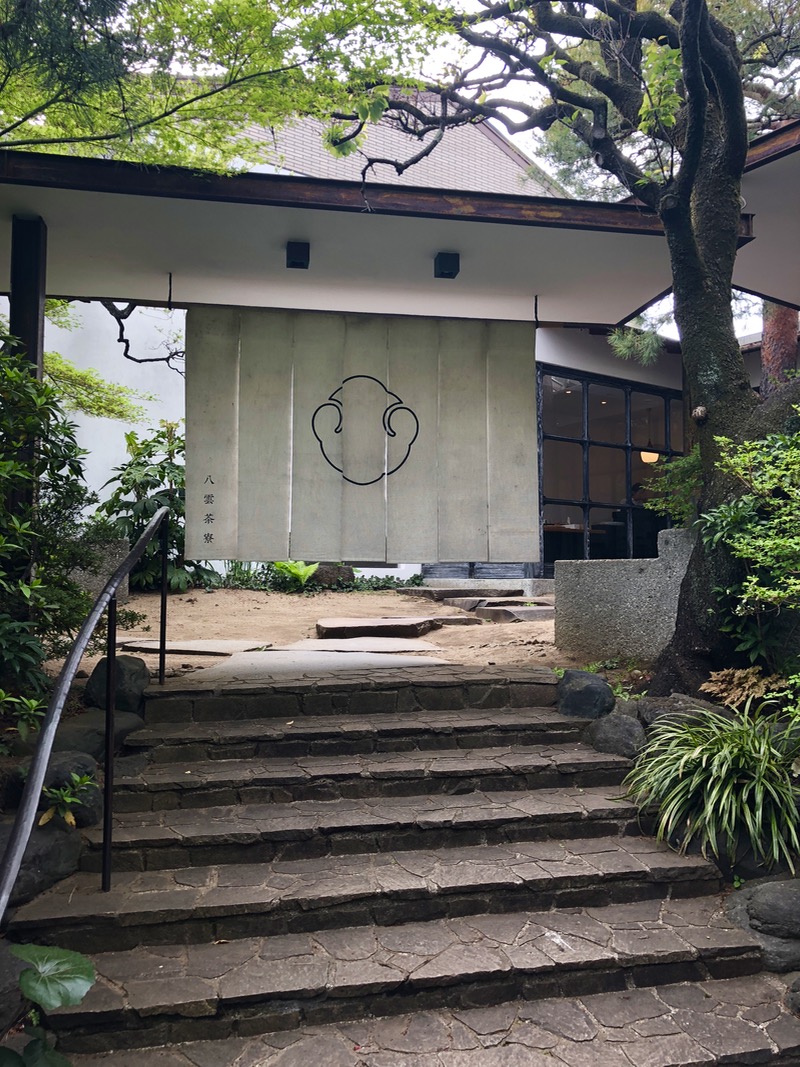 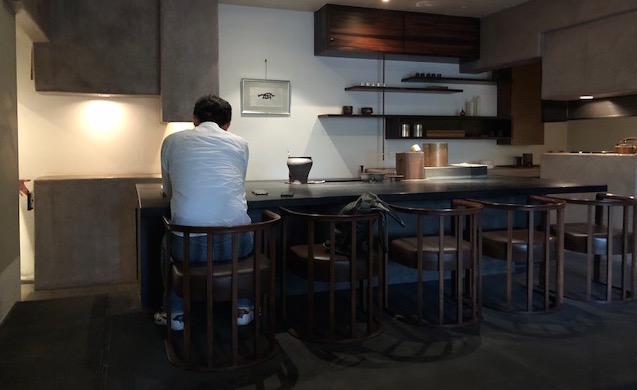 Shinichiro Ogata, the award-winning Japanese designer, creative director and founder of SIMPLICITY seeks harmony in the form of the contemporary Japanese tea culture. The gentle curves and subtle yet uniquely balanced shapes of his dining, sake and tea ware and the smooth – as if raw – natural tints reflect the Shinto essence of coexistence with nature, “because the Japanese find God in nature, I think that the mystery of nature is always fundamental to what a human being has no matter what your religion is. Respect for nature and mystery is the most important thing when I create.” Japanese Wabi-sabi aesthetic’s rawness that over time burgeons into the rusting patina of beauty underpins the age-ability of most of the material creations by Ogata-san. 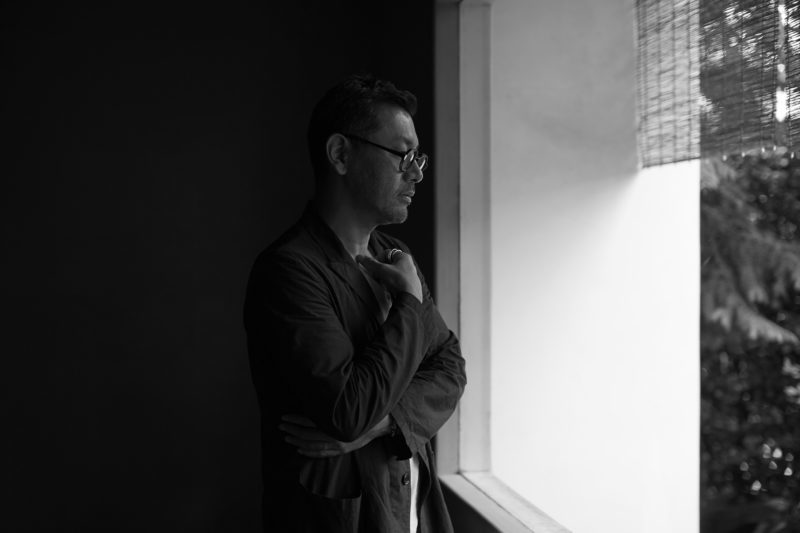 Visiting Japan unleashed my love of tea appreciation that in Tokyo landed me sequentially at every single opening of his prolific interior design projects. Lost in translation in the hiving metropolis, suddenly I found myself at home. Tea and simplicity echo my spirit. Each trip yielded at least one of the covetable objects from his product line S[es] or his paper-ware WASARA, all visually moulded into contemporary shapes in natural palette of shades. After almost a decade of appreciation, I learned that for him: ”To drink tea is to take power of nature into your body. Through the conduct of making tea, I believe there will be connection between nature and mankind, people to people and there will be harmony between the mind and body.” 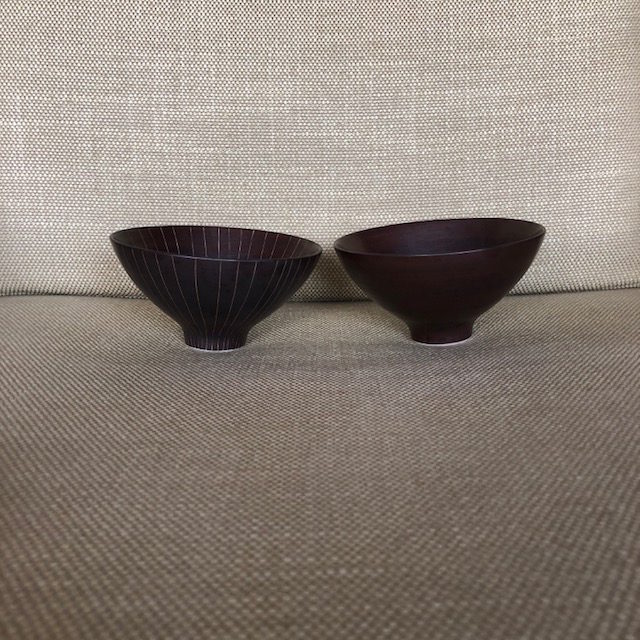 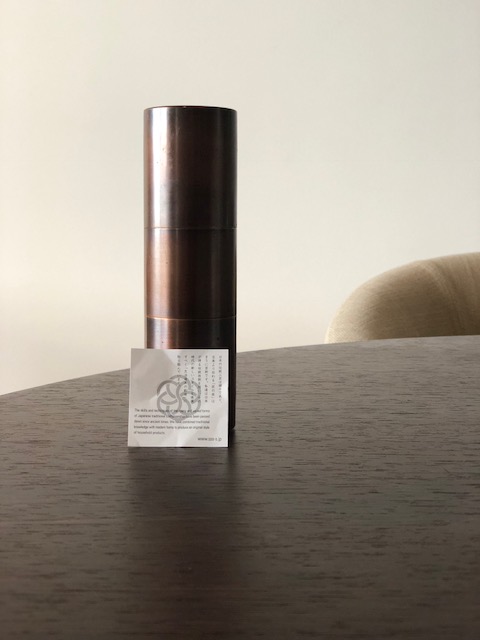 Via his new concept Saboe, a tea salon gathering “interweaving yin and yang” in its space, he will for the first time share his modernly informed talent and the traditional Japanese know-how of his associates around the globe. Nurturing the soul visually, sensually, but above all as he puts the purpose out: “Our aim is spreading the Saboe style to contribute to the world so that tea producer and artisan who makes tea products will be able to inherit the techniques, and handing it over to the next generation to keep the tea culture for hundreds of years to come.” 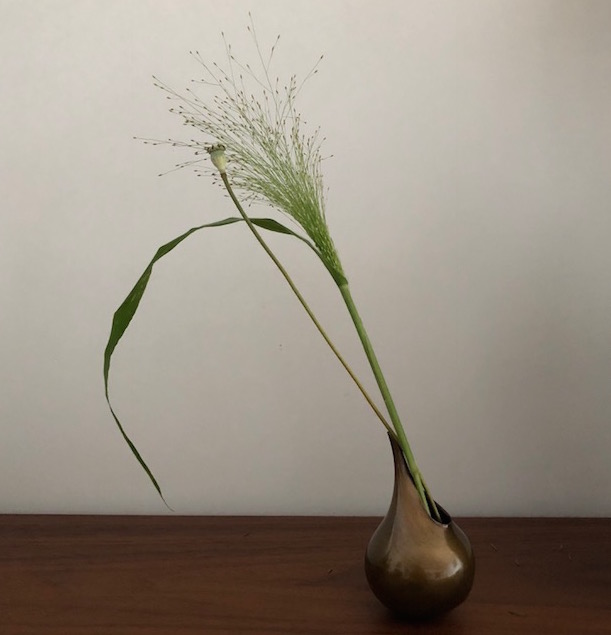 My ikebana arranged in the ‘drop’ saucer by Shinichiro Ogata

It helps to get a bit of the background of the tea culture in Japan, in order to grasp how important is the work of Shinichiro Ogata and his team.

What Sen no Rikyu had done for Japanese tea appreciation over five centuries ago stands on a red alert for rejuvenation. The rebirth of the popularity for traditional Japanese tea is not an easy quest since the global coffee trends are spilling over to Asia capturing the youth. In this changing climate Mr Ogata maintains: “I am connecting the past and the future as well as artisan and user and my mission is to utilize Japanese traditional technique fit into modern lifestyle and also link it to the future.“ In the second millennium drunken by globalisation, elsewhere, traditions wither within nanoseconds. Gretchen Mittwer sadly observed in his book What Is Chanoyu?: “As far as Japanese traditional culture is concerned, modern Japanese people may easily be strangers to it, much like non-Japanese”. More, the beverages popular in Japan today often misuse the natural product. The matcha lattes are heated to high temperatures so the healthful nutrients of what was once a medicine are irrevocably destroyed, adding cream, sugar, chocolate syrup, even topping it with gummy bears, captures the social media snaps of the youth. Kit Kat confectioneries flavoured with Japanese tea are popular, but where is the culture? In a plastic cup with a lid, it seemed during my recent trips to Tokyo and increasingly even in the more traditional Kyoto. Except at some spaces, most of the new tea and dining rooms designed by Simplicity with Saboe in mind. I inquired: Where is happiness in Japanese culture now? “Respect for etiquette and orderliness of tacit understanding is live in Japanese consciousness and itself is a culture. We should be proud of this culture and I would like to spread this culture to the world.”, he replied.

Sen no Rikyu formalised chanoyu or tea ceremony into the Japanese culture some 500 years ago. The strict series of procedures (temae) include the design of the architectural space (chachitsu), the garden (roji) and the utensils, all essential to the wholeness of the spiritual experience (tea was introduced by Zen Buddhist monks to Japan from China over a millennium ago) of drinking tea in a company. Although, in the midst of the 20th century traditional Japanese tea rooms spread around the world as far as to Monaco, Paris, Prague, New York and San Francisco (the Zen group), the local associations remain niche. Rikyu’s and his heirs’ over half a millennium old style is outdated and that is perhaps why the tea ceremony in Japan today is more often attended by tourists than by the Japanese. 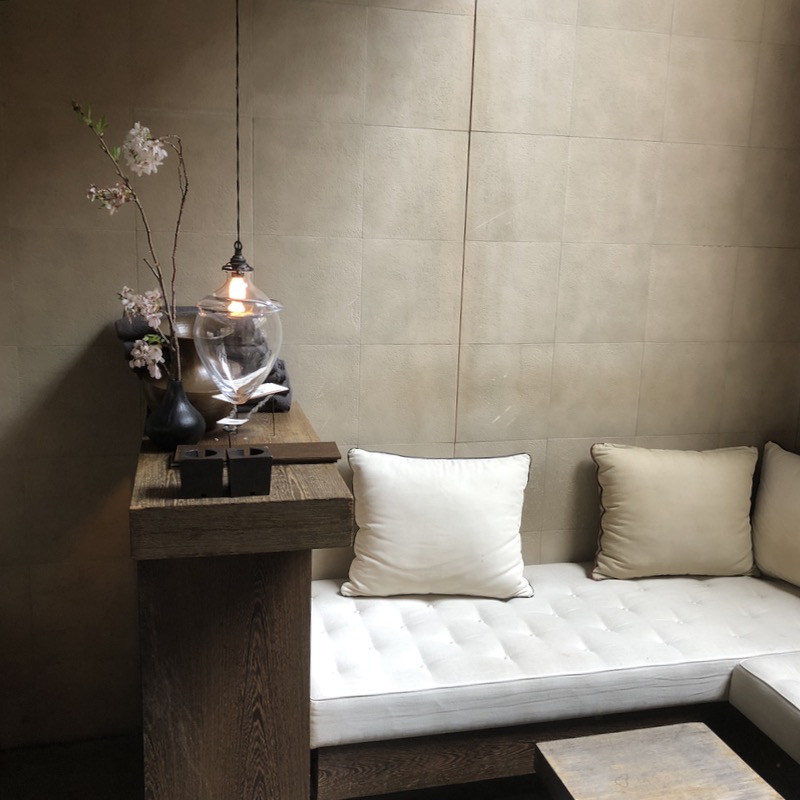 The spaces designed by SIMPLICITY breath fresh attraction to the Japanese tea time. Where tradition meets contemporary needs, the subtle notions of contemplative simplicity gently whisper from the physical works of Shinichiro Ogata and his Tokyo-based talented team.

“To inherit the tradition and keep it alive,

Is simply to innovate and adapt it to the present era

Based on traditional methods and sensibility, which Japan triumphs,

Simplicity endeavors to create the culture of the next generation

By crafting items that fit the modern day lifestyle

And offering a high quality, plentiful life to the world” 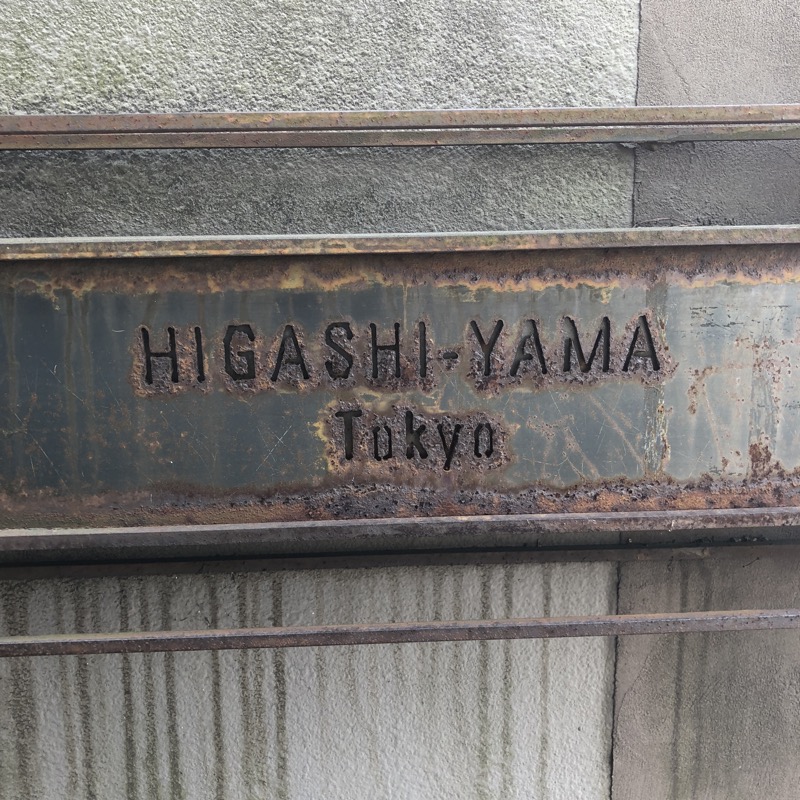 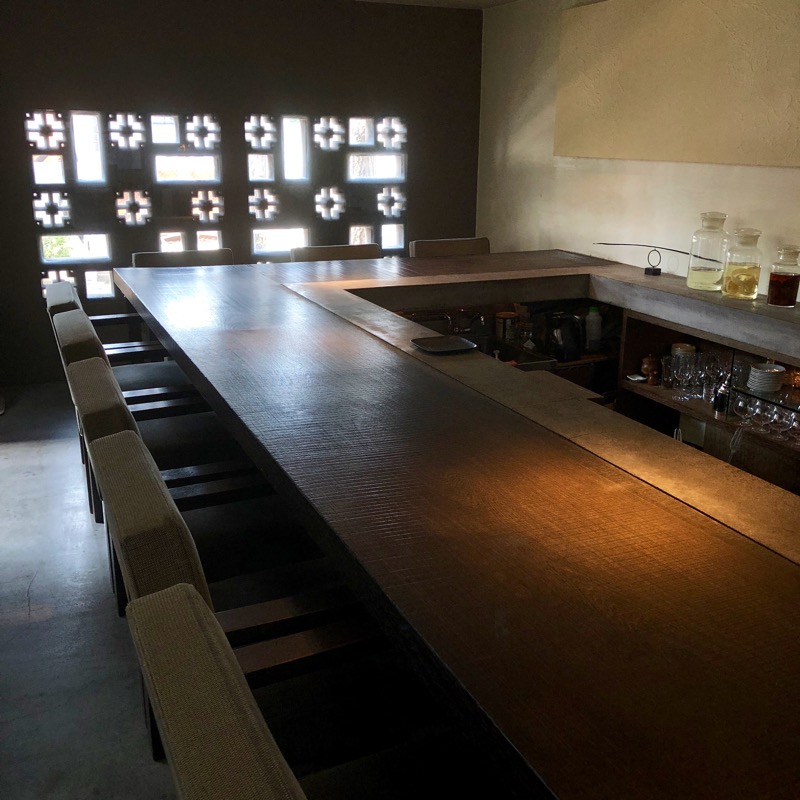 Born in Nagasaki, traveling to the West, and after returning back to Japan Shinichiro Ogata founded Simplicity in Tokyo two decades ago. “No matter where I went, I always came to the conclusion that I was nothing other than Japanese. This certainty became the core of my existence as a designer. To be on equal ground with the world, I realized that I needed to learn my own culture, as well as to feel compassion and be proud of my heritage.” In a building form, the Japanese confectionery (wagashi) atelier and brand HIGASHIYA was born, and the product line S[es] fitted the open kitchen counter and the spare dining tables of the Japanese restaurant HIGASHI-YAMA Tokyo. The street-level sake bar and a contemporary kaiseki meal serving Japanese restaurant is set in Tokyo’s residential Nakameguro neighbourhood popular for cherry blossom viewing. A koi pond welcomes you into this tranquil house of sensory pleasures. 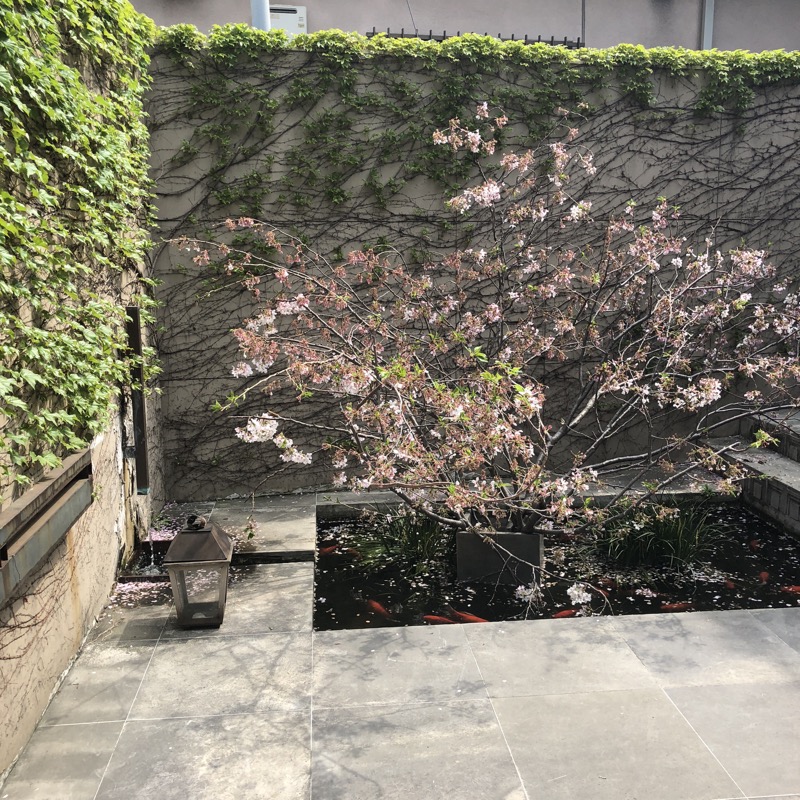 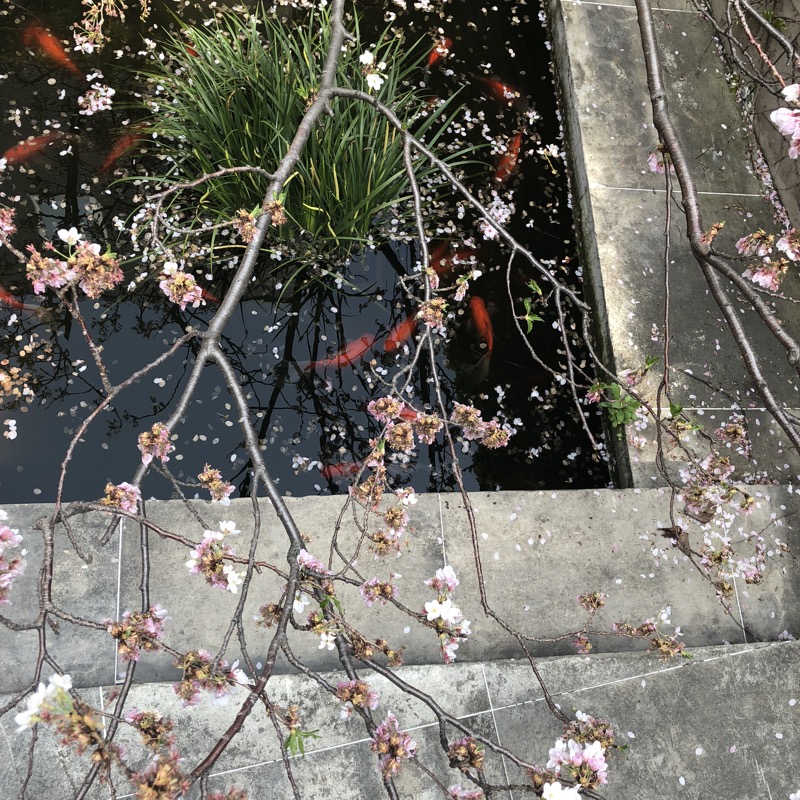 Next came HIHAGSHIYA Ginza, a contemporary tea room with food and a signature wagashi store that disrupted the mindless hive of Ginza. Since, a proper tea gathering in Japan includes a meal, each of the tea projects by Shinichiro Ogata include superb Japanese food. The subtle sweets and elegant savoury snacks are prepared according traditional recipes with some updates, all packaged in design by Shinichiro Ogata so brilliantly, that you want to gift them, unselfishly to yourself. There are now tiny waggish branches selling just the confectionery in the popular shopping zones of Tokyo.

The packaging design got its own stage at ori HIGASHIYA in Nishi-azabu, Tokyo. At this wagashi shop, a Sabo tea room offers traditional Japanese wrapping in a modern style of ori (folds) enveloped in a customized wrapping. 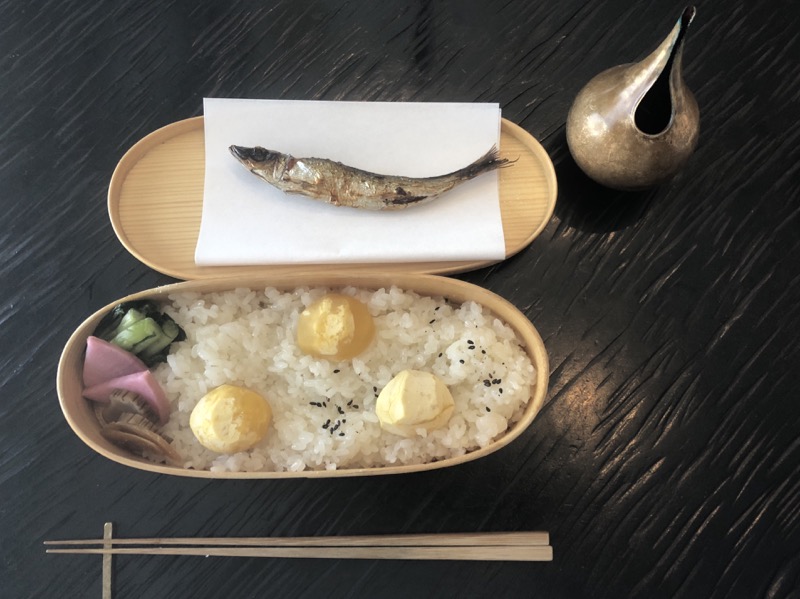 The newest SIMPLICITY and now also SABOE project in Tokyo so far is the mysterious Japanese dining club and tea house Yakumo Saryo (where baishinka wagashi sweets are also made and sold). I believe, this is the best tea house in Tokyo, and I have enjoyed the hospitality of quite a few over the years of journeying to Japan. A close tie are all his other design projects. Inside the Spiral commercial building in Aoyama his collaboration with a tea master Shinya Sakurai yielded an eponymous tea bar called the Sakurai tea experience. The untreated brass, cylindrical and geometric features of Ogata’s footprint resolve the mystery of design. In Fukuoka, Suguru Tokubuchi opened a tea salon and bar Yorozu, that now also shares the concept of SABOE education of the Japanese tea culture. SABOE involves the branding of Japanese tea leaves, design of tea utensils and promoting local confectioneries overseas. Through SABOE and SIMPLICITY Shinichiro Ogata intends to “share the wisdom of living a modest and simple life. The culture of Japan is indispensable in a world seeking balance between mankind and nature. I continually strive to express this in my own way, through food, tableware and space.” 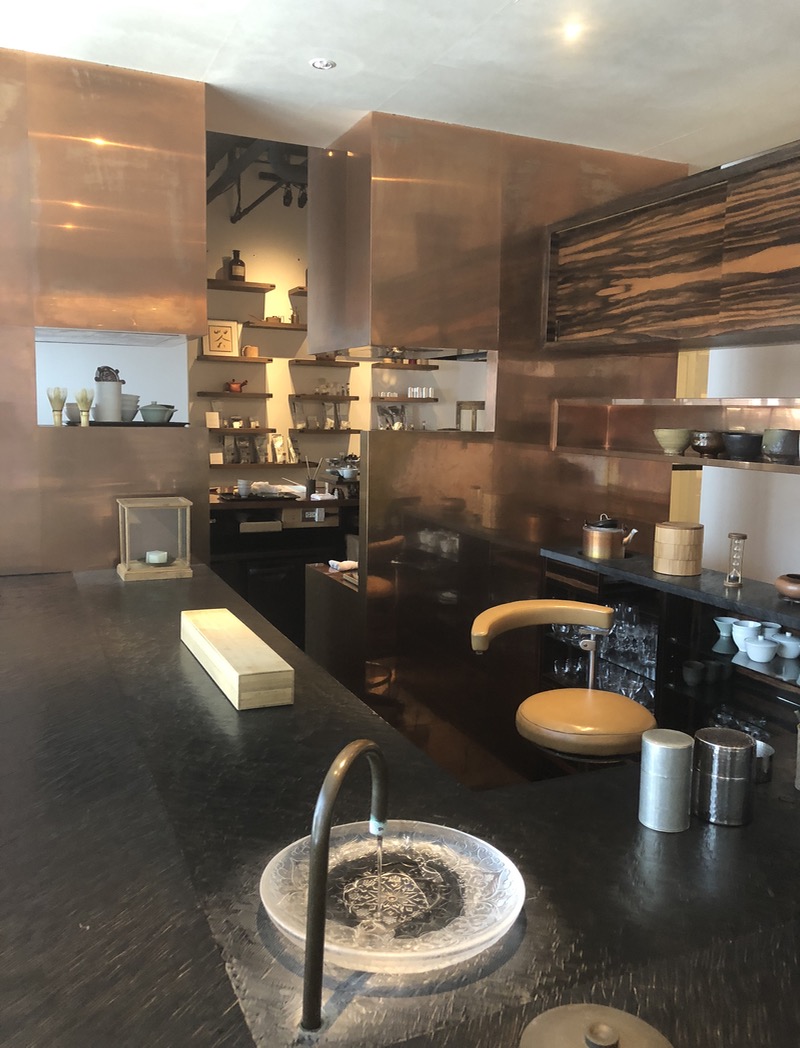 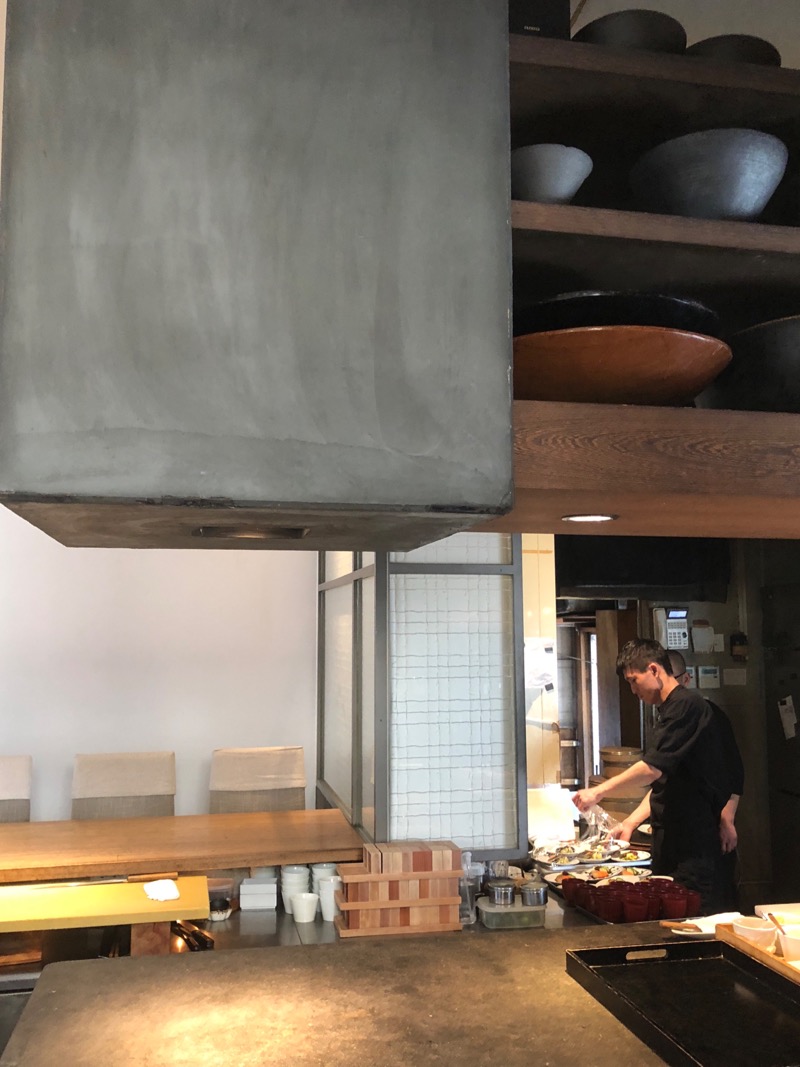 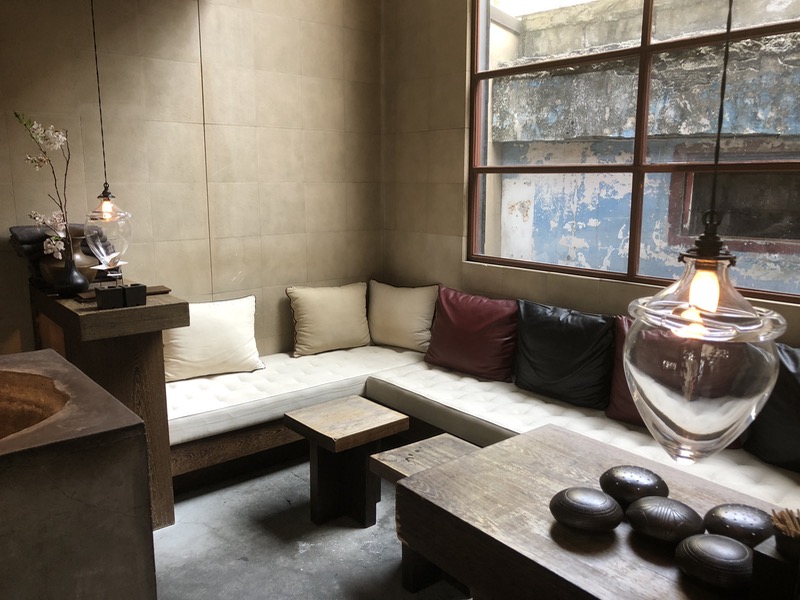 At Yakumo Saryo, there is a garden, the roji of chanoyu, as well as the chashitsu architectural space for enjoyment of tea, and a separate dining room and waiting area with the view of the garden. Contemporary comfort is sedentary but rarely cross-legged, so you sit either at the counter chairs or in the tea room around the large social table by the window. Like a framed painting the greenery of the garden further calms your spirit. Ikebana, Japanese floral arrangement further sets the tea connoisseur in the authentic yet contemporary local cultural experience of Shinichiro style: “When I design, I always make concept based on the history of that area and natural features. I hope, you will find the nature in cosmopolitan and feel nostalgic in modernity from my work.” The art in the rooms is exclusively Japanese as the traditional precept of chanoyu values them in a special way. 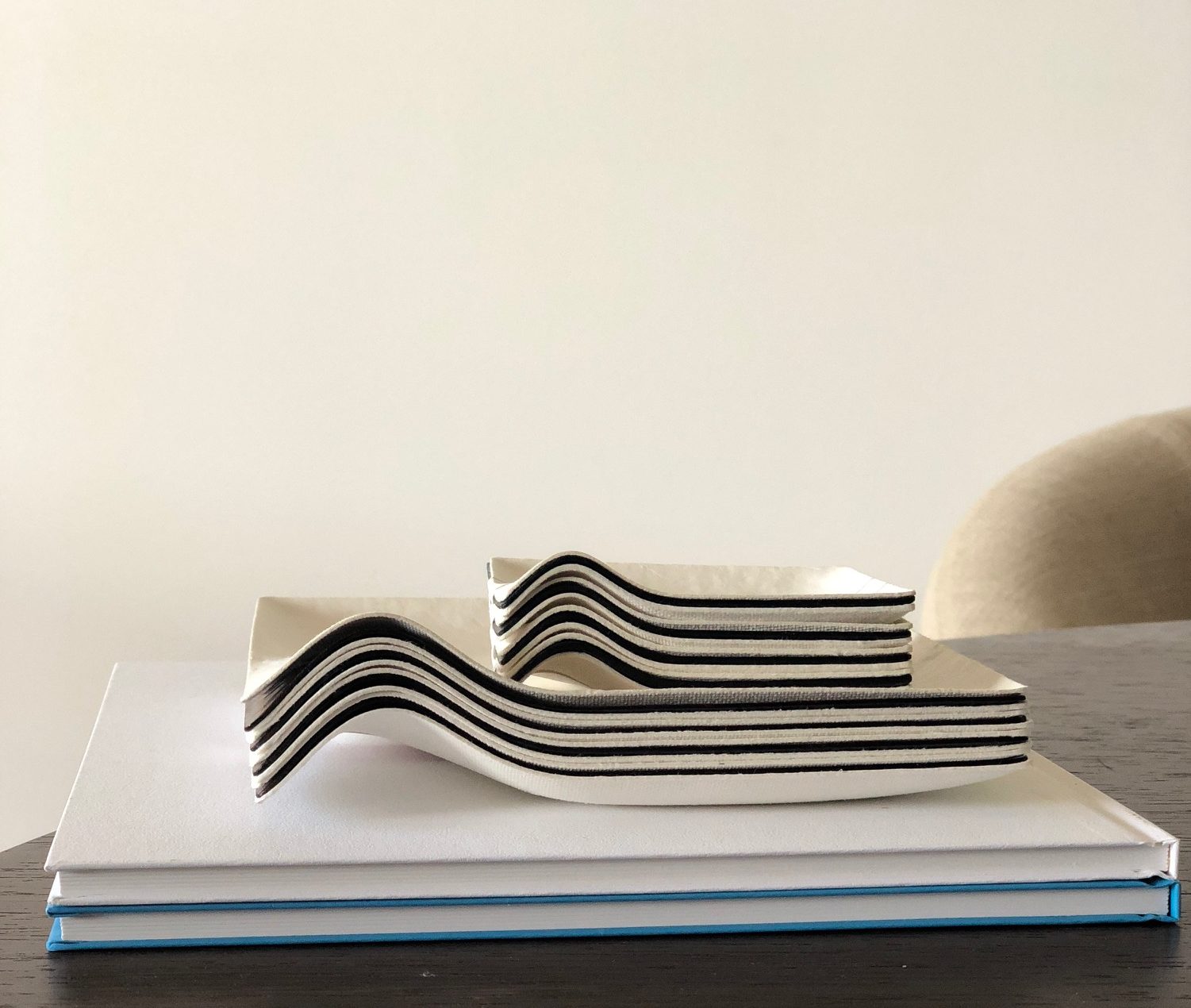 In addition to his own company’s brands, he is responsible for the design and direction of a wide range of projects in architecture, interior, logo, product, graphic, and packaging. He does not attempt to reinstall tradition, but skilfully adapts to “fit our contemporary lifestyle”. WASARA, his paper tableware series, won the Grand Prize and Gold Prize in the DFA Design for Asia Awards and the Chicago Good Design Award. The interior of the Intermediatheque, The University Museum space inside the JP Tower next to Tokyo Station in Marunouchi was also designed by Ogata. Andaz Tokyo called him in (the hotel group usually employs local artisans in designing their interiors and decorations), and the Australian cosmetics Aesop stores in Japan were all designed by him. The University of Tokyo appointed Shinichiro Ogata Affiliate Associate Professor, while two books (most recently Nenge – contemporary flowers and ceramics) include his name to date. What facilitates or hinders his creative flow? “I take inspiration not only from Japan, but nature from all over the world and wisdom of our ancestors. What disturbs creativity, is that creation from human ego such as rationalism, capitalism and chemical things.” Nature be our guide, and we shall listen to its whispers, not the blunders of our Western ego. Finally, I asked him:

Where in the world would you like to open your first overseas tea room? Why there?

“I have a plan to open it in Paris. Because I think people of high sensitivity gather in Paris from around the world. Another reason is that people in Paris have a good understanding of what am I aiming for with the Saboe tea style.”