"The colour palette of the tea leaves as well as the brew can range from a balmy yellow as the sun in a hazy sky for long jing, through vibrant green as with sencha, deep grassy green for gyokuro to a chestnut brown tinge for roasted Japanese teas and Chinese gunpowder."

Of all teas, green tea is perhaps the most misunderstood. As there exist various shades of green, the colour palette of the tea leaves as well as the brew can range from a balmy yellow as the sun in a hazy sky for a long jing, through vibrant green as with sencha, deep grassy green for gyokuro to a chestnut brown tinge for roasted Japanese teas and the Chinese gunpowder. 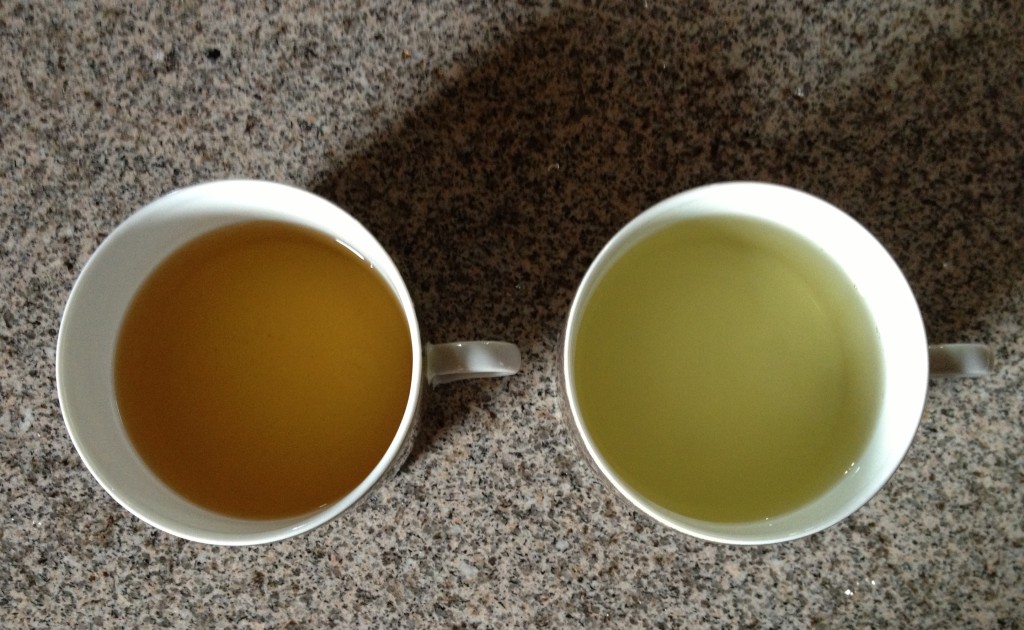 Green tea remains green because it does not oxidate and does not loose its chlorophyll. To stop the oxidation, the enzymes that cause this natural process must be killed by heat so they are either steamed (in Japan) or pan-fried (in China). This means that the green teas (together with the least processed white tea) retain their antioxidant and anti-cancer, health-promoting benefits. 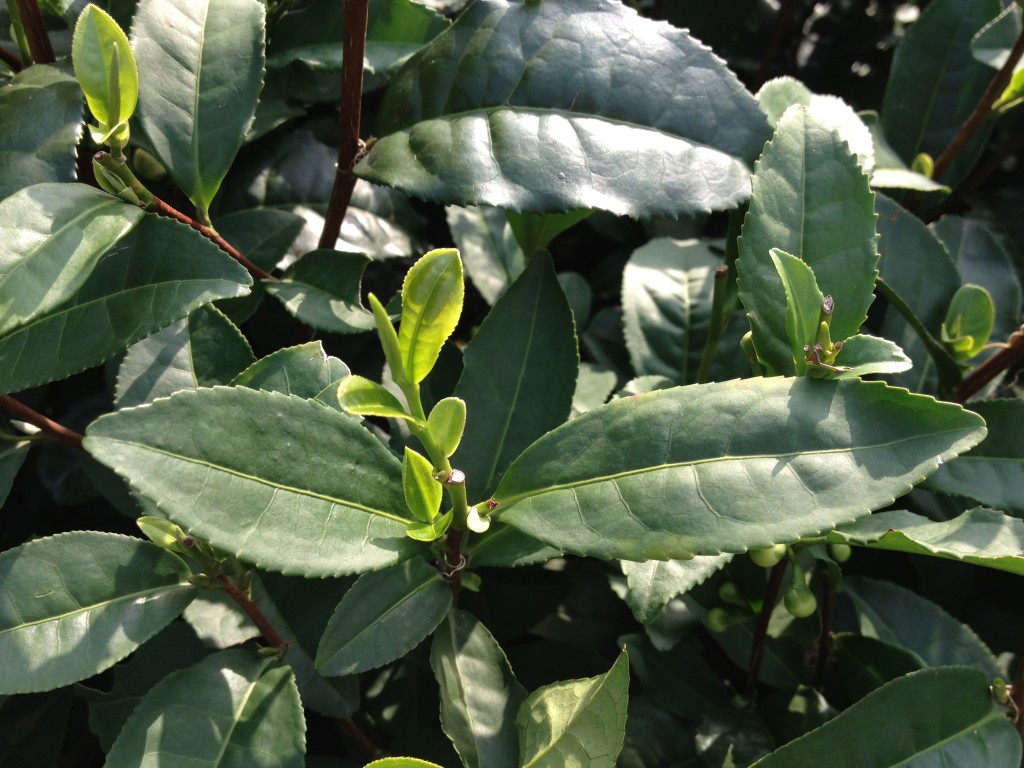 Unfortunately, water in the developed world is chlorinated and green tea does not express itself very well in it. It does not taste the same as if you prepared it with spring water, and most purists use either bottled or filtered water for a better taste. In Long-jing, the most revered of the Chinese green teas, there is a belief that the ‘Dragon Well’ tea, as it’s translation goes, shows at its best when made with water from the local well. Unless it was a fantasy invented by local tea farmers, decades ago it probably did but in the modern-day polluted context, you better use bottled water. 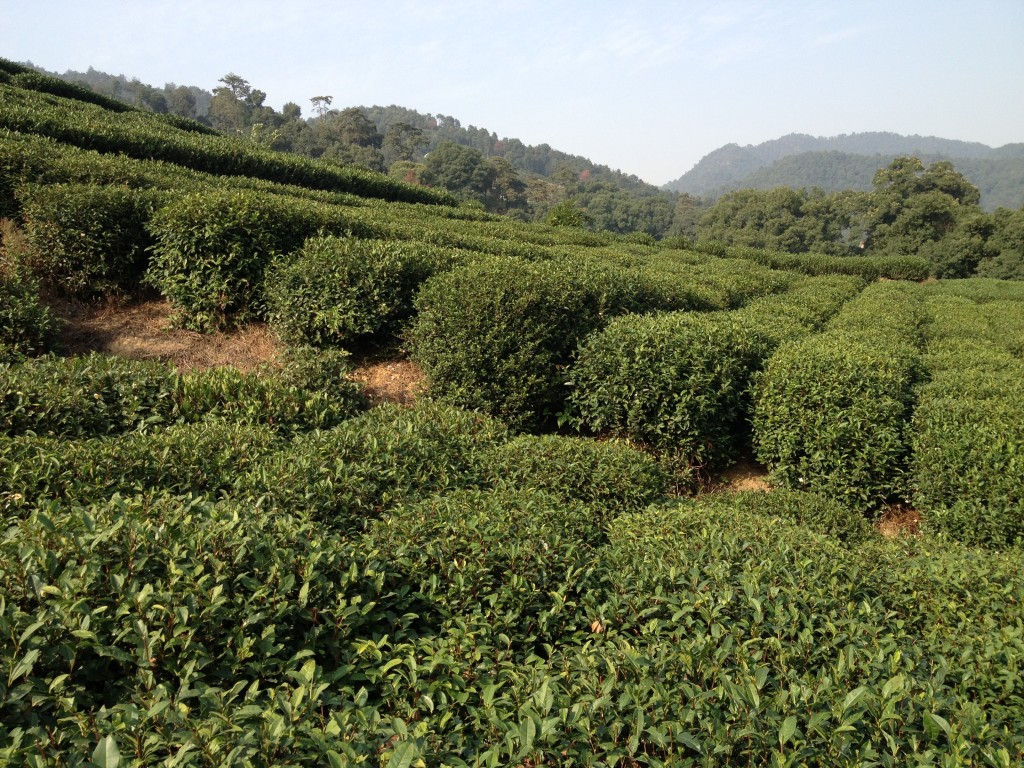 In Japan, the most popular tea became the roasted  hōjicha or a toasted brown rice in genmaicha. In both of them, the slight processing of the leaves attaining smoky aromas can mask the flavour otherwise acquired from treated tap water.
As with water, the provenance of the tea leafs themselves makes a tremendous difference in terms of taste. Not only the accustomed sensitive palates that slurp tea daily but everyone, who has a cup of Japanese sencha and a cup of Chinese green tea will recognize the difference. 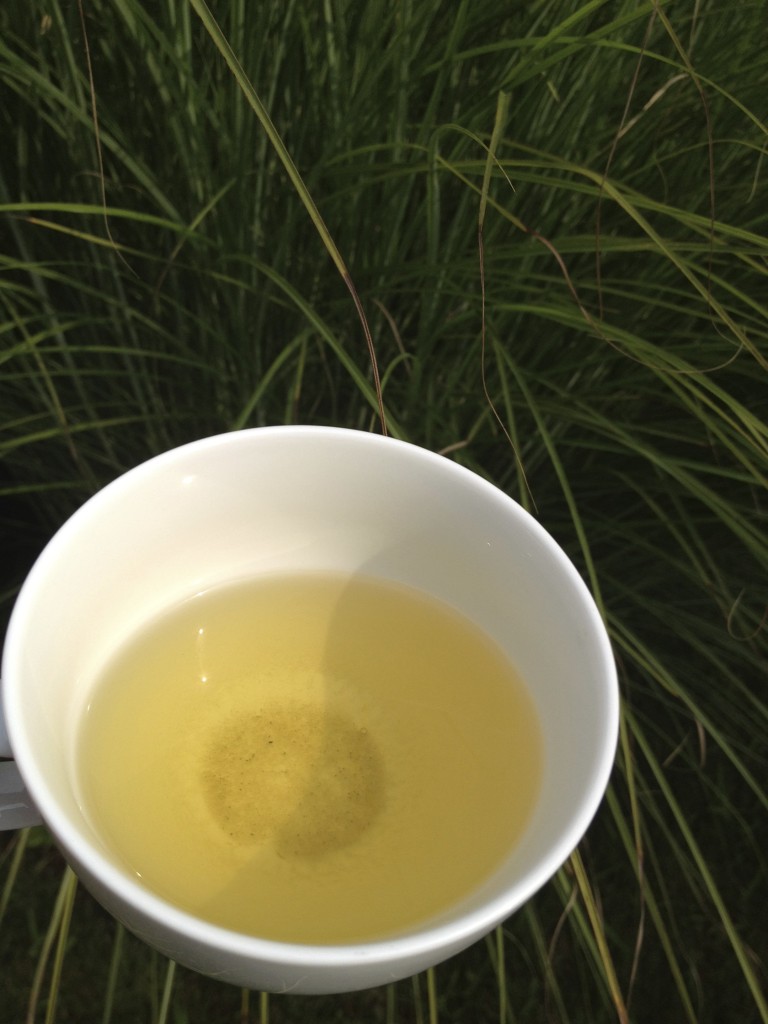 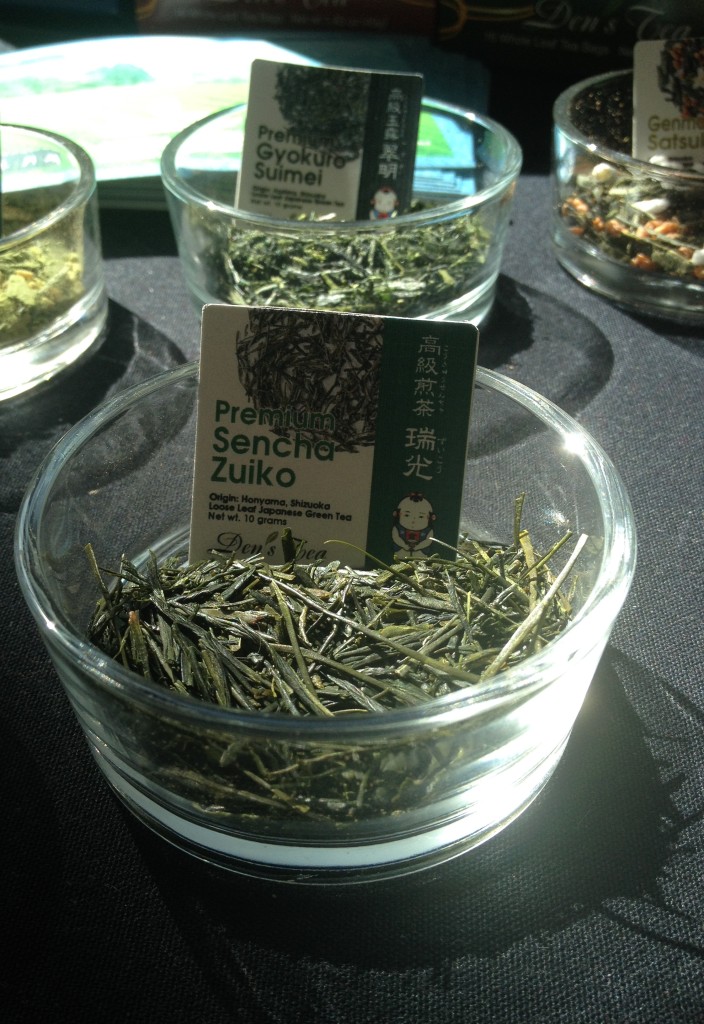 Japanese gyokuro is perhaps the most striking, and requires an accustomed taste since it is almost like a meal, very thick, grassy and concentrated, but also very fresh with a dominant umami flavor.
Sencha is still grassy vegetal, but has more warm smell recalling summer. It is youthful, fresh and more delicate than savoury gyokuro. It is more easy to drink.
While, the praised Chinese Long-jing is more mellow, smooth, lighter in color and more nutty and subtle on the palate. It is magically energizing and relaxing at the same time. A long, chalky aftertaste is perhaps the culprit for the kick after the silky texture of the tea is swallowed.
Another popular Chinese tea, the gunpowder that has leaves rolled into small pellets, unwinds a deep earthy, almost smoky, darker brownish color, but still refreshing fragrance.
Laoshan Green is grown on a Taoist mountain in Shandong province in the North. It looks like a long rolled thin noodle and smells like a chicken consomée. It is not as fine as Long-Jing, but its deep chestnut aroma is easily appreciated by the masses. 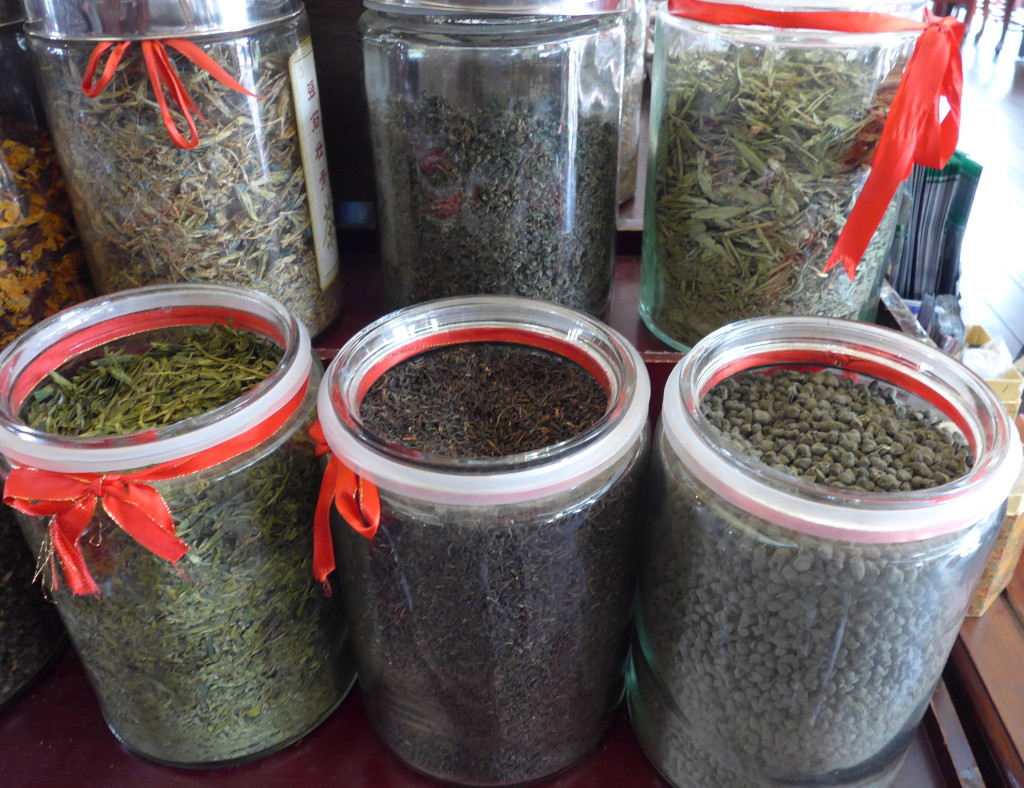 Taiwan is more famous for its oolongs (partially oxidised green tea), but there are some green teas as well. The Taiwanese ‘Dragon Well’ I bought from the Yauatcha in London tasted different from the one from China. It was more smoky deep, and dynamic, with cigar aromas that had a distinct effect on my mood, unlike the Hangzhou Long-Jing that was more delicate.
“Green” slightly oxidized oolong can look like green tea. Look at the brew below and judge for yourself. It cannot be more green in color, yet it is not defined as green tea. 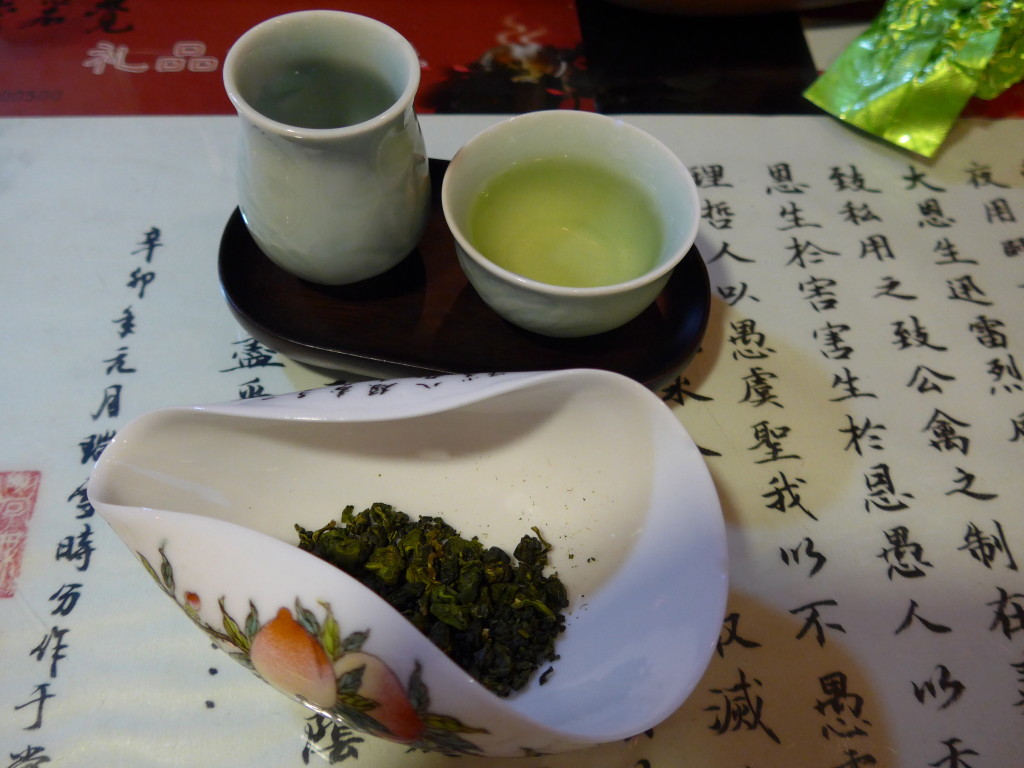 Korea does not produce much tea and exports tiny amounts. Sparrow’s Tongue or Nokcha is one of the most known, and I bought a tin of it at London’s Postcard Teas. Made by Korean Buddhist monks from wild tea plants, the first harvests are done by hand. The leafs look like curled spinach and it smells like roasted soybean. The savory umami, buckwheat, miso and salt contrast with more sweet aftertaste. It is a shame it is not widely available as it is very intriguing, yet rare. At Le Teashop in Monaco, I sipped on a Korean Organic green tea, which hinted with its umami backbone onto a Japanese sencha yet it was less savory and more round like a typical Chinese green tea.
Even India produces some green teas, notably these from Darjeeling are interesting. Although they not as elegant and complex as the area’s famous black teas, the green tea is quite rare and sold for a high price at Mariage Frères in Paris. Like the Japanese sencha it is more vibrant and sharp, but lacks umami. Ayra garden makes a good one.
To confuse it a bit more, some countries mark their tea with the popular styles of another country. Like this Indian Darjeeling sencha that I saw in Mumbai. Its taste resembles sencha, but it is not as fine as these from Japan. 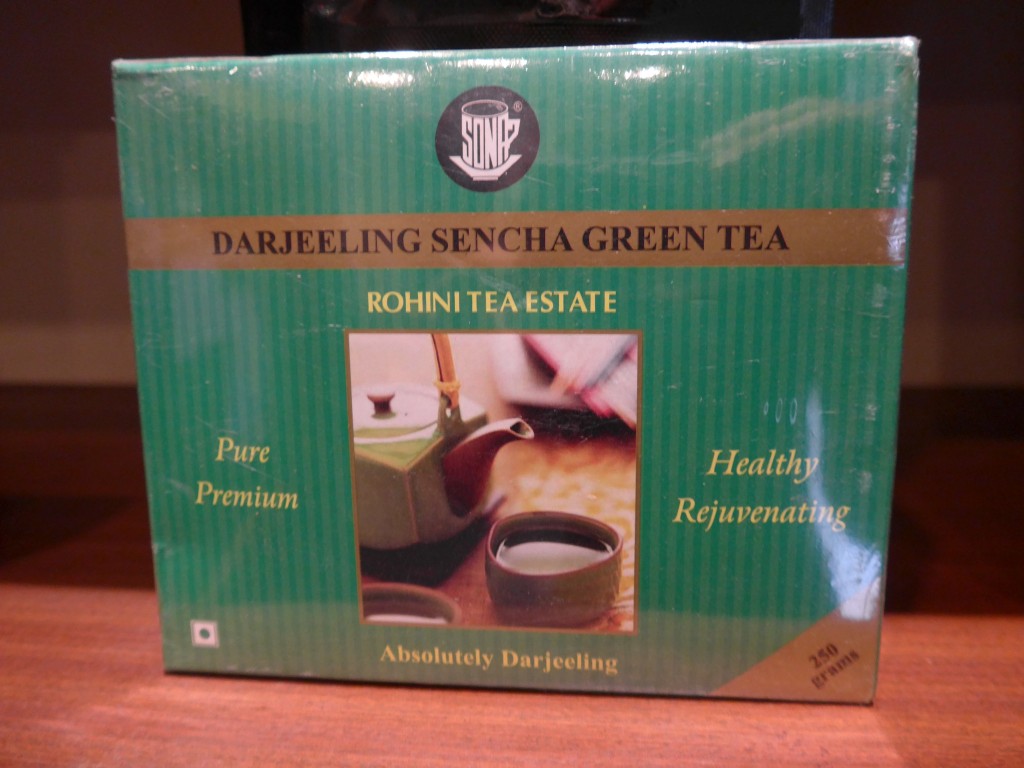 As you see, it is not only the country but also the region, the elevation, the rainfall, the amount of sun and humidity that affect the taste of the tea. As with wine, a Chardonnay from Meursault in Burgundy can taste very different from a Chardonnay from Italy, Australia or California. Unless one is trying to manipulate the making process so to resemble its admired competitor.
Not only the place where tea is grown, but as slightly with rolling of the leaves of the gunpowder, green teas can be treated in different ways, except for oxidation since it would cease to be called green, but oolong, red or black tea (white teas are very different, and the least processed of all teas since they are not even pan-fried after picking, just dried on air).
In Japan roasting tea is popular, either of the tea itself as with hōjicha that is roasted in a porcelain pot over charcoal or adding popping brown rice to tea as with the grainy genmaicha, also known as popcorn tea. The brewed liquid is tinged brown, not green as one would assume with green tea. I enjoy these roasted green teas with a chestnut Mont Blanc cake at Jugetsudo in Tokyo as well as just with cookies at their tiny branch in Paris. 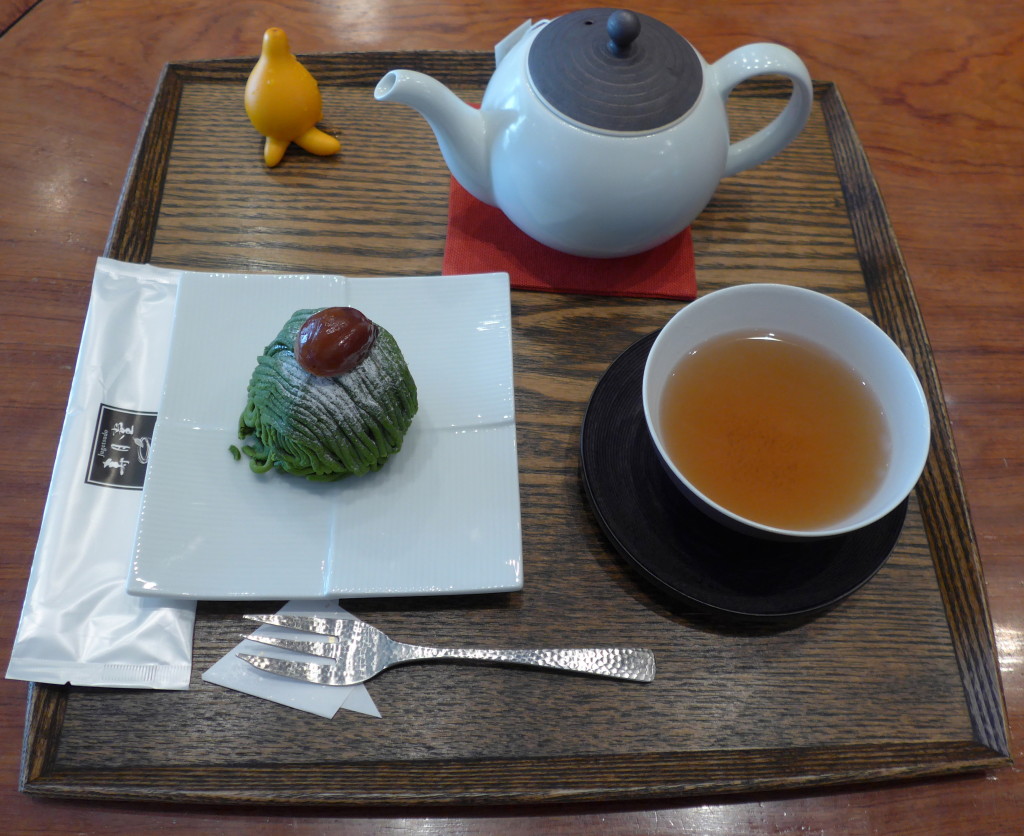 Also, powdered tea or matcha is globally known and very popular since it is easily made into lattes, smoothies, cakes and other delicacies. Powdered hōjicha is less known but very popular in Japan, again in tea lattes (works lovely with oat milk), but also can be incorporated into pastries as Sharon Woodstone does at her Le Teashop in Monte-Carlo.
How would you like your matcha? There are dozens of possibilities in Tokyo … just look at the image bellow 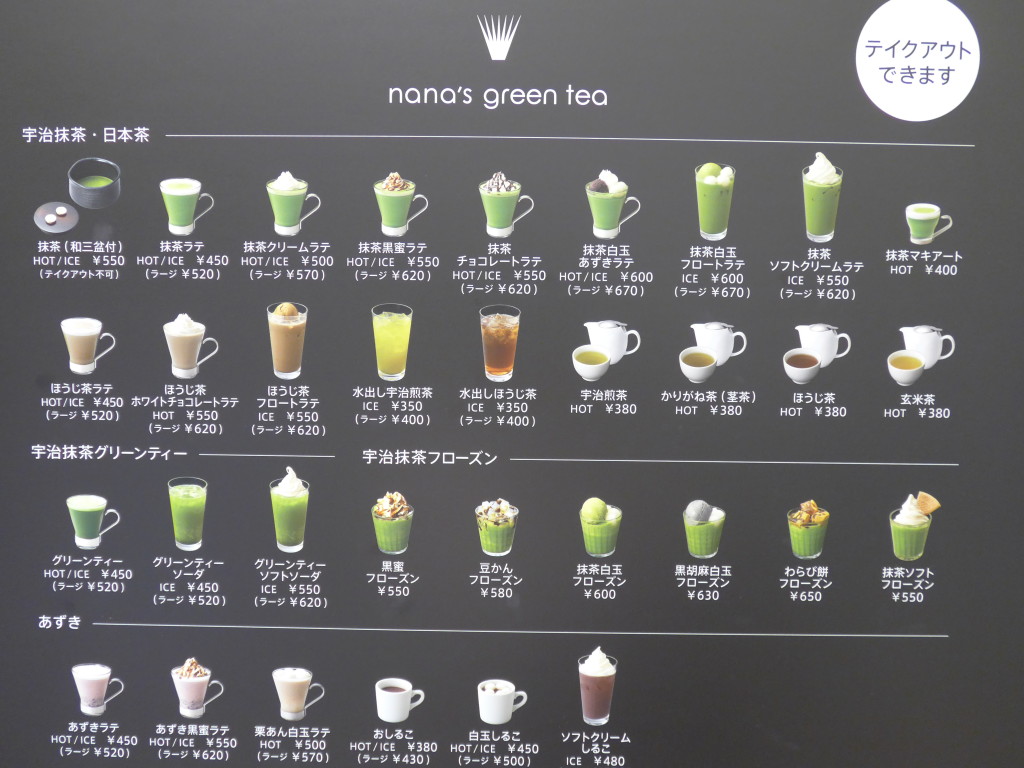 The Japanese tea ceremony also does not happen without the powdered matcha. The whipping and the smooth foam that the powdered tea forms are essential for the spiritual ceremony.
It is also a staple at one of the last courses during the kaiseki set menu meal in Japan. It is served with a small sweet dessert eaten traditionally with a small wooden stick. 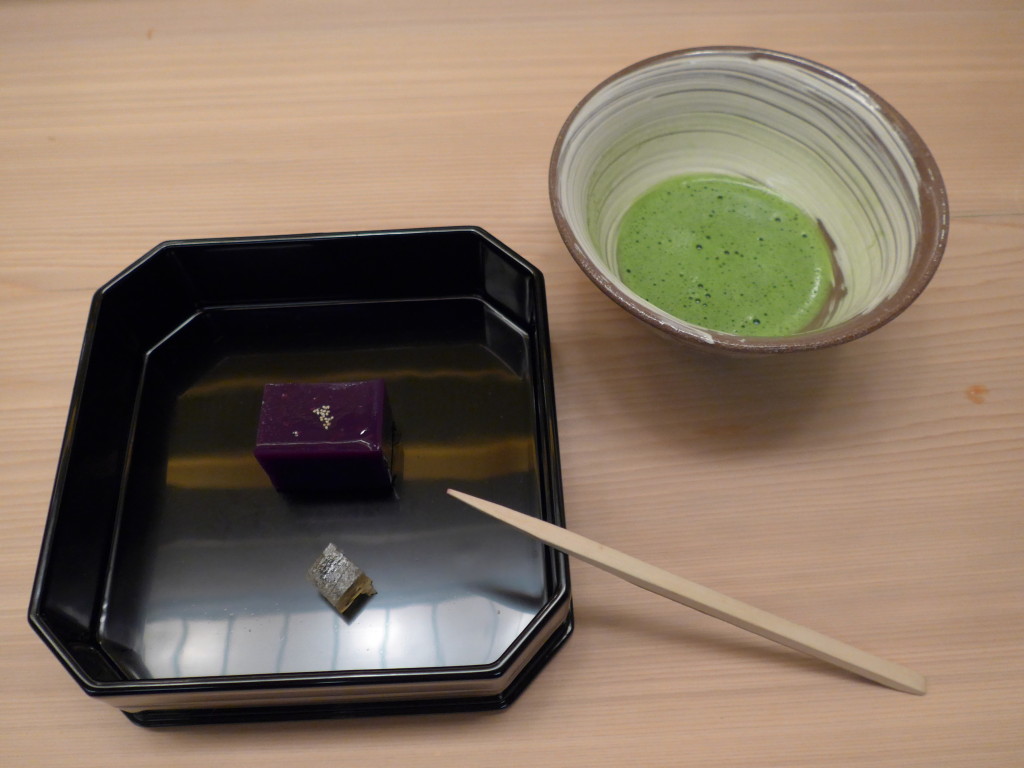 The season when tea is picked is also important. It is well-known that a first-flush (first picking) Darjeeling is different from the second-flush, these are the summer and autumn pickings. It is the same with the green tea. The first spring leafs collected from Long Jing are the most prized and the most expensive. Plus if they were picked from one of the 18 imperial bushes they can fetch £600 for 5g (at Postcard Teas in London). In general, the best Long Jing is picked between March and April. In top quality tea, only the freshest leafy tips are picked. 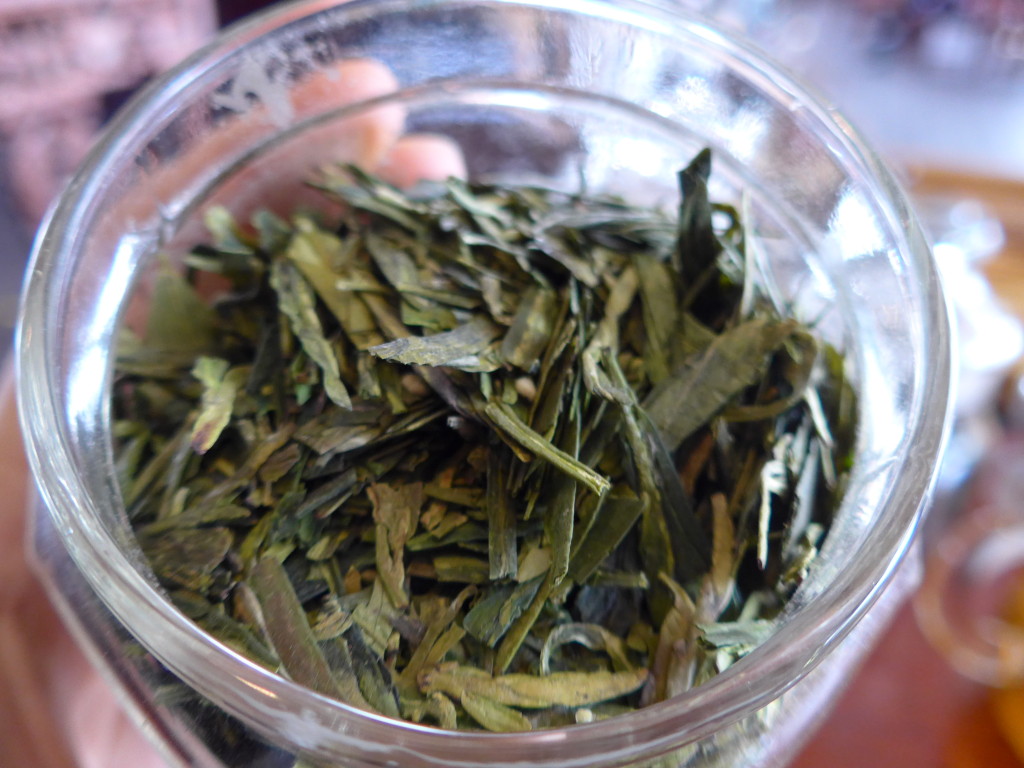 Do not put all the green teas into one pot. They all taste different and the best should be savored pure, without mixing them with herbs, spices, and other flavourings (like bad wine used to be in the Ancient Rome). Only very experienced tea blenders can achieve an intriguing balance with the lesser quality of green tea.

The method of brewing is similar for most of the green teas. In general, they should be brewed for 1-3 minutes in a warm, not too hot water. Around 70 degrees celsius is the golden rule, yet it can be lower as is the case of Japanese gyokuro (50-60degrees). There are some tea expert voices that call for a shorter steeping of sencha. In Tokyo, a tea sommelier at ChaChaNoMa invented a very intriguing system for the best expressions of the tea he sells. Ice-maceration is one of them.
Powdered tea is prepared with a bamboo whisk in a special ceramic or clay high bowl (a highly collectable matcha bowl) from which it is usually also sipped, except for your takeaway matcha latte bought at a high-street chain store.
And of course, personal tea preferences and one’s palate play a huge role in appreciating the different teas. Whether it is green or not, if you do not like one, try the other. Be open-minded as tea is healthy so it is perfectly fine to try as many as you can, just not before bedtime. Our mood also influences our enjoyment of a cup. If you need to lift-up get a refreshing sencha as it slightly tickles your tongue, and if you want to relax then get a cup of a deep and mellow Chinese Long-jing or a soothing roasted green tea.