Flexiterianism is the most realistic, balanced diet that is not too restrictive while still being sustainable for the alarmingly growing human population.

Flax & Kale in Barcelona subscribes to flexiterianism, a breed of a semi-vegetarian dietary lifestyle, with the occassional inclusion of meat, fish, eggs, and a rare sight of dairy on the colourful and detailed healthy breakfast, lunch and dinner menus.
Founded in 1979 by the health-conscious Catalan chef Teresa Carles Borràs, the 80% plant-based café, restaurant and bar, Flax & Kale was the veggie trend setter in the city of meat and seafood-loaded tapas. Daily packed, the brunches are roaring with a healthy human buzz so Teresa’s grain, nut & vege-centric eateries now venture into new locations in and outside of Barcelona. 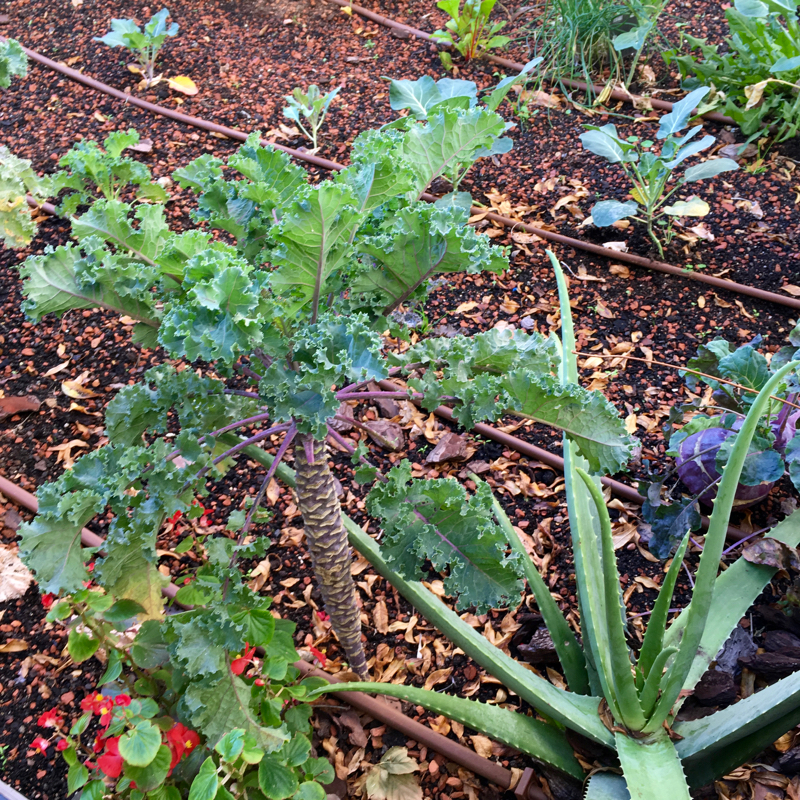 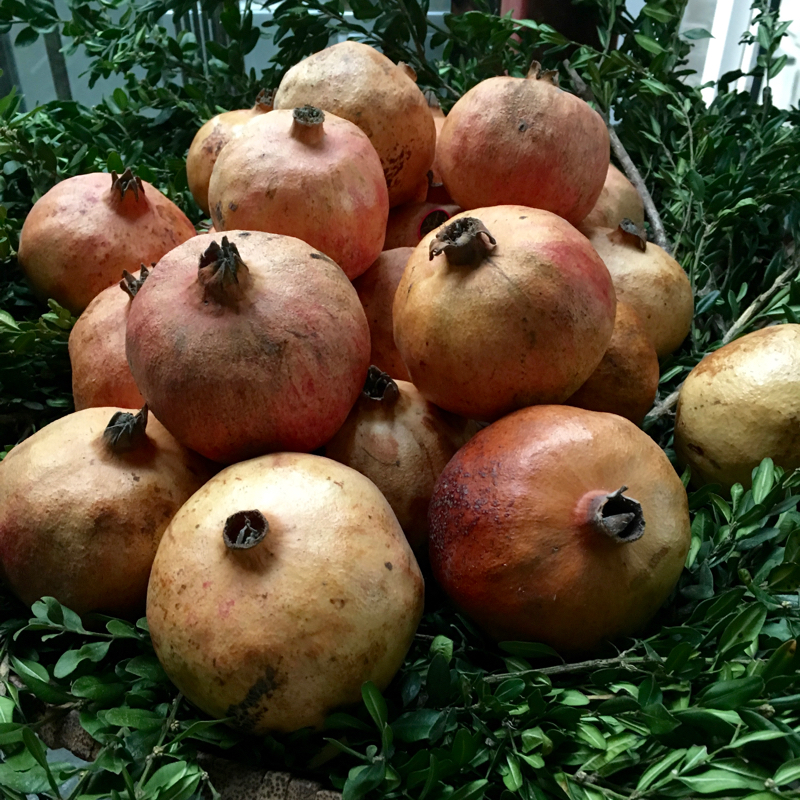 Flax & Kale has a great terrace to be on sunny days, so abundant in Catalunya. There, the rooftop vegetable garden flashes leafy green shades even in December. Sipping and munching on the tasty servings enjoy the vista of the church of Parròquia de Sant Pere Nolasc Mercedaris, the dome of which is embellished in a colourful mosaic. The bells dinging as the old heralds of time. The almost sixty-years-old Teresa’s growing up on the farm land of Lleyda inspired her to growing the fruits and vegetables or purchasing from local farms for her restaurants.
Flexiterianism is the most realistic, balanced diet that is not too restrictive, while still being sustainable for the planet that is increasingly overwhelmed by the alarmingly growing human population. Unknowingly, perhaps due to my strongly aware feminine instinct, I subscribe to this lifestyle, where an occasional animal protein is consumed in additional to the predominantly vegetarian diet. Socially and more practically, for a frequent traveller disembarking in the global urban mazes of tempting gastronomic hedonism, it would be too challenging to become fully vegetarian. My semi-vegetarian eating habits were squared by my doctors, who recommended for many health reasons to keep eating little meat (once, maximum twice per week). Plant-based eating is the way to go for most of us. 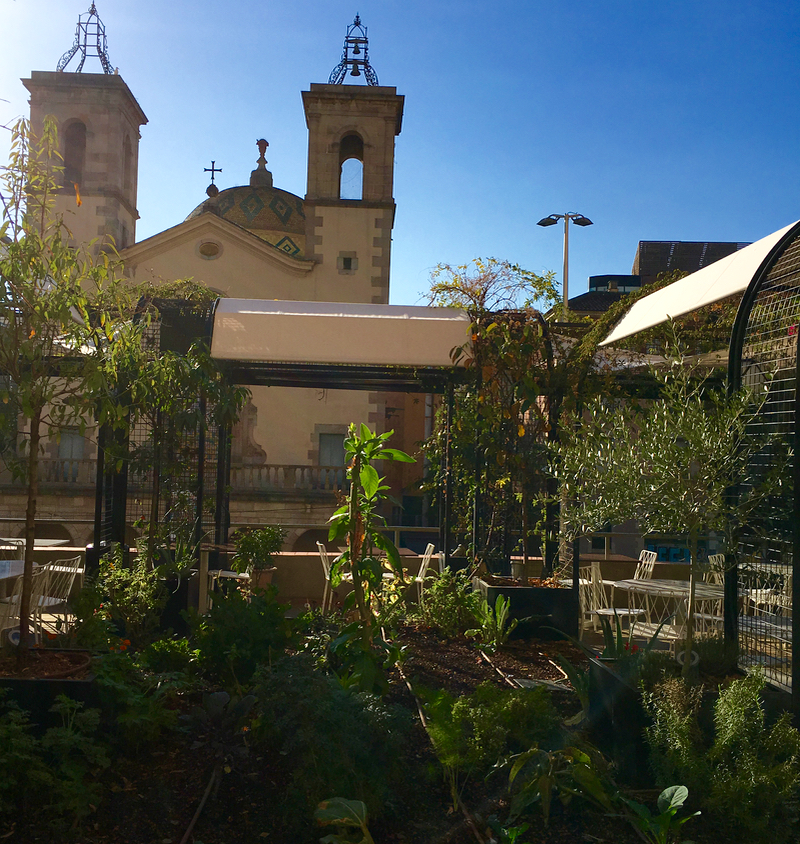 Finding the balance with Flax & Kale while in Barcelona

Preparing tasty and healthy food, while being sustainable Flax & Kale became my go to breakfast recovery after an indulgent gastronomic night at one of Barcelona’s incredible restaurants. The morning after is always hard, but walking along the beach, strolling through the narrow carreteras of Barcelonetta and getting to this healthful café near the city’s busiest vein, the Plaza de Catalunya felt the most rejuvenating during my recent trips to the Catalan metropolis.
Restaurants like Flax & Kale, suitable for all social meals during the day and night, make a balanced lifestyle easier and way more enjoyable. Next to ultra-casual eateries, the plant-centric culinary trends swished into some of the best chefs’ consciousness, so now we can all savour the diversity of the earth on any occasion. With top chefs like Alain Ducasse in France, Jean Georges Vongerichten in the US, and Balwoo Gongyang, the chef at the first Korean-style temple restaurant in the world to receive a Michelin star. You don’t need to subscribe to the Buddhist philosophy of non-harming in order to eat better, more responsibly for your own health and for the edible nature’s resources, yet if you eat healthily than you will do less harm naturally. 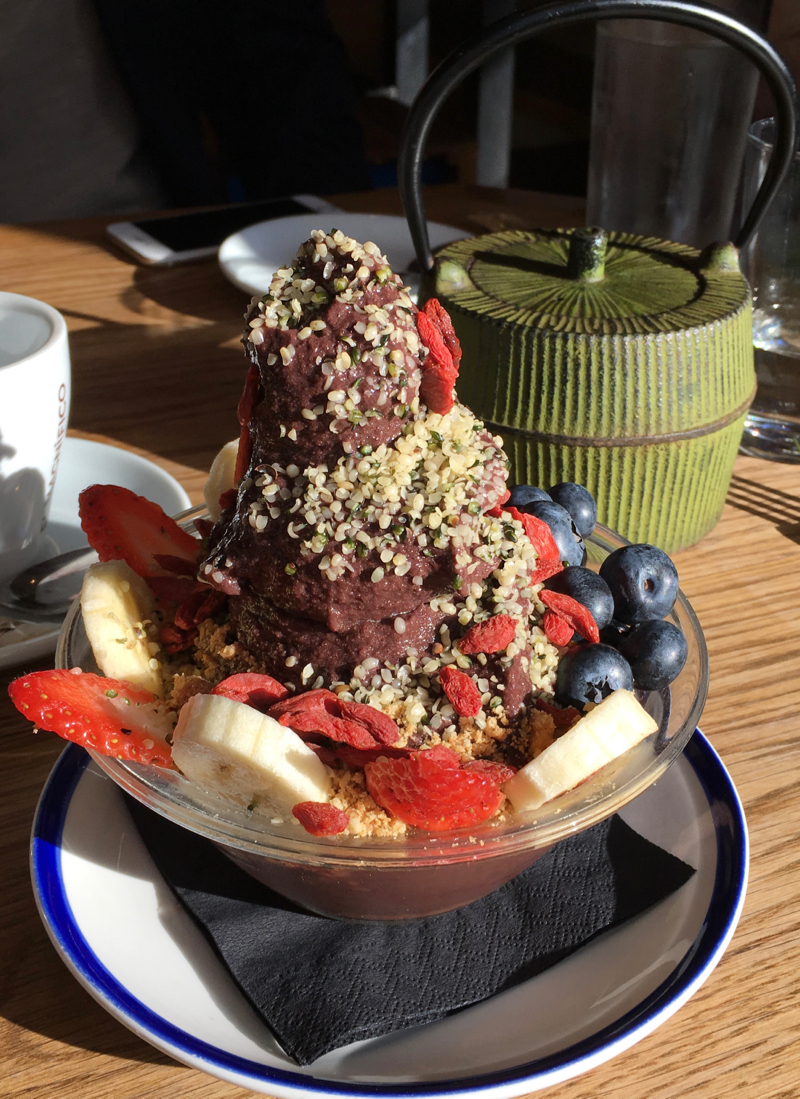 The food at Flax & Kale is based on “organoleptical pleasure” and a small amount of omega3 rich oily fish and eggs. The omega 3s in animal sources are the easiest to absorb by the human body and since they are of a slightly different constitution than when present in plants, their inclusion into our diet is necessary for the brain development and protection of cells from degenerative diseases. Flexiterianism is therefore more healthy and balanced than a vegan diet. We loved the satisfying brunch plate of gluten-free SAVOURY PANCAKES. The generous tower of almond and buckwheat flower based pancakes with red quinoa, corn, Chinese onion and turmeric, interlaced with a decadent peanut cream sauce, mushrooms, rucola, avocados, tomatoes, adzuki beans, pico de gallo and a poached egg. You won’t leave hungry after such a wholesome feast. 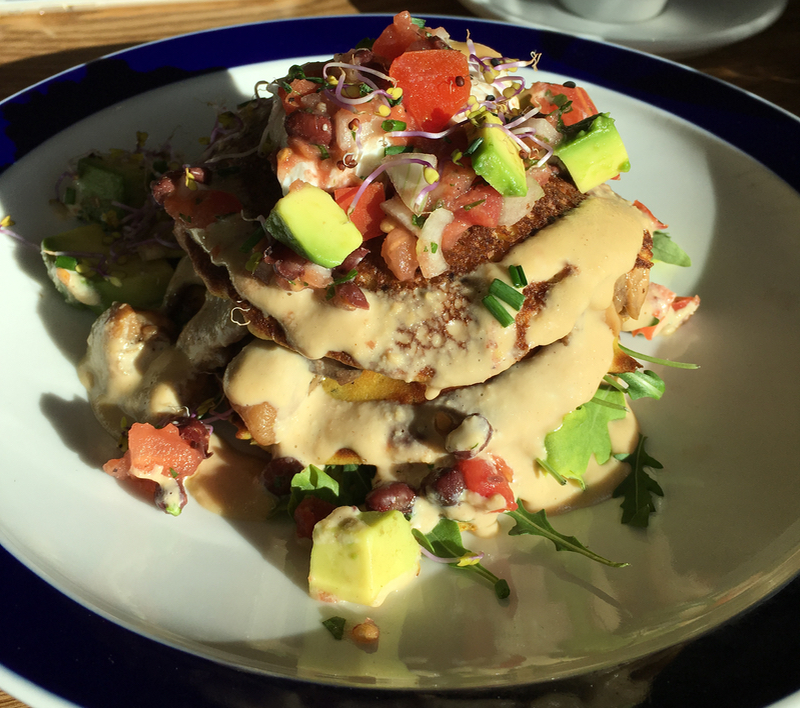 The fibre-abundant flax rich in magnesium and potassium and above all the cancer growth inhibiting lignans (breast and prostate) appears in numerous pastries at Flax & Kale. There are many nutritional benefits to consuming flax seeds that were proven by rigorous science, so eating flax in a bagel or gluten-free muffin naturally sweetened with agave or coconut sugar is great. The Aussie classic breakfast, the AVOCADO TOAST is served with a drizzle of lemon, anti-inflammatory cayenne, flax and chia seeds is a great morning starter that is not too large. 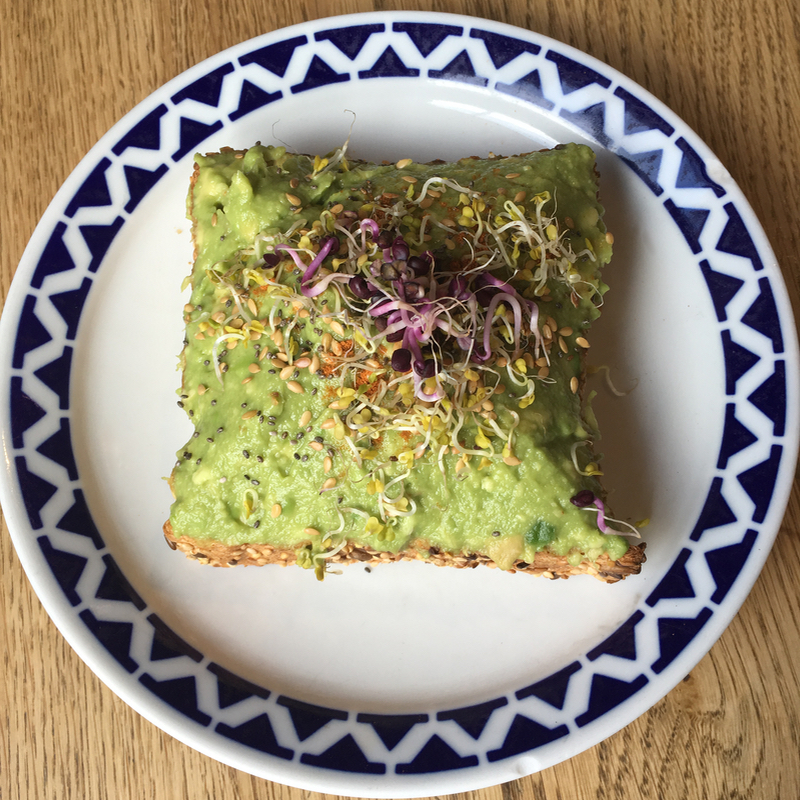 The most disappointing plate we tried were the HEALTHY VEGGIE EGGS BENEDICT served on a house-made english muffin. The plant-based hollandaise sauce with truffles was boring since we could not detect the fragrance of much truffles in the dish.
On warm days the frozen fruit and seed-laced PITAYA BOWL or the Brazilian export – the ACAI BOWL feel more indulgent than you might expect from a “healthy” label, and they are calories-rich and sweetened, be it naturally, so have them on active days. 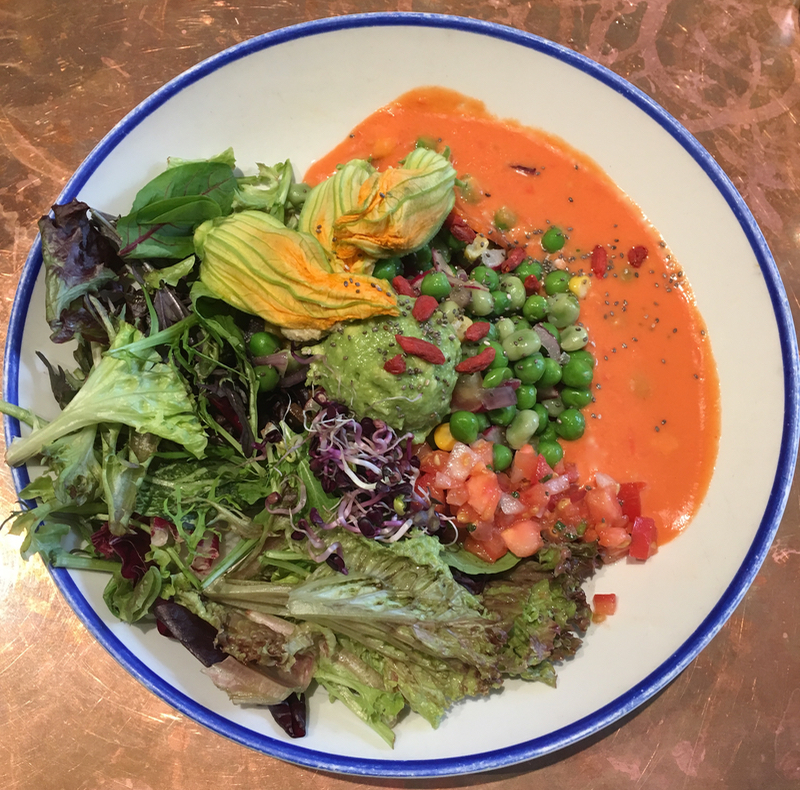 Now popular from California, through Florida, London, Prague to Milan, some raw plates have not been heated above 48°C to keep the enzymes alive in Barcelona too. For lunch I like the seasonal RAW ZUCCHINI BLOSSOMS. The zucchini blossoms are stuffed with peanut and macadamia nuts cream, accompanied by a rich Andalusian salmorejo of sun-dried tomatoes with basil, a scoop of guacamole and pico de gallo, and all sprinkled with goji berries, green salad and radish sprouts, carrot and corn. A colourful and vibrant bowl. There are some fun food choices for kids like the veggie burger or tomato rice spaghettini, that can help you get more nutrients into the little ones. 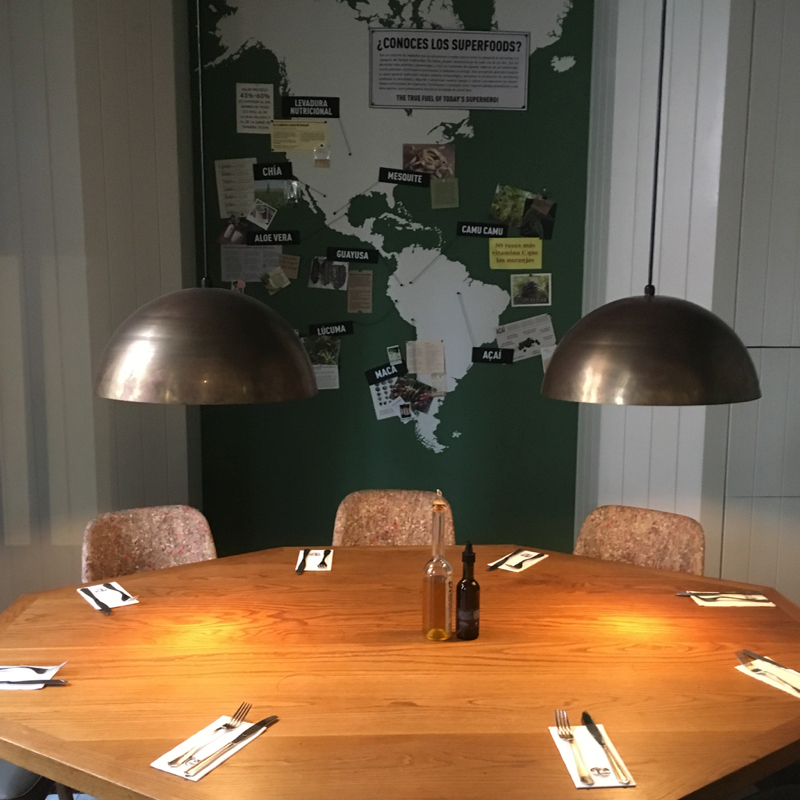 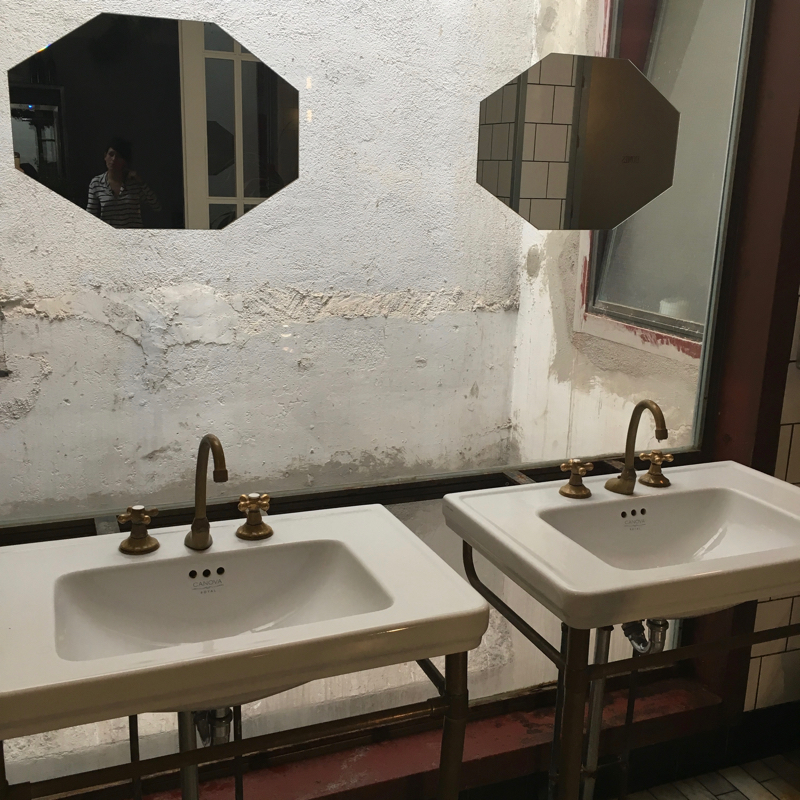 Most of you might appreciate a dictionary of some of the exotic “superfoods” that are used at Flax & Kale. Black garlic, chlorella, maca, mizuna, nixtamalised corn (cooking in alkalising liquid that increases its nutritional value), and the other less familiar global nutritional bombs are described inside the menus and clipped to the map inside a private dining room on the second floor.
From the large, buzzing main dining area, and a smaller room at the back, you must take an elevator to the third floor, passing the kitchen and ingredients storage on the second floor to the charming roof patio. What an expose!
Here, a terrarium meets urban casual design with large leafy plants and red bricks mixing in a bright, large-windowed space. 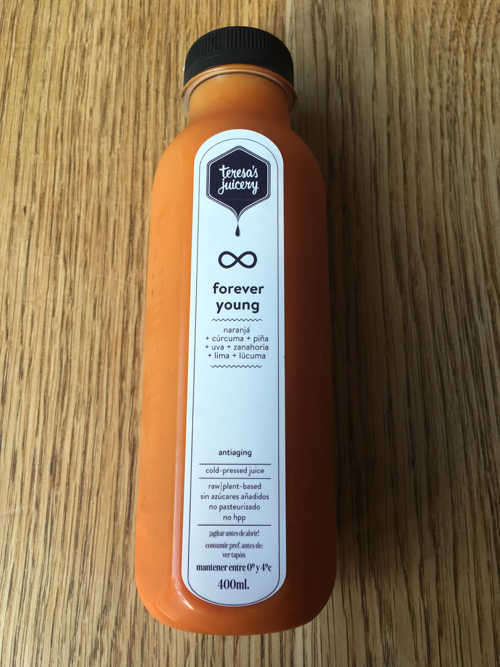 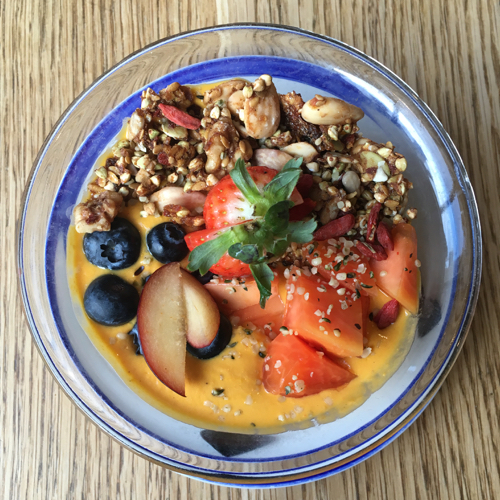 The cold-pressed juice pioneer in Spain to go, order online or sip in

The cold-pressed juices are the founder’s creations sold under the label Teresa’s Juicery, one of the first cold-pressed juicing brands in Spain. Forever Young, an orange blend with carrot, grapes, Peruvian lucuma, turmeric, pineapple and lime juice, and the Green Love (apples, celery, ginger, spinach, pepper, lemon) are my favourite picks.
The gazpachos and soups in the bottle are practical for a lunch to go, and the prices are much lower than at most cold pressed juiceries that I have encountered in any major global city.
The nut mylks are perhaps the best in their class. Rarely I have tasted a better almond mylk, but also the Coconut meat Masala Chai blend sweetened with low-glycemic coconut sugar is heavenly. You can have the version with turmeric sweetened with honey instead. As tiger nuts make the paleo inroads on the grocery shelves, Teresa soaked them and strained a rich mylk for her twist on Mexican Horchiata with agave and chia seeds.
For an after workout, healthier energy reboot try the superfood energy protein balls and bars. The ENERGY SPICY BAR is made of almonds, walnuts, raw cacao, cayenne pepper, pistachios and antioxidant-rich goji berries, and is not that sweet. 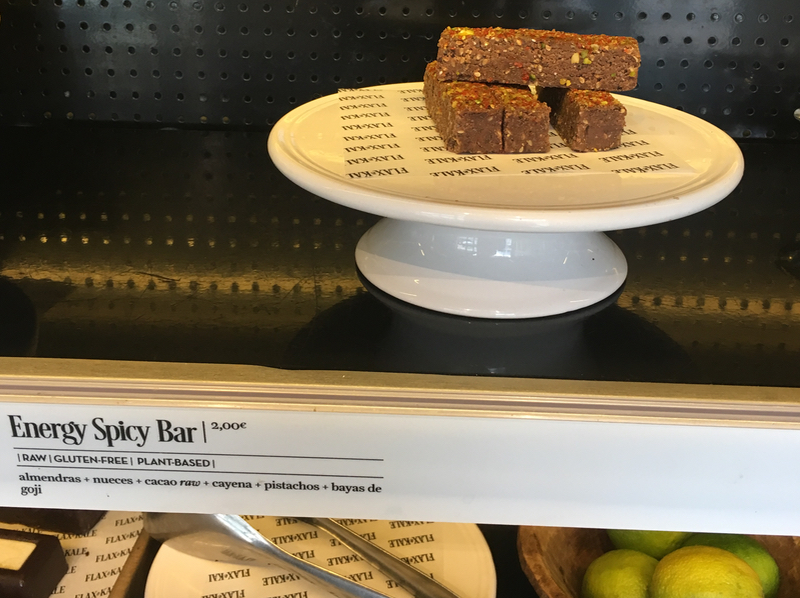 TERESA CARLES has recently opened a new Vegetarian Restaurant nearby and Teresa’s Stairway to Health, a fast-health-food concept. Many ingredients come from Lleida, her birth region. Like these home-made marmalade fruits:

Adding only the necessary amount of brown sugar to let the cooked fruit talk, her marmalade is used in breakfast wholewheat toast (can be replaced by spelt croissant).
Some cartoonists may imagine a flexiterian as a liberal thinker relishing kale with a good shaving of parmesan, a thin, athletic and energetic individual, flexing the biceps over a vegetable patch and caressing all cattle with respect. I am very athletic, eloquent (my mouth is definitely very energetic), tall, and I do not hang on preaching the one way only, I am open to reasonable revisions. Let’s be flexible, let’s all become flexitarians, and keep our awareness focused on reducing our meat consumption. After all, there are some many delectable plants, and the cookbooks with some chefs today stretch their veggie-based imagination beyond your wildest dreams of carrots and rabbits jumping happily in the Garden of Eden. Let’s enjoy our food, responsibly and creatively!
C/Tallers 74B (Cantonada Gravina), Placa Castella, Ciutat Vella, Barcelona
+34 933 175 664