Rotating seasonally, the menu follows the sun, the moon and the thermometer. Residing in Central Europe makes winter more challenging so veggies are pickled, dairy is fermented and fruit is transformed into jams and marmalades.

Eska bakery and restaurant in Karlín is Prague’s upscale echo of San Francisco’s Tartine Manufactory. A must go for foodies interested in made-from scratch, baked, fermented, and pickled slow-food made in Prague principally from local ingredients. The hipster hood of Prague, while rejuvenating itself rapidly in recent years, Karlín is now accommodating locally working youthful middle class. Far from being edgy in the Mission district of San Francisco vibe, the flat bed of Karlín stretching between the Vltava River and Žižkov hill benefited from the influx of growing companies into its central, yet tourist-free homeland. 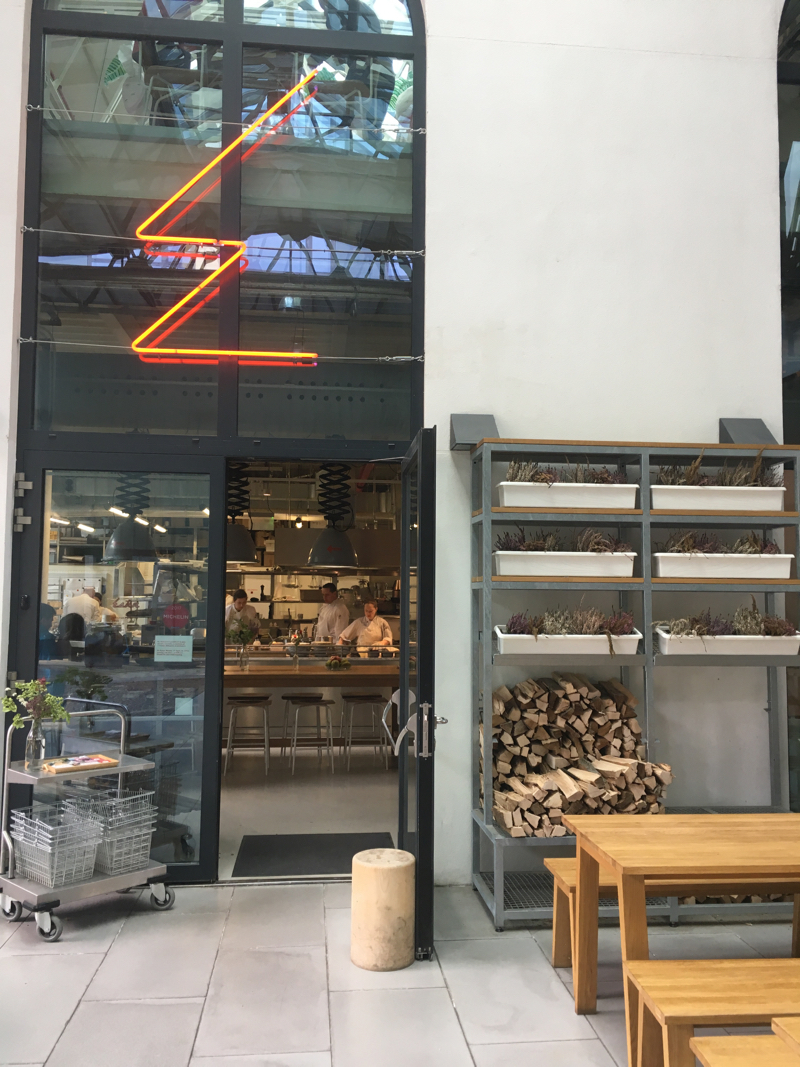 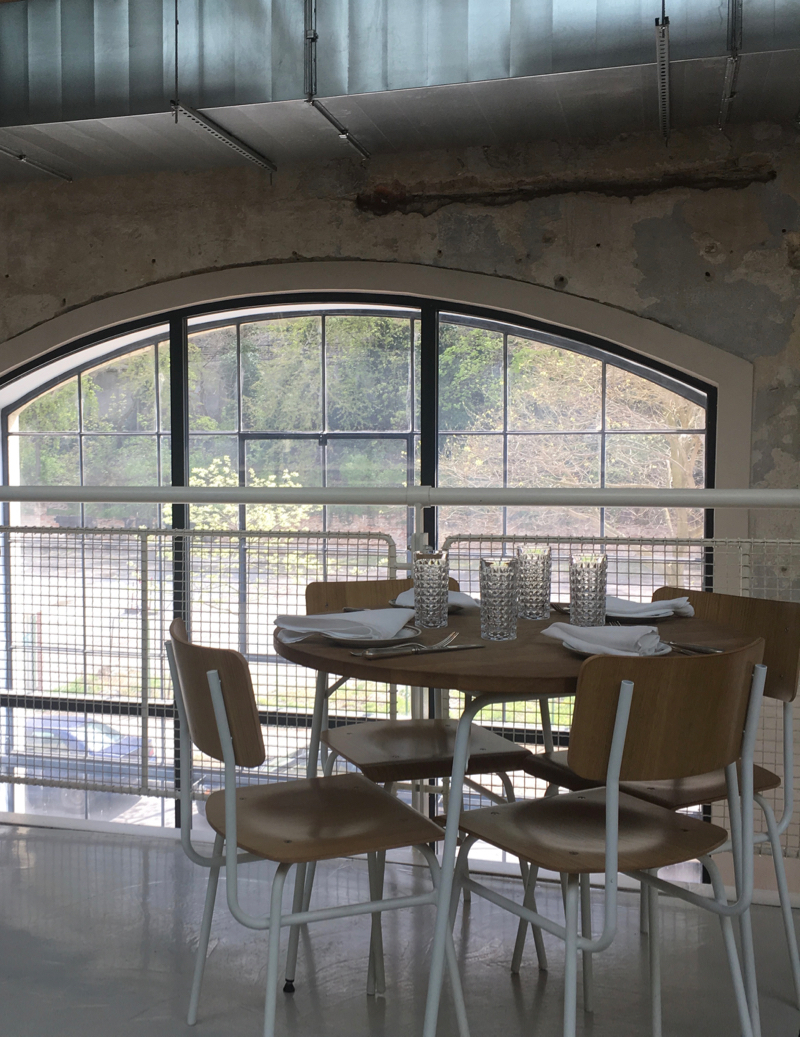 Save for salt, the landlocked country can pursue the abundant, hyper-local, farmers produce from the Czech rivers, meadows and hillsides. You won’t find mangos, seafood and other for the Czechs exotic ingredients on the menu at Eska. Rotating seasonally, the menu follows the sun, the moon and the thermometer. Residing in Central Europe makes winter more challenging so veggies are pickled, dairy is fermented and fruit is transformed into jams and marmalades. The marmalades appear in the Baker’s breakfast and other Eska breakfast sets. This is creative Czech cuisine on steroids, but also for this reason“if you are gluten or lactose intolerant do not come here”, warned the open-minded waiter during my recent meal at Eska.
I came for brunch, dinner and to get some bread, Czech made chocolates and fresh dairy. The butter, beaten steadily into its sticky, dense and fatty form directly on the premises, is excellent. 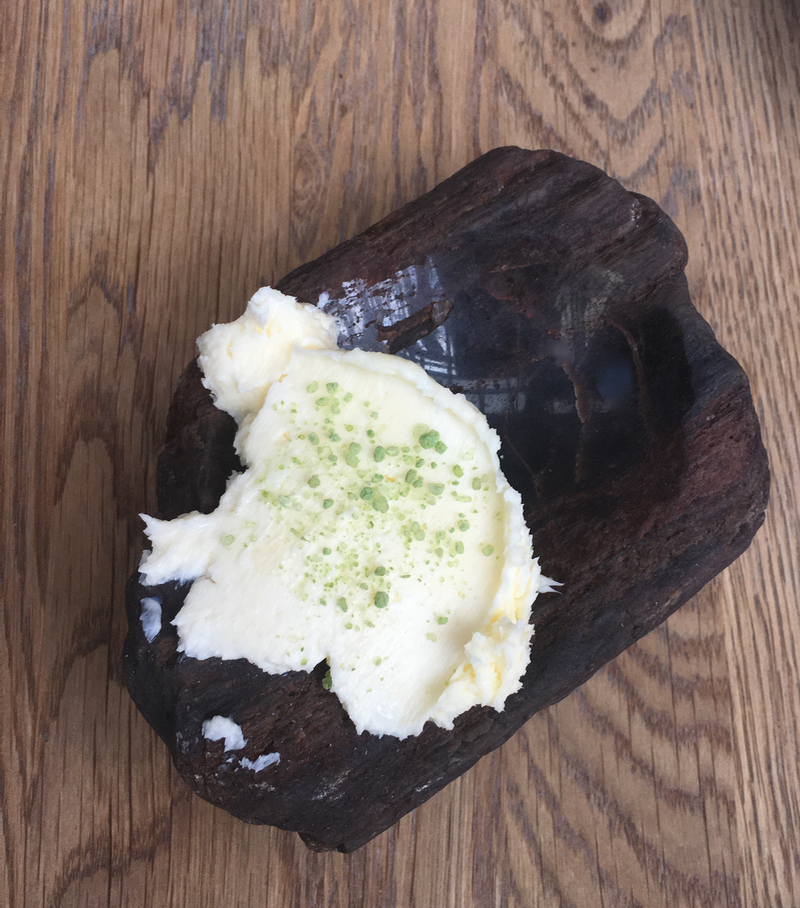 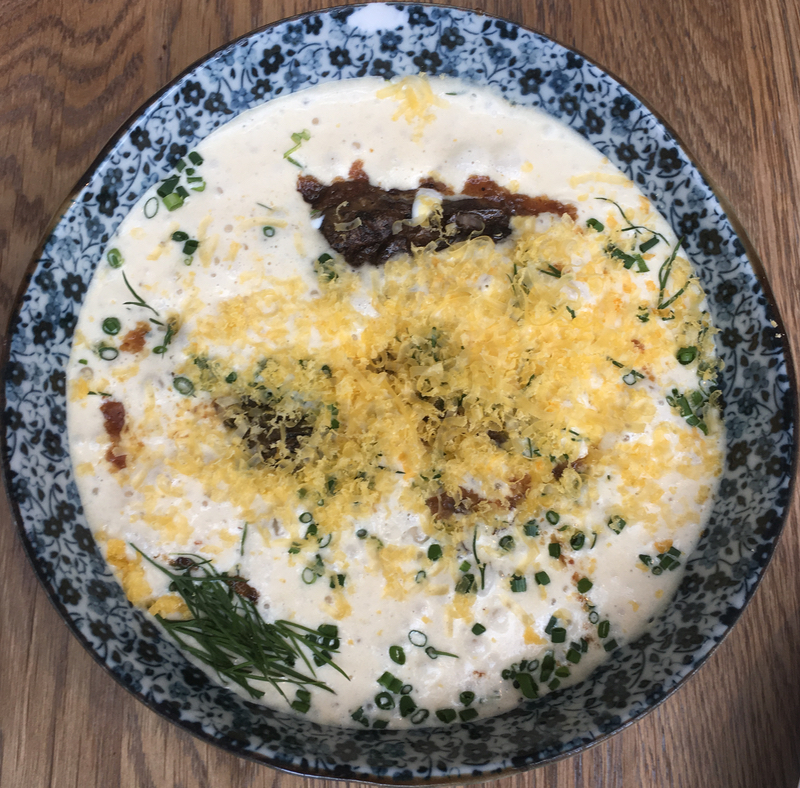 From the beech wood-fired oven come two types of organic sourdough that you can buy to enjoy at home or nibble on while indulging in one of the seasonal plates at Eska. The head baker Aleš Karpíšek lets the loafs rest for at least 14 hours prior to baking, and his sourdough slow-grower is beloved so much in the Czech capital that some casual eateries and wine bars sell or serve his bread. Moist, with some holes in the centre and a crunchy chewy crust are its signature traits.
The chef Martin Štangl had evolved his naturalist Czech cuisine philosophy during nine years as a sous chef at the Michelin stared La Degustation Bohême Bourgeoise. At Eska, he serves more generous portions and also more approachable, simple fare. Still, common Czech food is “transformed beyond recognition” as most plates are masked by a veil of delicious mystery. Like the signature Potatoes in ash, smoked fish, dried egg yolk, kefir. The creamy kefir and grated egg yolk (California chefs like Jeremy Fox like using it too) entirely cover the baked potatoes that nest in an indigo patterned Japanese style bowl. Generous, yet easily digestible vegetarian main course, that will sate almost any hungry eater. More bread satisfies the huge appetite.

While supporting sustainability, filtered tap water is served, but charged for, which I find ridiculous. Like in Northern America and increasingly in contemporary trendy restaurants in Europe now root to leaf, the waste-reducing use of vegetables haloes on the menu at Eska. Potato skins, carrot tips, fennel fronds, all pop in the plates.
Also, nose-to-tail eating supporter, Amaso supplies the meat including the traditional Czech breakfast sausages (párky). You can buy the Frankfurters, a blend of beef and pork meat in a long slim sausage at Naše maso, the most popular butcher in the city. At Eska the sausages are served simply and traditionally with homemade mustard, horseradish and bread. Naše Maso like Eska, La Degustation Bohême Bourgeoise, Bokovka wine bar, Café Savoy, and many other well-known food and wine hotspots are owned by Ambiente, the most significant player in the restaurant business in Prague.
Another breakfast and brunch favourite is the Omelette with either spinach, cheese, ham or mushrooms. Perhaps the best omelette in Prague, it is also the priciest (when omitting the five-star hotels breakfasts).
Stalking the menu online will only give you a hint of what to expect since some dishes change with the chef’s mood and the daily availability of the ingredients. My recent brunch involved the bold Carrots cooked in hay with mustard ice cream and brown butter, and the superb Steamed smoked catfish. This locally caught river fish rarely appears on the Czech menus since it is a noble fish scarce in the country. Perfectly smoked, the fragrant loin with pickled red beets was snowed in the green lettuce cap seasoned with the beet juice and dill. The staples on the modern menu that I found and tried in summer and also late in winter are the exquisite Potatoes in ash and a modernised popular vegetarian plate eaten by the Czech Christian families traditionally on Fridays, the Fermented red wheat, black trumpet mushrooms topped with runny egg. I had the hay carrots prepared differently with parsnips in fall, so ready yourself for little pleasant surprises.
Desserts run mostly on the Slavic nuances such as the Honey pie served with rum mousse or the Semolina pudding with apple and a healthy addition of sea buckthorn (rakytník). The current wave including vegetables in sweet defiles at restaurants sailed from the popular Dirt Candy in New York to Prague. White asparagus with sheep’s yogurt and crumble was on the menu in April, but I dared only to the classics such as the homemade sorbet with chocolate ice cream I enjoyed in summer. 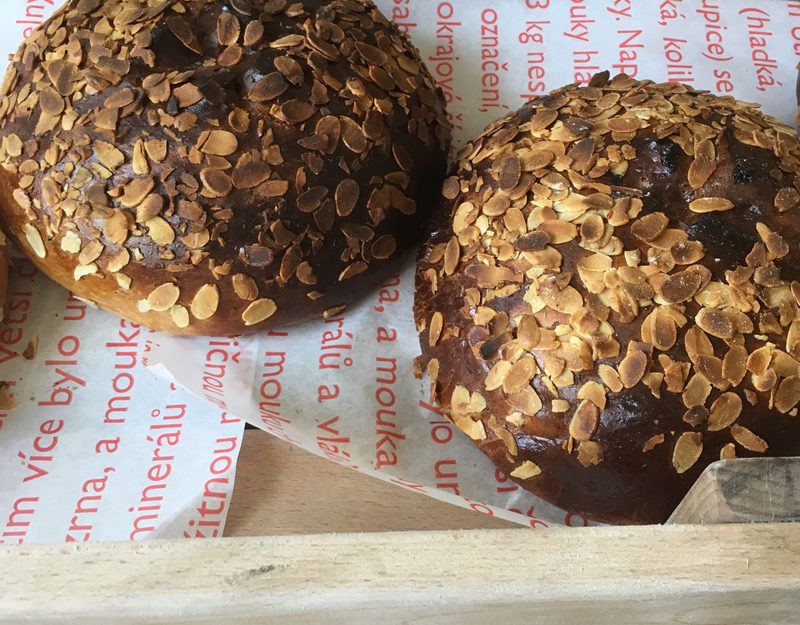 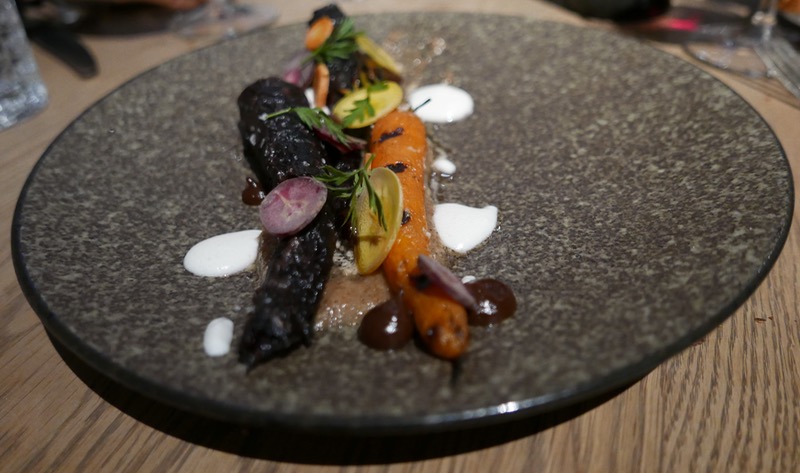 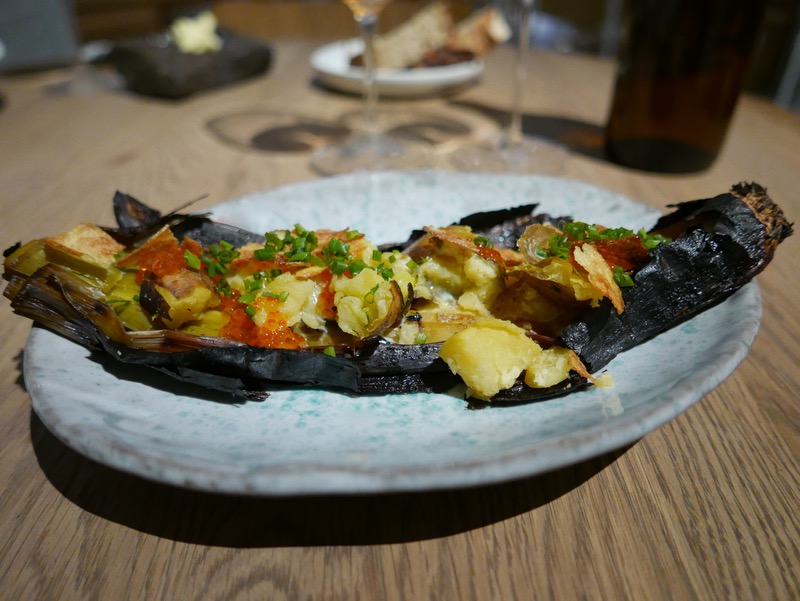 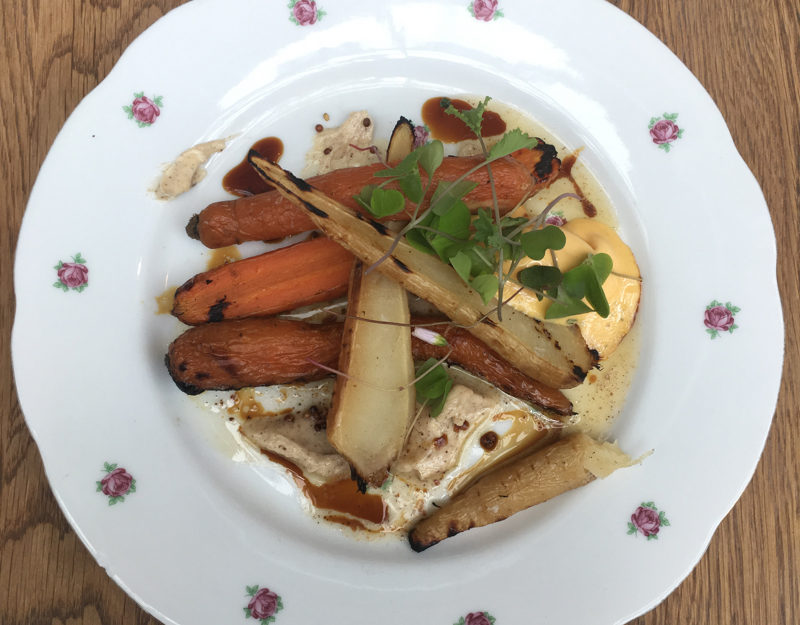 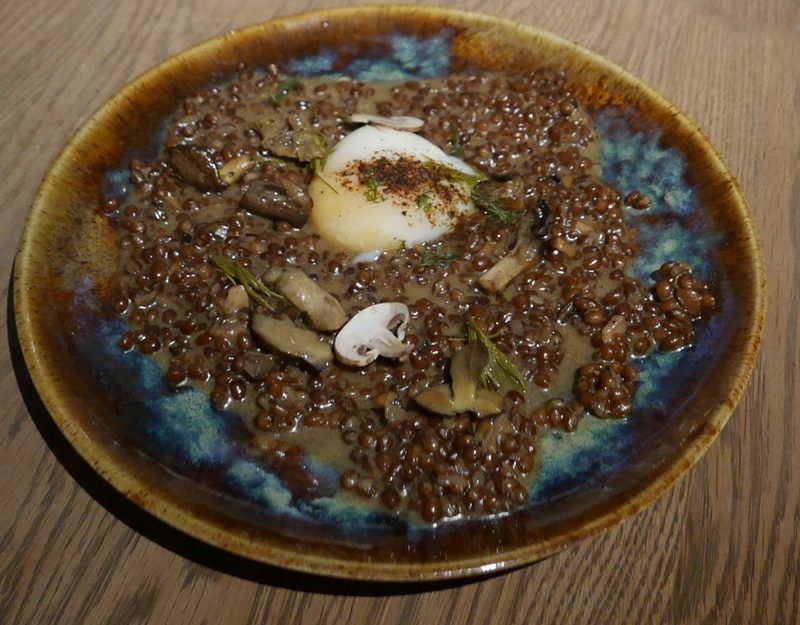 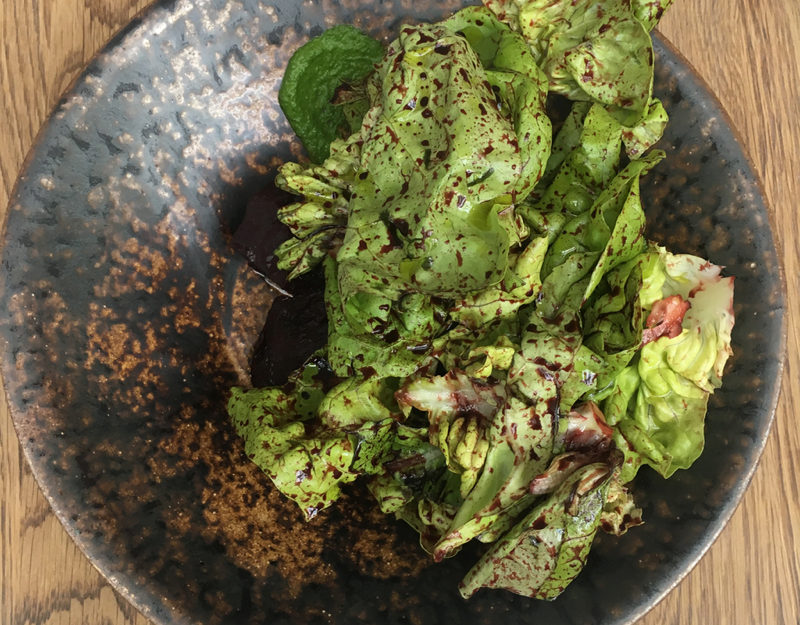 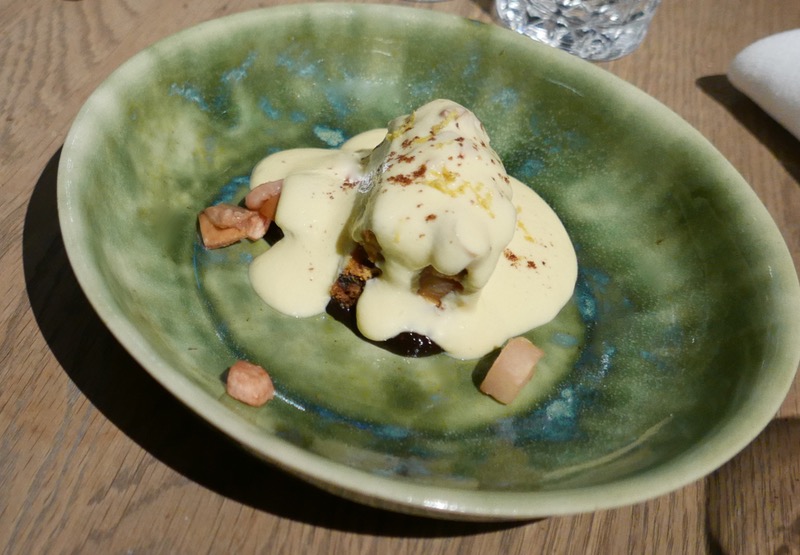 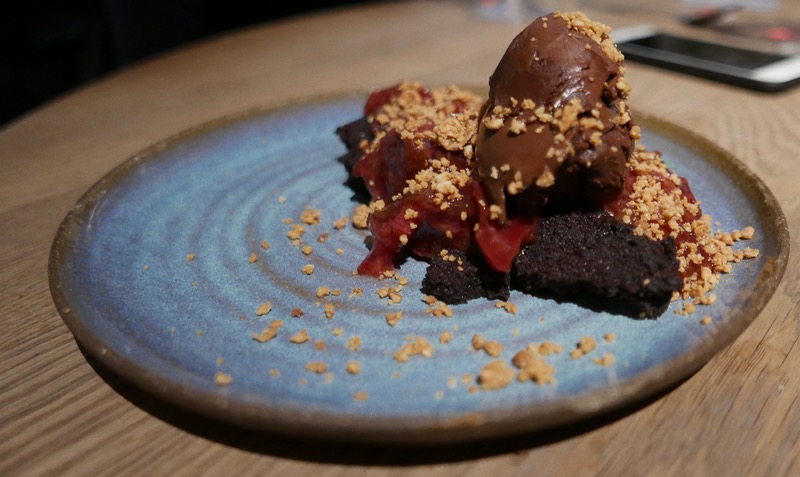 0
In the mood for adventure? Try it all in the eight-course tasting menu or order the menu of five dishes selected for you by the chef Karpíšek. Served one by one and can be placed in the middle of the table, so you could share them with your company. Either can be accompanied with beverage pairings. The drinks menu will teach you about fermentation. Did you know that not just wine and beer, but also bread, cheese, chocolate, pickles and yoghurt all involve the organic chemical reaction when sugar is converted into alcohol or the sour tasting acids? The happy bacteria thrive and your digestion has a blast.
When you flip the food menu, you learn that in Czechia, formerly the Czech Republic and even deeper in the history Czechoslovakia, the flour grade is decided by how much ash = inflammable material, remains after burning the flour. The higher the number on the flour sack, the more whole-grains remained, thus more minerals and fibre to nourish your body. Two types of wheat-rye sourdough bread are baked at Eska. The classic darker skinned 33 loaf with 33% of rye and some 7% of added boiled potatoes and “Vejražkový” 66 in which 66% of the flour is rye. The later is naturally lower in gluten than the classic Czech bread. Roasted local cumin is the staple ingredient in traditional Czech loafs. For a quick lunch or an office run off get the daily soup, open sandwiches, spreads or cold cuts at the café, also available to take-away. Although the bakery’s offer is not as complete as Joseph Bröt in Vienna, it remains authentic in its Czech core. 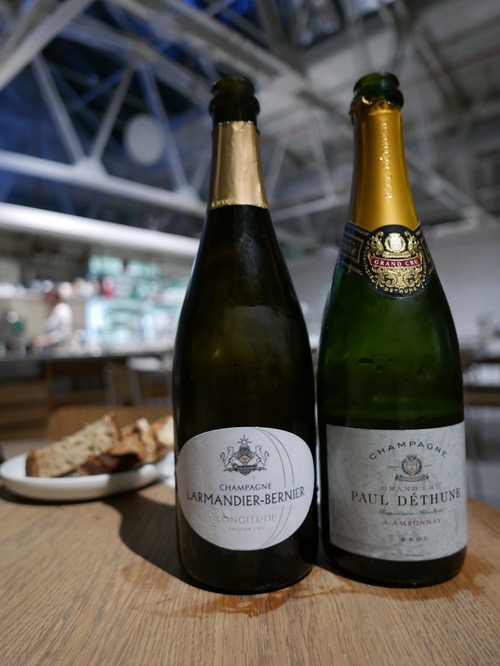 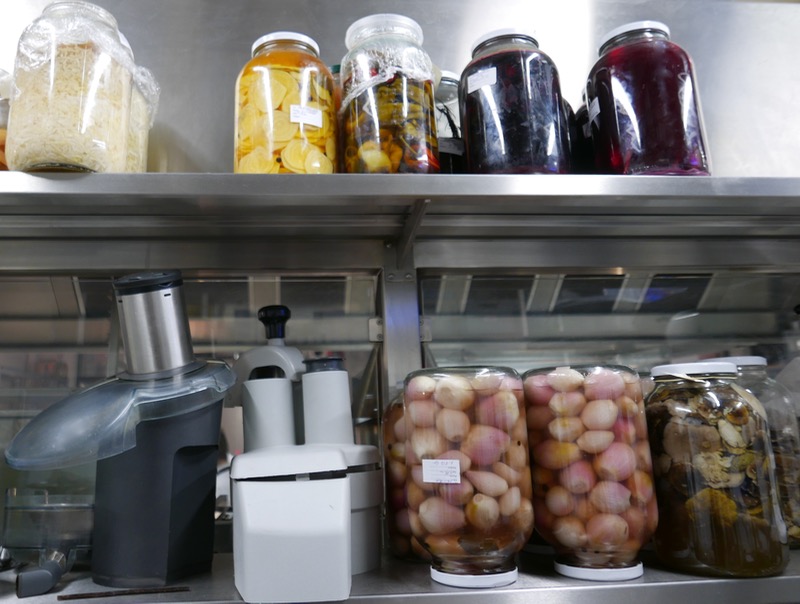 The concise yet constantly evolving, on natural wine focused wine list offers mostly Czech wines but also from the nearby European vineyards (Austria, Germany, Italy, and some French Champagne). best tea shop in central Europe by a mammoth leap, Tea Mountain supplies the green, oolong, white or black tea, depending on the season and choices of the barrister. At the counter café downstairs you can also buy locally roasted coffee beans from Doubleshot and Nordbeans. Supply your pantry with kefir grains to make your own lemonade (at Eska they make it with the cascara shells regularly, plus daily changing flavours), lovage-flavoured salt (sprinkled over the butter at the restaurant), Czech dairy, some vegetables, or indulge in typical Czech pastries such as the cream roll (kremrole) and during Easter the house “mazanec” almond coated breakfast loaf with raisins. Trained barristers prepare the perfect cup of coffee: drip, filtered, espresso, macchiato, cappuccino, flat white, the boozy Švejk´s coffee, chai latte spiked with the local spirit called Kontušovka, and other liquid temptations. Czech-made, superb quality organic chocolates by Ajala are also worth sinning. The cocoa was carefully roasted, ground by granite stone mill and of course “packed with love“. I felt the love in the 70% chocolate covered generously by a spiky carpet of crunchy cocoa nibs. Bokovka, the hip natural wine bar also offers the Ajala bars as well as the hot chocolate.
The towering workshop swing of a building is split openly into the bakery and café as you enter from the street and the main restaurant cum bar above. Well-travelled foodies may find the environment familiar. Swooped by the global design trend in dining – barring the walls, tables and the menus, while gushing with genuinely passionate emotions inhaled from the laid back service, Eska filled wholesomely the niche on the Prague’s constantly changing dining scene.
Pernerova 49, Prague 8 – Karlín
+420 731 140 884
Mon-Fri: 8am-11:30pm; Sat-Sun: 9am-11:30pm