In the West, I have never found anything near to the excellent complexity of the miso bought in Japan.

As one of the most important condiments in Japanese cuisine, miso is the pure embodiment of umami. What you taste in most of the commercially-made miso pastes, save for the processed powders, is far from the delectable nuances found in traditionally barrel-aged miso still found across Japan. I went in all directions in pursuing the truth about miso – tasted hundreds of brands, small-bath farmers market (San Francisco) attempts, made my own under the oversight of my Japanese friend, and visited a traditional artisan miso manufacture in Japan. What I found was disheartening. Even the organic shops often get it wrong, but worse many of the Japanese expats churning their micro-batches in San Francisco, Berlin et al. do not seem to grasp that the conditions are simply different from their native country, where the air in some regions is inoculated with the right constellation of bacteria, humidity and temperature, resulting in a better product. 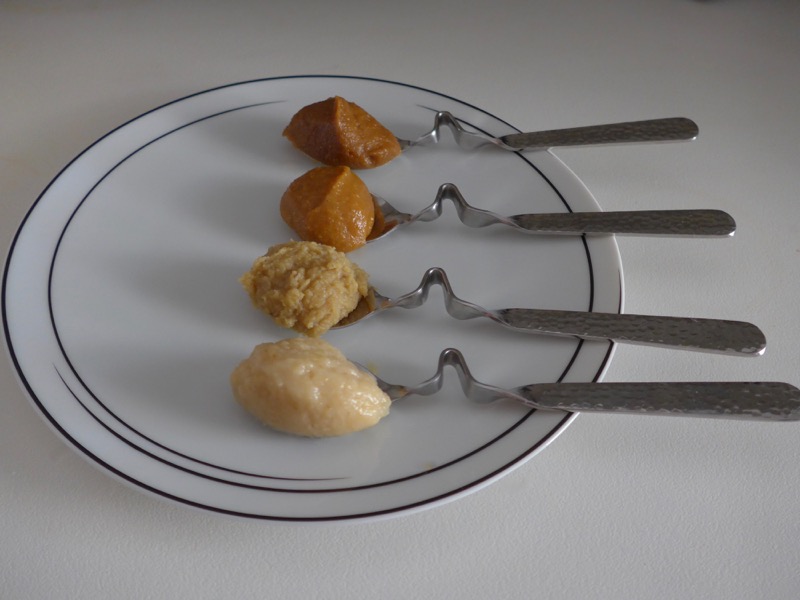 Miso is a fermented paste of soybeans and/or barley, rice, even chickpeas, with salt and koji spores. As you see on the photo above, there are different colours of the miso paste. The fresh, young, shiro miso ranges from a custardy light, through dulce de leche, rich caramel through dark brown. The later is slightly aged miso (about one year). The older it gets, the darker hues the dense paste acquires. Most common is between one and three years old, but in japan I tasted some 1o, even 50 years old miso (very mild and round, but not my favourite). Also known as brown or dark miso, the hatcho miso… With the millennial and local housewives inventiveness, miso can be further categorised by the main ingredient; the most traditional being made from soybeans, but at Japanese homes and now widely sold are other types of miso made from barley, rice, millet, chickpea (for the estrogen not affecting condiment). Each taste different. For sweet white miso, I am fond of millet, for dark, more aged miso, soy feels most complex. 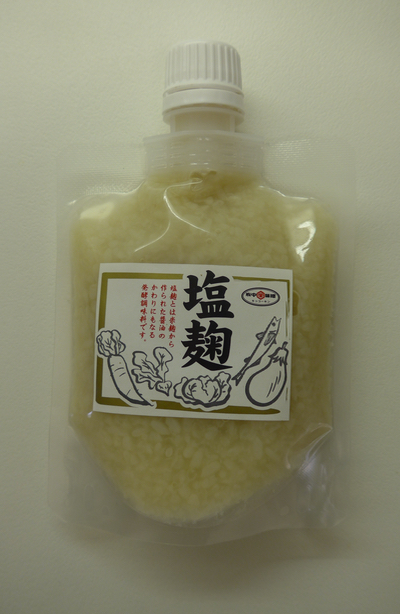 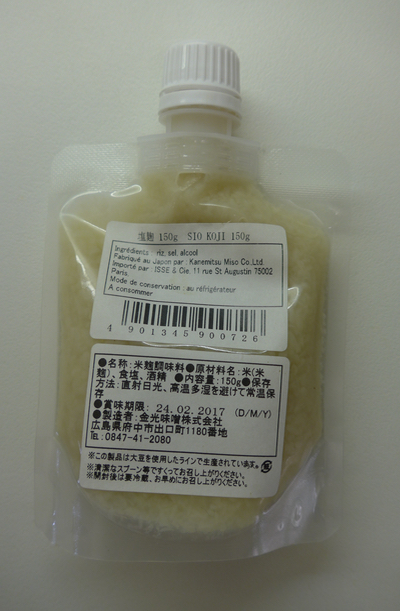 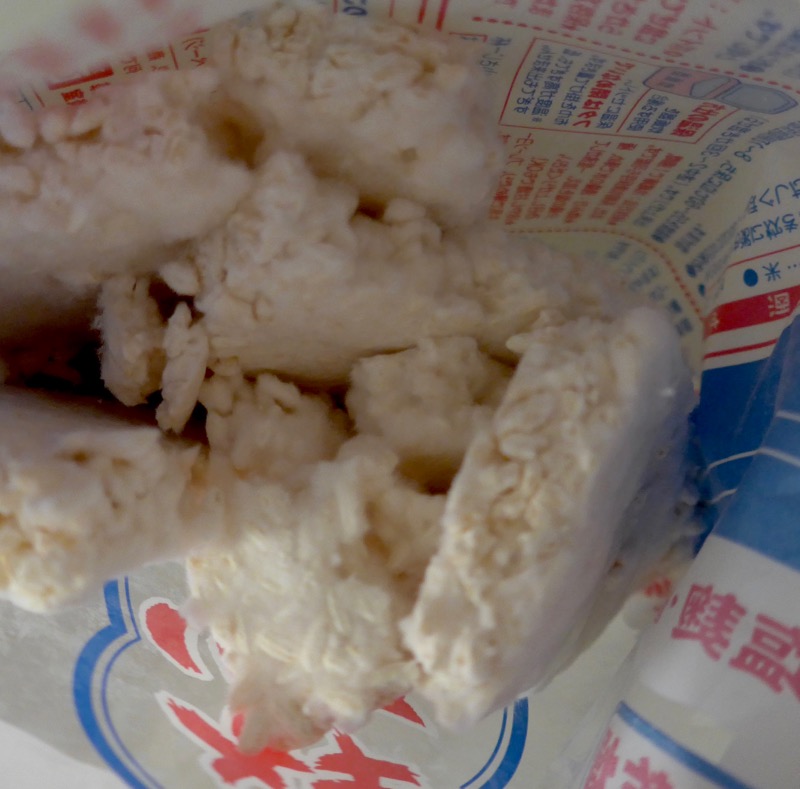 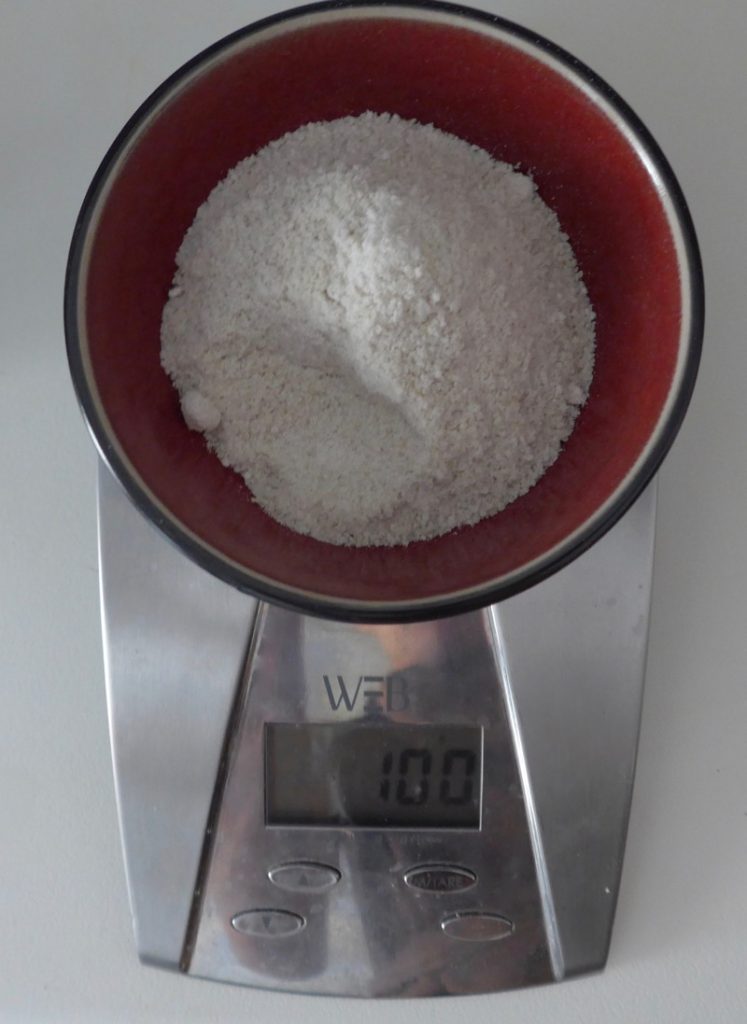 When making your own condiment the key is knowing what fermentation is. The conversion of carbohydrates to alcohols and CO2 or organic acids (acetic, lactic, …) through bacteria, yeast or fungi only happens under anaerobic conditions under not too cold, not too warm temperature (14-19degrees). No oxygen can enter your future miso, keep it in a stable temperature, sterilised glass container covered with a paper tissue weighed down by clean stones. Do not seal it yet as once you close and refrigerate it, the fermentation stops. Sacro sanct is to keep it sterile, no unwanted bacteria should enter the jar, otherwise you will get mould. Nevertheless, if mould appears only on the surface skim it with sterilised spoon, and keep the fermentation going. Your nose is a reliable guide, if it smells pleasantly sweet it’s all right, if it seems off, mushroomy, toss it away.
Since I could not easily buy chickpea miso in Europe and shipping it from Asia or the US would cost too much, my curiosity kept knocking. Further, ceci, also known as garbanzo bean is common in the Mediterranean region I live. I persuaded my Monaco culinary troupe to make this soy-free, umami-dense condiment at my apartment. I was lucky to have a Japanese food expert at hand, who has questioned her grandmother on the miso affairs. Our efforts were premediated by her savoire-faire. First, we cooked the chickpeas in a pot of filtered water, strained, we ground them into a rough, grainy texture. Then, in a wooden bowl, we mixed it with sea salt and the traditional fermenting culture used also in making sake. 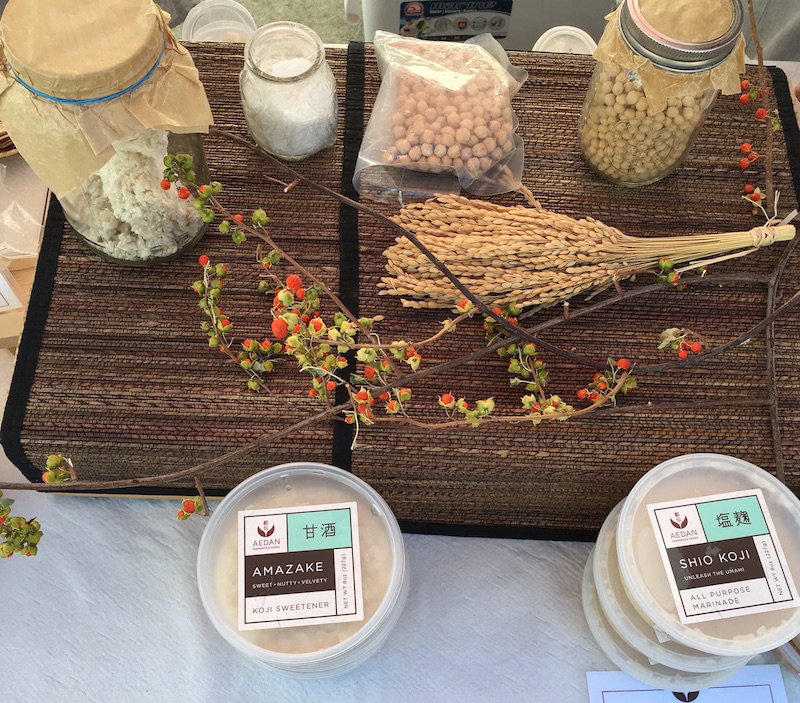 This starter culture for making miso is koji, a rice ferment (like kombucha contains some alcohol) that you can either cook at home, but easier is to buy it. We had a dry koji that our friend brought from Japan, but I also scouted for its pureed shio koji version in Paris. In Europe, there are now abundant sources of koji. At Japanese groceries of Paris and London, health shops in Prague to Berlin-based Mimi Ferments that are all about Japanese condiments (they even make pickled beetroot miso to spread over crackers). The longest expiration have the dried into bricks that you simply break and soak in little filtered water prior to its use. The ready to use, semi-liquid form is ideal for making amazake, the lightly-fermented sweet rice dessert popular beyond Japan. San Francisco’s AEDAN makes superb amazake.
When making miso at home you have to accept that “each batch will be different, so do not expect to make the same product twice”, writes Dunja Gulin, a fermentation expert and the author of Fermented foods for vitality & health. “Culturing isn’t uniform, accept the unpredictability of it and appreciate it.” 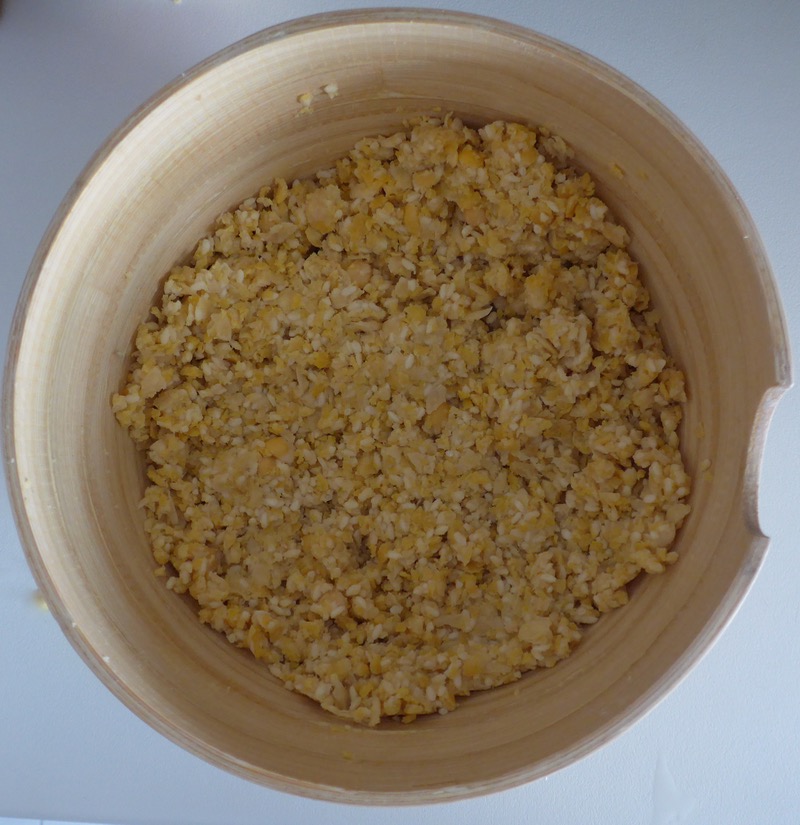 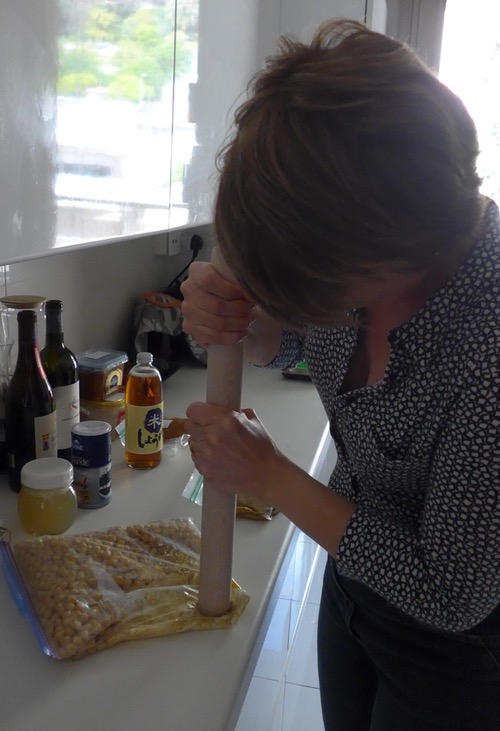 How was miso made traditionally in Japan

In Japan I visited generations-old traditional miso factory and admired how consistently they produce something so reliant on bacteria. The constant climate, using the same wooden vats for centuries at some traditional manufactures, helps to create a site-specific miso paste. This is why not just a type of miso, its age, but the producer make a significant difference in the taste of the resulting product. During the warmer summer months fermentation speeds up, therefore the mountain regions of the Japanese Alps of the Nagano prefecture are better protected from heat spikes that could affect traditionally made miso.
The miso manufactory in a lovely spring town of Matsumoto in the Nagano prefecture was a medium scale operation. Attached was a modern plant, but the giant wooden vats, over hundred years old, were still used in their high-end, aged miso products. Unlike with whisky or some, mainly red wine, there is not interest in imparting any wooden flavour into the fermenting product. Still, the Japanese believe that in this way aged miso paste tastes superior to mass-made factory miso sold at supermarkets. In the West, I have never found anything near to the excellent complexity of the miso bought in Japan.
After our tour, we got a bento lunch consisting of all-miso flavoured dishes. From miso pickles, through soup, tofu, miso dressed vegetables, to my favourite, a white miso ice cream. As with cheese gelato, you might feel repelled at first, but sweet miso pairs wonderfully with milk and yolks. 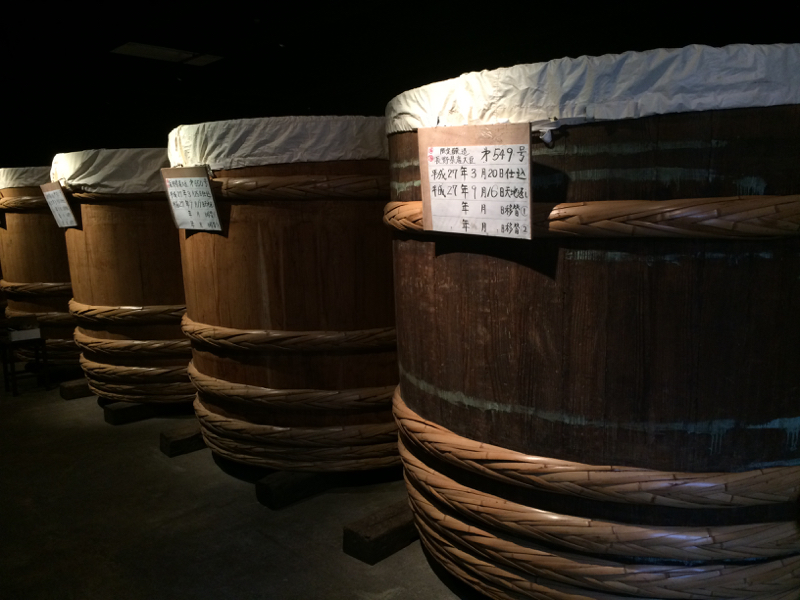 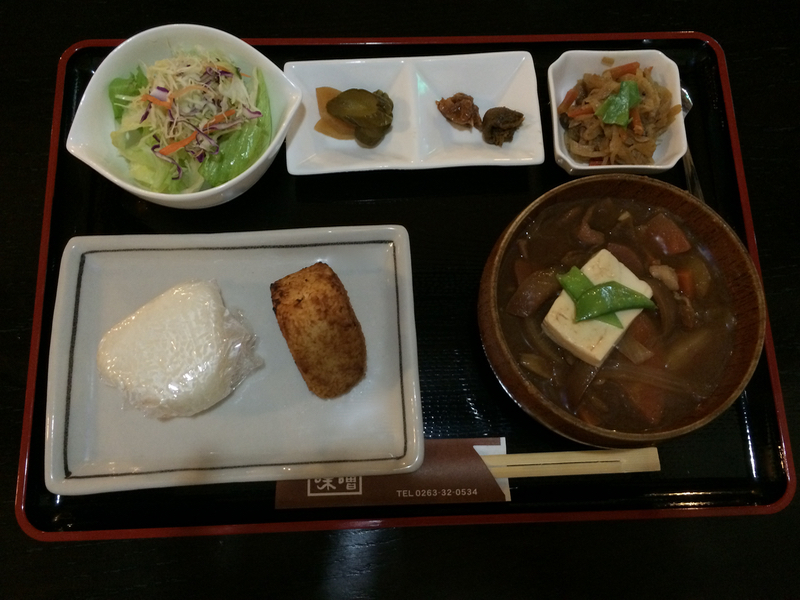 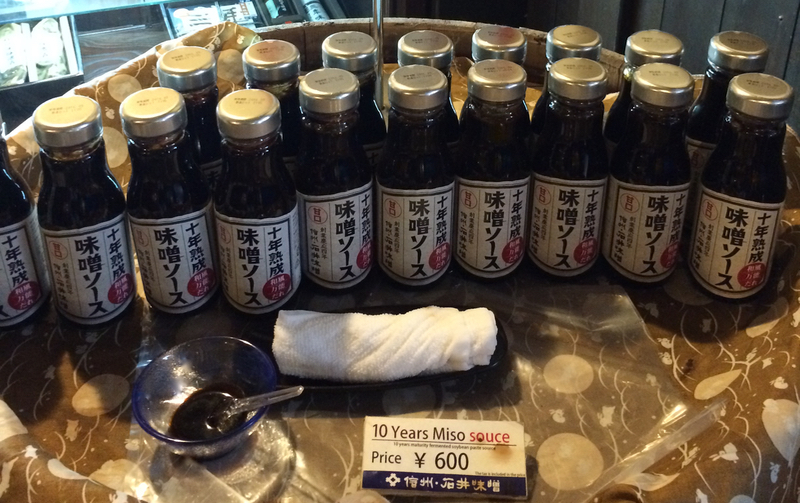 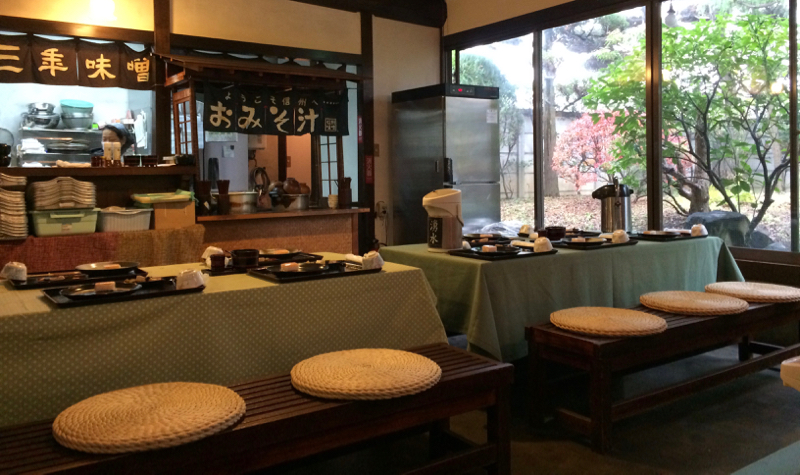 The uses of miso are extremely variable

Miso soup (shiru) and sushi are perhaps the most globally known Japanese dishes. The soup is served at breakfast, with bento lunch, and in a multi-course dinner. Japanese, perhaps, consume more miso soup than green tea. Convenience entered into the miso world, introducing dehydrated cubes and powdered instant soups, but these will never have the fresh richness of a real, miso paste based soup. A spoonful is enough for a small bowl, add some wakame seaweed, cubes of plain tofu, scallions, perhaps a sprinkle of ground sesame (goma) and savour the bomb of umami in full slurps.
Other gastronomic treats from miso include pickles, in Kyoto the mildly sweet Saikyo miso paste is flavoured with yuzu, ideal with turnips, grapes and fresh figs also embrace its umami. 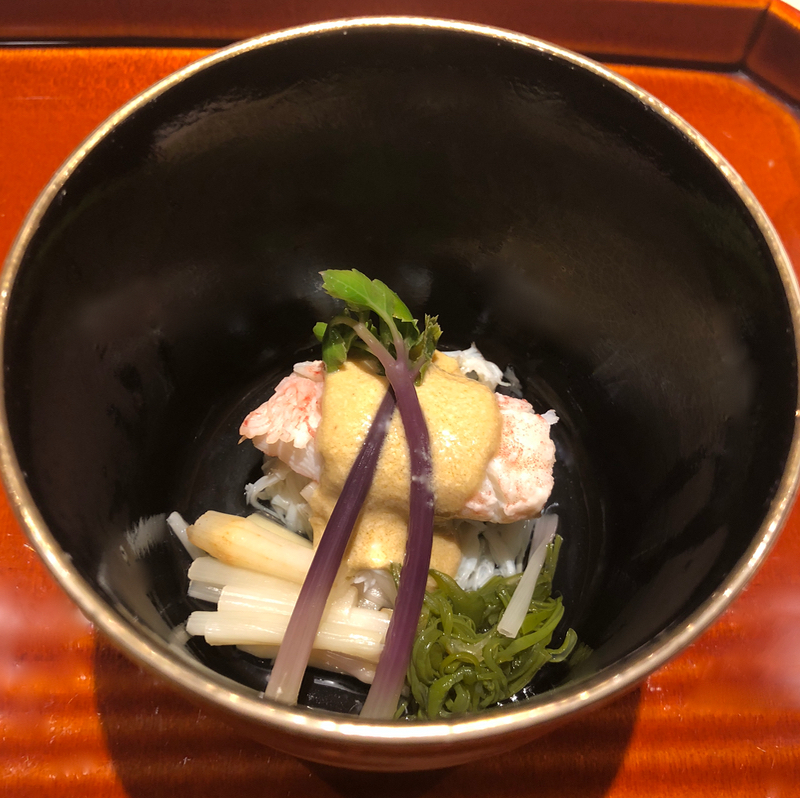 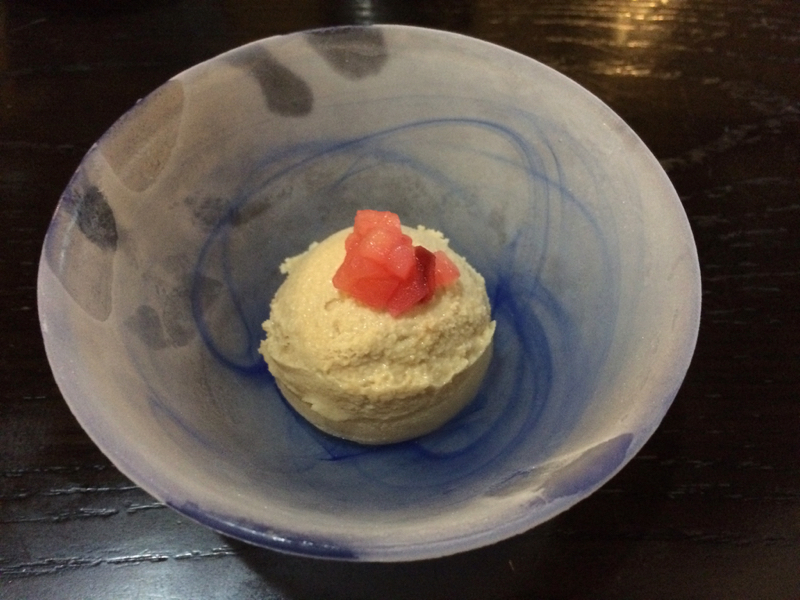 Nobu uses his powerful dry miso granules to season raw fish, salads, noodles, but I use t on whatever is at hand when too tired to cook anything too complicated. Over grilled fish, soup, steamed rice, asparagus. His black cod baked in hoba leaf with miso is very popular, but you can grill tofu with miso for a generous vegan dish. Kyoto’s third generation three Michelin kaiseki chef Yoshihiro Murata includes particularly white miso paste in many of his seasonal, simple recipes. His broiled tofu with miso paste and the pungent kinome (pepper leaf buds) is one of my favourite skewered spring dishes. For a luxurious treat he grills spiny lobster with a citrus touch of yuzu.
Beyond its savoury profile, desserts embrace the sweet white Saikyo miso umami power with a delectable grace. Some gastronomic kaiseki restaurants (Kikunoi, Beniya Mukayu) serve a superior sweet miso ice cream. Abroad I indulged in miso cookies baked by Lodge Bread in Culver City, California. 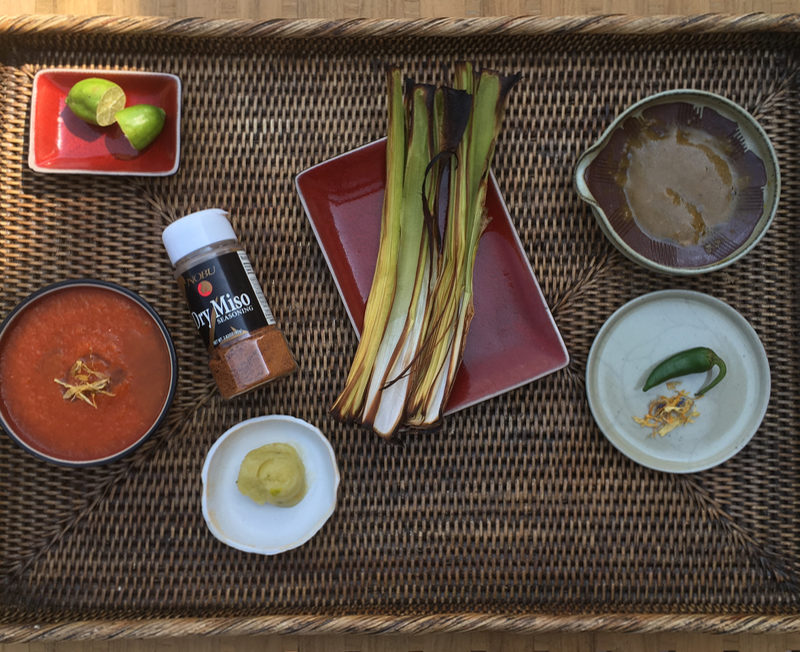 Generally, fermented foods are viewed as healthy. The transformation of sugars into alcohols (beer, wine, …) and CO2 (sourdough) or acids (lactic – pickles, acetic – vinegar) changes the foods nutritional value, improves digestibility and preserves it from the bad bacteria growth. The later was the main purpose of fermentation in pre-refrigeration era. By breaking down complex carbs into more simple molecules, its high protein (about 14%) and salt (5-12%) content have been praised in traditional diet. Fibre, calcium and sodium are also nutritionally significant but not as high s it its whole-soybean sister – tempeh. Soy protein is beneficial for postmenopausal women as it appears to slow down bone loss. The phytonutrients in soy are flavonoids that have generally been (as in wine) associated with healthy heart. The bacteria and enzymes in miso improve digestion of other foods eaten with it.
Miso is not purely Japanese invention. In A Dictionary of Japanese Food, Richard Hosking writes: “Its prototype came to Japan from the Asian mainland sometime between the sixth and seventh centuries.” During the Yamato State formative years the Chinese influence on Japanese culture was vehement. After all, so much of our food today crossed borders and was transformed by local cultures into something slightly different. By making your own miso you are creating a new culture, a new locally-specific recipe of this eastern condiment, that became a staple in my fridge.