Alexis Gauthier was the first Michelin chef serving fine vegan tasting menu in London. At his restaurant Gauthier the French chef has offered by far the most sophisticated vegetarian plates in Soho for years, and caused an outrage when he put the calorie counts to his two tasting menus. Like the three Michelin stared Alain Passard, recently joined by Alain Ducasse in Paris, so far Alexis Gauthier has served the vegetable menu along with his omnivore gourmet dishes, so people with mixed diets can dine together while eating what they want.
Being diagnosed with fatty liver, a lifestyle change abound, his focus shifted from butter, cheese, foie gras and meat to using more plants in his cooking. A vegan himself, the former apprentice of Ducasse should not be confused with his namesake Alexandre Gauthier of the experimental La Grenouillere near Calais. Now in gastronomic terms, Gauthier is shaking the cosmopolitan London as much as the Brexit vote. The forward looking chef intends to embrace a totally plant-based menu soon. 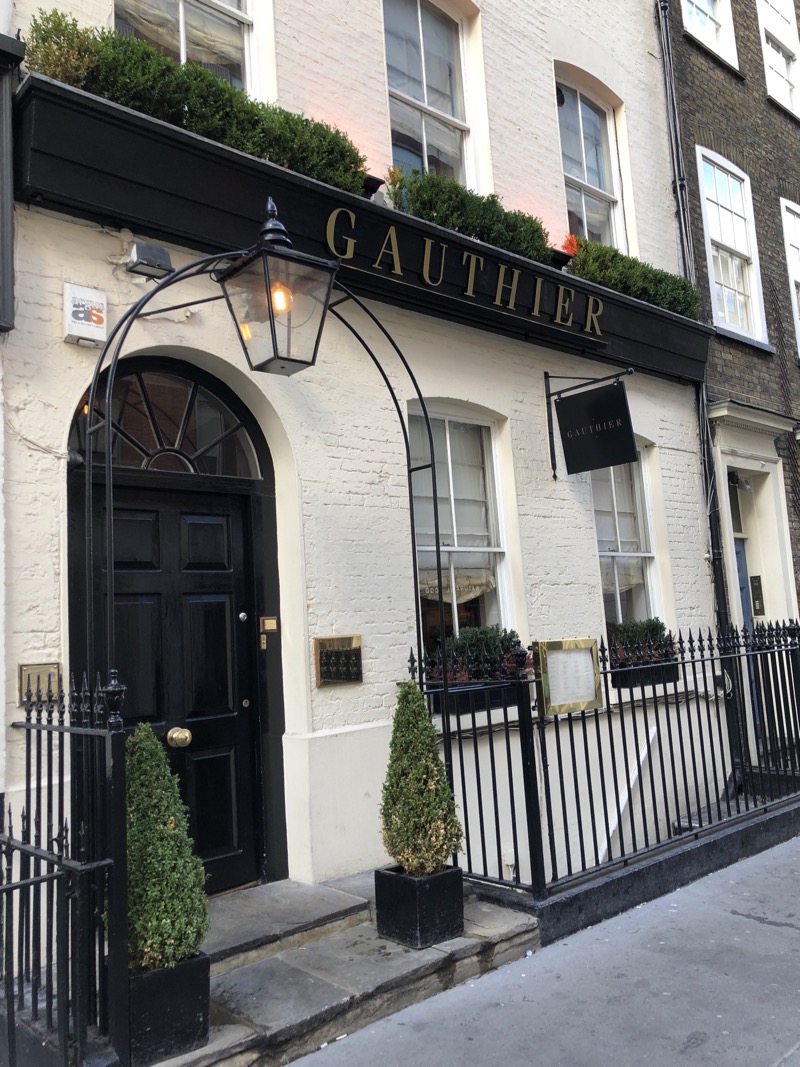 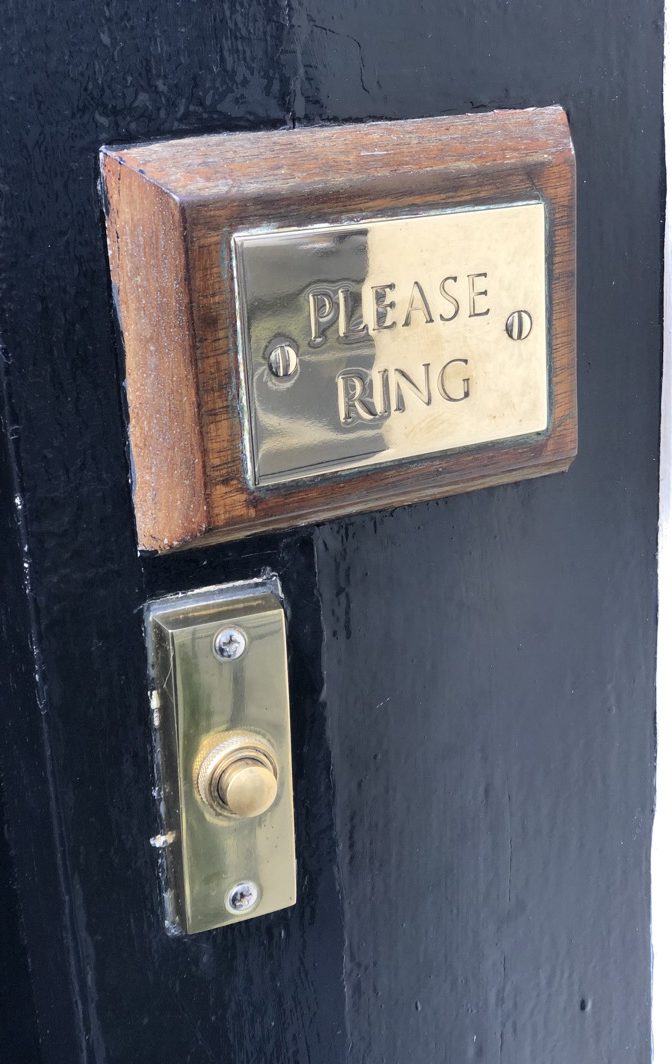 The animal rights fighting stars flock into his Georgian townhouse for a treat – Stella McCartney, Benedict Cumberbatch and the co-warrior Al Gore dined at Gauthier supportively. Approachable to all foodies, a vegetable-centric cookbook for non-vegetarians followed. The book, Vegetronic uses meat broths to infuse plants with rich flavours, but the restaurant has evolved from removing foie gras in 2015 to offering also Les Plantes vegan tasting daily. Sadly, his Michelin star was taken by the red guide. Probably a bad day when the inspector came, since our most recent meal was as intriguing as three years ago.
A rich vegan faux-foie gras and well-oiled toasts were served with both tasting menus at Gauthier recently. A disclosure, I’m an eco-conscious flexitarian, balancing off my animal-sourced consumption (mainly in dairy and seafood) with about half of my meals being plant-based. Gauthier in Soho caters to such flexible, but responsible indulgence. The chef rises our awareness. 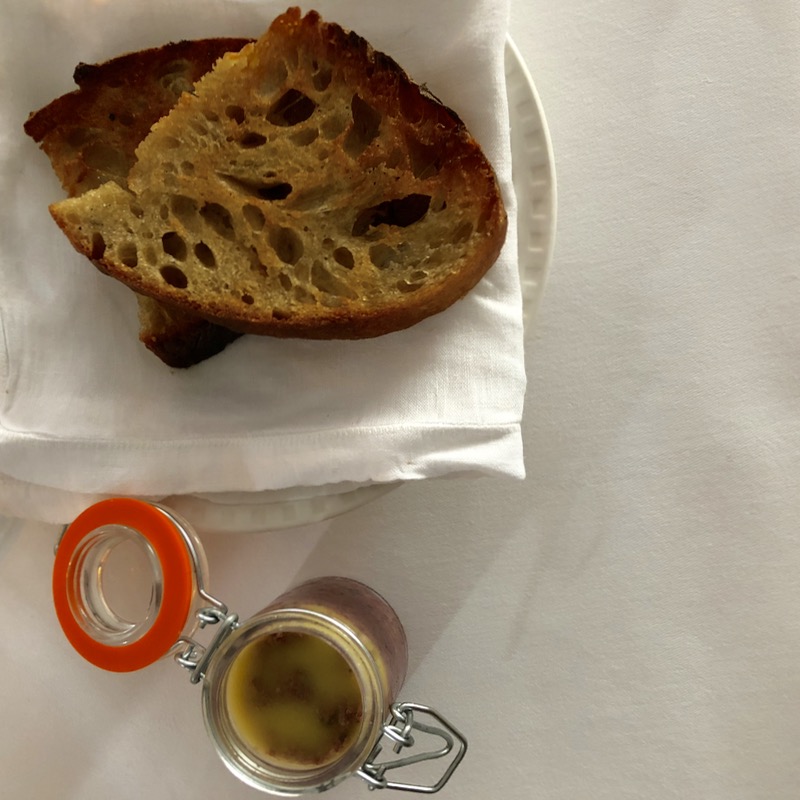 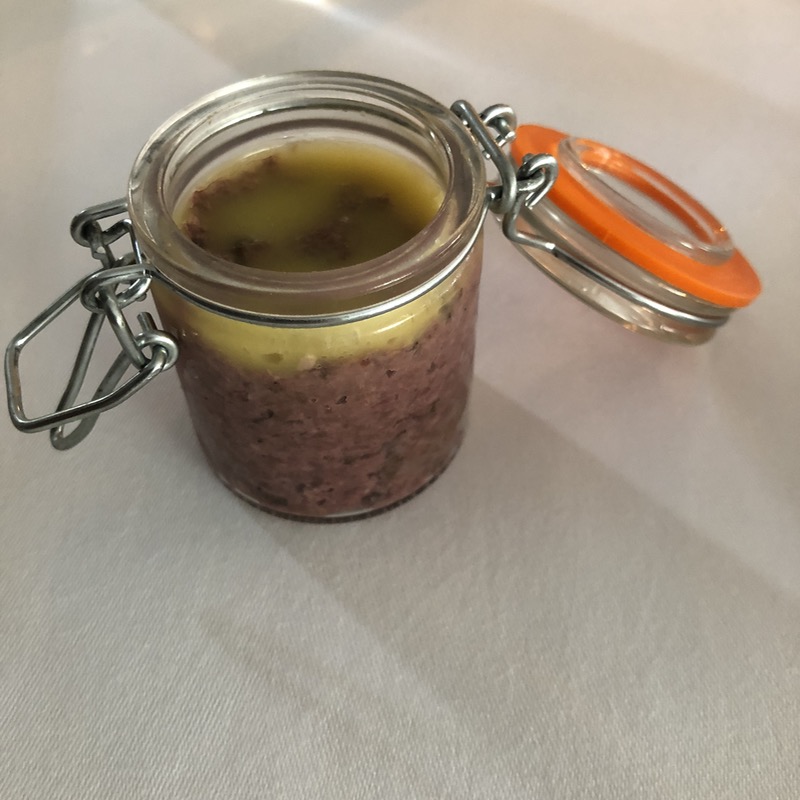 In an interview with Medium Gauthier said: “We have to start from the beginning — create new flavour combinations rather than recreate what we have been doing but with vegetables. For the next generation, I don’t want to sell them fake burgers — that’s is rubbish. Instead we must entice them with new combinations of flavours and ingredients.” Indeed, his food is more mature than at trendy vegan cafés, even at the best plant-based restaurants like Crossroads in Hollywood.

In June for lunch à la carte I chose three vegetarian courses. I was curious about how the vegetable king of London fares with the prince of late spring – the asparagus. A green garden of asparagus with peas, pea puree and a thick, flavourful chicken emulsion landed first. It could have less salt and the asparagus should had been a tiny bit less cooked, so I can see what Michelin had noted. I followed with Green and white asparagus in balsamic vinegar, sweet and a slightly acidic reduction, poached quail egg, hazelnuts and a black quinoa crisp, poured over with a smoked tea. An intriguing, complex plate at the level the Michelin stared vegetarian Tian in Vienna was then. 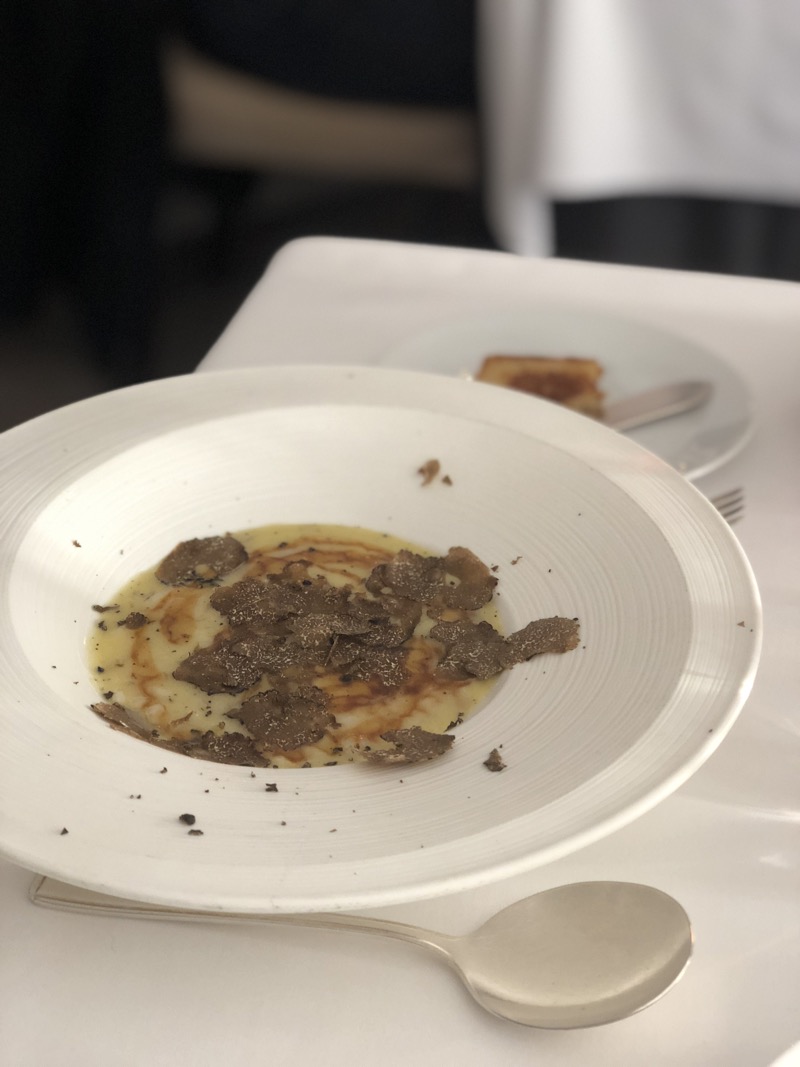 The main, truffled risotto was impeccable. A signature staple of the chef served already at his former London venue Le Rousillon that in fall includes the precious white truffle. The Italian Acquerello rice absorbed the stock into al-dente, a just amount of parmesan and generous flakes of the aromatic tuber aestivum were shaved over like a forest hat. A London-based critic, Andy Hayler reviewed the non-vegetarian cooking at Gauthier ever since its opening in 2009, so check his website for details. He agrees with me on the supremacy of the risotto over anything rice-bound served in London.
Returning this fall with a friend, she had the regular Goût du Jour without gluten – lobster tortellini, white truffle risotto, black halibut, deer, but no 70% chocolate mousse from the chef’s Louis XV. days. Instead, she had the naturally gluten-free chocolatey blackberry tartlet from the Les Plantes vegan tasting menu that I had. She pronounced the risotto her favourite plate. 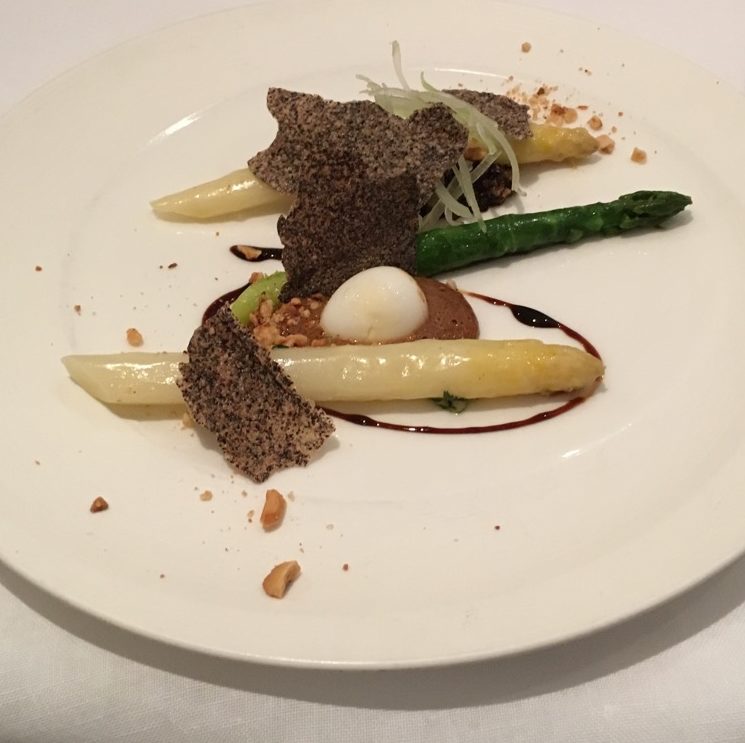 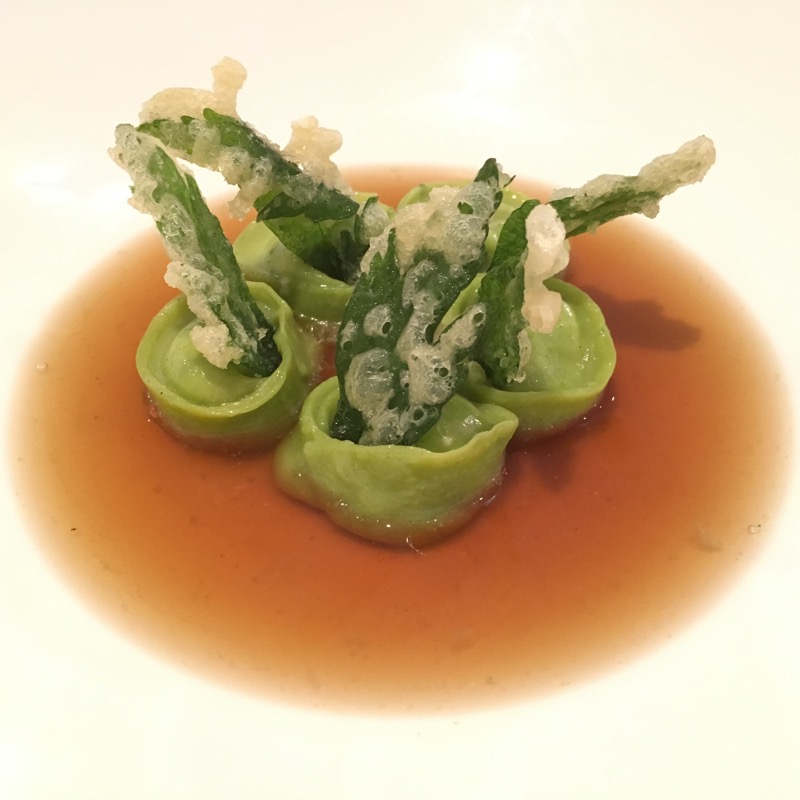 Replacing egg whites with  whipped chickpea water, using carrots in a tartare prepared at your table, the Plants menu sounded like a healthful millennial choice to me. A Deutz champagne was poured as an aperitif, instead I asked for a glass of red. The Franco – Italian wine list is generous, yet the sommelier offered a tight Loire Saumur Champigny. I longed for Burgundy so he pulled out a juicy Mercurey by Domaine Charton from his cellar. A cheaper alternative to other premium crus in the north-eastern French region.
Beware, the oversupply of superb house bread, butter and extra snacks and desserts can spoil your healthy resolve. The gluten-free option was reportedly excellent. You get the calories printed on the menu, but who counts the extras? Temptations. Gauthier, the former pastry chef at the three star Louis XV in Monaco, bakes a perfect plain baguette, sourdough, black olive, cumin and walnut roll, rosemary & olive focaccia, atop the superb parmesan crisps (not vegan). An artisan butter and canapés with creamy toppings come with the à la carte. 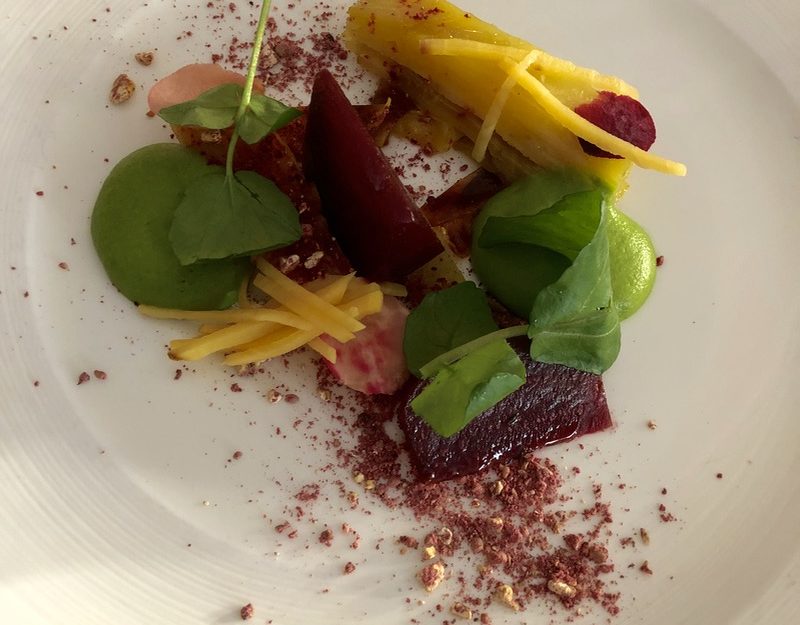 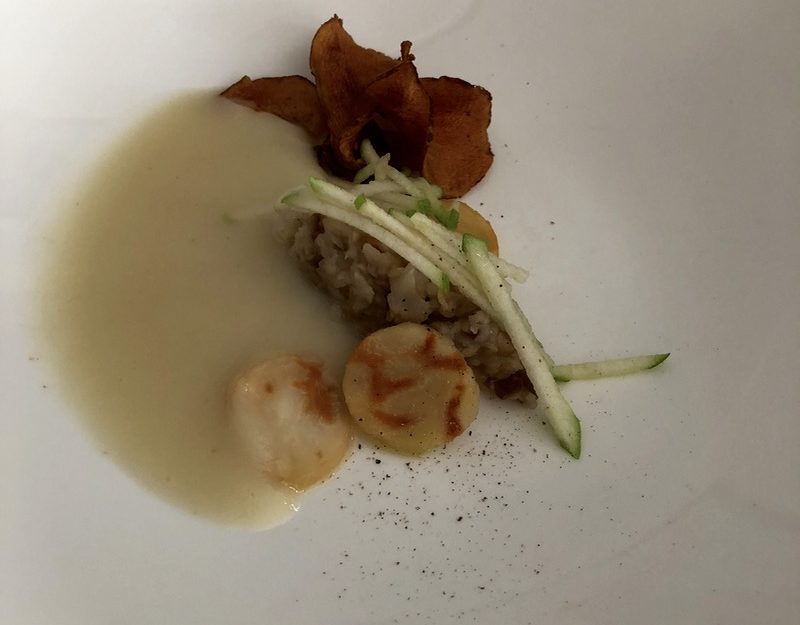 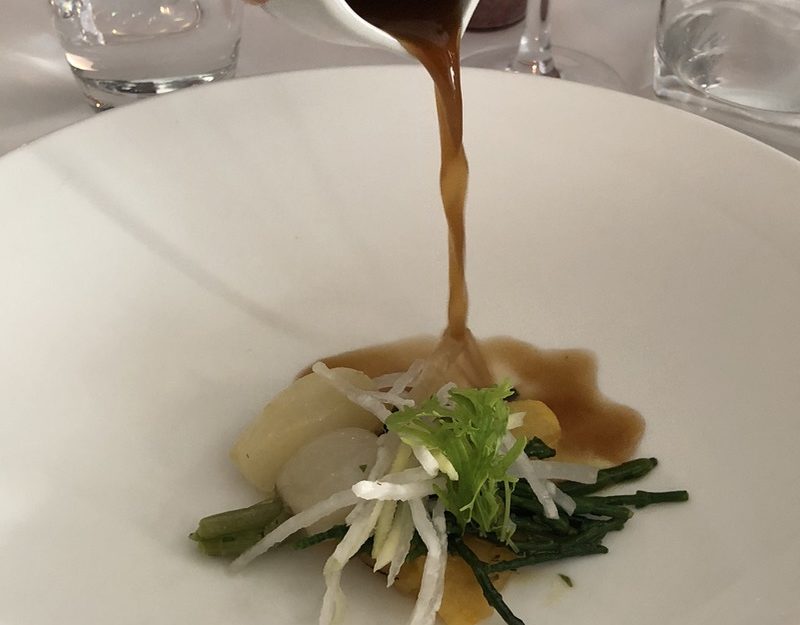 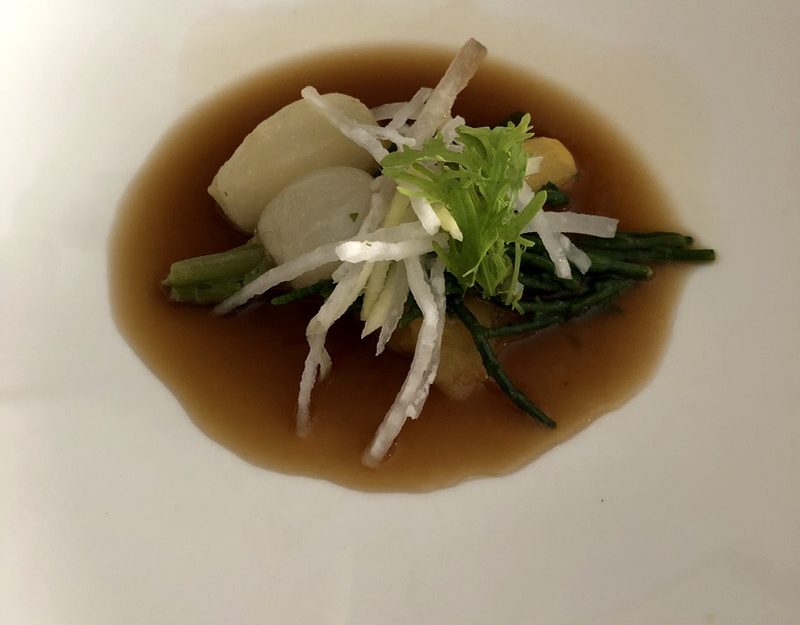 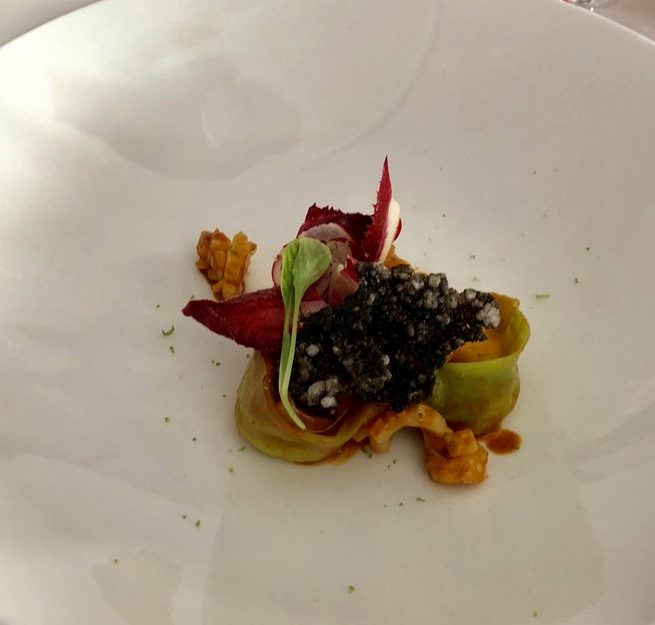 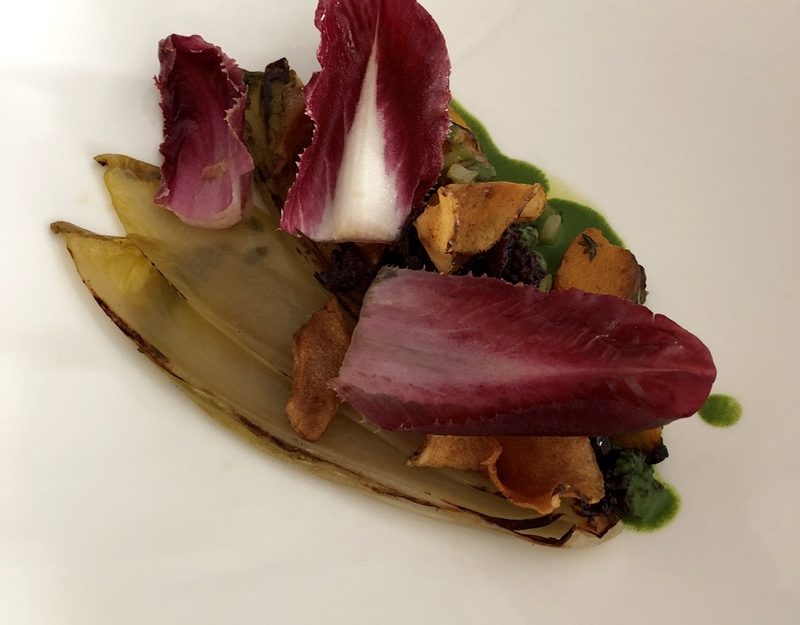 0
My vegan tasting starter with elegant, fall bounty heralding, Wild mushroom tortellini hidden under leafy greens. Just as our empty plates were cleared a waiter placed Miso caramelised Turnip and Quince in front of me, pouring a warm dashi broth over the Japan-inspired, locally sourced dish. A wholesome, fall, and soupy creation, my favourite plate. Celeriac and apple velouté followed. Quite subtle for a vegetable the Noma chef René Redzepi chose for his legendary plant shawarma in his summer, vegetables themed menu. The service was faster than our forks, which on a workday lunchtime is appreciated, but not on a weekend friendly encounter, so we rushed our last forkfuls to give space to the Heritage beetroot terrine for me. This was the most contemporary plating with powders and cured vegetables as the centre stage, good.
A dessert time landed on a red saucer with an inner applause. Ladies love their sweets. The Blackberry tartlet, chocolate ganache, and blackberry sorbet stroke the right balance between rich sweetness and refreshing berry sourness.
Unfortunately, they do not serve any more the small batch organic teas by Lalani & Co. Previously I enjoyed, an excellent vintage Indian white tips, but this time my dessert went dry. 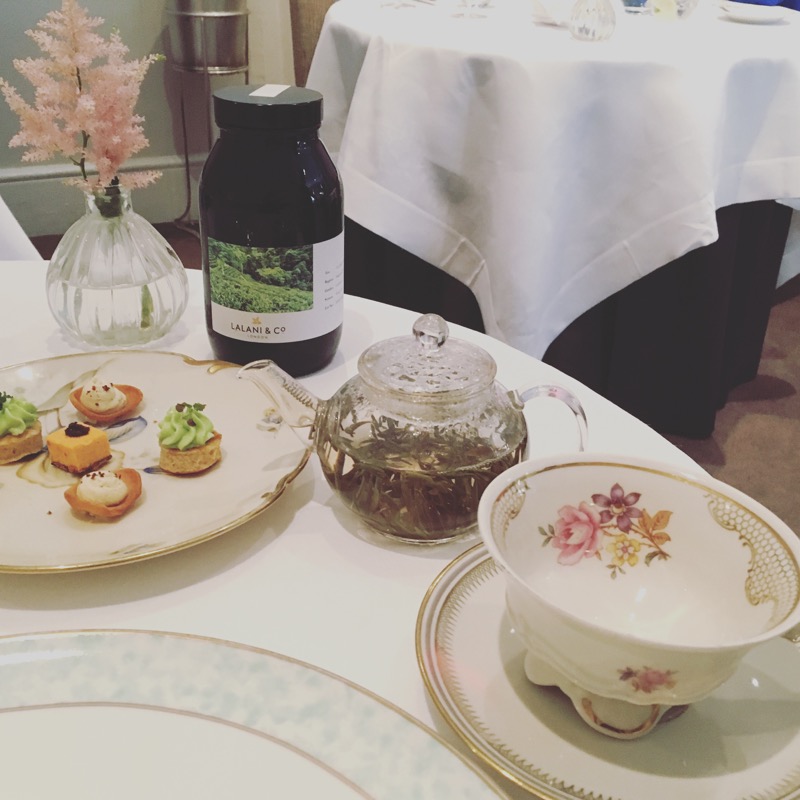 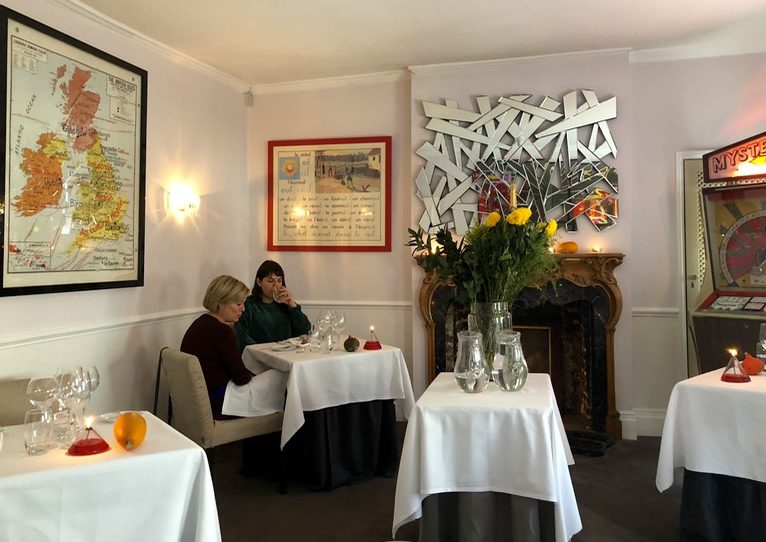 The house is charming and the three dining rooms exalt very different qualities. After ringing the doorbell, climbing up the narrow staircase your grasp that Gauthier is not a barrier-free restaurant. I prefer the cosy English living room feel of the first floor, while a quirky vintage game and contemporary art halo the dining room above. The top floor is for private meals. The Soho townhouse feels somewhat clumsy, but the white-clad tables, seasonal vegetables replacing flowers and an oil lamp capture the Arpège country style.Dining at Gauthier feels like visiting a friend who cooks well. A heritage fire place on each floor was left over from the previous tenants feels homey. Escaping the chaos of Central London, the previous owners smartly left the house over to a more sociable venue. Gather with friends and savour the seasons through the fine, vegetable-centric food.
+44 20 7494 3111