The reflections on the limestone are art in themselves. Transforming with the day, dying with night's darkness.

I reached the Silvacane Abbey on the spur of aesthetic and spiritual curiosity. After being intrigued by the island monks habitat on an island in the Mediterranean this summer, I craved more calm yet humanist spaces on my travel schedule. On the low season brink of winter and spring the journey’s reward was a peaceful visit. We literally opened the massive gate into the church, what followed was a pure bliss for the soul. 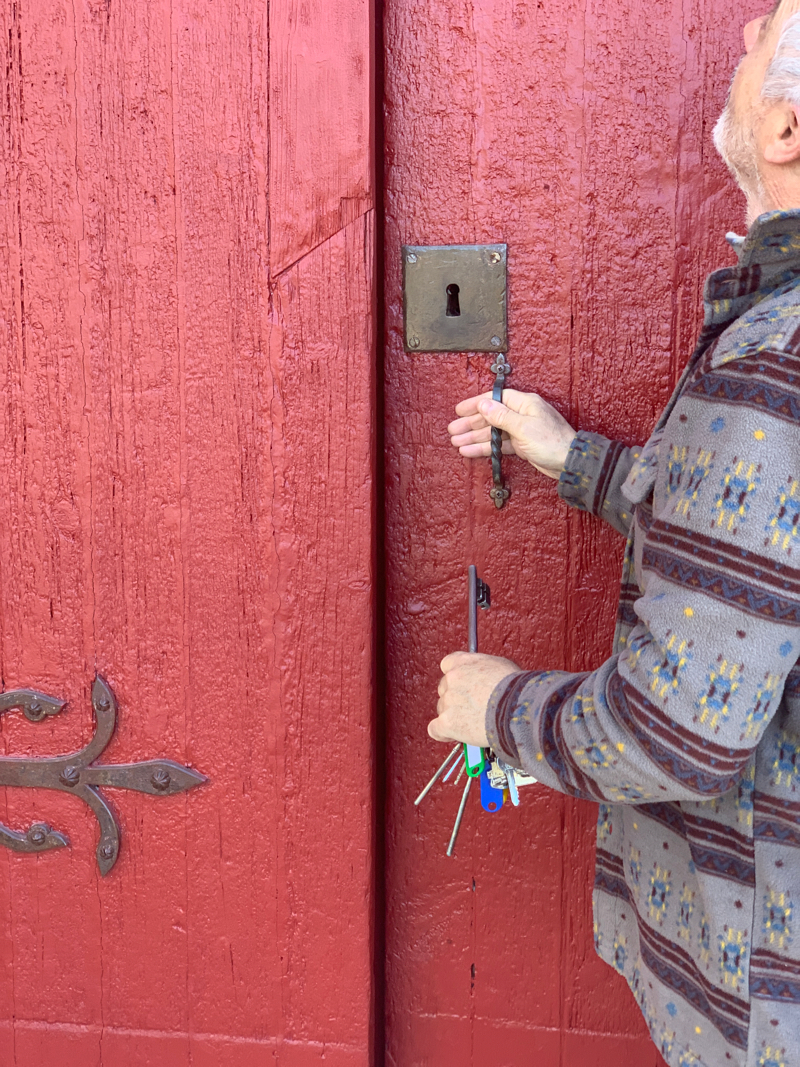 The former Cisterian monastery near La Roque d’ Anthéron dwells just a brief drive from the mother and daughter restaurant La Feniere in Cadenet. As one of the Michelin stared establishments in Provence and a cosy b&b, La Feniere is a restful foreplay to replenishing one’s mind at the Silvacane Abbey.

Spiritual treats of the abbey

As the keeper penetrated the giant key hole of the massive red door, twisting and squeaky the opening revealed a vast, minimalist purity of the chilly cathedral. Mesmerised, heads turning up to the tall vaults, we gently laid our soles in a mindful path towards the light in the front. The morning sun shone through the glass windows, inviting warmth and peace. As we approached closer to the sandstone altar, chanting records begun filling the air. The monks choir echoed in the bare space. Magic, even when the sacral songs were not live, we felt the vibration of the deep, masculine voices.
A solitary flower in a transparent vase whispered with more lucidity than any art piece in the Louvre. Without other visual distractions, she was luring us with her charms.
There were other wings to discover, and a provencal garden to marvel at.

The aesthetic pleasures of the Silvacane Abbey

Founded around 1144, the medieval Cisterian monastery is known in French as L’ Abbaye de Silvacane. Its Romanesque architecture with characteristic semi-circular arches and vaults supported by decorative columns plays with light and darkness. The massive walls let geometric fragments of coloured light inside through the arched windows. The reflections on the limestone are art in themselves. Transforming with the day, dying with night’s darkness. The basilica remains barely touched, yet some artists took over some wings as their play field, installing wondrous pieces inside. Contrasting or merging with the surroundings. 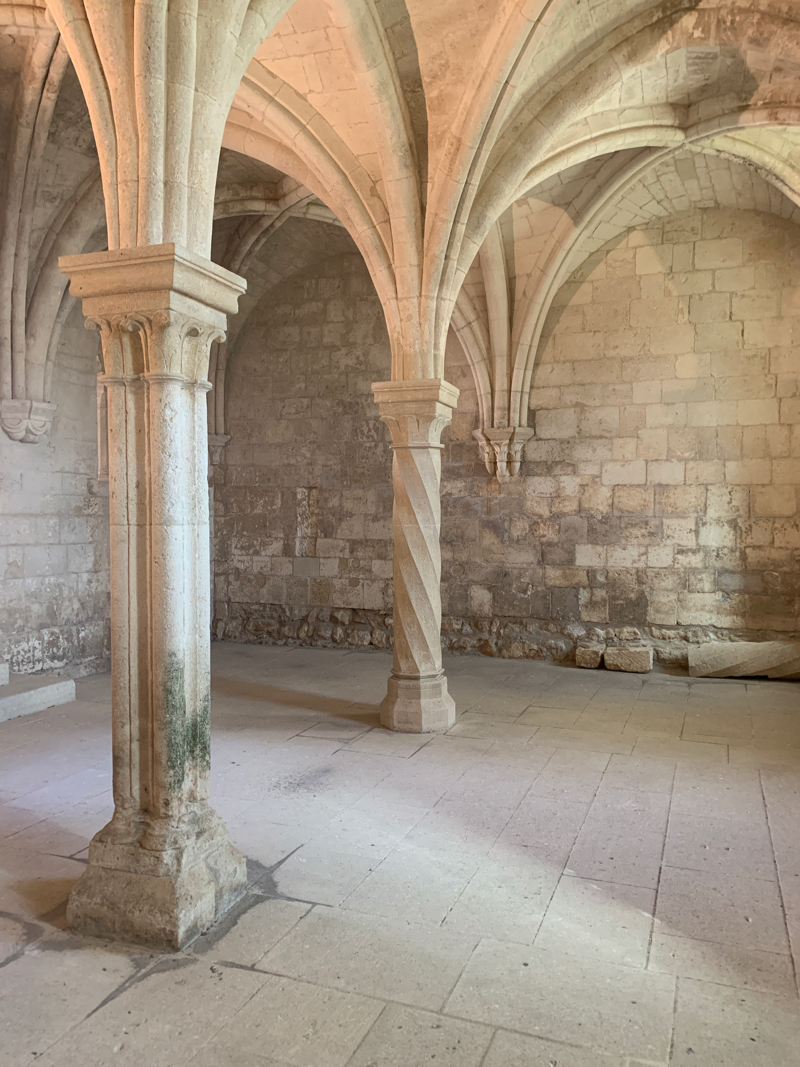 The French Revolution shook its purpose for a while, when the abbey became a farm. Savvily reconstructed by the French government in the 1990s, the Silvacane Abbey now nurtures creativity. Art exhibitions such as the most recent mirrors by Etienne Rey fill its throbs with contemporary imagination. I found them perfectly fit, respectful of the building’s heritage.

Etienne REY is a French visual artist, who lives and works in Marseille. He explores the notion of space. Screens, mirrors, displacement, illusion are his tools to shift your visual perception. In May, this showcase will be replaced by another French artists Laurent Corvaisier. Concerts and other cultural programs run regularly on the premises.

Descend. The lavender and rosemary gardens in the inner yard cast magic on your ear. In spring, the bird concerto energises the air with such a vigour that a double espresso would hardly match. I could not unglue myself from one of the arches embroidering the joyful scene. The natural elements are accentuated in the quiet space.
The Durance River banks literally brush the property, yet it was the burbling stream to the left of the abbey that echoed the zen calm of the mind. Other visitors started to stream in. Never mind. Once you fully focus on the other world your mind flows.
I walked on the dirt roads around towards the monk’s cemetery. Not much is there today, but orchards and trees attract the bees and birds. Humming and fully at work in spring, their mission was to awaken the world with fertility.

There is a limited parking just off the road near the entrance for your convenience. There are no trains or other direct public transport to the Silvacane Abbey. Guided visits daily in July and August (btw. 10:30am and 3:30pm), every Sunday from September to June (11am and at 2:30pm), upon request (8pax minimum). 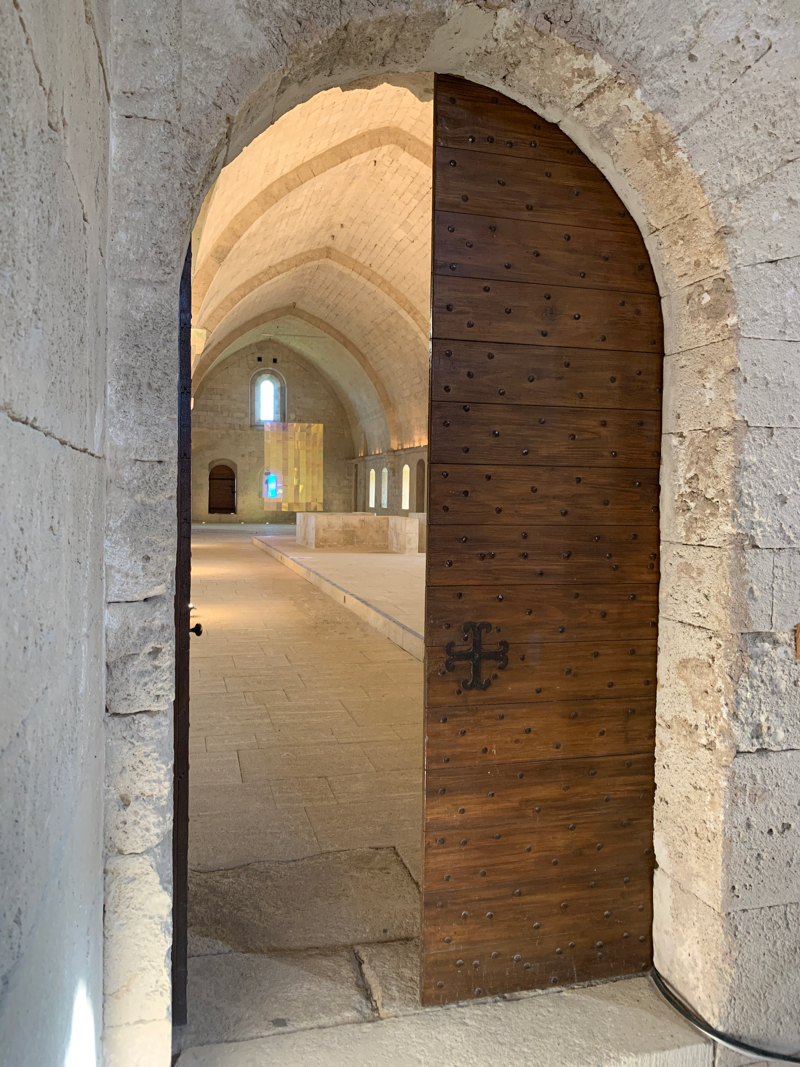 If you are hungry for more monastic beauty, drive further towards Lorgues to the Thoronet Abbey. The truffle region will also reward your palate. For a real celestial and gastronomic nourishment, just off the A8 Provençale near Brignoles, Alain Ducasse‘s Michelin restaurant cum luxury hotel literally rubs its walls with the Abbaye de la Celle. The vinous bounty and gastronomy of Luberon is also within the reach of the Silvacane Abbey, just keep heading North.
Read about its history on the Abbaye de Silvacane Wikipedia page.
RD 561, 13640 La Roque d’ Anthéron, France
+33 4 42 50 41 69
Daily except Monday
Off-season: 10am–1pm, 2–5pm; From April till 5:30pm; June-September open nonstop 10am-6pm.